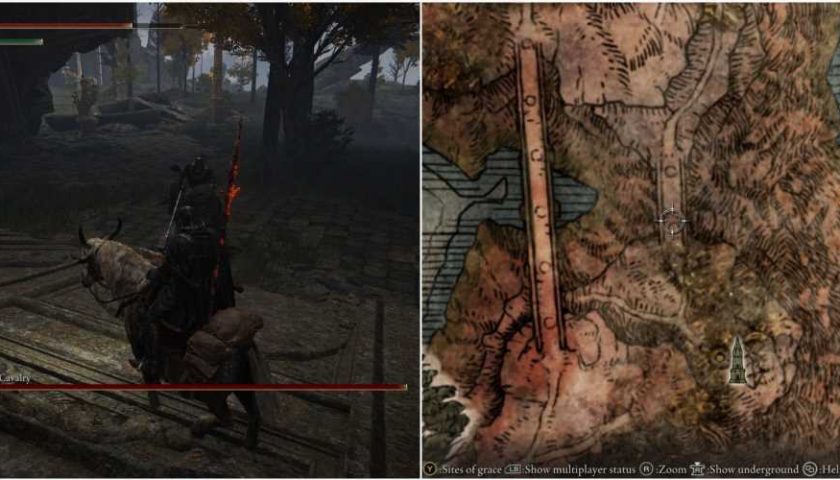 The main difference between Elden Ring and the Souls games' past entries is the gameplay format between boss battles. In past games, the actual world was pretty linear, with some small open areas that would always funnel you towards the area boss.

But Elden Ring follows in the footsteps of Breath of the Wild and presents a massive open world filled with enemies and even bosses. The Night's Calvary is one example of a boss that can be found roaming around in several places throughout the Lands Between. Though it can only be fought at night, defeating these bosses is worth your time.

Probably the first Night's Calvary you will run into is the boss that appears on the bridge near the Agheel Lake North site of grace, but only at night. Being the first one means learning how to fight them, and the Night's Calvary are no pushovers since they are both powerful and challenging.

Their horses also have separate health bars which means that you can kill their mounts before you kill them separately, if lucky. This will knock them to the ground and leave them open for a critical attack. The Night's Calvary in Limgrave will drop a useful Ash of War, Repeating Thrust, and 2,400 Runes.

This Night's Calvary features a different weapon than the previous, wielding instead a flail that has less range but deals more overall damage. The closest site of grace to this one is the Castle Morne Rampart, which is right next to one of the many nomadic merchants.

Since they are on horseback, most people will probably mirror him and try to fight the Night's Calvary on horseback. Remember, however, to jump off and get a critical attack if you can – knock them off their horse for extra damage. The Night's Calvary here drops the Ash of War Barricade Shield and the Nightrider Flail.

The strategy to fight this mini-boss does not vary much, though there are quite a few ways to fight them based on your personal taste. The Night's Calvary is closest to the Bellum Church site of grace and is down south near the Raya Lucaria Bridge.

One strategy for those who prefer colossal weapons is to charge a heavy attack while riding towards the Night's Calvary and then ride away after striking it. So kind of like jousting. This field boss drops the Nightrider Glaive and the Giant Hunt Ash of War, both of which are extremely powerful.

As previously stated, fighting on horseback is generally a good idea to keep up with their speed, but it is wise to follow them if they are knocked to the ground. One way to hit the Night's Calvary off their horses other than defeating the steed, is to parry them.

This will leave them in a critical state on the ground, just like when you kill their horse. This feature is actually shared by most horseback enemies in Elden Ring, so it is good to keep it in mind. The Night's Calvary here is located near the Gate Town Bridge and drops the Ash of War Ice Spear.

The most challenging part of fighting Night's Calvary field bosses is their aggressive fighting style. This is exacerbated by their proclivity to stay on horseback most of the time; they will even resummon their horse if left alone for too long after it is killed with a big area of effect attack.

As with many opponents in Elden Ring, it is better to copy their aggression to deal damage while weaving through attacks, even on horseback, since the high damage they do will render defensive play less rewarding than aggressive styles. This Night's Calvary is closest to the Caelid Highway site of grace and drops the Poison Moth Flight Ash of War.

One thing that many of the Night's Calvary field bosses have in common is their somewhat close proximity battles. There are multiple fights against these enemies on bridges, which is made even more dangerous since they're on horseback.

This does, however, leave room for a potential ace in the hole for you. That is that they can accidentally fall off a bridge, though it is very tricky to get them to do so. Either way, you kill them, and the Night's Calvary here on the bridge next to Lenne's Rise will drop the super popular Ash of War Bloodhound's Step and a ton of Runes.

After making your way to the Altus Plateau, you should be prepared for some of the most difficult battles in Elden Ring. This fight could be one if you struggle with horseback combat in Elden Ring, but the number of options available for fighting the Night's Calvary, and any foe for that matter, like ranged weapons, should make it possible for anyone to triumph.

If you find horseback combat too hard, on-foot fighting should give you plenty of room to deal damage to the Night's Calvary in between their attacks, though you may have to wait for them to come to you since they are quite a bit faster than you. This mini-boss is closest to the Altus Highway Junction site of grace and drops the Shared Order Ash of War.

This Night's Calvary is potentially the hardest one in Elden Ring. This is mostly due to the cramped terrain you fight him around, but also because the dreaded militiamen enemies cover the entire area, ready to jump you. And with the damage they deal, their small stature should not be taken lightly.

Whether you clear the area first or take on the Night's Calvary along with the enemies in the area, this one is liable to be especially difficult. Though it is especially worth it as it rewards you with the Phantom Slash Ash of War, which is as cool as it is powerful. This Night's Calvary is located along the main path of the Forbidden Lands, just after the Lift.

These Night's Calvary encounters are probably harder than the previous ones, not because they feature radically different attacks or anything, but mostly because they have an entourage of enemies surrounding them. Oh yeah, there are also two of them that you need to kill without dying at all.

The good news is that you can employ lures and fight them separately, but make sure to kill them both in one life to get the reward. And rewarding it is, since you get not only an Ancient Dragon Smithing Stone that allows you to fully upgrade a weapon but a Night's Calvary Armor set. These field bosses can be found near the Inner Consecrated Snowfield site of grace in a caravan.