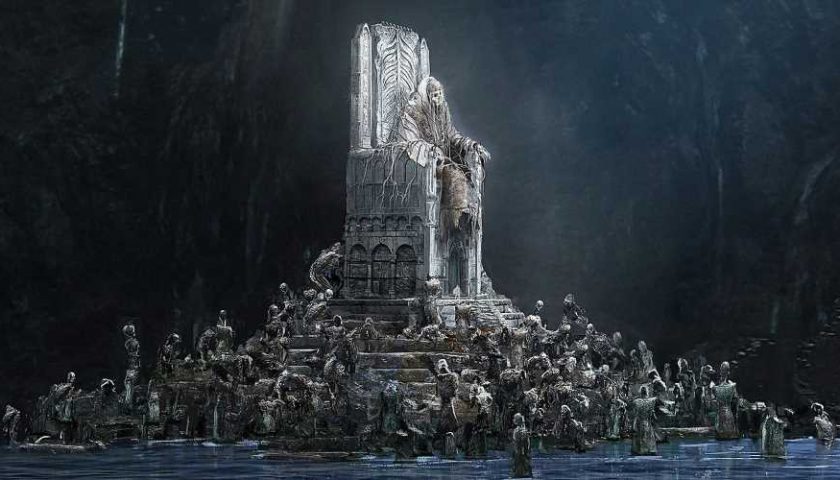 Elden Ring secrets come in all shapes and sizes. Some are invisible to the human eye, and require a talented dataminer like Zullie the Witch to dive into the source code to uncover them. Others are well hidden and require a lot of exploration to untangle. And then there are those which are right there in front of you, looming larger than life. Kind of like those huge fuck-off skeletons you can find sitting on massive underground thrones.

The skeletons just sit there motionless and mysterious. Even though they're such massive set pieces, Elden Ring tells us nothing about them. And so, it's once again up to Zullie the Witch to uncover their secrets.

The dataminer opens with the skeletons' relation to the Nox, as they're found in both Nokstella and Nokron, so learning more about their goals could uncover more. The Nox, after their banishment to the underground, sought to find or even create a leader of their own. The description in the Nox armour mentions the return of a Lord of Night – which in the Japanese text could also be written as Night King.

The term Night King is also connected to another enemy in Elden Ring – it can be found in the AI and internal label of the Tibia Mariners. The Japanese name for the Mariners according to Zullie, can loosely be written as "Night King's Kin" – so, the Nox, the skeletons, and the Mariners are all connected in a way. Zullie also notes that the Mariners can summon giant skeletons which are roughly the size of the ones found underground.

So, based on all of this, just who is the Night King? Zullie theorizes that there are a few likely candidates. Considering the Mariners bear his Deathroot, Godwyn, Prince of Death is one viable candidate. The Nox armour description, however, implies a link between the Night King and the Age of Stars, pointing towards Ranni. Her name also means 'Queen' in a number of languages – Night Queen, perhaps?

Lastly, the Night King could also be a nod to George R.R. Martin's contribution toward the game's lore, referencing the Night King from Game of Thrones.