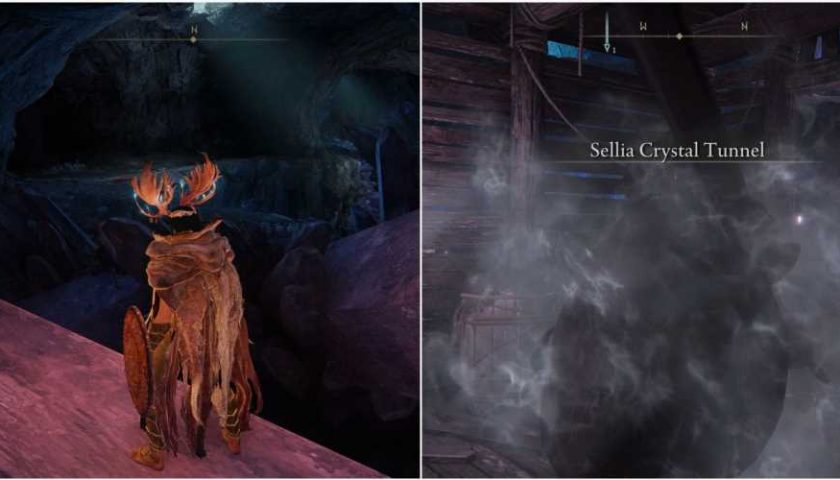 One of the great new things that Elden Ring brings to the Souls game formula is mini-dungeons in the form of catacombs. Similar to Bloodborne's Chalice Dungeons, the catacombs scattered across the open world of Elden Ring contain scaled-down versions of the classic Souls dungeons.

Caelid is one of Elden Rings' more memorable areas, due to the difficult enemies and freaky landscape. Usually, caves are fairly basic looking, but the Abandoned Cave doubles down on many of Caelid's features in a way that makes clearing this catacomb extremely satisfying.

The cave has mini rot swamps and enemies all around that inflict the rot and poison statuses upon you, so it is recommended to stock up on boluses beforehand to cure them. The boss also inflicts this scarlet rot, but the rune-boosting Golden Scarab talisman you receive for killing them is well worth the challenge.

This catacomb is actually hidden behind an illusory wall and is also located in the Caelid area, past the Church of the Plague site of grace. There are a number of illusory walls in this catacomb, so smack any walls that you think look fishy, but look out for the minor enemies strewn about.

Deeper into Sellia Hideaway, you will find a platforming challenge similar to Seath's crystals in Dark Souls, though the addition of the jump button makes for added complexity. The boss of this area is quite difficult, so it is recommended to make use of blunt weapons when fighting them to cut down on the challenge.

Yelough Anix Tunnel is located in the Consecrated Snowfield, deep into the late game of Elden Ring. This is another unique catacomb, in this case taking the appearance of a mine that has frozen over. The enemies reflect this cold theme as some of them look as if they have frozen to death before ambushing you.

The ice-covered walls are especially claustrophobic, and this is only exacerbated by the knowledge that there could be enemies around every corner. The boss here is a refight against Astel from the Ranni quest line, though it does have increased damage and is therefore a more difficult variation.

You must complete the majority of the Mountaintops of the Giants area to access Giant-Conquering Hero's Grave. The main gimmick of this catacomb is that the enemies are invincible until they are led into the circles of light scattered around the dungeon, making combat more cerebral than usual.

Eventually, the true difficulty becomes apparent when you come across an invincible giant, but there is no circle of light to be found. Solving the puzzles in this catacomb definitely requires ingenuity, but the boss is a pretty straightforward send-off to what is an interesting and fun challenge.

Many of the catacombs throughout the open world of Elden Ring recycle environments and are more interesting in regards to their combat rather than their exploration. The standouts are definitely the ones like Gaol cave, in which there are a ton of locked cells that you must unlock to make your way to the boss.

The best part about Gaol cave is its labyrinthian design with its many twisting hallways and cells that you must backtrack to after opening the jail cells deep within the cave. This is one catacomb to take your time with and enjoy exploring, but also take caution as many of the jail cells hold dangerous enemies.

This catacomb may have been your first journey into the dungeons of Elden Ring, though likely not by choice. A teleportation chest in the very early areas in Limgrave will send you to the Sellia Crystal Tunnel, where most players will be repeatedly killed until they can find a way to get to the site of grace.

It is definitely smarter to leave this tunnel for later, but the difficulty here, even when of the appropriate level, is still vast. The pest enemies scattered about have devastating ranged damage and there are a lot of them. The boss is a real doozy too, so truly do not feel bad about coming back later if you get tricked into teleporting here.

The War-Dead Catacombs are especially interesting in that the catacomb is located within the boss arena where you fight Starscouge Radahn. Once you defeat him, these ruins are found on the far side of his boss zone against the cliff. The crypt is very lore-appropriate for the fight that just took place as well.

Locked in eternal combat within are the ghosts of General Radahn's and Malenia's armies. Unfortunately for you, both armies are hostile to you, but the good news is that they will also fight each other. Once you defeat these long-dead soldiers, you are treated to one of Elden Ring's many fights against the Putrid Tree Spirit.

This area features a number of standout dungeon ideas. The classic skeleton revival mechanic from Souls games makes an appearance, in which you must kill the summoner to defeat their summoned bony warriors. The Black Knife Catacombs also require you to ride up one of the trap guillotines to get to a higher area to progress.

As the dungeon's name implies, there is a fight against a Black Knife Assassin here, located behind an illusory wall, but there is also another boss fight. The other fight is pretty average compared to the Assassin, but you are rewarded with a Deathroot which is fairly rare.

Like many of the best dungeons in Elden Ring, the Auriza Side Tomb has an interesting gimmick that sets it apart from the rest. In this catacomb, you must open teleport chests to send you to another version of the tomb. You must travel back and forth to progress to the boss.

The difficulty is that the areas are identical, making it hard to distinguish which chest should be taken, and where to go once teleported. There are also lots of everyone's favorite enemies here, the Giant Living Jars, that make the challenge of this dungeon more than just a puzzle.

This catacomb is reminiscent of a certain horror game demo in that it repeats its layout seemingly forever. As you make your way through the Leyndell Catacombs you may eventually realize that it is starting to repeat, even so far as enemies taking note of your kills on previous loops of the dungeon.

Rest assured, this is one dungeon and there are no loops occurring. In reality, the dungeon is a massive continuous pathway that drops you into a very similar layout dungeon at the end of each path. You must look very carefully to find the way forward, so be super thorough with this one, and you should eventually conquer the Leyndell Catacombs.