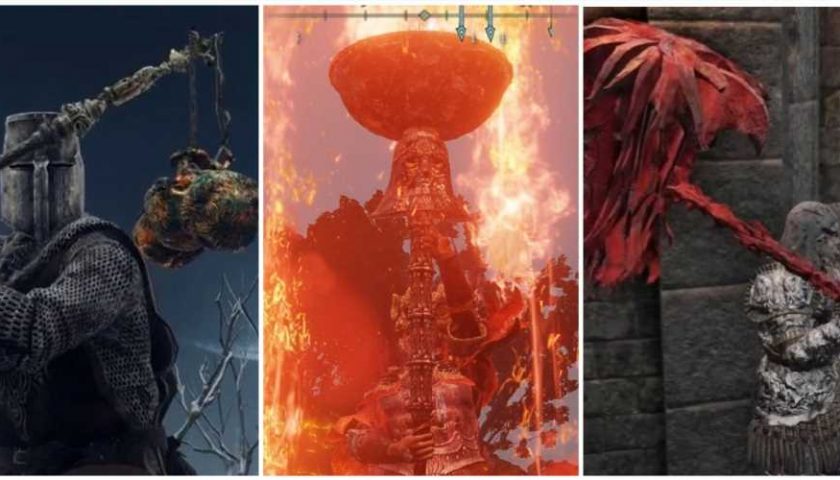 One of Elden Ring’s best features is its massive selection of epic weapons. The best playstyle and weapon type for you is simply a matter of preference, but if you’re looking to beat your enemies to a pulp with a blunt object, there are some great hammers, staves, and maces to discover in The Lands Between.

Of course, some of these blunt weapons are better than others, and some, like the Giant Crusher, have massive stat requirements to go with them. But since Elden Ring allows you to optimize your build based on your weapon, having a selection of weapons to choose from is a great way to improve your gameplay.

While it might not be much to look at, the Large Club is an early-game weapon that you can keep using well into mid or late-game. It’s easy to acquire and lightweight enough for use with a hefty shield—and of course, gives you the satisfaction of beating your foes with a big stick.

It can be found on the southernmost cliff of Forlorn Hound Evergaol, and works best with a strength or strength-hybrid build. Its Barbaric Roar weapon skill gives you a ten percent buff to attack rating, and changes your heavy attack into a three-hit combo. 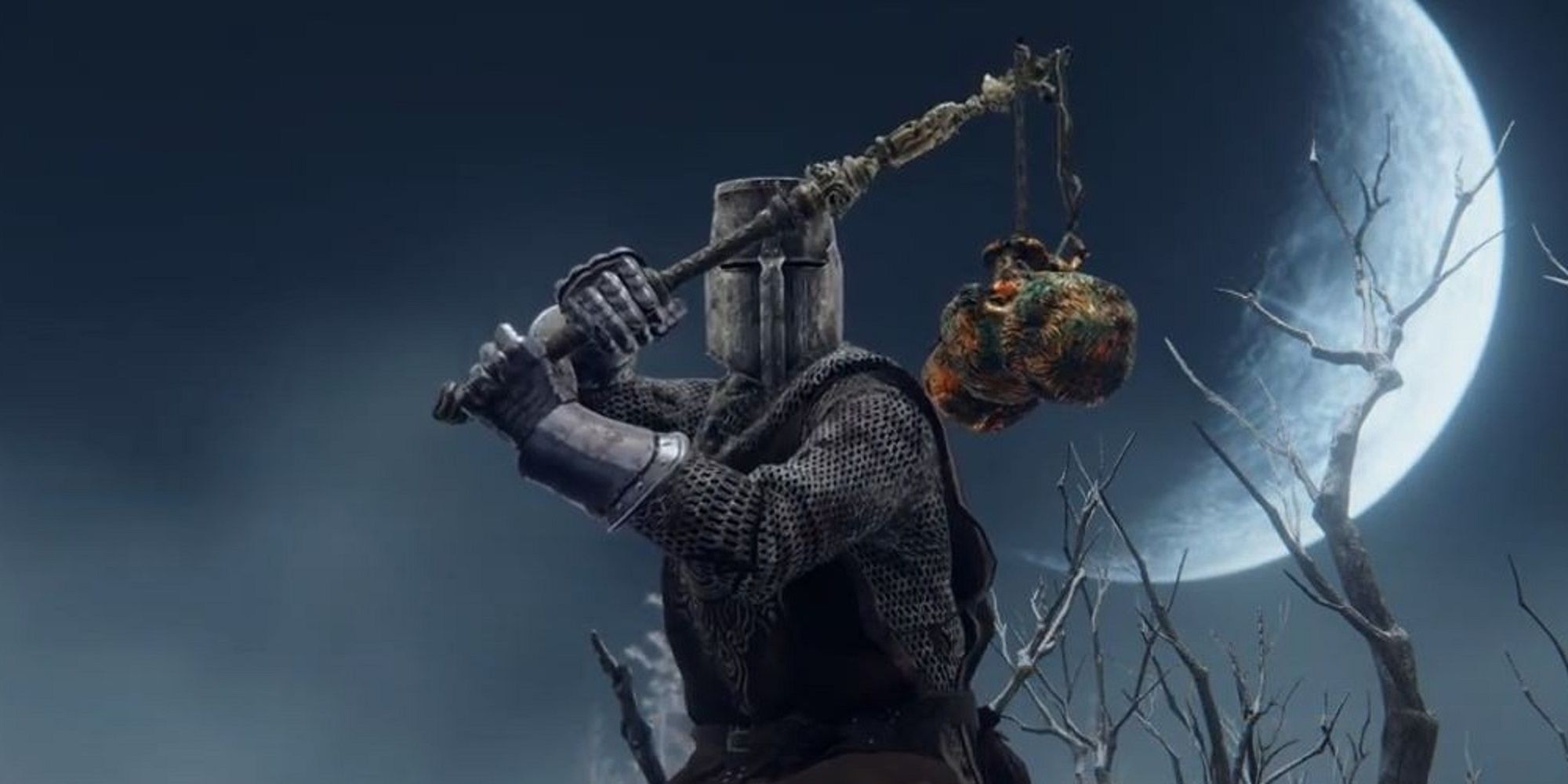 Want to pummel your enemies with heads on a stick? Pick up the Family Heads flail by killing Necromancer Garris at Sage’s Cave in Altus Plateau. Although you won’t be able to infuse it with an Ashes of War ability, its unique weapon skill is among the coolest in the game. Casting Familiar Rancor summons ghostly spirits that chase down your enemies.

The Family Heads flail can be acquired early on and is ideal for dexterity-based characters who plan to move into a dexterity-intelligence or dexterity-strength hybrid setup.

Found on a body in Giant-Conquering Hero's Grave, the Cranial Vessel Candlestand allows you to kill enemies in a rain of fire by using its Surge of Faith weapon skill. This ability can be chain casted as long as you have enough stamina and focus points to do so, making it an excellent choice for both PvP and long boss battles.

The Cranial Vessel Candlestand puts out impressive damage with most high-strength builds, but is especially suited to strength-faith hybrids. 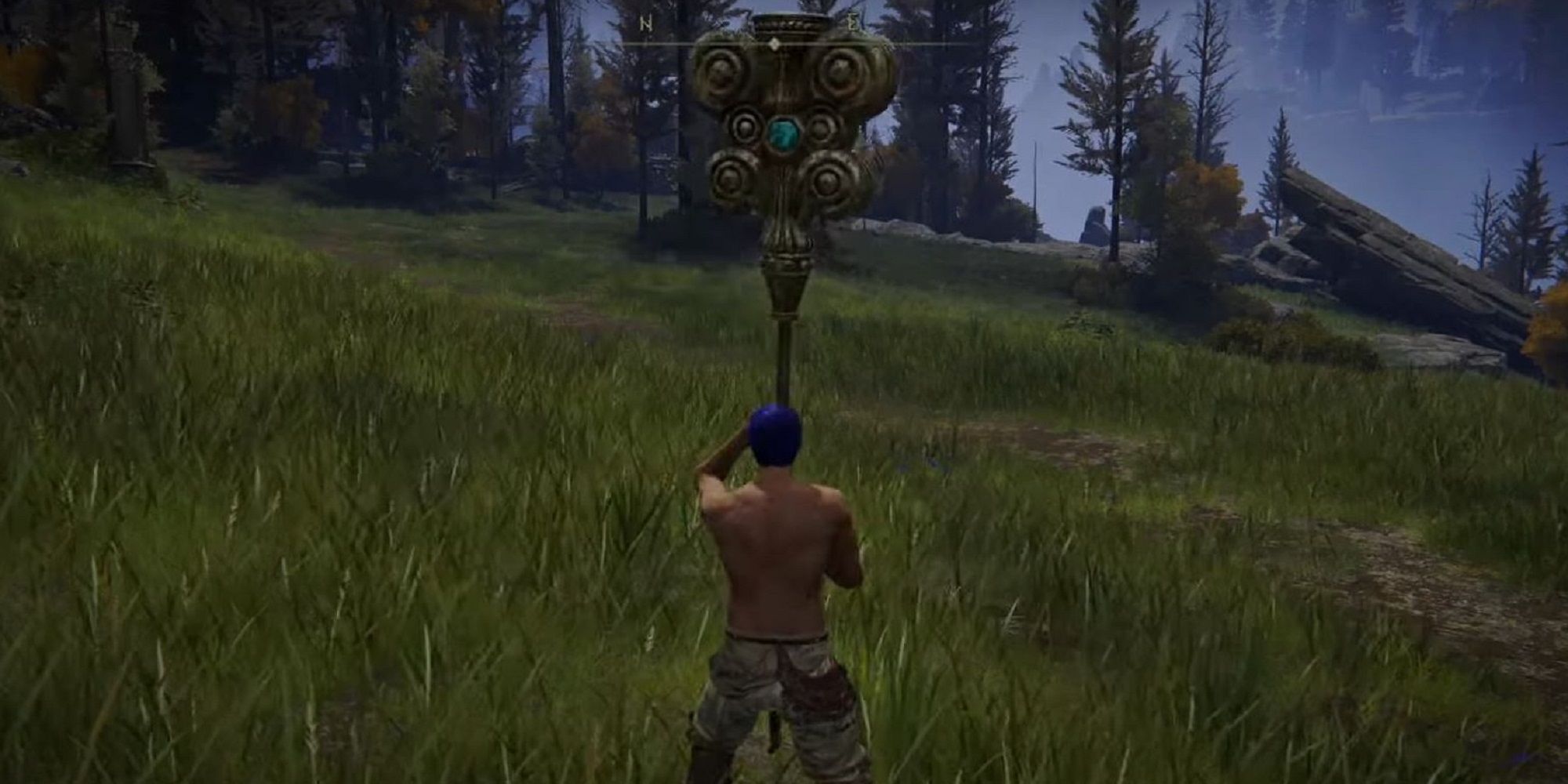 An early-game weapon found in the Road’s End Catacombs on the western edge of Liurnia of the Lakes, the Watchdog Staff is best for quality or pure strength builds. Unlike most staves, it doesn’t have an intelligence requirement, making it a viable option if you want to add a little magic to your strength-based character.

The weapon only has C-scaling in strength when fully upgraded, but it makes up for that with a powerful Ashes of War ability called Sorcery of the Crozier. When used, this ability puts out a ring of magic orbs that home in on your target to deal massive damage. 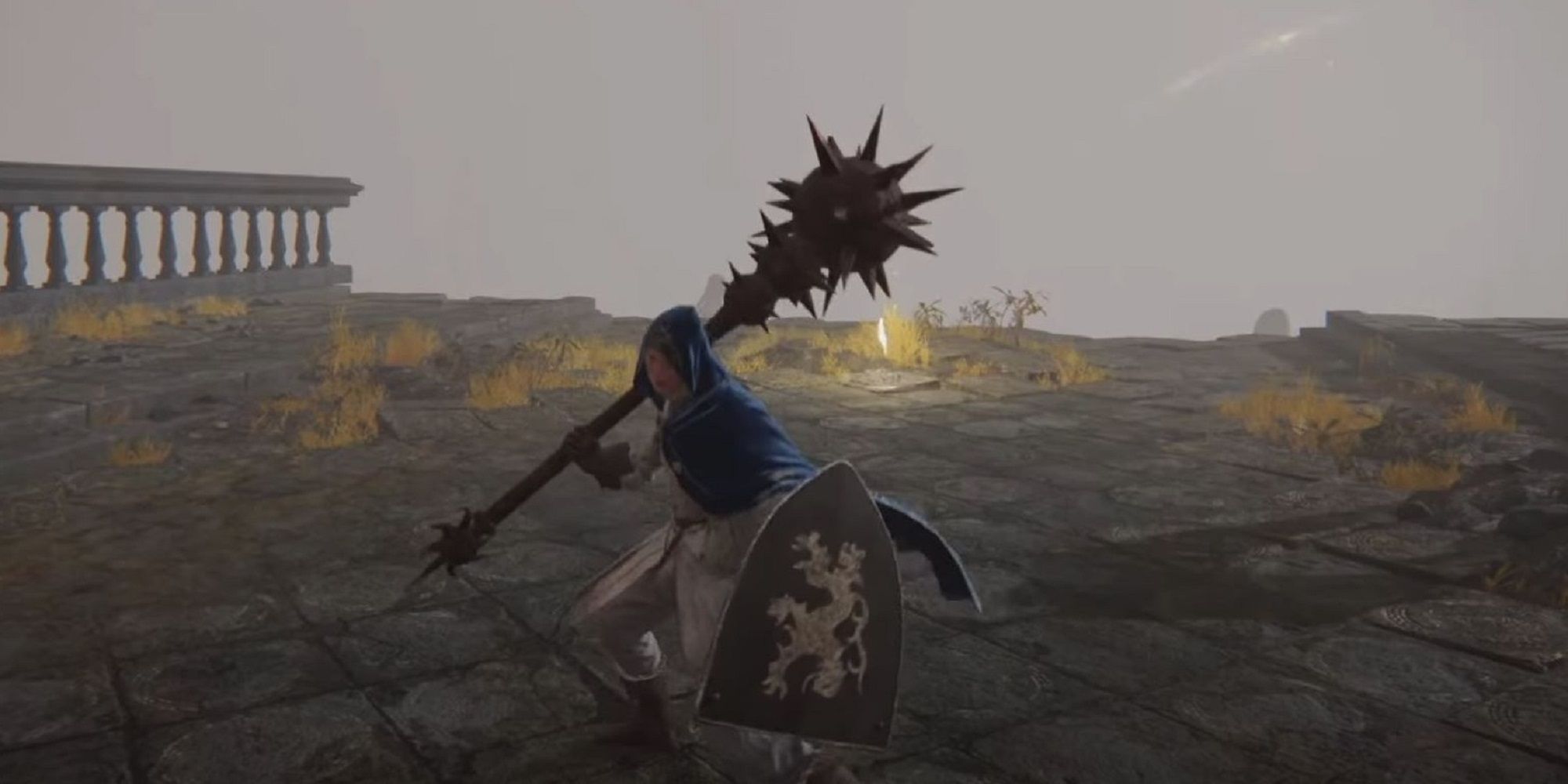 Another excellent option for strength-based builds, Great Stars is a great hammer that’s versatile enough for hybrid builds but gains A-scaling in strength when fully upgraded and combined with Heavy Ashes of War. It allows you to block damage with the Endure weapon skill, causes damage-over-time with Blood Loss, and restores a percentage of your health with every hit, even when your attack is blocked.

Great Stars can be found in Altus Plateau, to the southwest of the Road of Iniquity Side Path site of grace. Just look for two trolls towing a carriage. 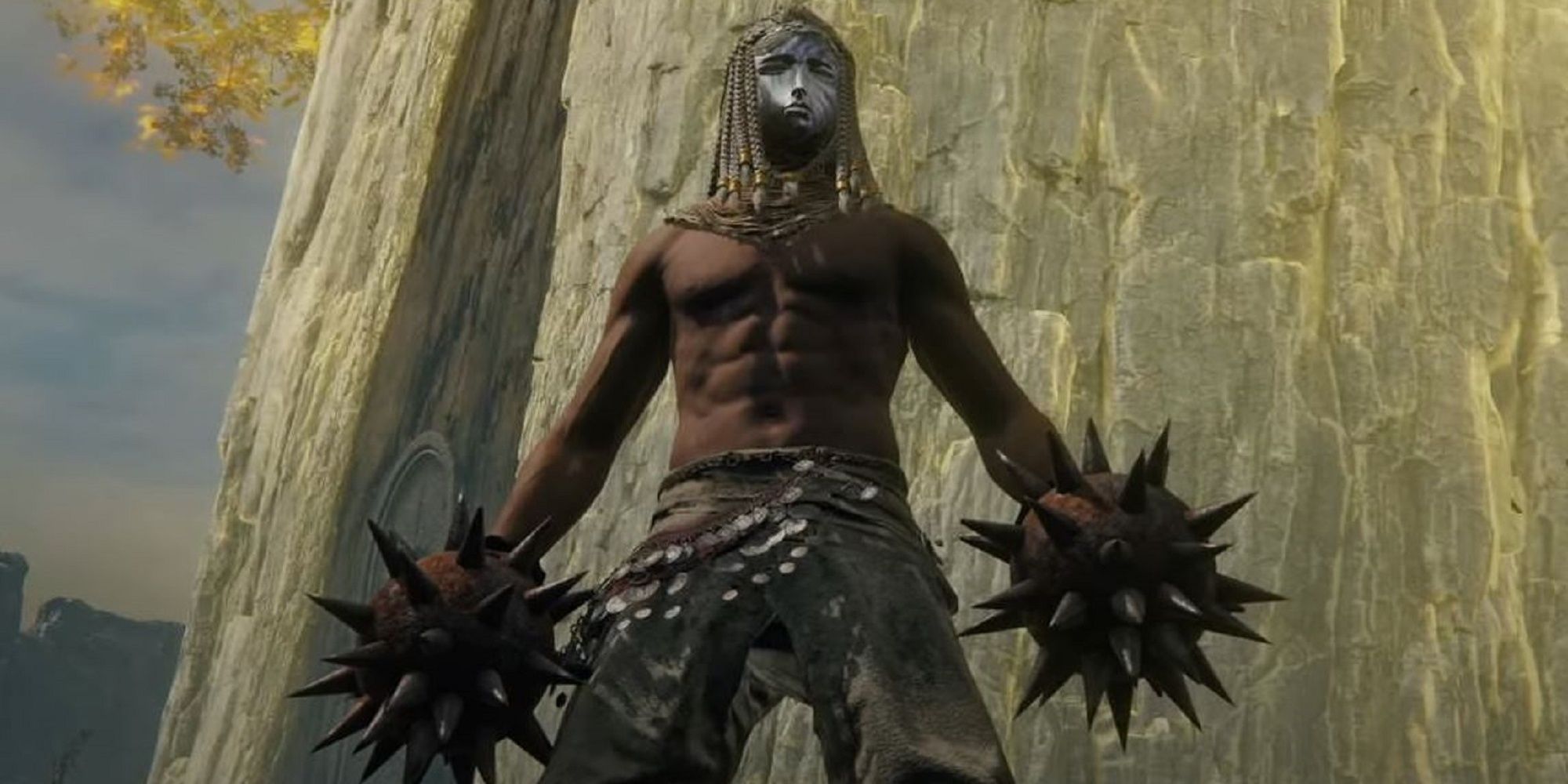 If you want to bash your foes with your fists, the Star Fist is exactly what it sounds like—a sphere-shaped iron glove covered in spikes. Ideal for strength and strength-hybrid builds, it inflicts the Blood Loss status effect, making a great pick if you’re a fan of PvP.

It can be found on a body in the Leyndell, Royal Capital dungeon and uses the Endure Ashes of War ability to grant increased absorption and poise, and reduce incoming damage. It’s worth noting that using one of these weapons on each hand does more damage than two-handing a single Star Fist. 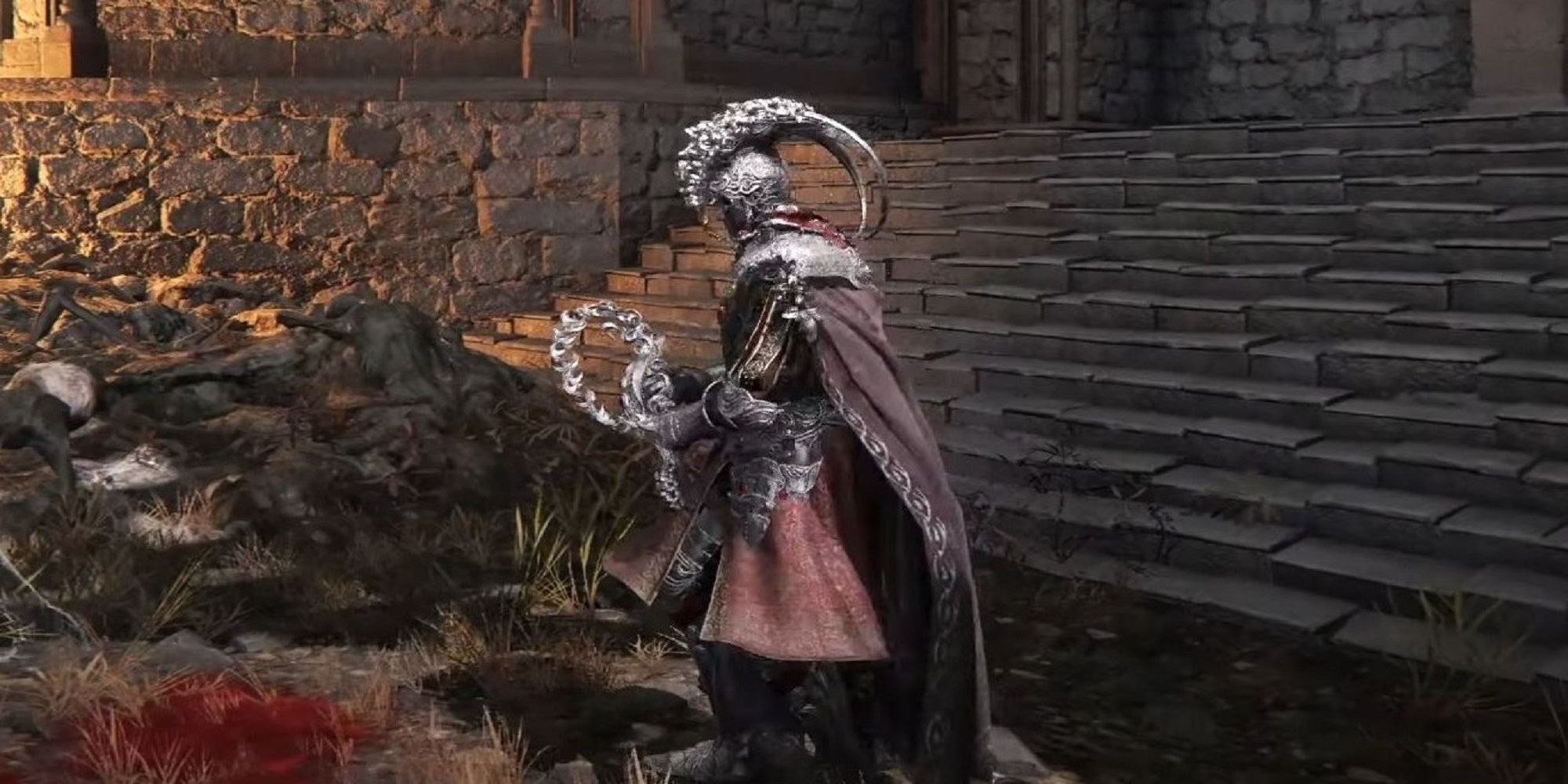 If you’re looking for a blunt weapon that can be used with a dexterity build, Hoslow’s Petal Whip is a guaranteed drop from Juno Hoslow during the final part of the Volcanic Manor questline. Not only does it deliver the blood loss debuff to do substantial damage in either PvE or PvP, but its Kick ability also knocks back enemies and helps you escape incoming damage.

If that’s not enough for you, it might be one of the most painful-looking weapons in the game, made up of a series of linked, razor-sharp blades in the shape of flower petals. Although it’s best suited for a pure dexterity build, Hoslow’s Petal Whip is also a viable option for dexterity-arcane or dexterity-intelligence hybrid characters. 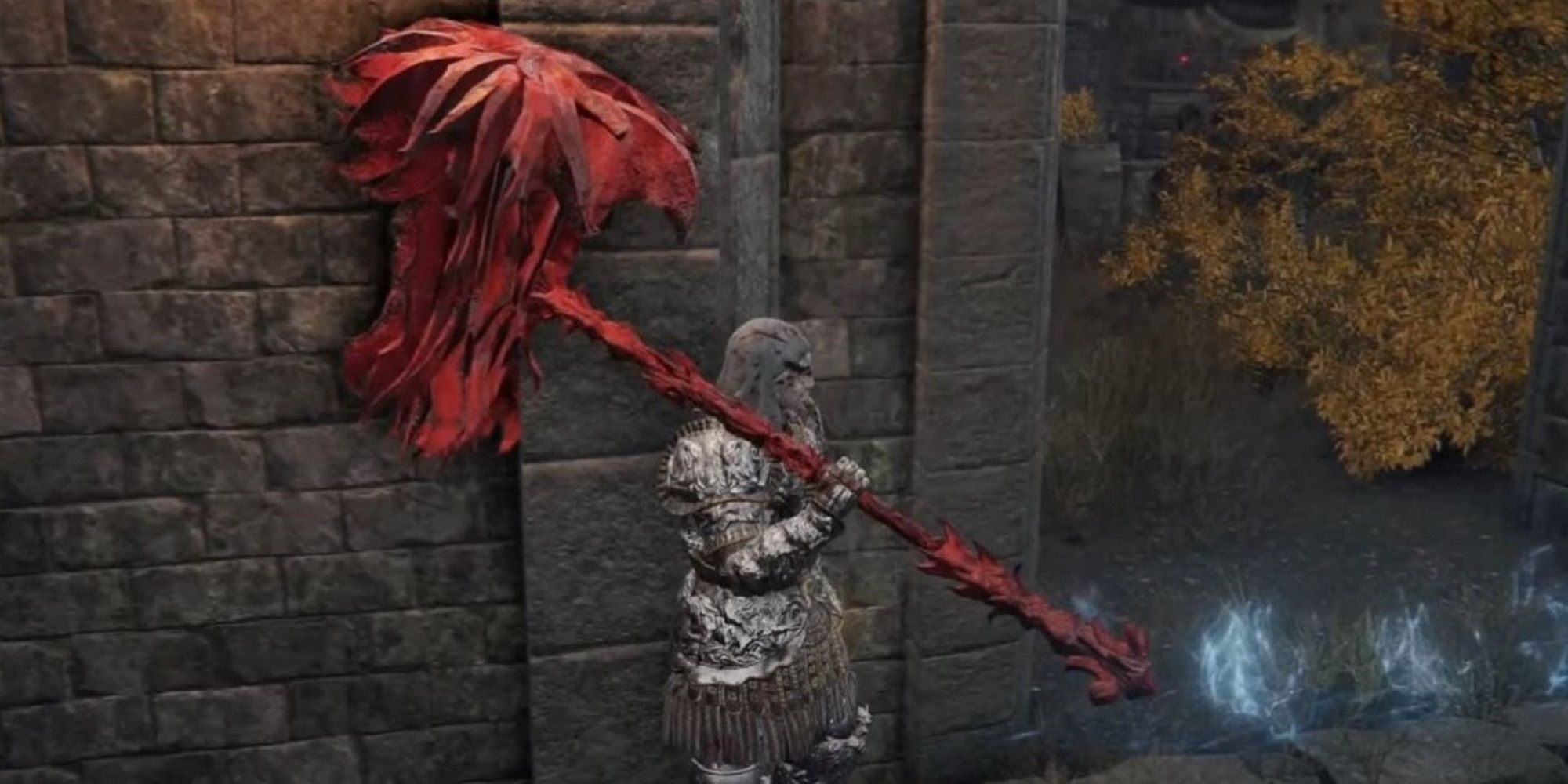 Reminiscent of Smough’s Hammer from Dark Souls, the Prelate’s Inferno Crozier is a guaranteed drop from the Fire Prelate inside Fort Laiedd. A mid-game weapon that works best with quality, strength, or strength-faith hybrid builds, it earns an A-scaling in strength when fully upgraded.

It does less poise damage than most other blunt colossal weapons, but benefits from its charged attack that launches enemies into the air—a great way to prevent incoming damage. When its Ashes of War weapon skill, Prelate’s Charge, is used, you’ll smash the weapon into the ground to create a path of flames, doing area-of-effect fire damage to any enemies in its path. 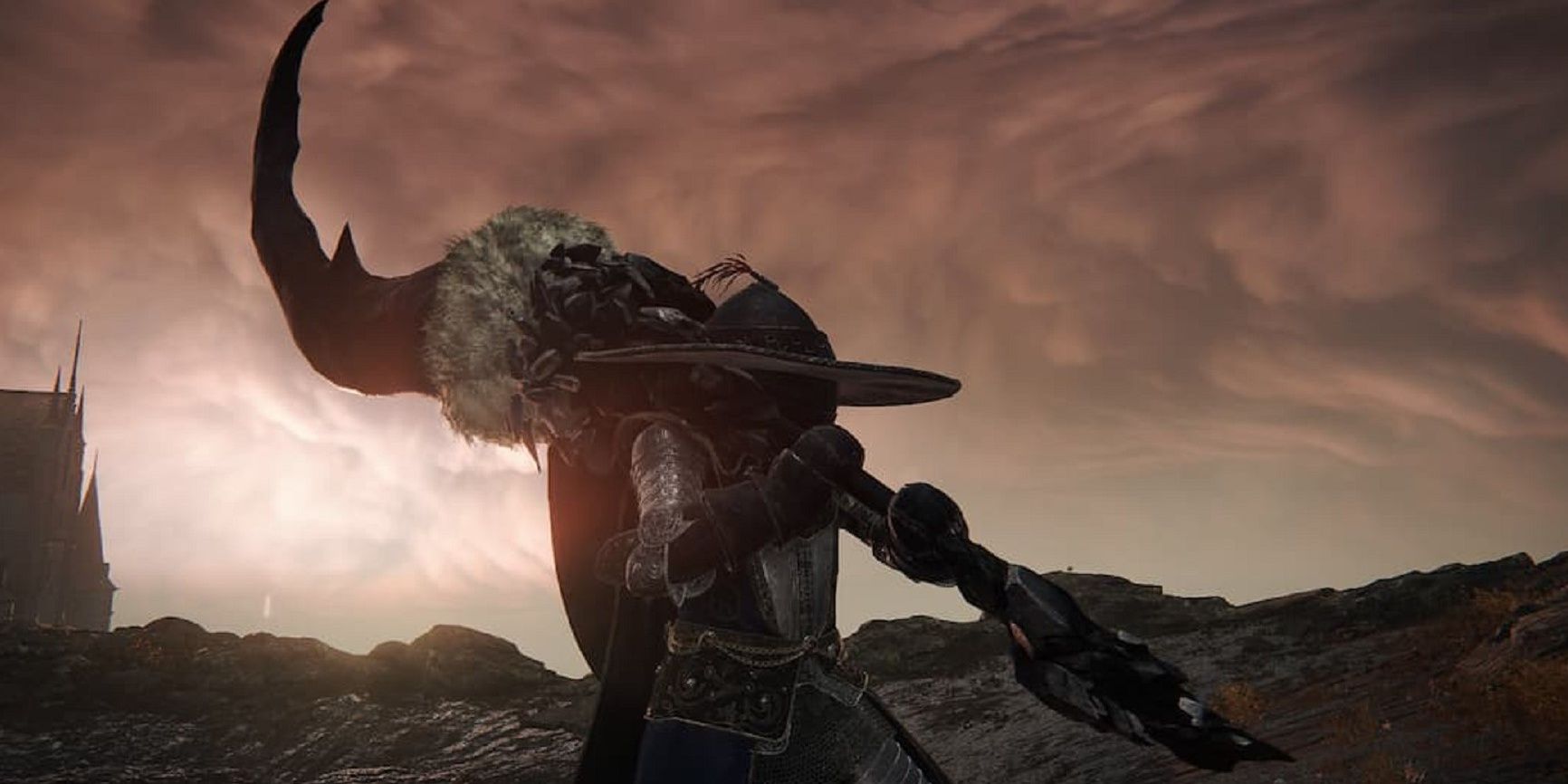 Dropped by the Full-Grown Fallingstar Beast in Mt. Gelmir, the Fallingstar Beast Jaw looks as fantastically creepy as it sounds. This mid-game weapon goes best with a quality or intelligence-hybrid build, and is especially effective against gravity-type enemies.

Gravity Bolt, its Ashes of War special ability, does a tremendous amount of poise damage that can stagger enemies, including bosses, in just three hits. This stagger also makes it immensely powerful in PvP, allowing you to destroy another player while preventing them from fighting back. 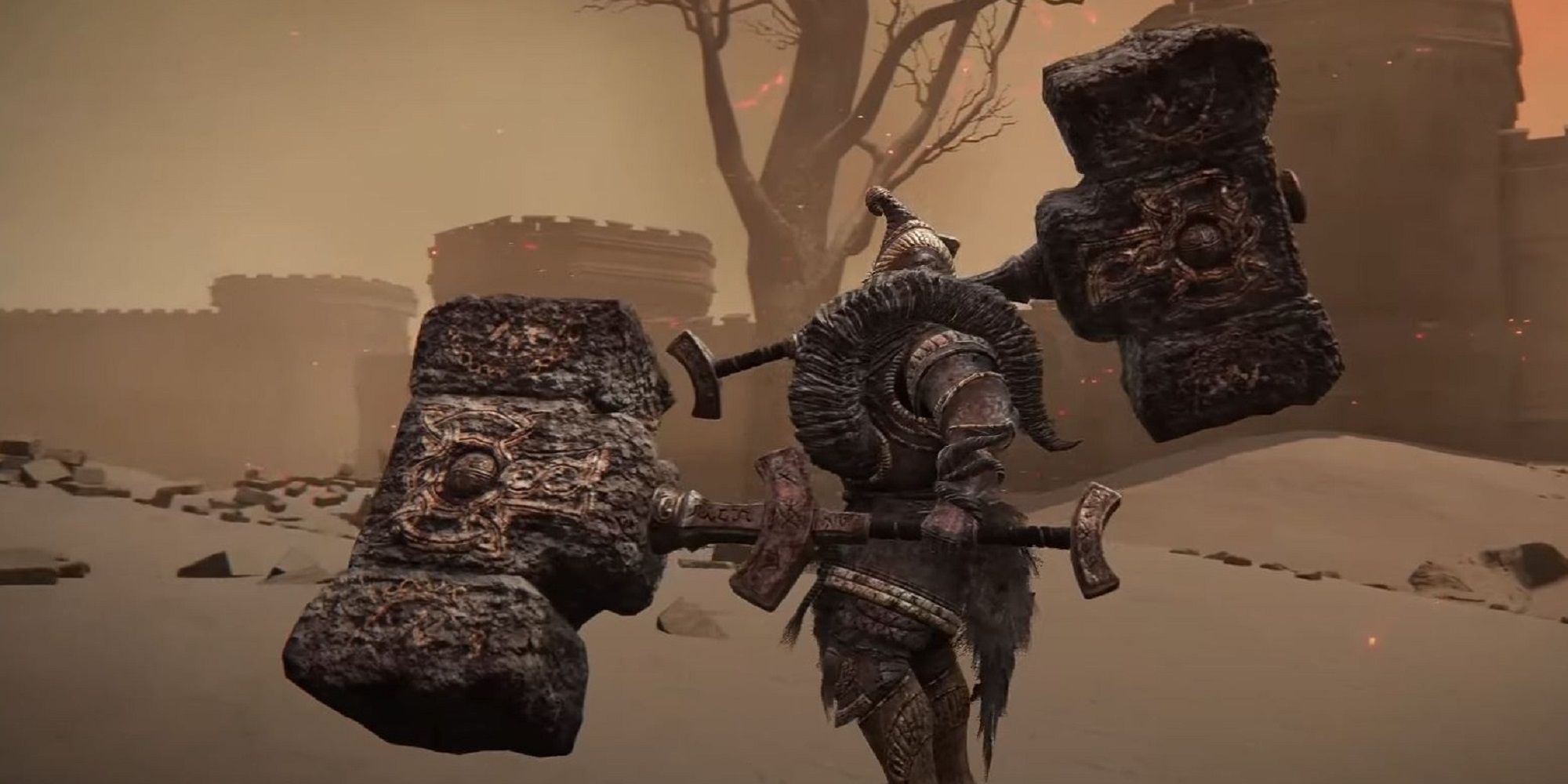 Bigger is better when it comes to the Giant Crusher in Elden Ring. This mammoth-sized hammer that can be wielded with either one or two hands, is located south of the Outer Wall Phantom Tree site of grace in a hearse. One of only a few weapons to earn S-scaling in strength when fully upgraded, the Giant Crusher requires a full-strength build to use.

Easily one of the most powerful weapons in the entire game, not only does it deal monumental damage, but its Endure Ashes of War ability offers a three-second buff that gives a 45 percent increase to absorption making it highly effective at blocking damage from powerful boss attacks.