The only thing better than seeing a powerful attack in Dragon Ball is using that very same attack yourself. In recent years, Dragon Ball videogame franchises, like the Budokai Tenkaichi and Xenoverse series, have given fans the chance to play as some of their favorite heroes and villains while having access to some of their strongest moves.

While many of these attacks stay true to the show, others were made exclusively for the games. Whether it’s because the actual character in the show didn’t get the chance to demonstrate their full capabilities or that the move had to be invented just to occupy an extra skill slot for any given character, there are some truly stunning moves in Dragon Ball games that we haven’t (and probably never will) see in either the anime or the manga. 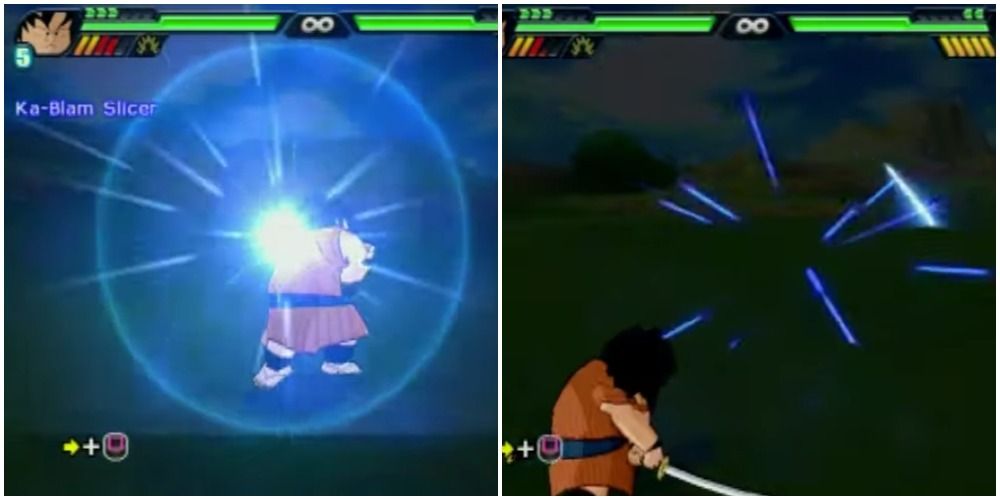 Many fans forget Yajirobe’s last major moment of glory, in which he cut off Vegeta’s tail, forever rendering him unable to transform into a Great Ape. After that, he was essentially reduced to Korin’s Senzu Bean delivery boy (which he seems content with). We have to admit though, his ability to eat unlimited Senzus and unleash rush attacks even on giant characters in the Budokai Tenkaichi series makes him a competitive character in the hands of a smart player.

One of his blasts, the Ka-Blam Slicer, generates a fast-moving crescent of ki towards an opponent from his sword. Not only does it travel fast, but it can’t be blocked, which could win him the match if his opponent thinks that this attack can be guarded. While it’s not as flashy as some of the other attacks on this list, it gets the job done, and we never thought Yajirobe would have such a killer move in any Dragon Ball game. 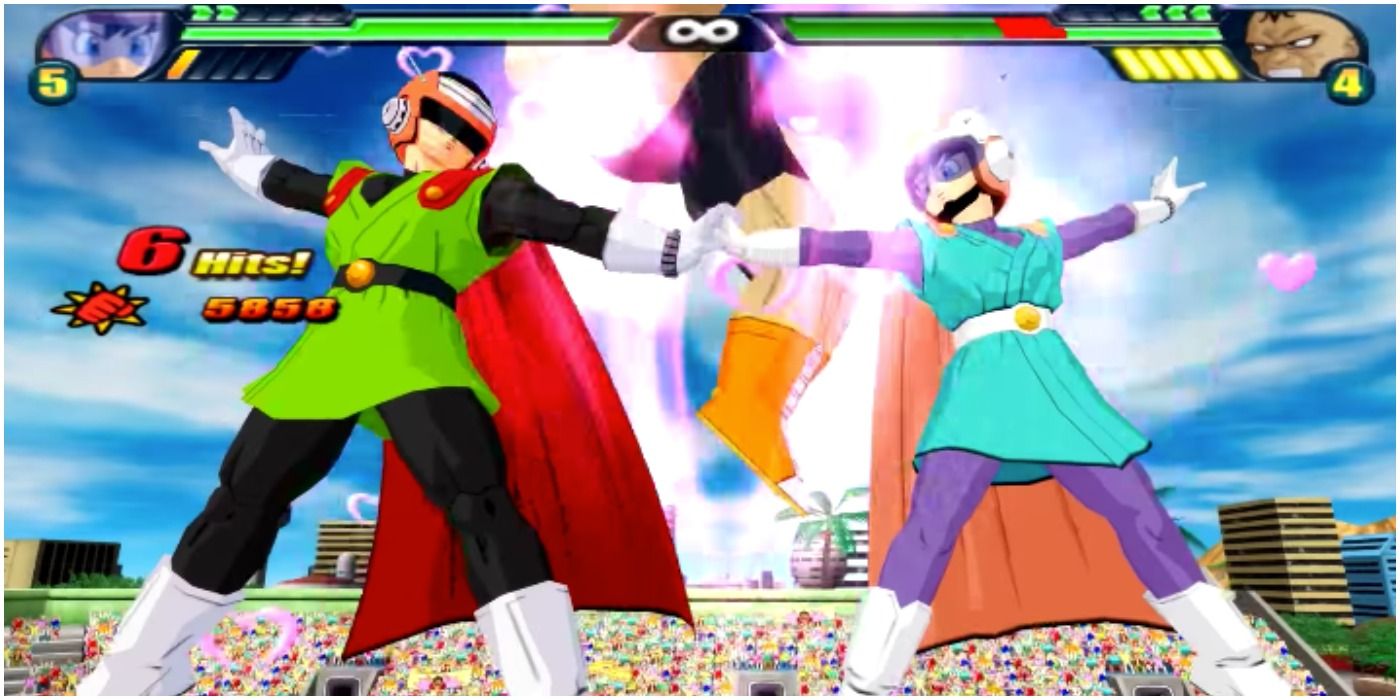 After Gohan adopted the persona of Great Saiyaman to fight crime, many fans wondered if he and Videl would become a crime-fighting couple. Unfortunately, this never happened in the main series, but this reality has been explored in the film Dragon Ball Z: Wrath of the Dragon as well as in games like the Budokai Tenkaichi, Xenoverse, and even in Dragon Ball Fusions. While there’s always a possibility for Dragon Ball Super to add Great Saiyaman 2 into the canon storyline, we doubt it, since Videl hasn’t been in a fight since her run-in with Spopovich.

Still, Budokai Tenkaichi 2, 3, and Infinite World allowed us to see the types of team attacks Gohan and his beloved would use to take down an enemy if they actually fought alongside one another. There’s a lot of posing, hearts, and more importantly, a finale that sends the opponent shooting to the floor. 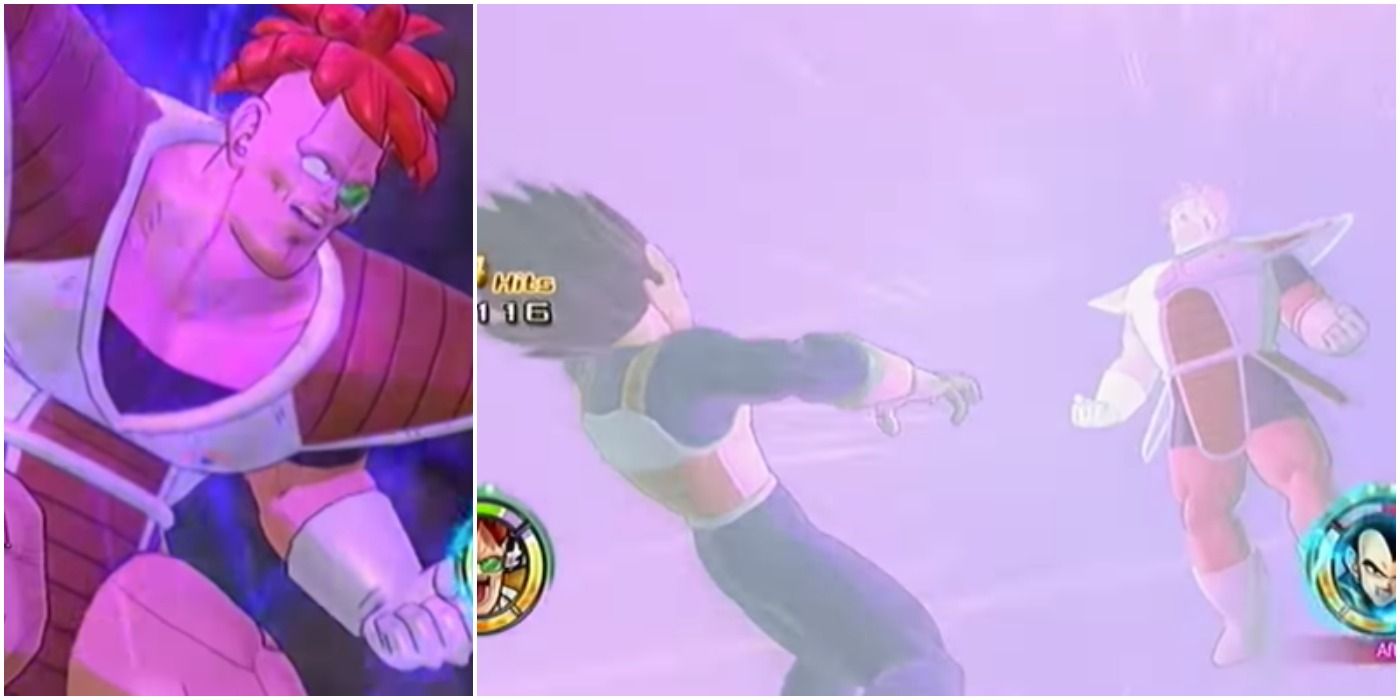 Left with no other option to defeat Goku during their encounter on Namek, Recoome began to charge up his Ultra Fighting Bomber, but Goku exploited the openness that the technique created and knocked Recome out before he could even debut it. It wasn’t until fans picked up a Dragon Ball videogame that they got to see just what this move was capable of.

In some games, the attack even transforms the environment into a wasteland, which means that Goku and his friends would’ve been in some serious trouble had he let Recoome see the move all the way through. 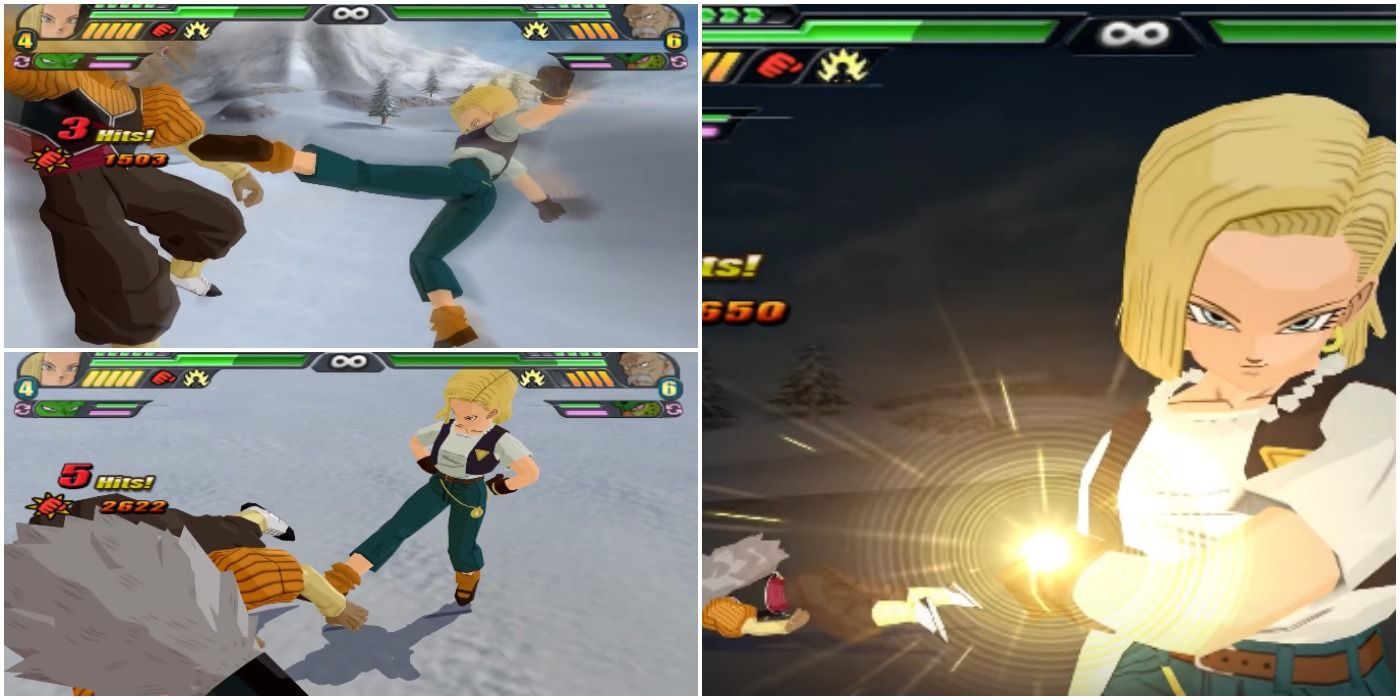 Android 18’s Ultimate Attack in the Budokai Tenkaichi and Raging Blast series, Sadistic 18, consists of her using her famous arm-shattering kick to disorient an opponent before throwing them to the ground. She then kicks them in the side and finishes with a powerful Finger Beam that Future 18 used to kill a man buried in rubble.

She’s never used all of these moves in a string like this, and we’re thankful she didn’t, or else Vegeta would’ve been killed much earlier in the series. 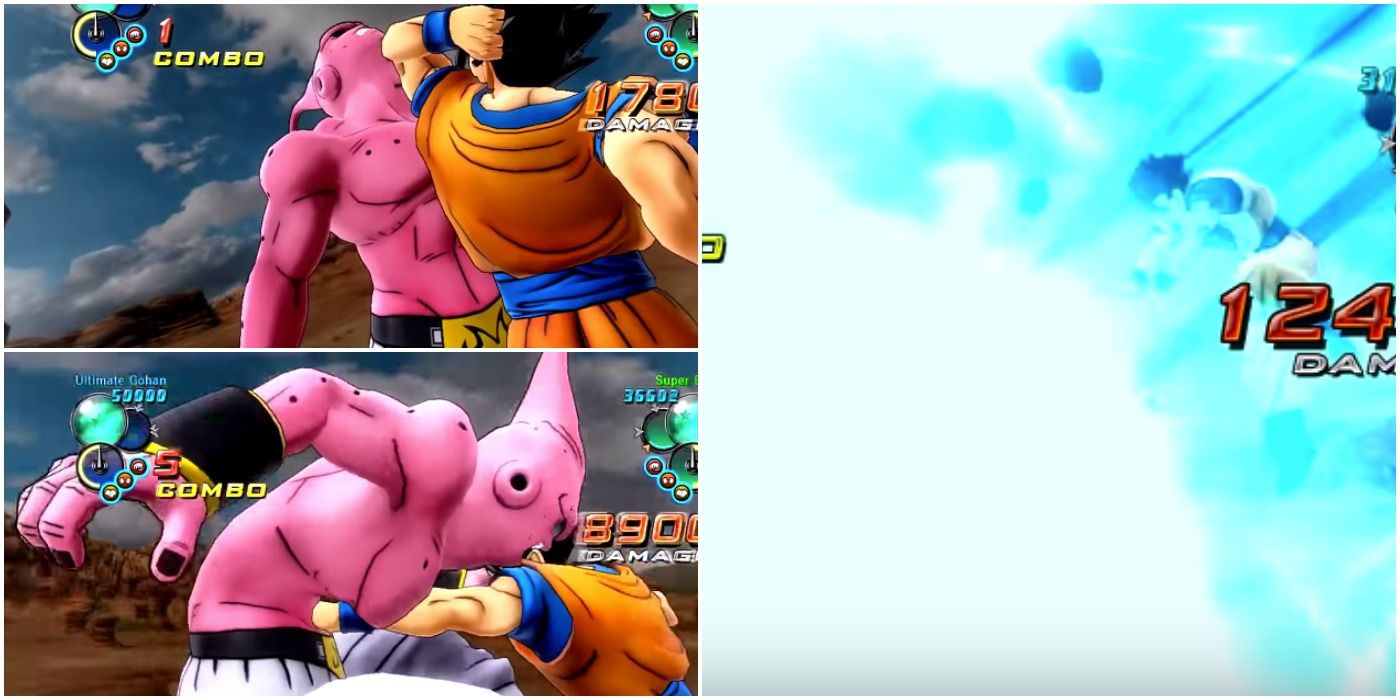 Similar to the last entry, Ultimate Gohan’s Burst Rush is a move that, while he does perform most of it during his battle against Super Buu, the big finale that gamers remember it by: the Ultimate Kamehameha he fires after punching his enemy to the ground, is an exclusive only present in games like Budokai Tenkaichi 2, 3, Raging Blast 2, Ultimate Tenkaichi, and even Dokkan Battle.

This destructive attack truly demonstrates just how fierce of a warrior Gohan became after his training on the Sacred World of the Kais, and we’re disappointed that he never showed off this exact combination during his fight against Super Buu. 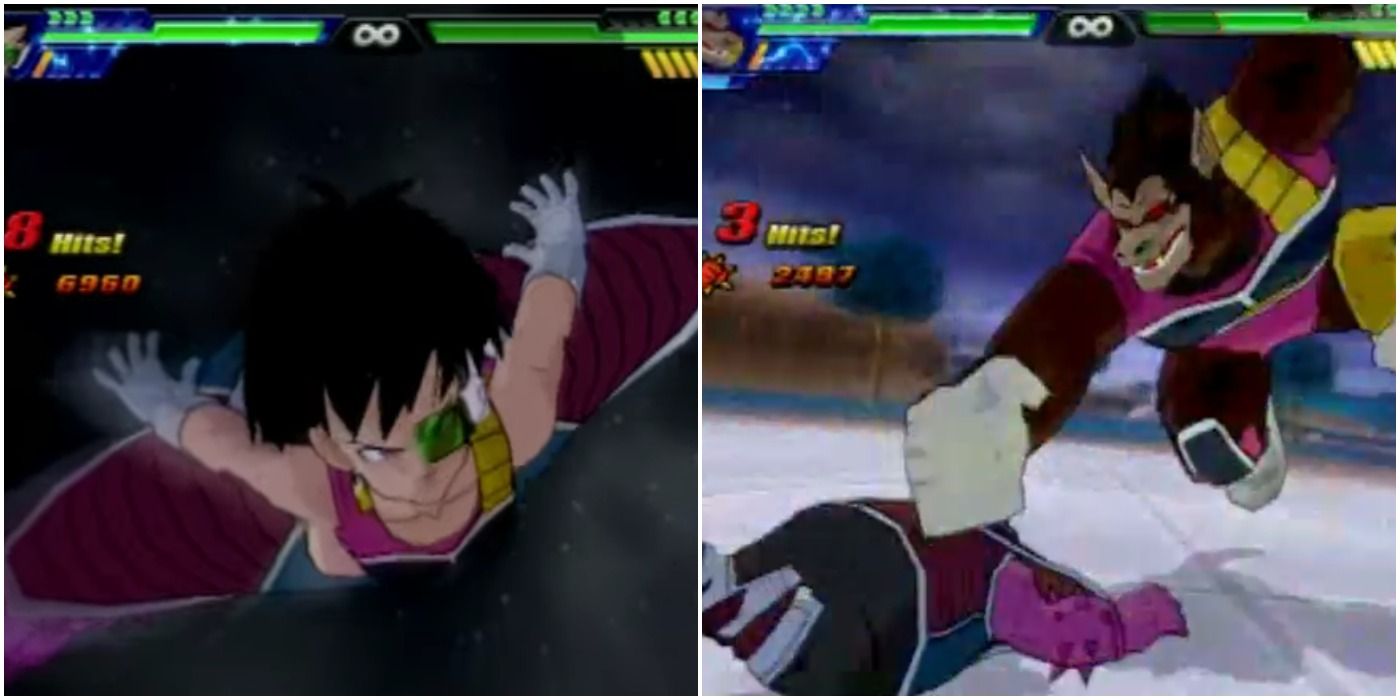 Though some members of Bardock’s crew appeared in many Dragon Ball videogames, one notable member appeared in Budokai Tenkaichi 3 when the rest of her teammates were excluded: Fasha, the first female Saiyan we ever got the chance to play as in any Dragon Ball game. We included both of her final attacks, one being used in her normal form, and the other used in her Great Ape form, because we just couldn’t decide which one was cooler.

As if seeing her snap her opponent’s neck after taking them to the ground with her legs wasn’t cool enough, after her transformation into a Great Ape, fans were able to witness her continuously slam her oversized fist onto a smaller opponent, beating the life out of them in the way that doesn’t make us envious of whoever manages to piss her off. These attacks were our first glimpse into the abilities of Saiyan women, who are even more intimidating than their male counterparts. 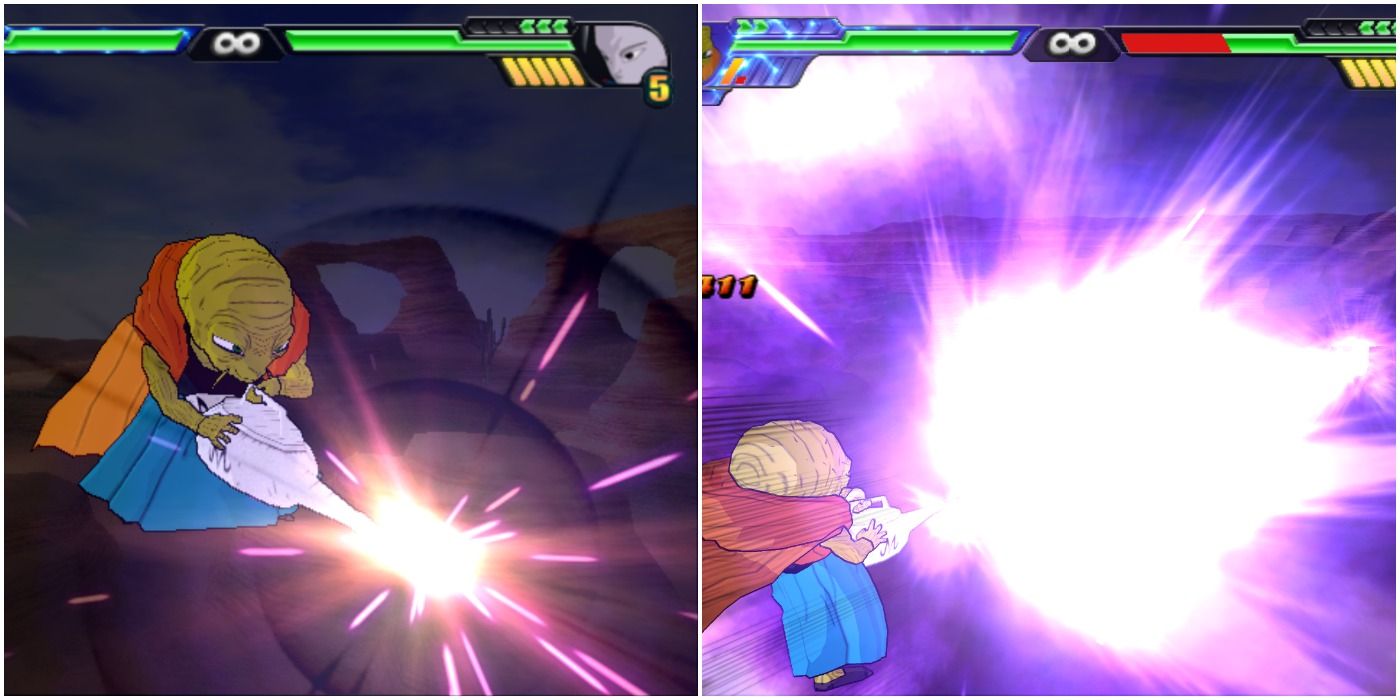 Without a minion to do the heavy lifting for him, it didn’t take much to defeat Babidi. In making him a playable character in Dragon Ball Z: Budokai Tenkaichi 3, developers ensured that we’d think twice before underestimated the little guy. After rubbing his Energy-Suction Device, he can release a powerful wave of purple energy that can be made stronger by his grab.

While we don’t doubt that Babidi can’t do this in the anime, he would never be able to gather enough energy on his own from strong warriors to make the most out of this attack. 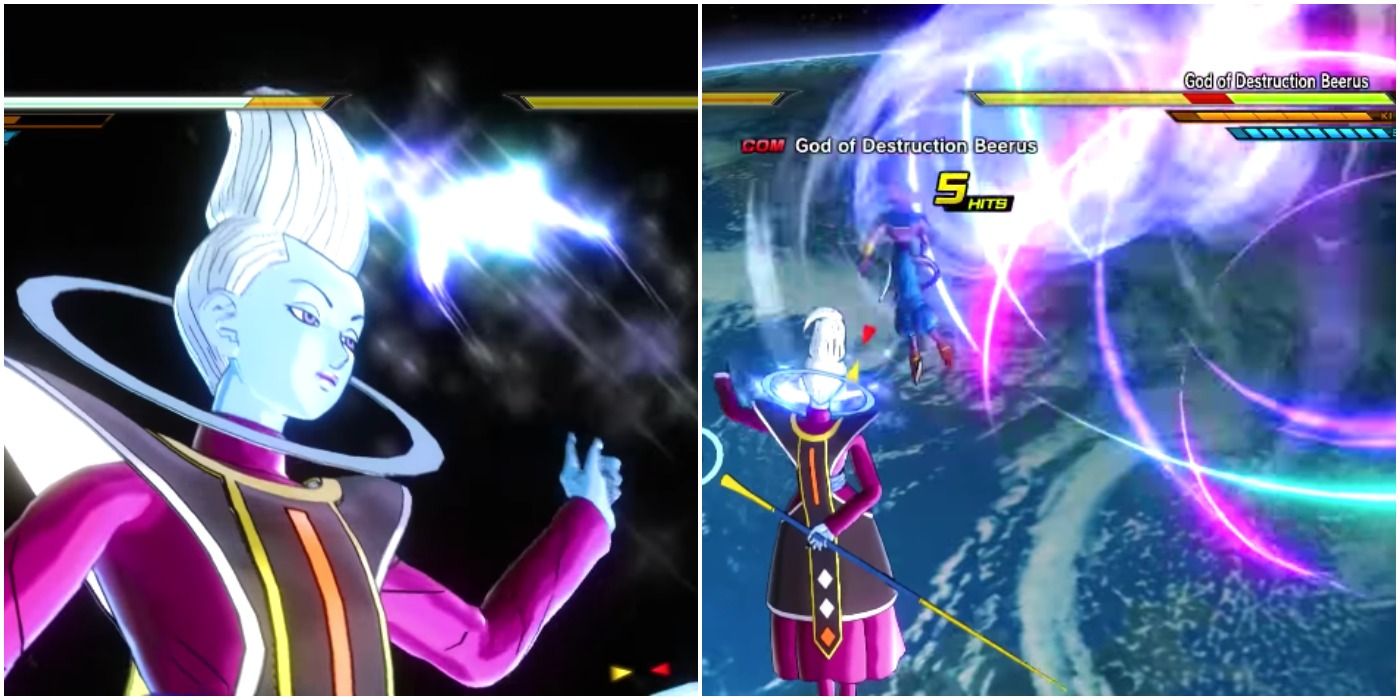 Despite seeing Whis spar with Goku and Vegeta, we’ve never seen him in a serious fight, mostly due to the fact that there aren’t other characters who could provide him with a serious enough challenge. The trouble with putting a character like Whis in a videogame is giving him useful attacks that feel true to his character with no references to go off of.

His Symphonic Destruction not only feels true to his grandeur flamboyance, but it’s also one of the fiercest moves in Xenoverse, quickly capturing an opponent in a vortex of energy. If mortals like Jiren and Goku keep growing in strength, Whis might find himself using this skill outside of the Xenoverse franchise. 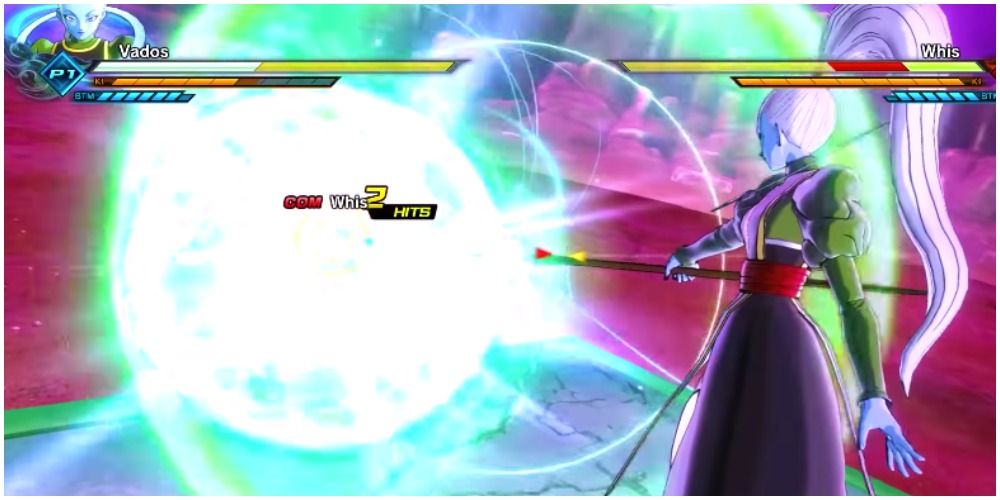 We’ve seen Vados destroy a planet in Champa’s place in the anime, but we’ve never seen her Requiem of Destruction, which consists of her trapping her opponent in a sphere of energy before detonating it.

Not only were fans excited to actually get an idea of what kind of techniques she would use in a serious fight, but they were also slightly disappointed to realize that given how powerful she is, they might never get the chance to see her actually use this move on an opponent in the actual show. 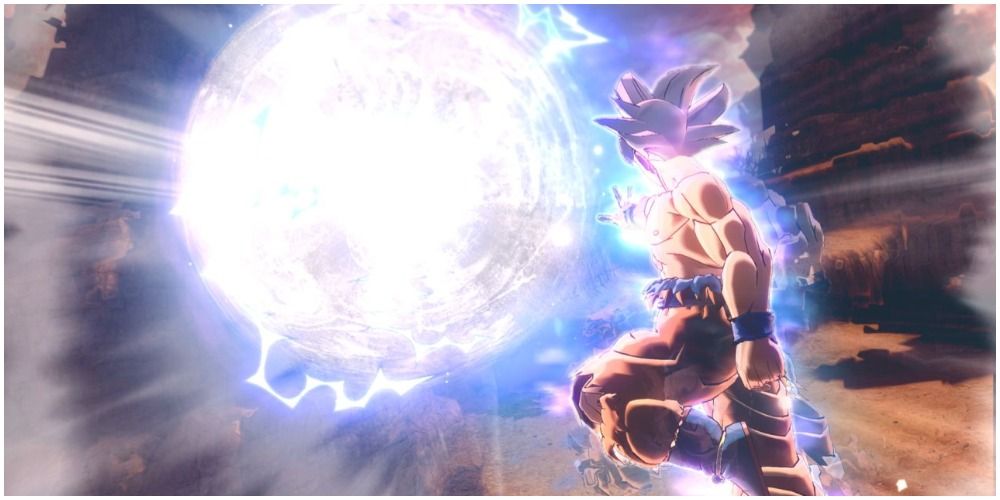 For some reason, Xenoverse 2 released DLC that included Mastered Ultra Instinct Goku almost a month before his debut in the anime. This led fans to believe that the techniques utilized by this Goku in the game would be reminiscent of his abilities in the show, and while that was true for the most part, his Ultimate Attack, Godly Display, is something that we’ve only seen in the game. It consists of Goku overwhelming his opponent with high-speed punches and kicks before finishing them off with a huge white orb.

We didn’t see anything that remotely resembled this during his fight with Jiren, giving us the impression that there was some kind of disconnect between the developers and Dragon Ball Super‘s production team.