I’m playing Dragon Age for the first time. If that wasn’t enough to give every member of TheGamer staff heart palpitations and every member of the Facebook comments section enough ammunition to fire at me for eternity, it’s also my first BioWare game.

When I was at school and would happily spend every second of my free time playing hundreds of hours of RPGs, me and my friends were more Bethesda than BioWare. I’m not trying to stir up some kind of rivalry where there isn’t really one, but when all your friends are talking about Fallout and Elder Scrolls, you want to join in the conversation. Anyway, I’m getting around to BioWare games now, and I’m starting with Dragon Age: Origins.

As with nearly every RPG I play, I made some mistakes when leveling up. I’ve got some inopportune abilities and put too many points into Constitution and too few into Dexterity. I wanted to make my Dwarf Commoner a two-handed tank, but after letting Morrigan join the party, I kinda want to be a Mage too, even though that would mean starting over. These are just general RPG problems (I restarted Divinity: Original Sin 2 three times because I was so indecisive about my build), but my biggest issue is with my dog. 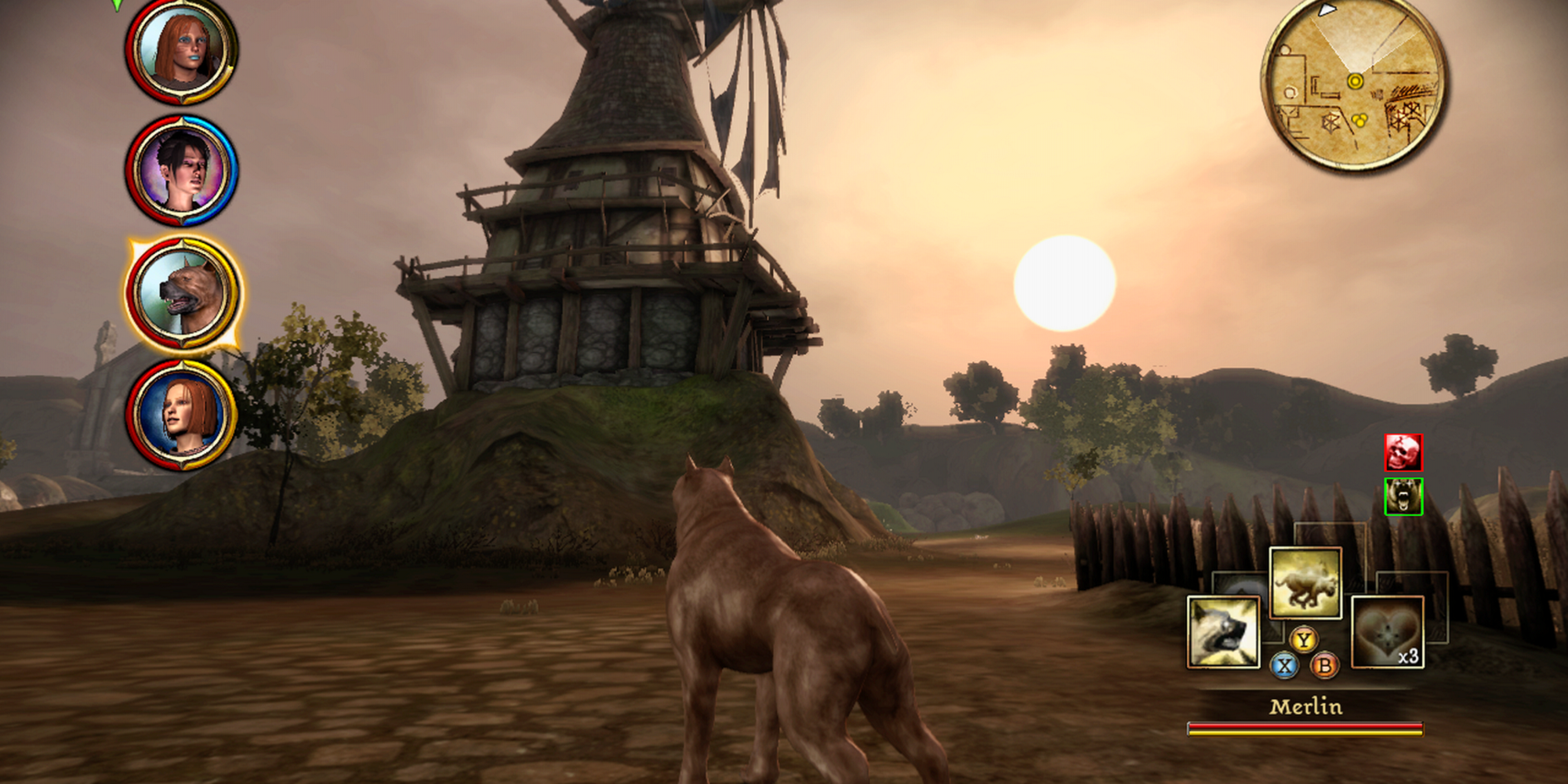 The dog in Dragon Age: Origins is a Mabari war hound, a beast of pure muscle bred for one purpose: to kill, maim, or otherwise violently injure whoever or whatever you set him upon. I guess that’s three purposes, but they live under the same purpose umbrella. Your faithful canine companion comes up to your waist in height, and is nearly as wide as tanks like Alistair or Sten, and yet is practically useless on the battlefield.

At the start, Merlin was a valued member of my party. He dealt with weak foes well, and his lack of armour was never a problem. But then, I ventured into the Brecilian Forest. I was mightily underleveled and eventually turned back, but my poor Mabari was about as useful as an overgrown pug. Even when I went to an area more accessible for my party’s level, he was sadly dead weight. And yet, whenever I faced a pack of hounds myself, they were the brutal killers that Merlin had been built up to be. Was Merlin the runt of the litter? A coward? Had I petted all the aggression out of him?

I’ve been trying not to Google things in my playthrough, as I’m happy to own my mistakes and not let strangers’ advice impact my decisions. Part of the appeal of RPGs is fucking things up and having to live with, or trying to fix, your mistakes. But I had to know whether my poor Merlin could be of any use to me on my playthrough, or if I needed to send him to the big camp in the sky and put him out of his misery. There was good news and bad news. 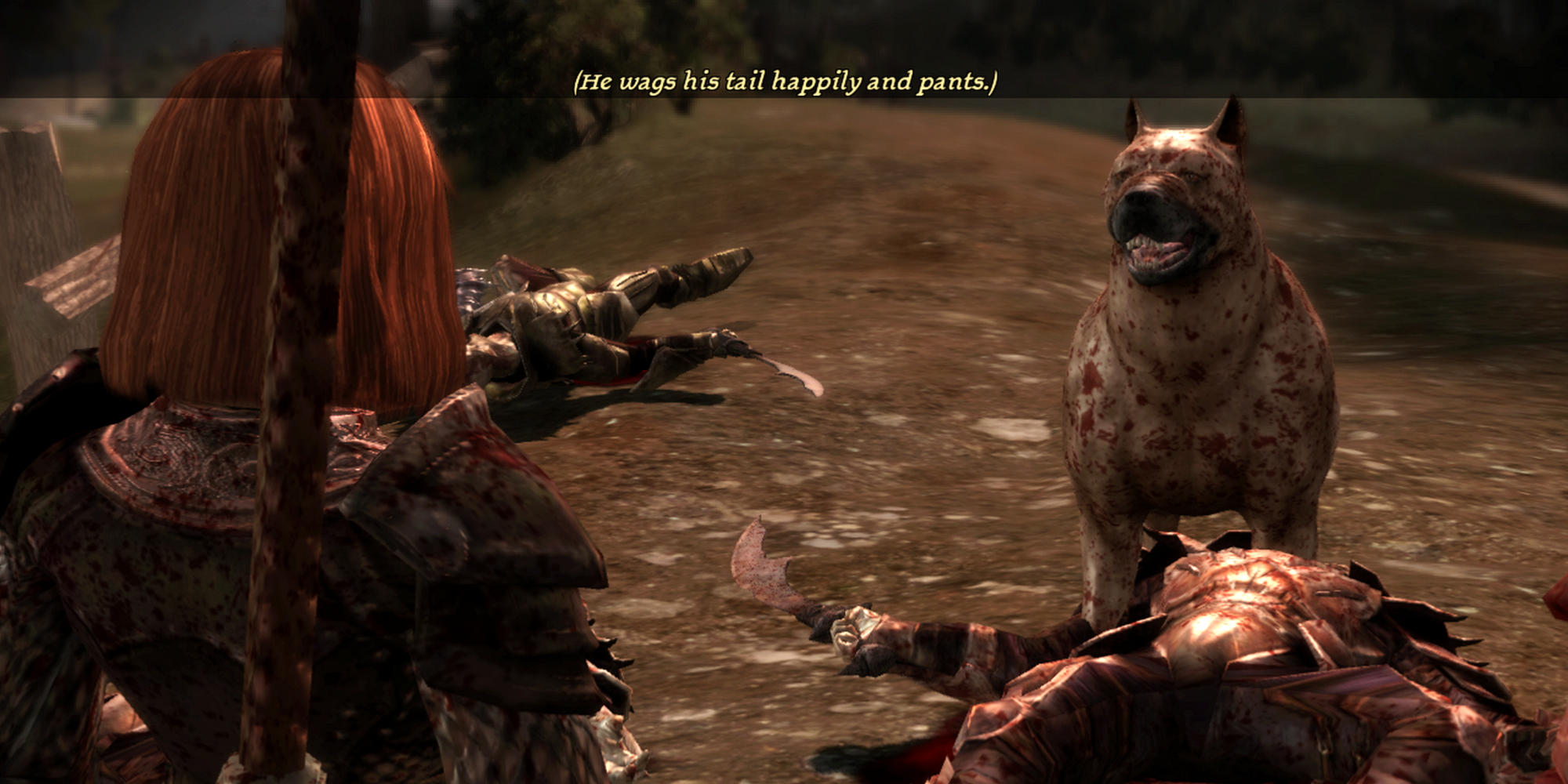 The good news is that the Dragon Age community has christened the dog Barkspawn, which is fantastic. The bad news is that he’s pretty much a terrible party member. He can nearly be a tank on easier difficulties, but the fact he can’t wear armour like other characters holds him back. Getting the Overwhelm ability apparently makes him kind of good, but as he only appears to gain a new ability every two levels, it’ll take me a long time to get that, time in which I could be leveling up a different tank, and giving them some Heavy Chainmail armour in the meantime.

I’ll be sad to leave Merlin behind, but it’s what I’ve got to do. The other hounds I came across were pretty fearsome until I learned how to deal with them effectively, but my opponents seem to have no trouble at all in dispatching Merlin in a few swift blows. As the game gets progressively harder, he becomes more of a hindrance, but I think he deserves better. Could BioWare have not made little doggy armour for him to wear, or given him more abilities, or just a strength boost? He’s a war dog, for fuck’s sakes, a Mabari of legend, not some spoiled puppy at Crufts.

I’m playing Origins on Game Pass, so I think mods are pretty much out of the question if I want to be able to switch between my console and PC. If they weren’t, adding Merlin as a fifth but ineffective party member would be perfect. But a lot of things (cough, respeccing party members, cough) would be perfect if I could add mods that worked on console. It’s something for me to look into, anyway. In the meantime, I’ll just give Merlin a load of scritches and belly tickles every time I return to camp. I hope those Dwarven traders are taking him on plenty of walks.