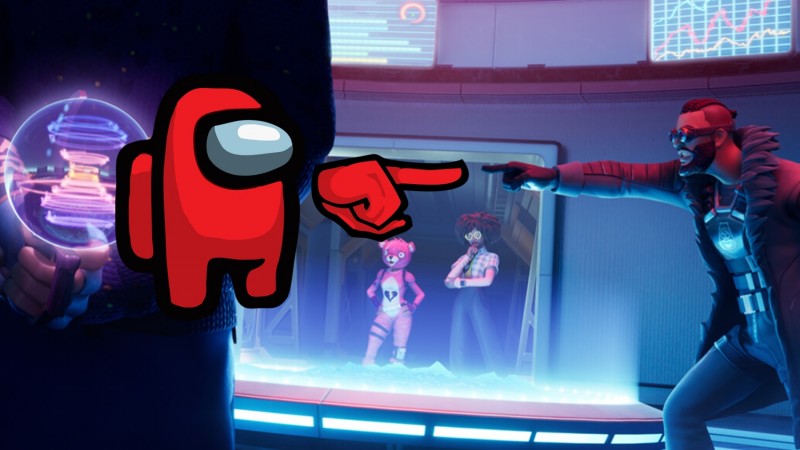 Epic Games revealed a new temporary mode for Fortnite, a whodunnit experience that is drawing a lot of attention for the wrong reasons. In many instances, the gaming community will liken an experience like this to Among Us due to the indie game’s rocket into popularity over the past year. But does Fortnite’s new mode, called Imposter, have one too many similarities to be a coincidence? It seems that way, and the folks behind Among Us feel the same.

Fortnite has been party to numerous crossovers in the past, usually as a collaborative experience between Epic Games and another company. However, InnerSloth was not included in the conversation about Fortnite’s Imposter mode, which — by the way — is what the murderer in Among Us is called. When the new mode was announced, the Among Us comparisons immediately began, but it wasn’t until I dove in deeper that I realized this was more than simple inspiration; it really is an unofficial crossover. The problem with it being unofficial is that InnerSloth, which is a small indie team, in no way benefits from the new Fortnite mode, whereas Epic Games has everything to gain. At least they did until the Among Us team started to speak out.

Victoria Chan is the community director for the Among Us game, and she took to Twitter to share her disappointment with the new Imposter mode. “It would have been really, really cool to collab here, haha,” she said in a Tweet. “Just sad indie hours rn.” She added, “Like game mechanics fine, those shouldn’t be gatekept, but at the very least, even different themes or terminology makes things more interesting?”

It’s okay tho they flipped electrical and medbay and connected security to the cafeteria. pic.twitter.com/XXVsJPpiXn

Among Us Unity programmer Gary Porter added to the conversation with a direct comparison to the map in Fortnite’s Imposter mode and the Skeld map in the indie game. The two share extreme similarities, as seen above. “I haven’t been tweeting much recently because I’ve been working so hard on upcoming content for Among Us,” he shared in the thread. “So it feels weird to be compelled to tweet again because of stuff like [Fortnite].” He added, “It’s okay, though. They flipped electrical and medbay and connected security to the cafeteria. I wasn’t even around for the development of Skeld, and I’m still kind of offended.”

Marcus “Puff” Bromander, the Co-founder of InnerSloth, added to the conversation saying that they didn’t patent Among Us mechanics because “I don’t think that leads to a healthy game industry” but that it’s not that hard to put your own spin on something if inspired by another game. “At the end of the day, I’m just gonna keep making the games I wanna make. Everything else is just noise.”

This isn’t the first time Fortnite has come under fire for being a little too “inspired” by other content, including lawsuits centering around emotes that took from popular pop culture references. With the name of the new mode itself being Imposter, the similarities between the two maps, and the entire way the Imposter Mode was presented to the public points towards Epic Games making a critical misstep when being inspired by other titles. Indie studios have enough barriers to cross, from funding to resource support, so when a mega-giant like Epic Games makes a move like this, it’s difficult and harmful to the studio and other indie teams out there.