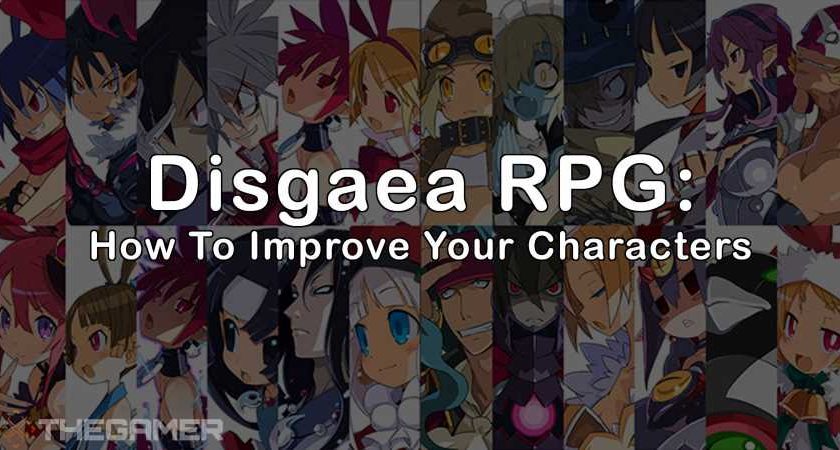 Disgaea games are known for their intricate and complex mechanics, especially when it comes to powering up your party. Disgaea RPG is no different, so let’s take a look at how you can improve your characters.

Before we begin, keep in mind that Disgaea RPG is a marathon, not a sprint. Slowly but surely powering up your characters is the best way to progress. The gains may be small, but over time you will definitely see the difference in power. As of now, level 9999 isn’t required by any means, as the content in the game is scaled to much lower standards. Work at each character little by little, and slowly build up your party. 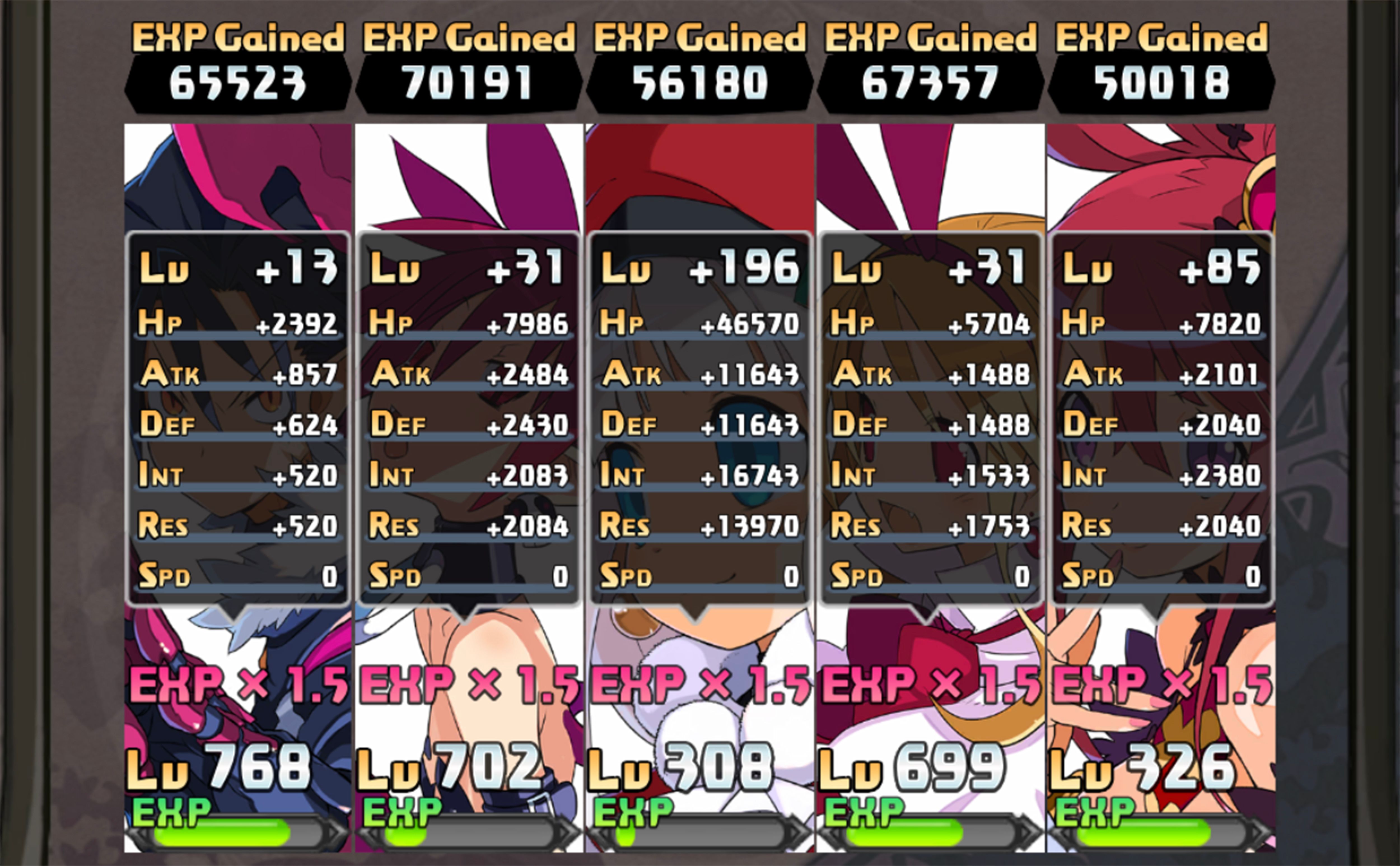 First and foremost, leveling up your characters is the best way of quickly boosting their stats. Each level-up gives a small boost to all stats except speed, and the final level cap is 9999. That may seem like a huge number that would take years to reach, but you’ll often be leveling up 30-40 levels at a time in the EXP Gate.

The EXP Gate is the most efficient place for quickly leveling up your characters, but it can only be done a certain number of times per day. Be sure to always challenge the highest stage you can comfortably complete, and pass the EXP boost bill in the Dark Assembly for even more EXP.

When you’ve already run your EXP Gate stages and are out of AP, don’t forget about the Item World as a way to gain more EXP. We’ll take a more in-depth look at that later.

Skills are how a character actually fights, and are split between generic weapon skills and unique character skills. Characters learn new skills at levels 1, 50, and 200, but Nether Enhancing can also unlock unique skills.

Skills are leveled up by using them in battle or by using a Skill Book. Increasing a skill’s level will have it doing more damage and costing less SP.

Weapon Mastery is basically the level of proficiency a character has with a certain weapon. While every character can equip whatever weapon you want, each character has a weapon they do the best with. For example, Killia’s Forte is fists, but he could equip a sword or bow. 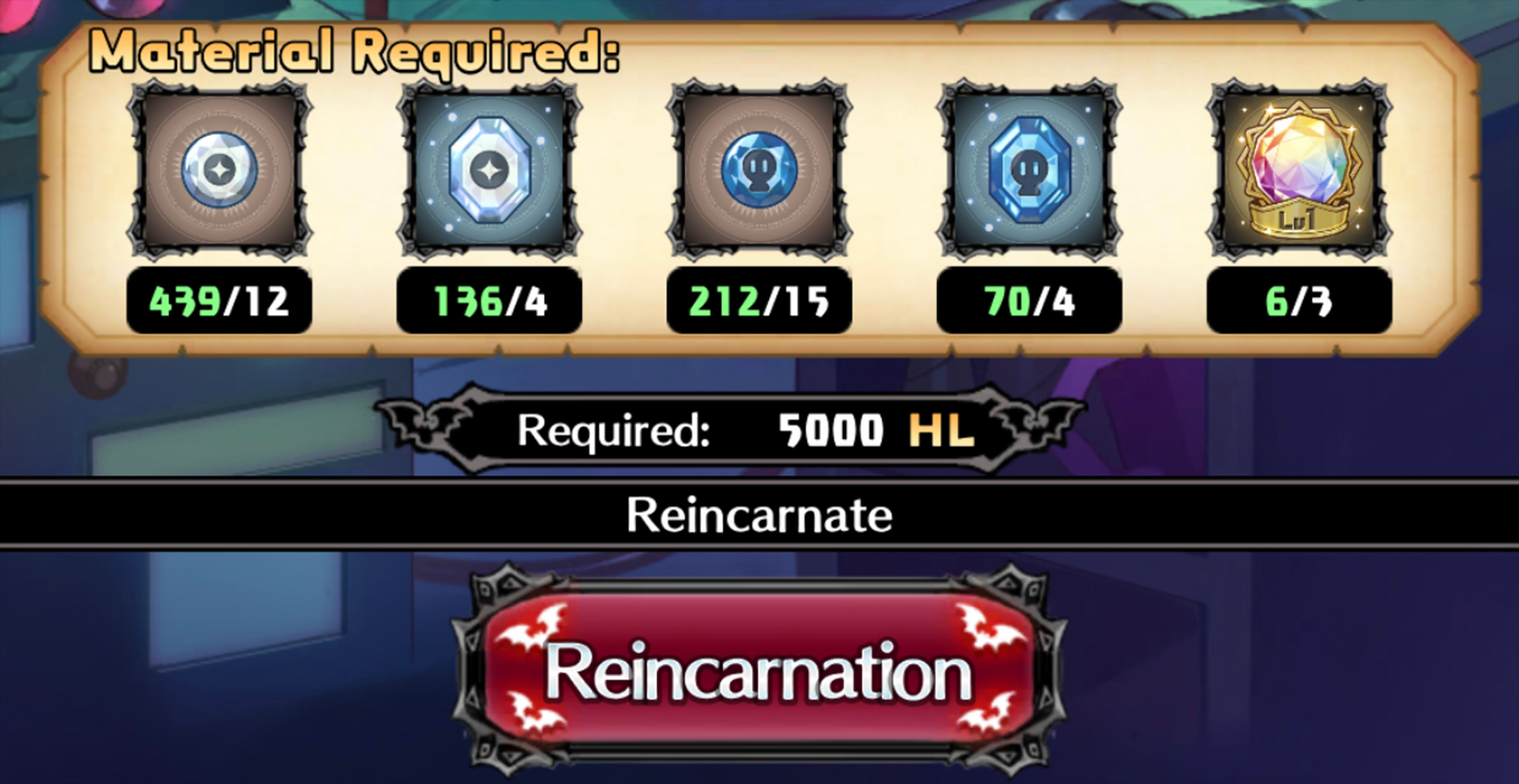 To unlock your character’s level cap, you will have to Reincarnate them. Reincarnation can only be done when the character reaches their current level cap. Additionally, some Reincarnation specific items will be required. These can be found in the Dark Gates, so be sure to do those as well every day.

Reincarnating a character resets their level back to 1, but increases their level cap by 100 each Reincarnation. Additionally, the process boosts the character’s stat and EXP gain per level, meaning they will level up faster, and gain more stats per level up. 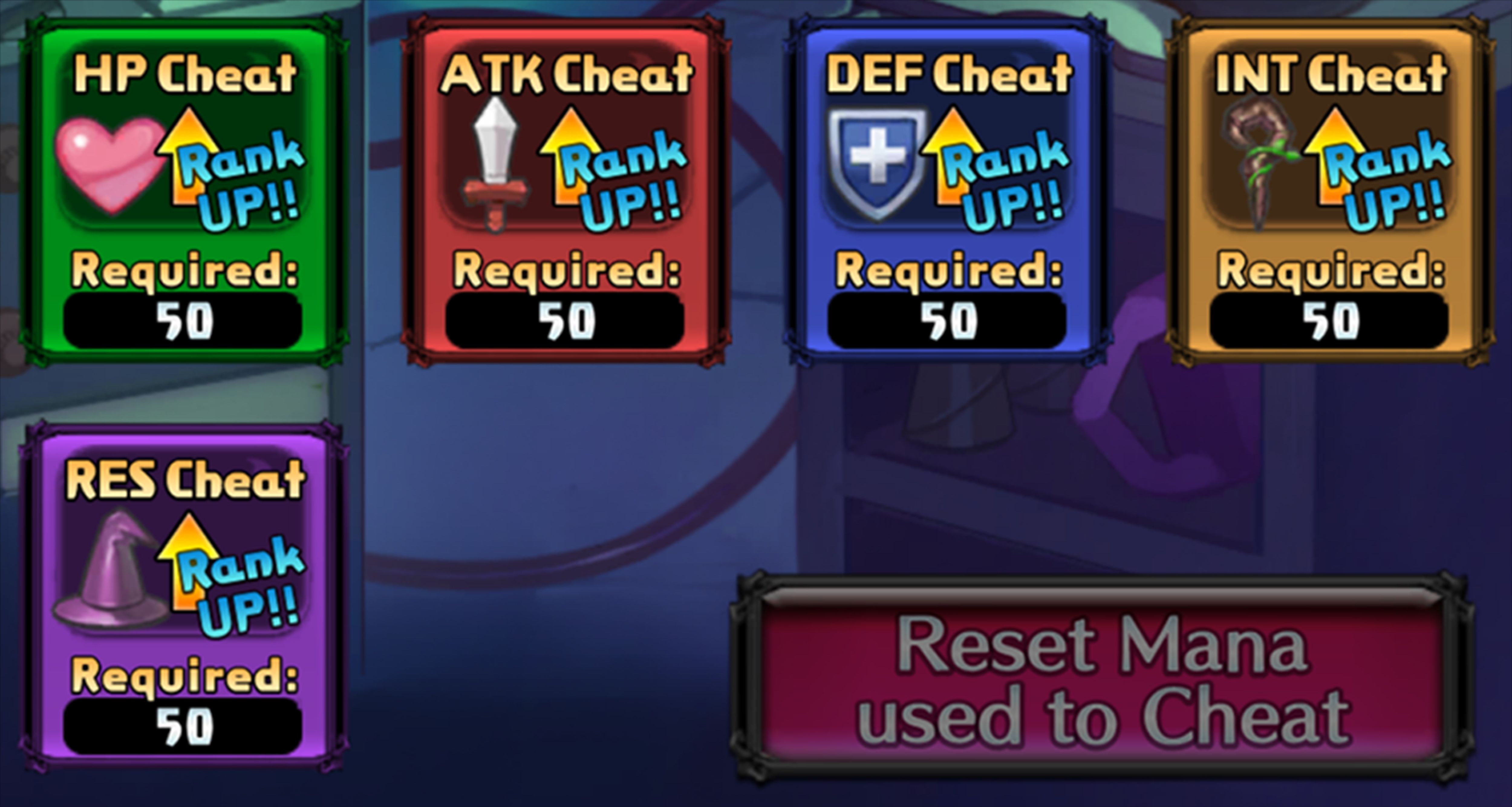 Mana is gained from Reincarnating. Every Reincarnation grants 100 Mana to be spent on either Cheats or Weapon Mastery. Cheats are essentially small boosts to a character’s main stat. These can be increased indefinitely, as long as you have Mana to do so. The Mana cost for upgrading a Cheat stat increases each time you do it. 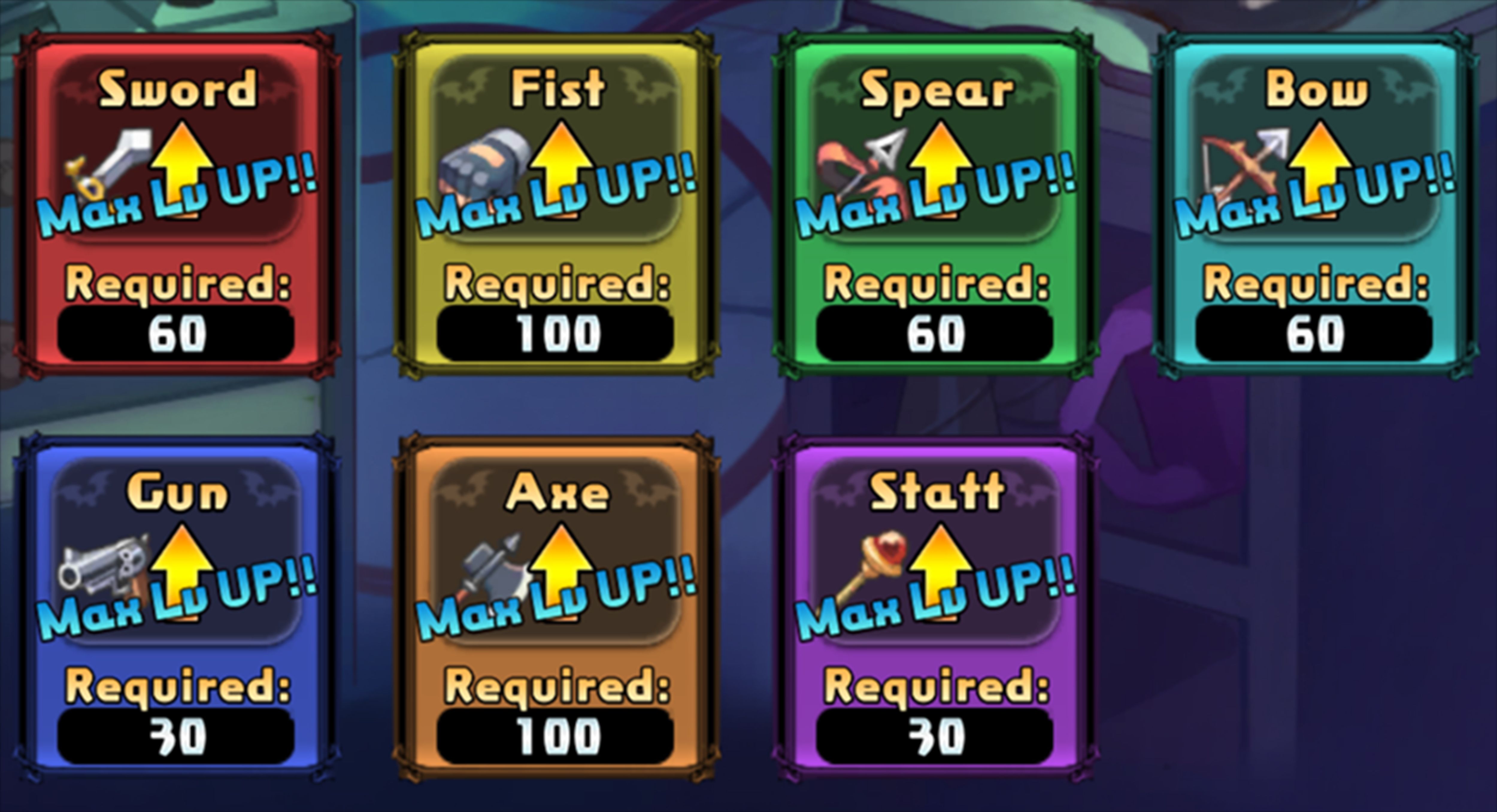 Mana can also be used for increasing the Weapon Mastery cap. Doing so will let you level that Weapon Mastery higher and unlock new, more powerful skills. 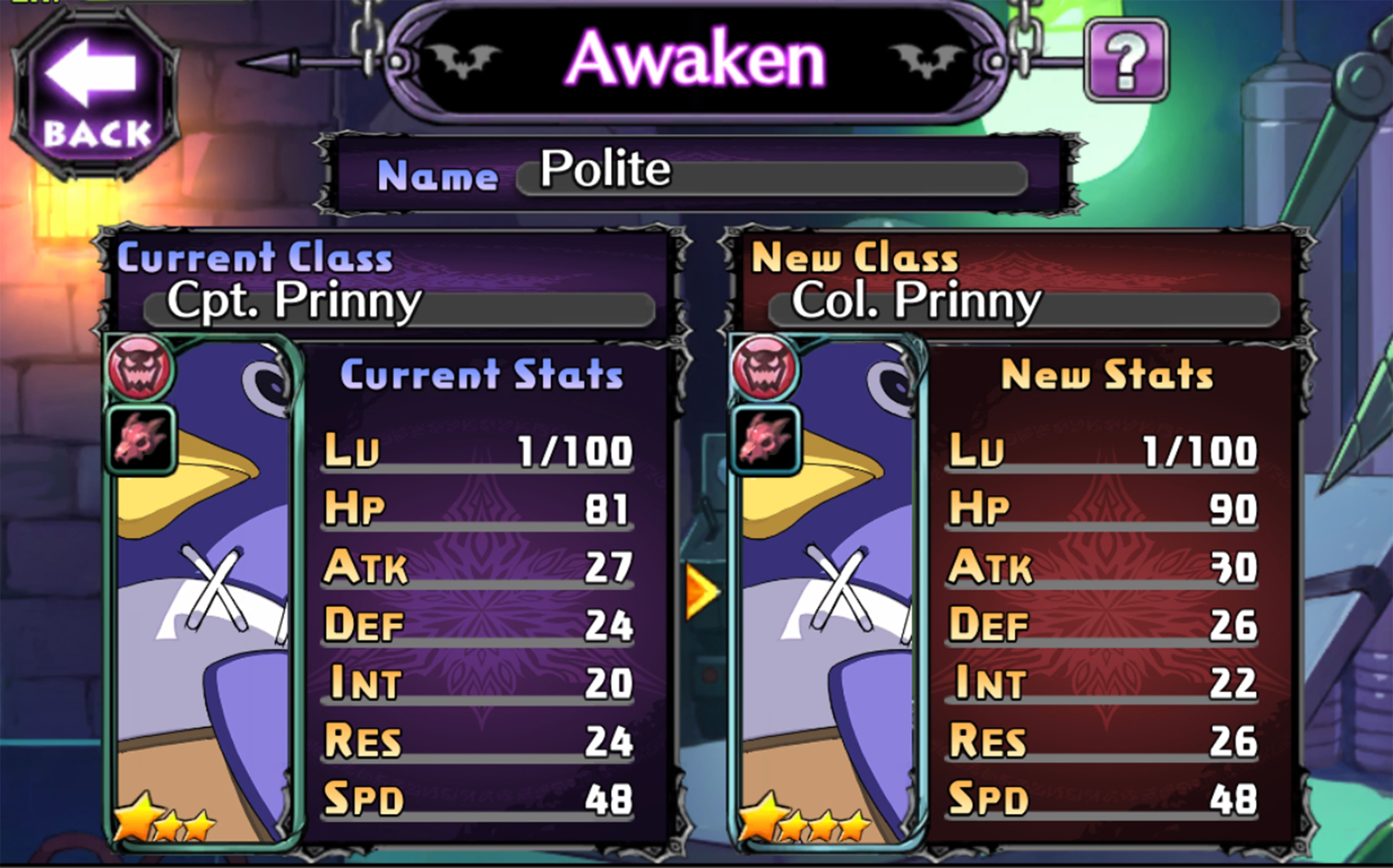 Characters in Disgaea RPG all have a star value. Naturally, a 2 Star character is stronger than a 1 Star character, and so on. The highest level you can get from Summoning is 4 Star, but this can be increased through Awakening. Awakening a character increases their base stats by a large amount.

Awakening isn’t exclusive to 4 Star characters, meaning any character in the game can rise to the maximum of 6 Star. You can raise your favorite characters regardless of Star rarity, but it’s important to note that natural 4 Star characters are better overall, with higher base stats and more powerful abilities.

To Awaken a character, you first need five equal Star level characters. For example, to raise Killia, who is a 4 Star, to 5 Star, you will need five other 4 Star characters. This is where Prinnies come in. You can acquire them from story stages, normally at 1 Star. You can combine these 1 Star Prinnies all the way up to 4 Star, allowing you to Awaken your other characters.

Nether Enhancing is one of the best ways to increase a character’s power, but also the most costly. To Nether Enhance a character, you will need a duplicate copy of that character or an N.E. Prinny. A character can be Nether Enhanced to N.E. 10, and each level will grant either a big stat boost or an exclusive new ability.

Nether Enhancing is very costly, and N.E. Prinnies should be used carefully, as they are quite hard to come by. Reserve using them for either Limited characters or your absolute favorites.

Characters can equip four pieces of gear; one weapon and three armor. As mentioned above, each character has a weapon that is their Forte, but armor is a little more customizable. There are a few different categories outside of armor, including orbs, shoes, glasses, and belts

Equipment is purchased from the store for HL. Every day, there is a fresh list of gear that can be purchased. The rank of this gear is dependent on your Customer Rank, which is increased by passing the related bill in the Dark Assembly. Additionally, you are able to refresh the equipment list five times a day for free.

Higher rank gear will cost more HL, so make sure to do the HL Dark Gate as much as possible each day. Each level of the HL Gate actually doesn’t have too big of a difference in the quests’ payout, so doing each level of it every day will be the best way of gathering lots of HL. Bring characters like NE 1 Seraphina with an HL Boost ability for even more HL. 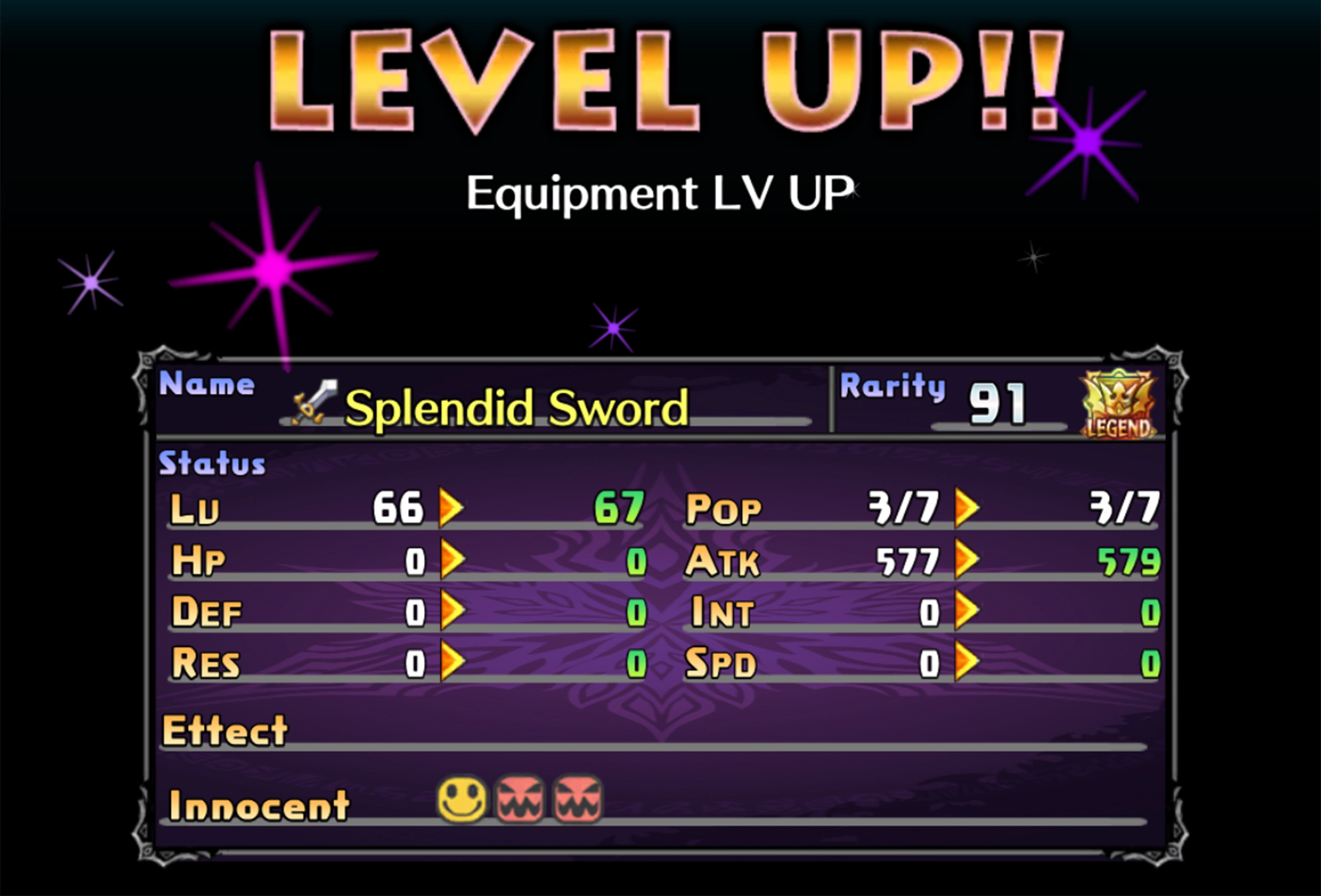 Equipment is upgraded in the Item World. Check out this guide for a more in-depth look at the Item World. Basically, every piece of equipment has its own world inside the item that can be explored in order to improve that item.

In addition to upgrading your equipment, the Item World is also a decent place to level up your party. Since the Item World doesn’t cost AP to enter, you can effectively do it as long as you have the time. While the EXP and HL gains from the Item World are relatively small, they do add up over time. 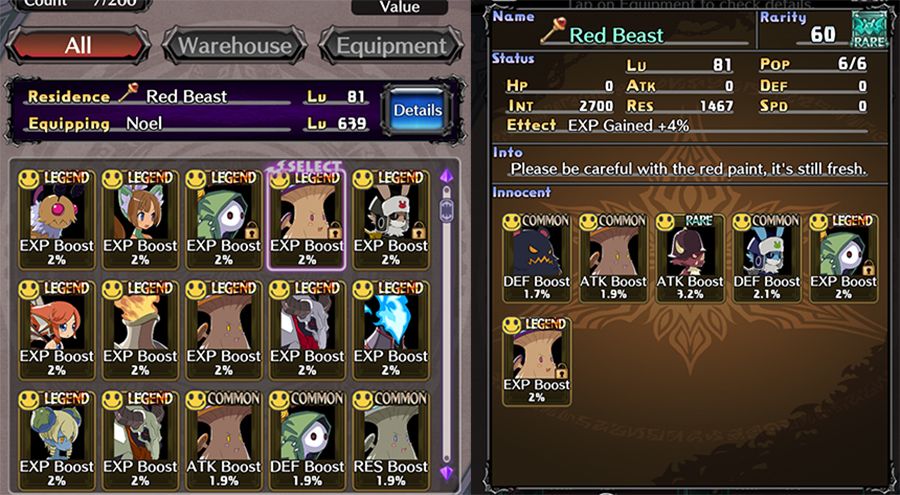 The Item World is also where you can find Innocents. Innocents are creatures that reside inside equipment and give passive bonuses to the weapon’s stats. Innocents are essential to bringing out the full power of a weapon.

Innocents provide a small boost based on their rarity, Common giving the least and Legendary giving the most. Pieces of equipment can hold a certain number of Innocents, depending on the rarity of the weapon.

Innocents can be moved between items through the Innocent Storage, or stored for use in gear later. Innocents are costly to move around, so think carefully about which ones you want to move before you invest the HL.

Now that we understand the basic mechanics of improving your characters, let’s look at a few things we can do to optimize growth in Disgaea RPG.