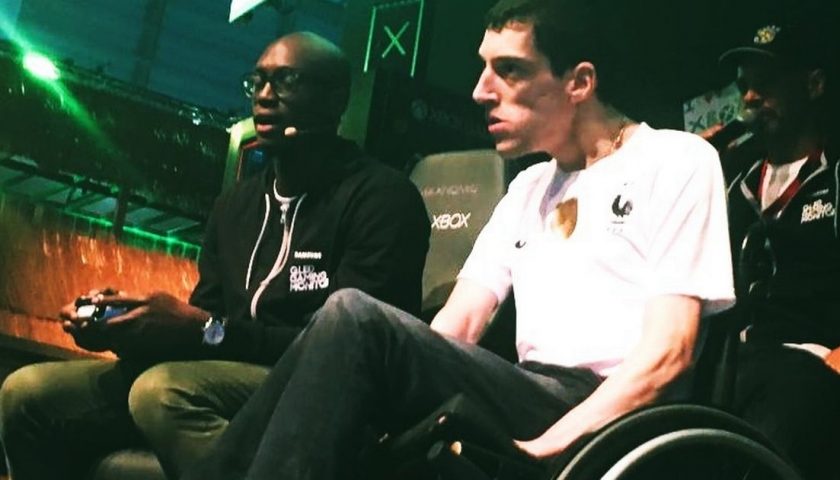 It can be easy to take videogames for granted, but for many disabled people, the industry has been dragging its heels when it comes to making top titles accessible.

That's what one disabled Twitch streamer, DJ and YouTuber is trying to change.

Forty-one-year-old Hichem, aka 'DJ H', is from Rennes in France. Born with cerebral palsy, Hichem has made a name for himself in the gaming community with some incredible videos of him gaming and DJing using only his feet for his 13,000 subscribers on YouTube.

Thanks to accessible controllers created by his dad and, later, big companies like Microsoft and Sony, gaming has been a lifelong passion for Hichem. That's why he's now campaigning to make all games more accessible for disabled people.

Due to convulsions he experienced at birth as a result of his condition, Hichem has never been able to use his hands, which made it very difficult for him to learn to read and write when he was young.

So, when he started primary school, his parents decided to set him up an Amiga 500 computer with a modified trackball mouse, giving him the chance to keep up with his classmates.

But the computer became much more than just a tool for learning. "Like all the other kids, I had to play, but it was impossible for me to play with classic toys," he says. "So my parents had the idea of helping me use the computer to play videogames."

Hichem's father modified a joystick, enabling Hichem to play videogames on the Amiga using his feet for the first time.

Since then, Hichem has been gaming to such a degree of success that he has even beaten professional eSports players in competitive matches at conventions.

He says: "Because of my physical handicap, I had never been able to play real sport, so when my father [made] my first controller, I had a feeling it could help me to not just play video games but also what it might be like to play sport."

For example, when EA released FIFA 2011, Hichem felt he was able to experience football for the first time, or Formula 1 through racing games like that of Codemasters' F1 series.

This is where Hichem began posting videos on YouTube, where he not only campaigns for accessibility in gaming, but also shares Twitch clips of himself beating some of the most popular games on the market.

As his channel grew in popularity, Hichem met with France's Xbox team, who had just developed the Xbox Accessible Controller (XAC).

After seeing the controllers his dad built for him, they invited Hichem to do a demonstration of the XAC at a top gaming convention in Paris. At the convention, he was able to win a FIFA match against a professional eSports gamer, and even meet the Playstation team.

"On that day, I [was] able to surpass my handicap and become even better than any classical gamer," he says.

He says he can now play any kind of videogame on the latest consoles, thanks to the help of other gaming companies such as Logitech, Ubisoft, EA, Codemasters and others.

Accessible hardware has also made it possible for him to succeed as a DJ, which he has been doing for 20 years at festivals and nightclubs across Europe.

"All of my arcade controllers have been tailored to help me play with my feet and I enjoy that. So I can even play online with other, non-disabled players and I often win," Hichem says. He then films clips of these game sessions and posts them as 'Let's Play' clips on YouTube in order "to show the world my vision of accessible crossplay".

Today, his favourite games include eSports titles such as FIFA, Call of Duty, Forza Motorsport and Gran Turismo, as he says these 'work the best' with his disability.

Hichem also enjoys games with a 'nice history and scenario'. "It's like if I was playing a role in a movie," he says.

"For example, The Witcher games have a scenario that helps me escape from my disability and I feel like it's real. It's also the same with Assassin's Creed as Ubisoft gave me some games to test. With this I've been able to learn history and travel to places I would never go in my lifetime."

Hichem's ultimate goal is to make enough of a name for himself in the gaming community that big developers approach him for advice on accessibility. Currently, he does a lot of outreach to companies himself, but wants gaming firms to start consulting him and other disabled gamers first.

"I think that accessibility in gaming should not be something gamers have to negotiate. It should be the default in all games and devices," Hichem says.

He adds that: "I started my YouTube channel with the goal of showing that disabled people can do the same kind of stuff as [able-bodied] people with the right tools, motivation and support.

"If one day I am able to have some influence on gaming because the developers asked me advice, I would love to be able to say I had been successful and that finally, a disabled streamer has been recognised."