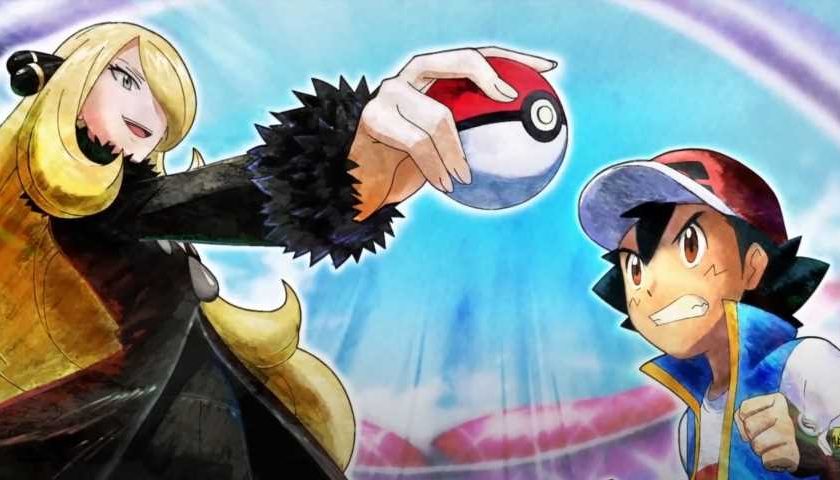 It couldn’t have ended any other way. The Master’s Eight Semi-Finals are over, and Ash has emerged victorious over Sinnoh League Champion Cynthia. This was a fight a decade in the making and it didn’t disappoint. Over four episodes, Ash and Cynthia faced off in a back-and-forth battle that pushed all of their Pokemon to their breaking points. In the end, Ash’s Mega Lucario manages to take down both a Dynamax Togekiss and Garchomp, Cynthia’s partner Pokemon and the ace on her roster. It was a battle for the ages, so why are so many people saying Cynthia threw?

To understand the controversy, we have to start back in the quarter-final match, Cynthia vs. Iris. No one expected Iris to come out ahead, and indeed the fight went pretty much as you’d expect. The big moment from that battle – which has already become iconic – was Cynthia revealing her lipstick Key Stone and Mega Evolving Garchomp. This was an overkill move for the battle at hand, but it served the important purpose of getting in Ash’s head. Cynthia was already a formidable opponent – as her fight with Iris quickly confirmed – and now Ash has to deal with a Mega-powered Garchomp to boot. It was the perfect setup for the battle to come. We’d just been given Chekhov’s Key Stone; it would be wrong not to use it.

If you watched Ash and Cynthia’s showdown, you already know that isn’t how things played out. After taking down three of Ash’s strongest Pokemon in quick succession, Cynthia decided to Dynamax her Togekiss instead of Mega Evolving Garchomp. In response, Ash unleashed his Mega Lucario – the Pokemon Cynthia was most worried about defeating – and used it to knock out not just Togekiss, but Garchomp as well. How did Cynthia blow such a huge lead and power up the wrong Pokemon? Many have been screaming ‘plot armor’, but I think that oversimplifies that fight and disregards how masterfully Cynthia played. Ash bested his opponent, but this was a fair fight between two exceptionally skilled trainers – not the free pass for Ash some are making it out to be. 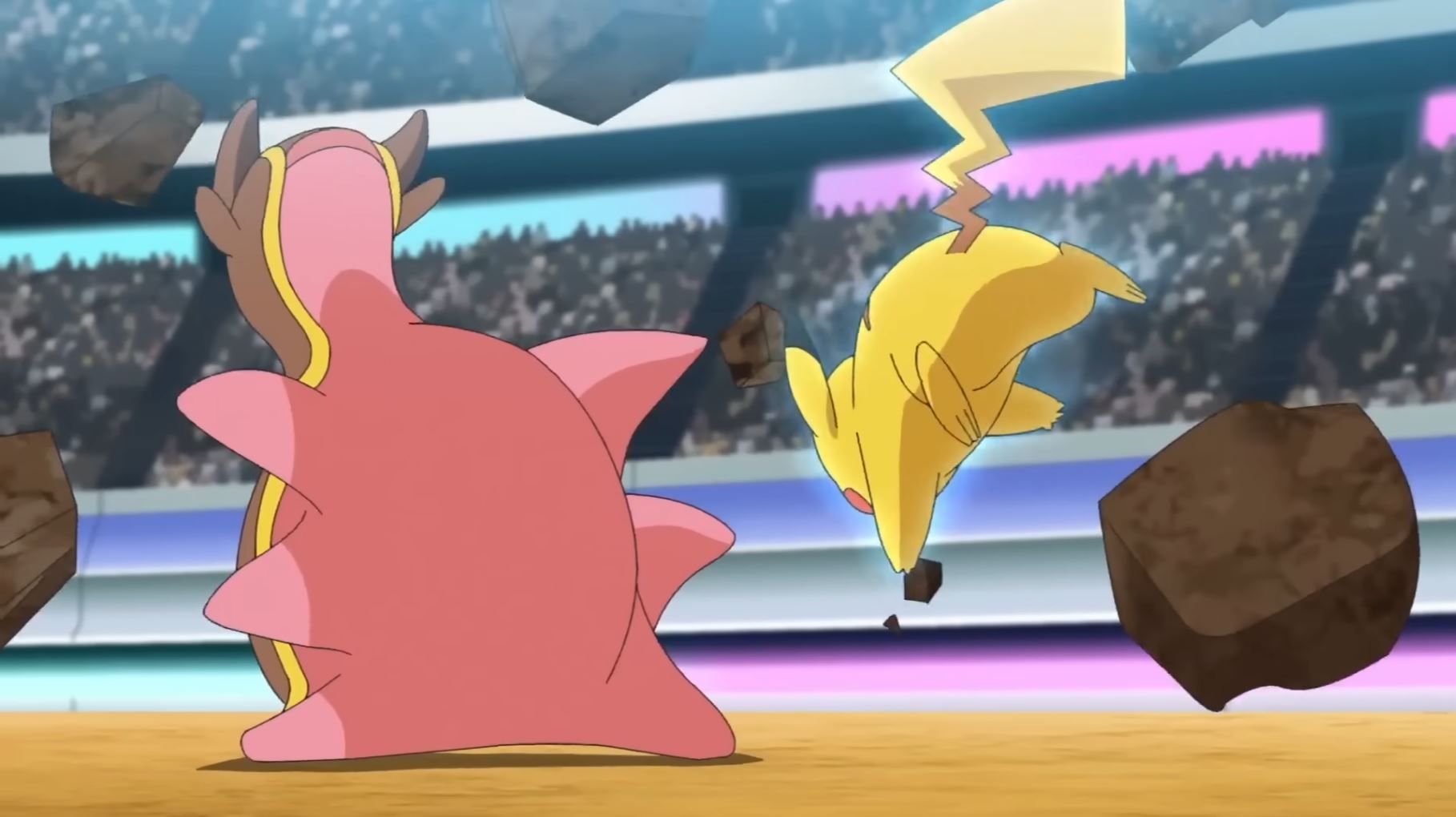 Ash started the battle at a huge disadvantage. He didn’t know how to deal with Cynthia’s Spiritomb properly, and he miscalculated Dragonite’s ability to break free from Hypnosis. After quickly losing Dragonite and Gengar, Ash was clearly on tilt. Cynthia switches to Togekiss to lure Ash into bringing out Pikachu, and when he does exactly as she predicted, she flinches Pikachu before quickly swapping in Gastrodon for type advantage. Cynthia knows exactly what Pikachu is capable of, though she is a little surprised when it quickly takes down Gastrodon. She swaps Spritomb back in and instantly KOs Pika with an impressive (and lucky) Hypnosis/Destiny Bond combo. Ash is now down to three Pokemon while Cynthia has only two. No more Pikachu means no 10,000,000 Volt Thunderbolt. One of Ash’s ace-in-hole moves has been removed from his deck.

A lot happens in between Ash losing Pikachu and winning the battle, and I think some of the nuance is getting overlooked. Cynthia sends out Garchomp against Ash’s Dracovish, which Ash suspects might Mega Evolve right away. Instead, she just has Garchomp use Stealth Rock and replaces it with Roserade. Cynthia knows Lucario is Ash’s last big threat, so it makes sense that she would want to hold her ringer until she needs it.

But things start going poorly for Cynthia. While Roserade manages to poison Dracovish, Dracovish uses Dragon Rush and knocks out Roserade. Cynthia replaces it with Milotic who tries to bind Dracovish while the poison does the work, but when two clash head on with Iron Head and Fishious Rend, Dracovish signature move, Dracovish is knocked out and Milotic is left barely standing (slithering?). That’s more or less two KOs for Dracovish, a Pokemon no one was expecting would have so much tenacity.

But here’s where everything goes completely sideways for Cynthia. Sirfetch’d comes in and clears the Stealth Rock, which shocks Cynthia, then knocks out Milotic with ease. Garchomp comes back, and Cynthia still doesn’t Mega Evolve it. Unbelievably, Sirfetch’d works Garchomp, dealing massive blows repeatedly. Garchomp charges up a Draco Meteor and it knocks Sirfetch’d out, but not before it lands one more blow, leaving Garchomp on critical status. Now too weak to Mega Evolve, Cynthia brings out her final Pokemon and Dynamaxes it. Mega Lucario replaces Sirfetch’d and the rest is history.

Cynthia made two big mistakes in this battle. She wasted time bringing out Garchomp just to Stealth Rock, and she vastly underestimated Dracovish and Sirfetch’d. These are easy calls to make in hindsight, but if you consider her strategy, all of Cynthia’s moves make sense. 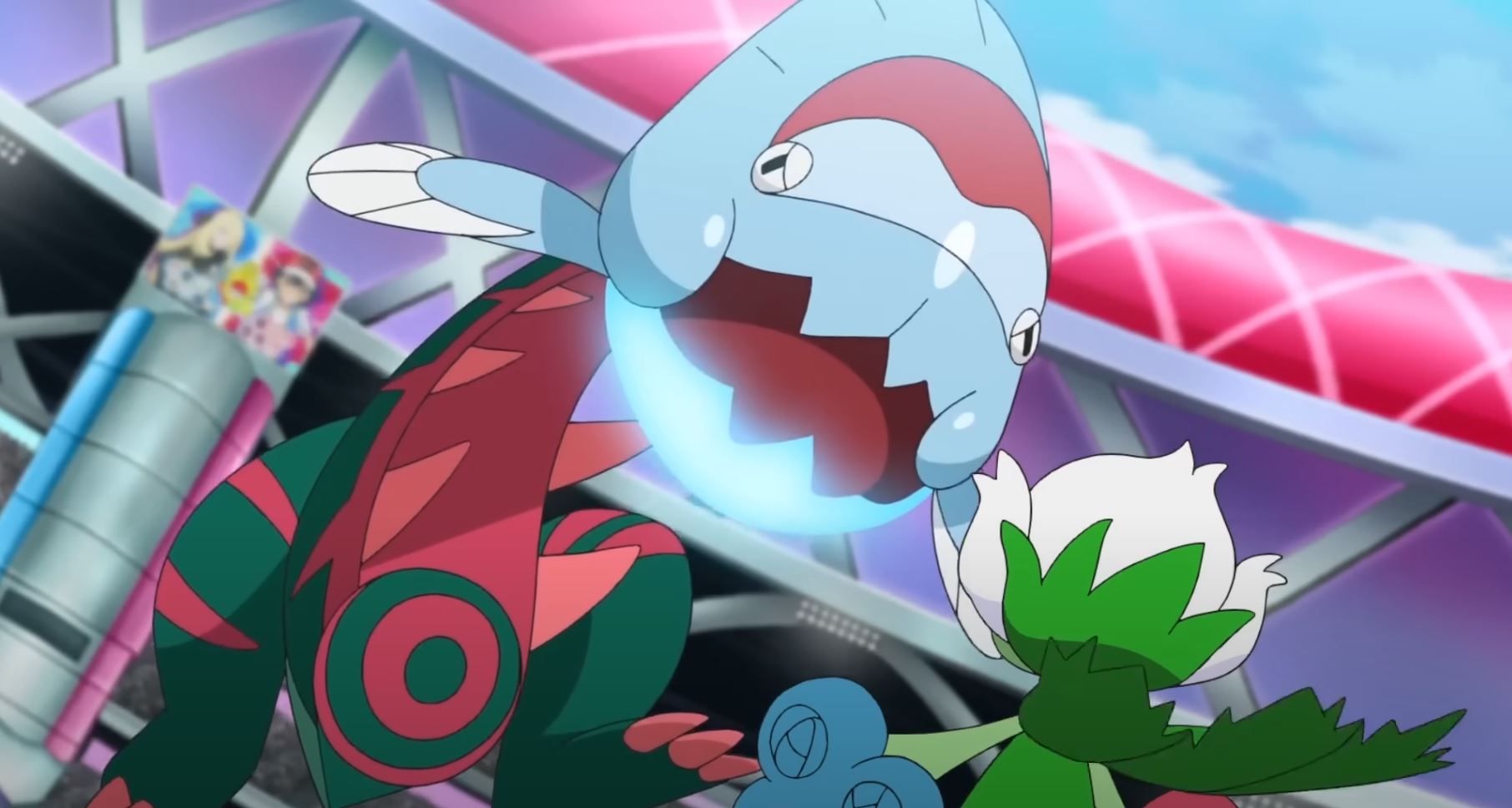 Stealth Rock served two purposes, it ensured that both Sirfetch’d and Lucario would be joining the fight at a disadvantage, and it put Garchomp – her strongest Pokemon – into the fight early. Getting Ash to overcommit by bringing out Lucario would have given her a chance to whittle it down with all four of her remaining Pokemon, but Ash stuck to his guns. She got outplayed, but it was still a logical call to make.

As for Dracovish and Sirfetch’d, they were easy Pokemon to underestimate. Ask yourself if you really thought those two would be heavy hitters in the Masters’ Eight tournament. When Ash’s Greninja reappeared, I thought for sure one of those Pokemon was going to get benched. This is why Ash is such an incredible trainer though. His confidence as a trainer makes his team stronger than they have any right to be. Lucario may have cinched it, but Dracovish and Sirfetch’d turned that fight in Ash’s favor.

After Cynthia lost Roserade and Milotic, there were different choices she could have made. Togekiss could have come out to clean up Sirfetch’d with Flying-type moves, or she could have Mega Evolved Garchomp right away, but she thought she could finish off Sirfetch’d with ease and then decide which of her last two Pokemon to power up. She misplayed to be sure, but there’s a difference between screwing up and throwing the game. In the end, it was a spectacular match for both trainers. Cynthia was so shocked by Sirfetch’d and Dracovish – Ash’s two Gen 8 Pokemon, mind you – that she decided she’s not ready to retire. Cynthia is one of the top four trainers in the world, but like all of us, she still has a lot to learn. Meanwhile, Ash earned his victory, not through plot armor, but through determination and smart play. That’s the mark of a great Pokemon battle, and this was one for the books.