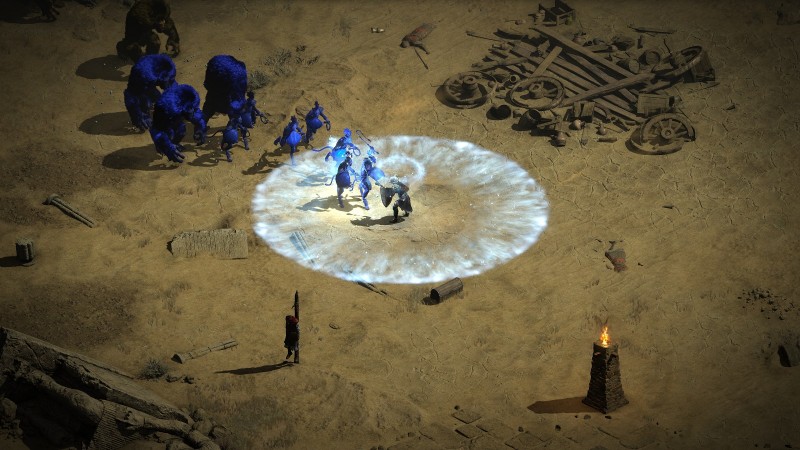 Blizzard has elaborated on some of changes they’ve made to Diablo II: Resurrected based on the Technical Alpha test period.  As you may recall, I was quite smitten with my exploratory period in the Tech Alpha, and basically kept swapping back between the old graphics and new options with the tap of a button repeatedly in awe. Again, what the Vicarious Visions team has put together for the first few acts that we’ve seen is already quite impressive. Blizzard has a larger outline and documentation of how they’re using the feedback and discoveries from that test period in a blog here that you can check out, but let’s hit some of the major beats.

First, feedback from some iconic Sorceress spells like lightning and ice storm are being retuned to capture the original design visuals and intent. Paladin’s Holy Freeze is also getting a pass on it in the same fashion. Items like potions, scrolls, and gems are getting an amplification pass to help them stand out and pop, along with weapons, quest items, and charms. This should make the stuff in your inventory stand out as you look through page after page of Stone of Jordans.

More options that don’t change the original game but give players choices to make that streamline the experience for the modern era are available. Auto-pick up gold, the new toggle to let you see item names at all times is definitely going to be a welcome addition. Now, you won’t have to hold a button down before you pick through the rewards on the battlefield, you can choose to have them all displayed at once. That’s convenient!

Blizzard has also determined that players will have three tabs in the shared stash space instead of one. This allows players to have 300 account slots to share among their characters, again with the intention of eliminating the old method of storing gear, which was to create characters that you wouldn’t ever play with called “mules” to hold all your extra stuff. Back in the old days, we’d have different mules named after what they were holding, and sometimes to get a set of gear you’d have to swap between a bunch of different characters just to get your items out of storage. Another welcome convenience addition!

Diablo II: Resurrected is slated to launch on September 23. I can’t wait to go back and do some Baal runs! For more details on everything that Blizzard is changing based on lessons from the Tech Alpha, be sure to check out the full post here.