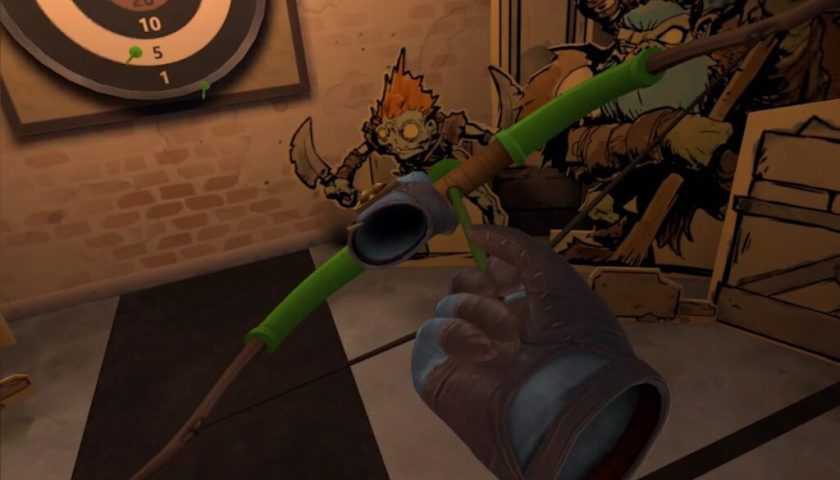 Social VR, I’ve learned, is all about context.

Last week, for example, I had an underwhelming experience inside Horizon Venues’ Foo Fighters ‘concert’, in which a flat-screen performance sank into the background whilst virtual avatars ran around talking over the show and generally getting in the way. I wondered why anyone would be attracted to this sort of event whilst the technology remained so far behind the real thing.

As with the social space for Resolution Games’ Blaston (or Echo VR’s own spaces), Heroes’ Hangout is a modest exploration of what spatial gaming lobbies can be. Up to 12 players can join rooms either private or public to meet with friends or other players. From there, they can pick up the rule book to one of Demeo’s existing three campaigns, place it on a table and three others can come and join in.

It’s a simple and effective idea, enhanced by its set dressing. Just as the core game emulates a heated game night with friends in an 80’s basement, Heroes’ Hangout feels like a visit to your local gaming store, where you can browse comic books and play minigames. These are fun little distractions, like target practice with a plastic bow and arrow, and a more robust arcade game played inside a cabinet. Hauntlet, as it’s knowingly called, is a simple top-down shooter that you control using the Touch sticks and buttons, serving up an amusing time-waster as you wait for others to join you.

None of this is especially groundbreaking, then, but it is a really beneficial addition to an already great game that will make it easier for anyone searching for new teammates to get into matches. You can, perhaps, envision a time in which a hub like this would let you jump between any of Resolution Games’ offerings but, as it stands, this is a great place to start building on a more focused and genuinely useful form of social VR.

Heroes’ Hangout arrives for the PC VR and Quest versions of Demeo as a free update on February 24.