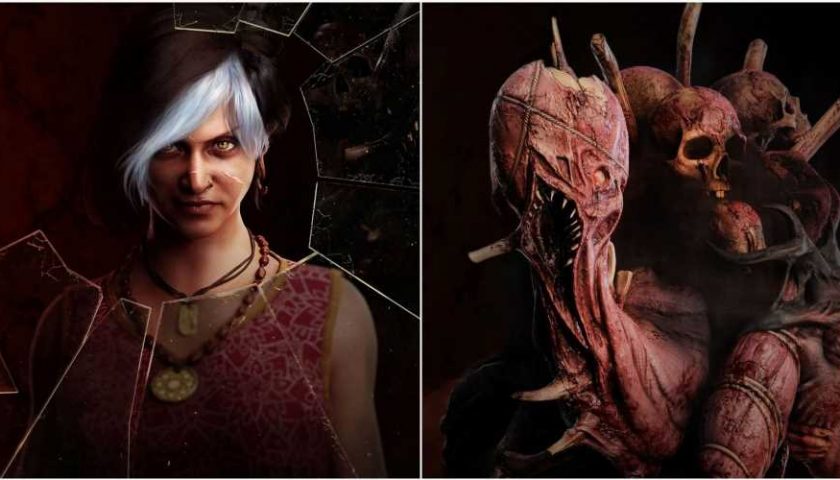 Behavior launched Chapter 24: Roots of Dread on June 7, bringing a new killer, survivor, and map to the Entity's realm in Dead By Daylight. Along with that juicy new content comes the long-anticipated loadout builder. Finally, you can have up to three saved loadouts for both killers and survivors, allowing more ease switching between things if you start to get bored. What is most exciting though is The Dredge, Haddie Kaur, and the Garden of Joy, all three new pieces of content to play with.

The story of Haddie and The Dredge is one of Dead By Daylight's more horrific backstories, and in a game like this that is saying something. The Dredge is the manifestation of a community's fear and hatred, brought on by the infamous Otto Stamper. Though never seen in game, Otto is a recurring character in Dead By Daylight lore, always involved in nefarious schemes. This time he was leading a Jonestown-like cult in the aforementioned Garden of Joy, where no one was allowed to feel any negative emotions. As you reader can probably guess, that went very poorly and The Dredge was formed upon the scattered bodies of the cult members after a horrific climax. Later on, Haddie would visit the site of the massacre and use her psychic abilities to peer into the past, learning what happened there.

One of the absolute least-humanoid killers released to date, The Dredge is terrifying to play against. Between jump scares from lockers to its map-wide darkness ability there is little survivors can do once Nightfall comes to not be scared out of their pants.

In an odd way, The Dredge is a very straightforward killer. It shines in the chase and does not have a way to slow down the game besides getting downs; your success will come down to how well you can manage its power.

There are two main parts to The Dredge's power: the Gloaming and Nightfall. The Gloaming is its main source of chase potential; with three tokens, The Dredge can activate its ability and turn incorporeal, leaving a remnant behind. While in this state, The Dredge can teleport to any locker on the map, and each teleport consumes one token. Exiting a locker or returning to the remnant will end the Gloaming, putting it on cooldown for 12 seconds and replenishing the tokens. Throughout the match, using this power will fill your Nightfall meter. When full, Nightfall automatically begins, plunging the survivors into almost total darkness for one minute, and making you undetectable.

Yes, this power is somewhat complicated to use. It will definitely take getting used to, especially to unlock its chase potential. Once mastered though, it can be especially deadly on jungle gyms throughout the Entity's realm as the lockers provide you a way to break the loop. Map control is also a strong point with The Dredge as it can chase survivors somewhat far from its protected gens, and teleport back with ease.

Dissolution is a very situational perk, but one that can provide a ton of value. For up to 20 seconds after a survivor is injured, any dropped pallet they fast vault while in your terror radius will immediately break. There are a lot of conditions to make this perk activate, but those moments when a survivor is trying to loop you at a shack and suddenly the God Pallet breaks will be one to remember.

The Huntress and The Trickster will absolutely love Darkness Revealed as they have to search lockers constantly to replenish their abilities. With this perk equipped, any time you search a locker, all survivors' auras within eight meters will be revealed to you for up to five seconds.

In moments while playing Huntress, if you're in a chase and suddenly run out of hatchets this perk is going to help figure out where those pesky survivors ran off to.

Septic Touch is the final of The Dredge's perks, and quite honestly maybe one of the best. Being able to passively apply Exhausted to survivors is quite powerful. If a survivor is healing someone in your terror radius, chances are it is an emergency situation.

You could almost make a game out of it, pretending to not see them going for a heal and then whipping around and suddenly they are Blind and Exhausted and have very little chance of escaping the chase.

The heroine of this chapter, Haddi has actually appeared quite a bit in previous tomes throughout Dead By Daylight's history. As early as Tome Six, we knew of an Indian psychic podcaster who investigated the supernatural. As a psychic, Haddie's perks do a great job of showcasing her abilities to calm down and look through the muck to see her objective.

As with all survivors, playing her is purely your preference. It may be worth it to get her though, as two of her three perks can be quite helpful in specific builds. Flashlights are controversial in this game, but those who love them will want to grab Residual Manifest for sure. Not revealing to the killer what kind of survivor you plan on being in the loading screen can give you that early edge needed to win the game.

Solo-queue survivors finally have a good alternative to Kindred as a means to not be totally ignorant of what their teammates are doing. Inner Focus lets you see other survivors' scratch marks, and the killer's aura when one of them loses a health state near you.

Is it the most optimal perk to run? No, not really. But it can really make your life easier when surviving solo against strong killers. Simply knowing what your teammates are doing and where the killer is can change the game.

The flashlight version of Pharmacy, Residual Manifest will guarantee a flashlight when rummaging through your first chest of the game, and it inflicts 30 seconds of Blindness on any killers unlucky enough to get caught.

This is, well, a meme perk. Unless you happen to go up against something like a Scratched-Mirror Meyers where they completely rely on their aura reading, Killer mains learn to find survivors without the need for aura reading perks. Maybe if you are lucky you can pull off negating BBQ and Chili, however, even that is going to be difficult to do.

Overzealous will pair very nicely with a perk like Inner Healing. Every time you cleanse a totem you gain up to six percent repair speed, but it deactivates if you lose a health state by any means. So if that happens, you have Inner Healing to heal yourself back up. Rinse and repeat that up to five times a match if you can find all the totems, and you are bound to if not win, at least annoy the heck out of killers.

The Garden of Joy is the centerpiece of the new realm within the Entity's grasp, Withered Isle. The location of the cult massacre, it has been warped by the Entity and presented to you the player as a mishmash of calm and creepy. The outside is almost peaceful, whereas once you delve deeper it appears red and dark, full of mysteries. Behavior captured the essence of psychological horror perfectly with this map; pristine on the outside, rotten on the inside. It fits the theme of the chapter as a whole.

In terms of gameplay, like all maps that have a large structure, killers that can bypass floors of buildings will have a much easier time. The Nurse, of course, will easily catch survivors throughout the house. The Dredge itself can do well on this map, as you can leave your remnant on one floor and corral the survivors into that area to suddenly snap back and punish them. Unfortunately, this map is on the larger side at 164 square tiles. Survivors who spread out early will have a huge advantage.

In addition to the new characters finding their way into the game, a new general killer perk has come to play. Shattered Hope is a soft answer to the power that boon totems bring to the table. Anytime you as the killer snuff out a boon totem, that totem is now destroyed (meaning it cannot be relit by survivors) and all survivors in the radius of the boon totem have their auras revealed to you.

The second part of the perk is nice, but the real benefit is taking away a survivor's ability to keep planting totems. They are complained about for a reason, as they provide immense support to the team for relatively little investment.

Changes To The Pig

In the final big piece of news coming with Chapter 24, we have some slight but significant changes to The Pig. Behavior added an extra jigsaw box to all matches, and survivors are guaranteed to find a key by their fourth box.

The developers clearly stated that keys can still be found earlier, but it will never take more than four tries. The reason for this change is that Pig players could easily cheese a kill by camping the last box for trapped survivors. Now there is at least a chance and a choice to be made, allowing for counterplay which is what Behavior strives for.