The moment I set eyes on Dave the Diver, I knew it was a game I had to play. A beautifully colourful restaurant simulator that has you scouring the ocean for ingredients is right up my alley. It might be my alley, it’s so on the nose. Entering Early Access on Steam later this month, Dave the Diver does a great job of clashing two different genres together.

First there’s the restaurant gameplay. Your nights are spent operating a sushi joint, and almost everything falls on your shoulders. You decide what goes on the menu, you manage the hiring and training of extra staff, and you even decide what new dishes the cook, Bancho, should research. Once the restaurant opens, it’s all hands on deck – that means serving the food yourself, grating wasabi, pouring green tea, and clearing up after messy patrons. Most of these tasks come with Cook! Serve! Delicious!-style minigames that put the pressure on, which only mounts up as the restaurant gets more popular. 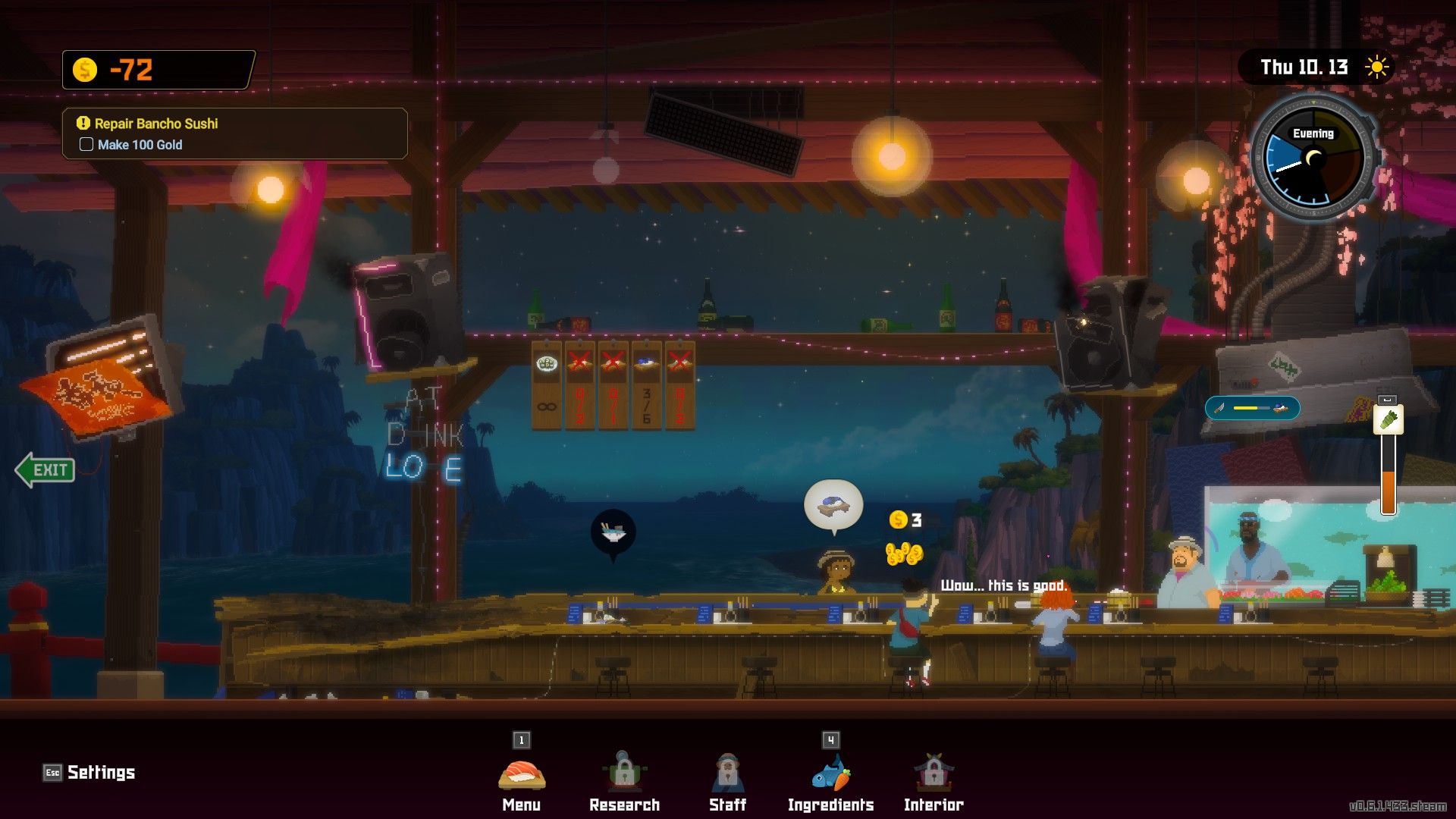 Breaking up the nights of service is the second brand of gameplay that Dave the Diver serves up. The restaurant relies entirely on Dave’s efforts to acquire ingredients, which he finds exclusively in the Blue Hole, a region of the ocean filled to the brim with sealife. This amounts to a 2D plane filled with fish to catch, whether with nets, harpoons, or actual fucking guns. That’s right, the game hands you a decent cache of firepower, and there’s not much stopping you from using these guns to blast away the harmless fish just minding their own business – fish shot to bits offer up fewer resources to cook with than fish caught in less brutal fashion, but the sea’s bounty is so great that you’re unlikely to care. Even when going up against nasty sharks, breaking out the firearms feels a bit… unfair. That said, let your guard down, and it’s Dave who ends up battered.

Exploration is dangerous, and it’s for that reason that you’ll want to keep your equipment up to date. Upgrading your diving equipment lets you plumb deeper depths, stay underwater longer, and deal more damage with your harpoon. This is important – the difficulty can ramp up quite quickly as it’s easy to stretch yourself too far, or dive just a little bit too deep. More than once, I’ve cursed my hubris for diving too deep, stuck watching Dave flounder about as he runs out of oxygen. There’s no true game over, but the loss of all but one of your items upon your ‘demise’ doesn’t feel great. Luckily, making money and collecting upgrade items is pretty easygoing, so it’s not long before you can buy some substantial upgrades that make a huge difference to your gameplay experience. 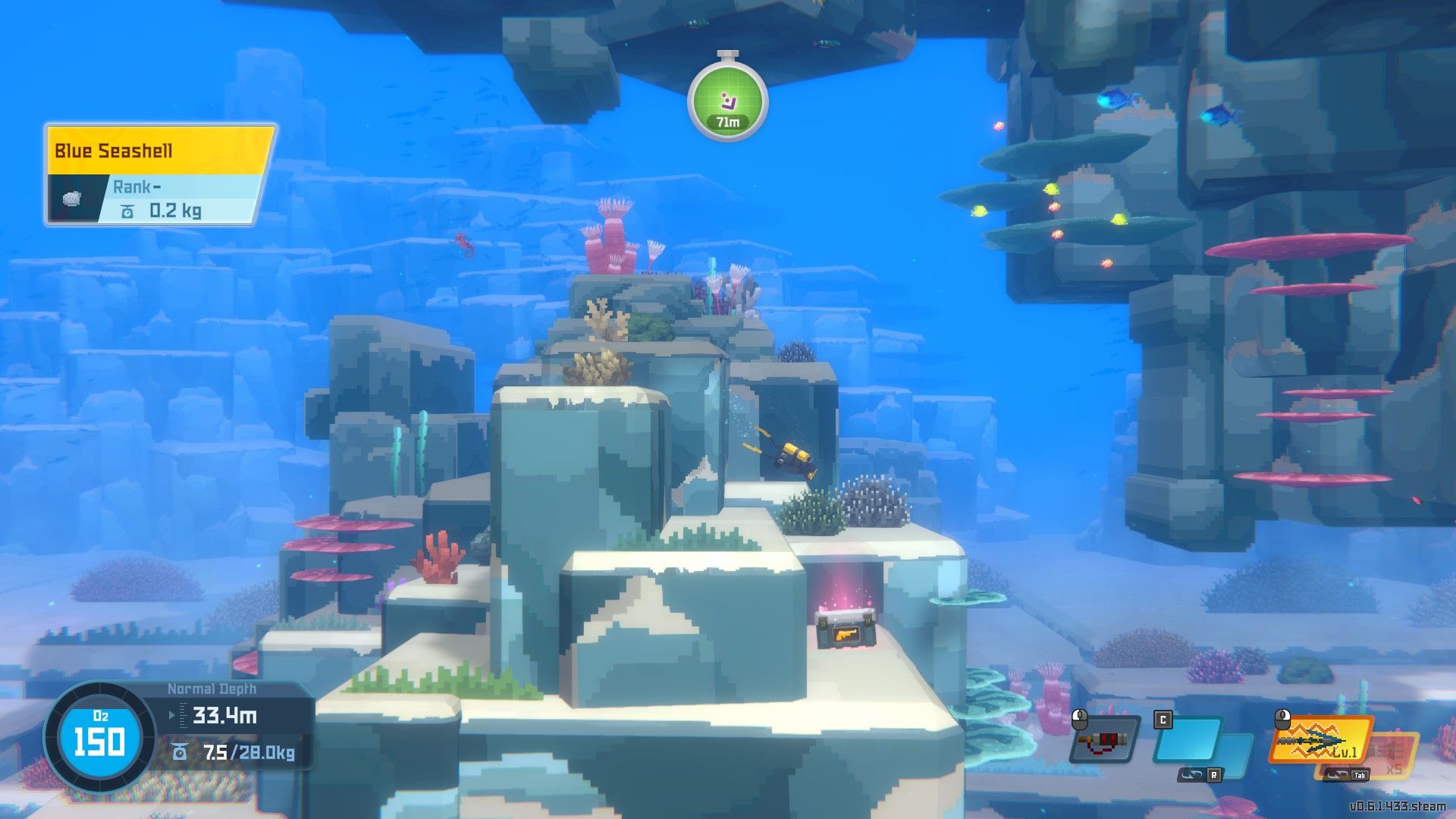 Supplementing the gameplay loop, which consists of two bouts of exploration for every night at the restaurant, are a whole bevy of extra features to play with. Decorating the restaurant with fancier items is nice, there’s an incredibly charming Instagram stand-in to play with, a thinly-veiled Pokedex-but-for-fish tracks your completionism, and an optional quest list masked as ecological research. These are largely integrated well into the game with its phone-style menu, and they are all introduced with flimsy excuses that underline the game’s rather tongue-in-cheek humour – the boy who gets you to download the not-a-Pokedex app is dressed in Ash Ketchum’s exact outfit, for example.

Dave the Diver’s narrative feels a little overwhelming at points – I have not yet had one day go by without at least one story beat hitting me or a new character showing up either at the boat or the restaurant. The quests come thick and fast, and the tone shifts are hard to predict. One day you’re helping some archaeologists discover an ancient civilisation of merpeople, the next, you’re having an underwater shootout with some dolphin poachers. It feels like the devs threw every idea into the pot, hoping that something would rise to the top. I don’t think it’s bad, per se, but the events could be spaced out a bit more to let players breathe. 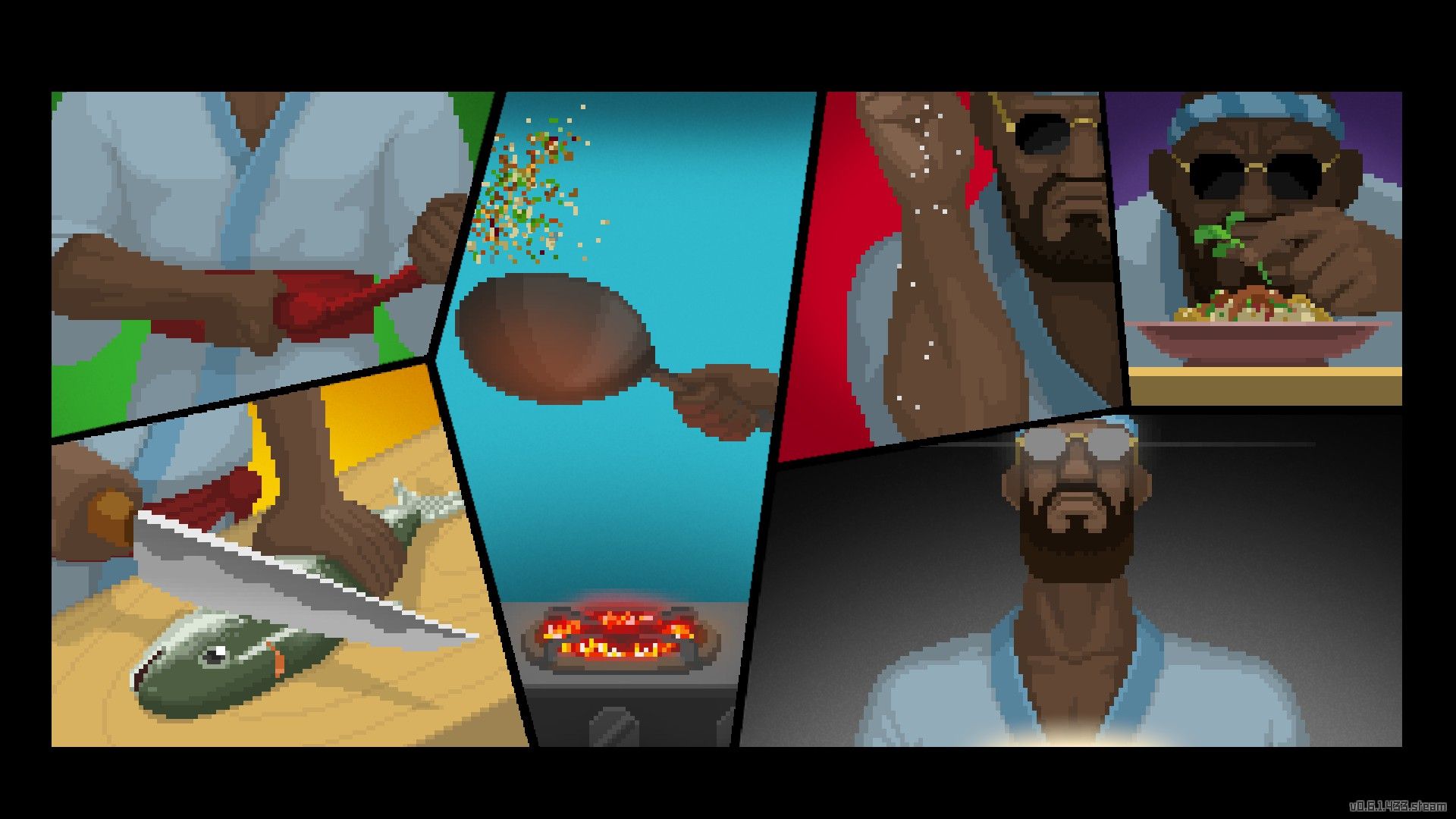 That said, the game is utterly gorgeous. The sprite art and animation are really wonderful, and I have to give special props to how great the fish look – both when swimming in the sea and plated up in the restaurant. I found the close-ups provided through the Cooksta app particularly appealing, and I’m not even into sushi.

While I still feel a little bemused at how much violence is pushed in this pleasant-looking game – you can get poisoned harpoon tip upgrades for some codsforsaken reason – I’m having a ton of fun with it. There’s something incredibly satisfying about how successful you can make your restaurant, largely due to how it’s solely down to your preparations, and while I still feel a little gillty taking huge guns into the sea, you betta believe it feels great to fight off a longnose sawshark with only a few seconds of oxygen left. Dave the Diver has me hooked.