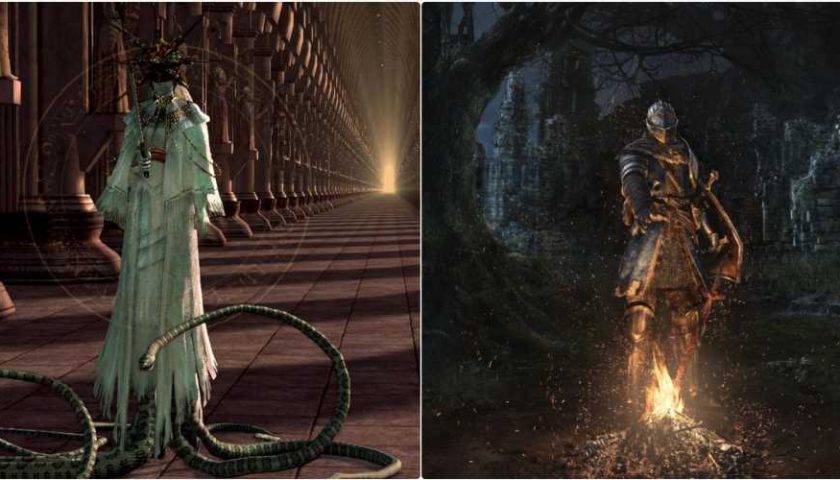 Dark Souls is packed full of fascinating lore, drip-fed to its audience through interesting item descriptions, finely crafted environments, and narratively tied boss fights. These serve to shine a light on supposed prophecies, questioning how far we should go to hold onto prosperity.

The deities of Dark Souls are arguably some of the most flawed, scrupulous, and morally complex characters in the series. One of these individuals is Dark Sun Gwyndolin, an optional boss that explores the history of Anor Londo, but is also troublesome to find. We’re going to explain his location, what to bring, how to defeat Gwyndolin, and the rewards for doing so.

Where To Find Dark Sun Gwyndolin 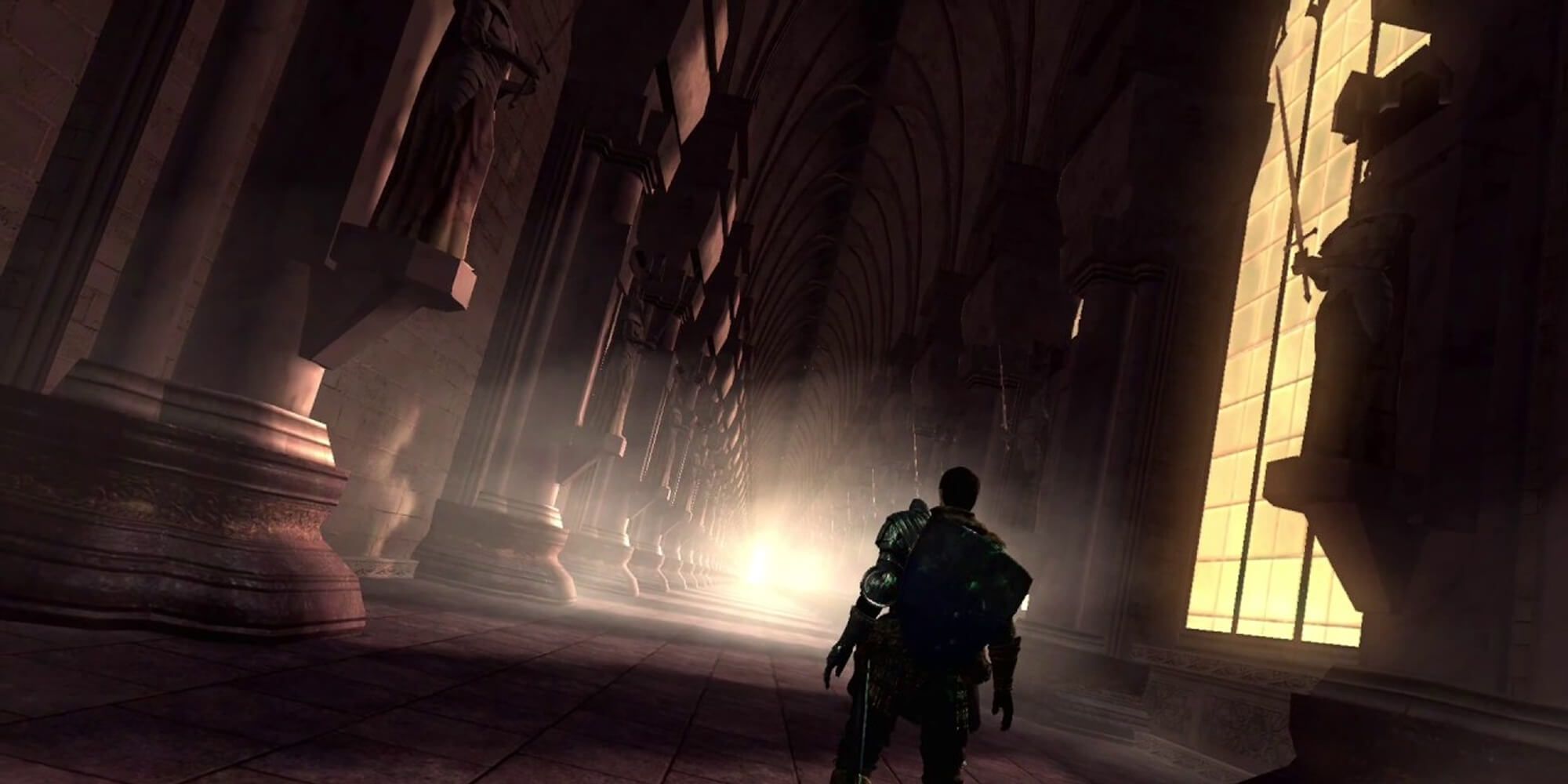 In Anor Londo, go to the Staircase Tower and turn the lever anti-clockwise until it won’t go any further. Go down the stairs and head over the bridge towards the bonfire. This is the Darkmoon Tomb bonfire, but you’ll need to open the entrance to access the boss fight. There are two ways to get here:

Option 1: Use The Darkmoon Séance Ring

The first option involves getting the Darkmoon Séance Ring in The Catacombs. To find this, go across the rotating bridge trap that Patches controls and through the fog gate, this leads to a room with a staircase guarded by two skeletons, a doorway, and a breakable wall. Smash the wall and beware of the skeleton archers on the other side.

In this secret room, there’s a ledge with two more skeletons below it. Drop down the ledge and run straight ahead through the passage. A giant skeleton will drop through the ceiling, blocking the path between you and an open sarcophagus. The ring is in this stone coffin.

If you’ve got the Lordvessel and not many souls to lose, running past all the enemies to nab the ring will likely result in death, but will also allow you to respawn and quickly teleport to the Darkmoon Tomb bonfire.

Once you’ve got the ring, return to the Darkmoon Tomb and equip the ring. This will cause the statue opposite the bridge to disappear. When you reach the bottom of the staircase, do not go straight through the fog gate. Gwyndolin will warn you not to go any further and asks you to kneel on the rug. You have now joined the Blade of the Dark Moon covenant, something that will net you an achievement or trophy. Then you can go through the fog gate.

After defeating Ornstein and Smough, head upstairs to Gwynevere and receive the Lordvessel. Attack her and she will fade away, an illusion cast by her younger brother, Gwyndolin.

Anor Londo will now darken, and all enemies except for the Painting Guardians and Silver Knights will disappear. The Giant Blacksmith and Fire Keeper will remain.

Return to the Staircase Tower but beware the two new enemy knights at the stairs leading to where Ornstein and Smough were.

Whilst these two knights are pretty easy to defeat, focusing on the quickest of the two first will make the fight easier. Alternatively, sweeping attacks and AoE spells, pyromancies, or miracles will greatly help too.

Upon reaching the tower, you’ll be met by the Anor Londo Fire Keeper who is now hostile. You can try and run past her to avoid the fight, but once defeated, you'll get a Fire Keeper Soul and her bonfire goes out.

Be careful with fighting the Fire Keeper, as she will constantly attempt to parry your melee attacks with her estoc and parrying dagger loadout. Choose your moments carefully, opting for parries, backstabs, and using ranged attacks if possible.

How To Beat Dark Sun Gwyndolin 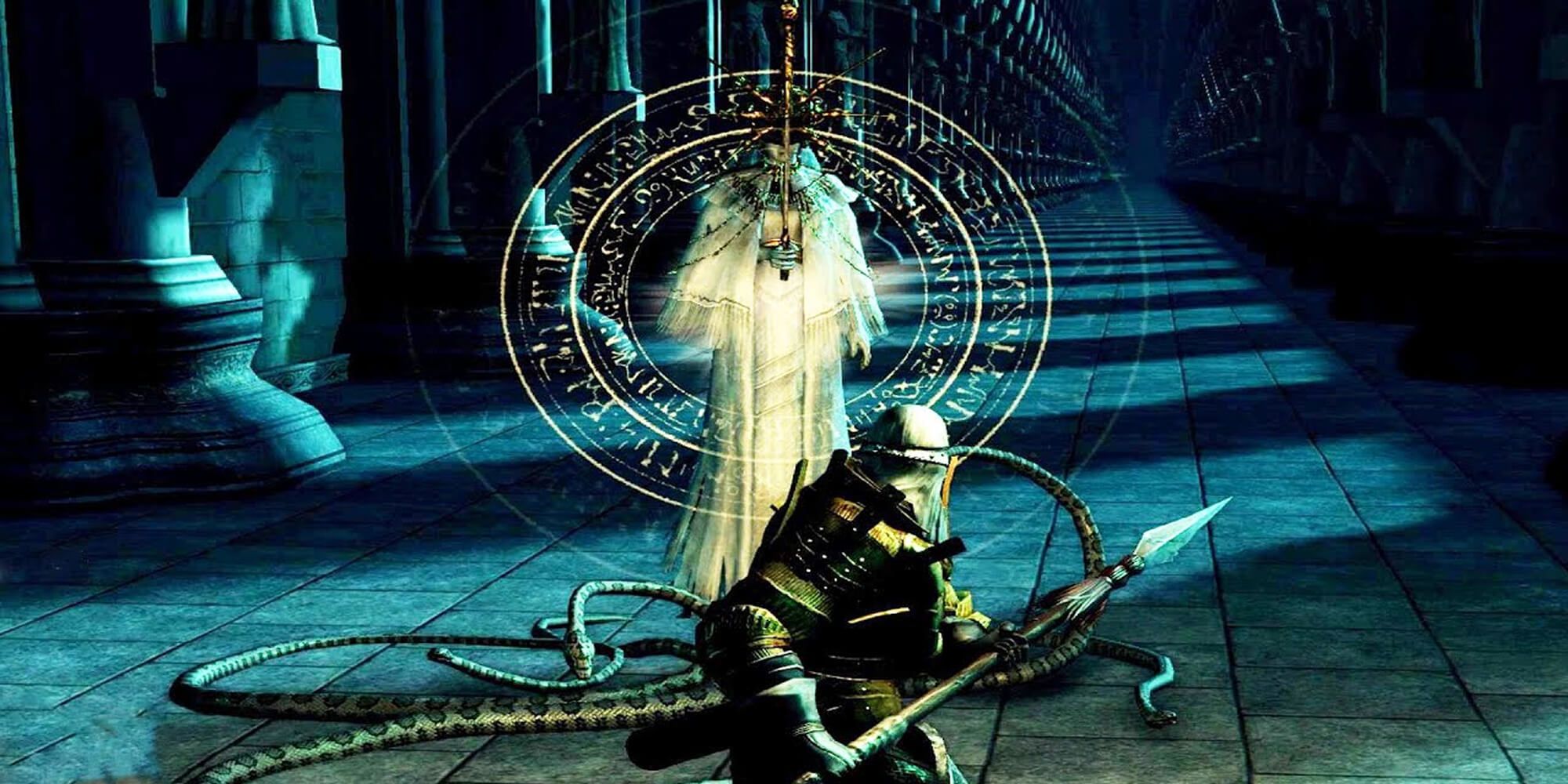 Aside from upgrading your weapons and armour as much as you can, make sure to equip armour with a high magic defence such as the Xanthous, Paladin, or Havel’s set. The Spell Stoneplate Ring and Crest Shield are fantastic for this encounter. Once you're comfortable with a loadout, head through the fog gate.

The room itself is an ‘infinite’ hallway, flanked by pillars on either side that can be used for cover, with Gwyndolin standing in the distance.

He only has three ranged attacks, one dealing physical damage and two dealing magic damage. When you get too close, he’ll teleport further down the corridor to resume his attacks, though he can be damaged during his teleportation animation.

With a high stability shield and high poise, the physical arrow attack can be blocked. The small orbs can also be absorbed but you’ll need something with high magic defence or damage reduction. Blocking these attacks will chew through your stamina though. 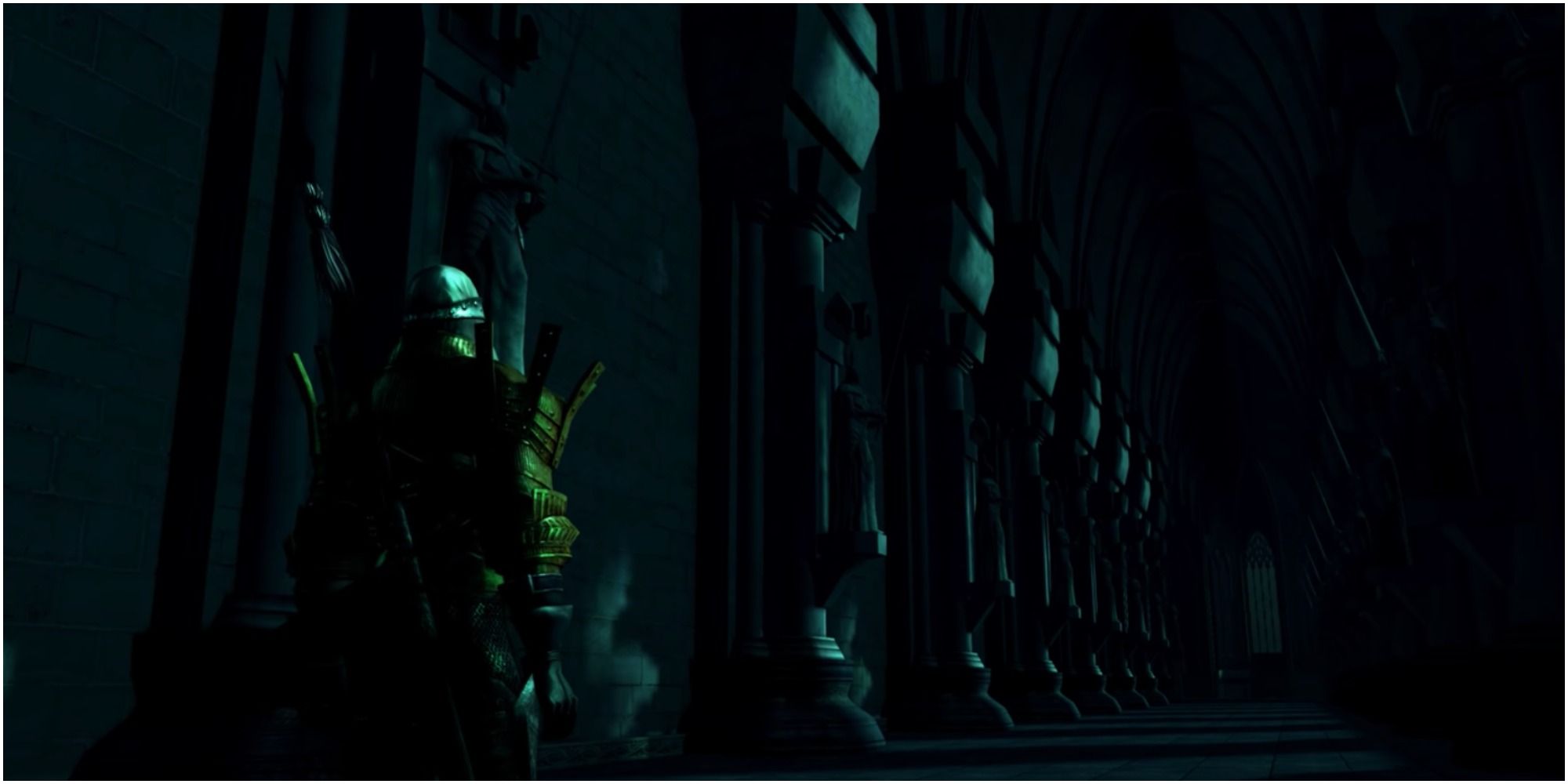 The final magic ability — a large and fast magic sphere, should only be blocked if you’re playing a particularly tanky build. On the plus side, it has the longest wind-up of all his moves and isn’t a homing projectile, so you’ll have a good amount of time to prepare for a roll, or simply run to one side to dodge it.

The key is to consistently push Gwyndolin, but how you do that is up to you. If you’re confident enough, running past and dodging his attacks will let you deal damage faster, but if you slip up and take a direct hit, make sure you’ve got an Estus flask handy.

For this play, boost your stamina recovery with the grass crest shield or green blossom, then zigzag into melee distance.

Jumping between the columns for cover is great at dealing with the arrows and small orbs, but the magic sphere is fast, passes through cover and deals massive damage. So you’ll need to move whether you like it or not.

If playing it safe sounds more appealing, we recommend running to a new pillar between the smaller attacks and switching cover during the heavy sphere attack.

Either way, be sure to two-hand your weapon for extra damage and make lighter, faster attacks rather than slower, heavier ones so you don’t risk missing your opportunity entirely. 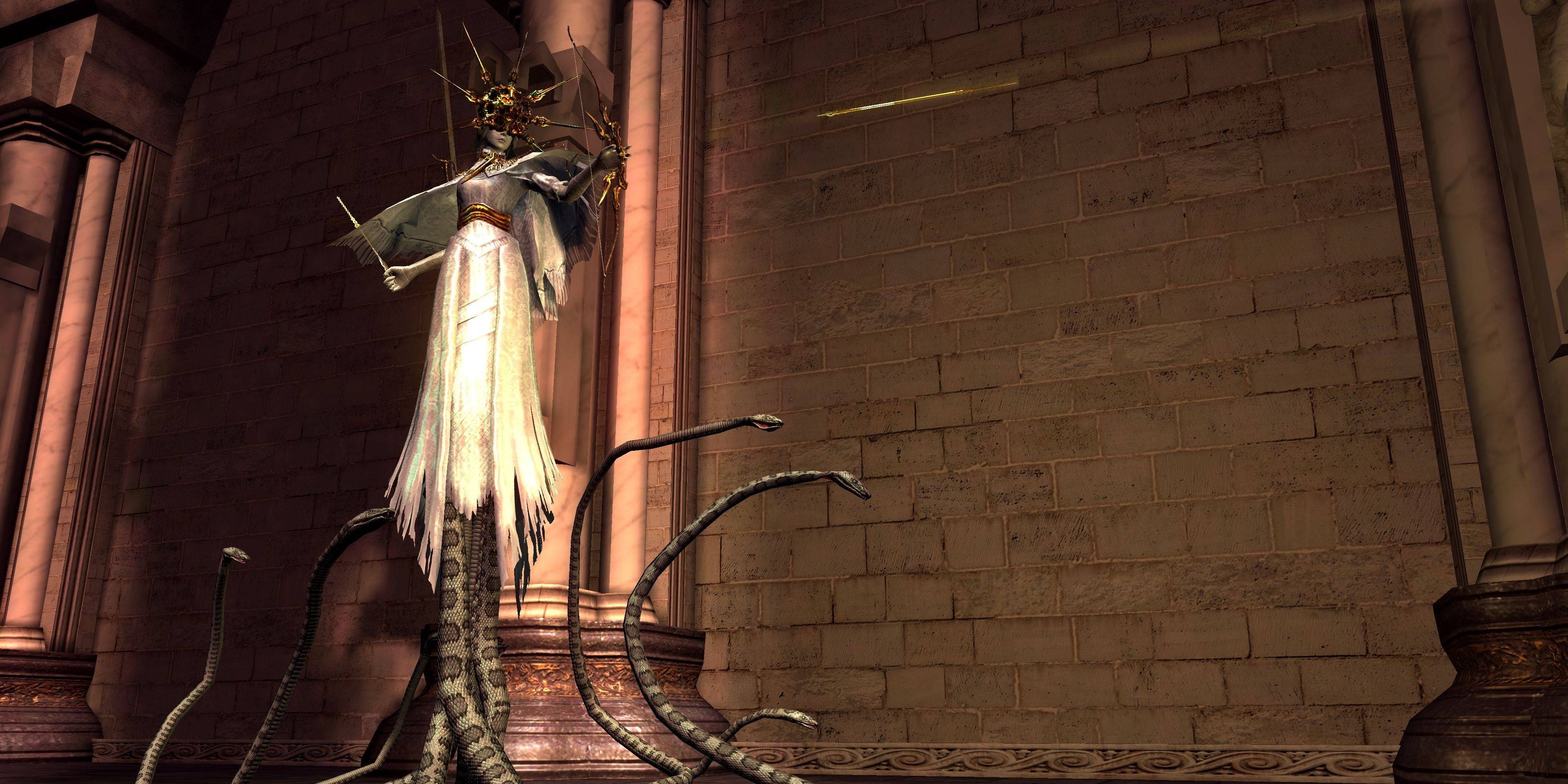 After killing Dark Sun Gwyndolin, he’ll drop 40,000 souls and the Soul of Gwyndolin. This can be consumed for an extra 16,000 souls, sold to Frampt for 20,000 souls, or turned into the Darkmoon Bow or Tin Darkmoon Catalyst at the Giant Blacksmith in Anor Londo.

Going to the end of the hallway you were fighting in will lead to a room with three chests, containing the Brass Armour set and Sunlight Blade miracle.

Finally, defeating Gwyndolin means his armour is now available to buy from Domhnall of Zena at Firelink Shrine.