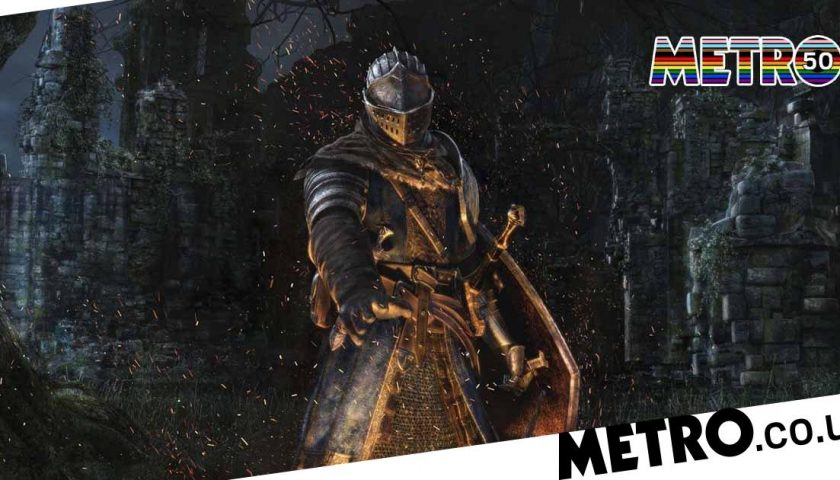 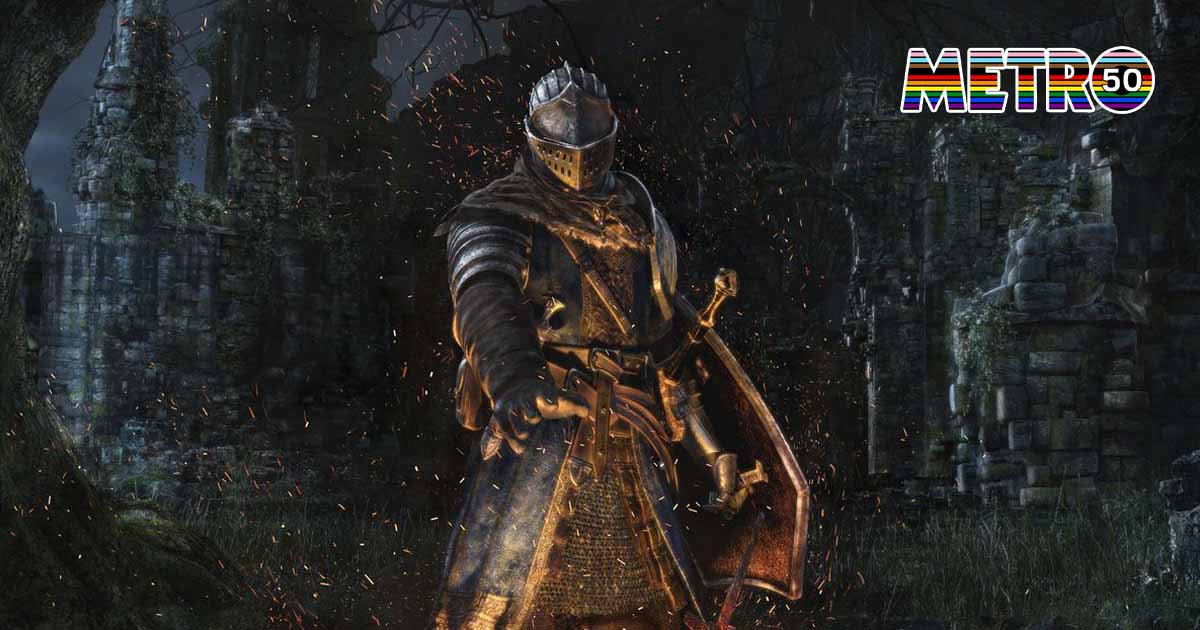 GameCentral continues its celebration of Pride Month with a look at how games like Dark Souls and Elden Ring foster a queer attitude towards reality.

Dark Souls and the rest of FromSoftware’s Soulsborne series doesn’t look particularly queer at first glance. In most of the games you have to choose between a female or male body for your protagonist, and the representation of the only main character who could be identified as trans in the Dark Souls trilogy, Gwyndolin, is controversial at best. Gwyndolin is the result of a forced feminisation and yet they are always referred to using male pronouns (in the English translation) and, in Dark Souls 3, as ‘brother’.

But, except for Demon’s Souls, the gendered body doesn’t limit what you can do and wear in the Soulsborne series. A slider allows you to modify facial features on a spectrum from traditionally feminine to traditionally masculine. In Dark Souls 2 you can change your body just by stepping into a gender-swapping coffin.

In Dark Souls 3, a ring related to Gwyndolin makes your character use the animations of the opposite gender. In the latest games you can have a traditionally feminine body and a beard. And in Elden Ring bodies are not defined by gender at all: you have either a ‘Body Type A’ or a ‘Body Type B’ and you can change it whenever you like by using a mirror. These games actually try to allow you to create gender nonconforming characters.

However, if we want to find queerness in FromSoftware’s works, we should look beyond mere representation, beyond the idea that every game is ‘straight’ when it’s not explicitly marked (and marketed) as ‘gay’ and it doesn’t feature explicitly queer characters.

Between 2012 and 2013, scholars began investigating video games through the lenses of queer theory. Here, ‘queer’ describes not only people and aspects related to the LGBTQIA+ communities, but also ‘the desire to live life otherwise, by questioning and living outside of normative boundaries,’ as explained by Adrienne Shaw and Bo Ruberg in Queer Game Studies.

Queer game studies discuss how game narratives, game mechanics, and even game interfaces can be queer and queered. How they can imagine and express non-normative, queer desires and ways of being; how this potential exists in every game, even in Dark Souls, and how it can be used in order to push forward what video games are and how they should be played and by whom.

In the second half of their book Video Games Have Always Been Queer, Ruberg reworks two previous articles of theirs and observes the prevalence of apparently unpleasant moments in video games. Moments like our failures, for example. Players of Dark Souls, a game noted for its difficulty, will be very familiar with the ‘You Died’ message, but frustrating, boring and ‘unfun’ moments are present in almost every video game.

Jesper Juul addressed this phenomenon in his The Art of Failure. An Essay on the Pain of Playing Video Games, where he claims that we play video games because we want to achieve success, and failures are there because they make this success more meaningful, they make it seem hard-earned. Failure promises success, and thus happiness.

Ruberg brings Juul’s essay into dialogue with another book, Jack Halberstam’s The Queer Art of Failure, and encourages us to see failures as something more, and queerer, than ‘stepping stones on the road to happiness.’ ‘Heteronormative common sense leads to the equation of success with advancement, capital accumulation, family, ethical conduct, and hope,’ writes Halberstam.

So, failure is associated with “nonconformity, anti-capitalist practices, nonreproductive lifestyles, negativity, and critique.’ Failure is associated with queerness: real-life systems are designed to be unequal and make queer people fail at them and at their prescribed gendered roles, so accepting failure and rejecting the very rules of the game become modes of resistance. There’s a pleasure in failing.

Even Dark Souls and Elden Ring’s director, and FromSoftware’s president, Hidetaka Miyazaki recognises this aspect of his works, even though he sees the Soulsborne games as experiences about ‘the joy that comes from overcoming hardship’ in a simulated world where problems can look insurmountable but they are actually designed to be solved.

‘I’ve never been a very skilled player,’ he told The New Yorker. ‘I die a lot. So, in my work, I want to answer the question: If death is to be more than a mark of failure, how do I give it meaning? How do I make death enjoyable?’ In Dark Souls, failures become interesting, they become stories we tell on Twitter and videos we upload on YouTube.

Lilith Walther is the developer of Bloodborne PSX, a fan demake of Bloodborne. ‘Bloodborne takes the ‘revelling in failure’ approach and applies it to a societal level’, Walther tells us via Discord. ‘The city of Yharnam and the surrounding land is being destroyed by a plague that was created by the ruling class and is only a single push away from being a post apocalypse.’

‘All your allies/friends are some sort of societal outcast (disabled folk, sex workers, ‘outsiders’. etc.), and you fight your way up the hierarchy, starting at the city streets before getting past the barriers that said ruling class put in place to keep you out.’

And bodies matter in Dark Souls. When you’re over-encumbered you can’t roll anymore, while the most skilled players bare their digital bodies; they fight naked. You train and twist your avatar’s body, you try to empower yourself and to shield yourself from a hostile world, you try not to ‘go hollow’, not to become a mindless, decaying corpse. You turn yourself into a dragon in Dark Souls and Elden Ring. You are a beast, an alien-like mutant, an outer god in Bloodborne.

The position of your body within space, its orientation, also matters. ‘Queer is, after all, a spatial term, which then gets translated into a sexual term, a term for a twisted sexuality that does not follow a ‘straight line,’ a sexuality that is bent and crooked,’ Sara Ahmedi writes in Queer Phenomenology. Orientations, Objects, Others. FromSoftware’s games are stories about physical and spatial resistance and resilience.

In these games even time is not straight. As explained by scholars like Elizabeth Freeman (Time Binds: Queer Temporalities, Queer Histories) and, again, Halberstam (In a Queer Time and Place: Transgender Bodies, Subcultural Lives) our whole life is regulated in order to promote capitalist production and consumption and heterosexual reproduction.

We are told at which age, and in which order, we are expected to study, find a job, marry, and have children. But in Dark Souls time is twisted and nonlinear. ‘We are amidst strange beings, in a strange land. The flow of time itself is convoluted,’ the knight Solaire of Astora tells you.

In these games there’s not one definitive story either. Here stories are plural, fragmented and intertwined and players can help each other unravel them. They create wikis, discussions, and videos. Players can assist each other inside the games, too. They leave messages, and they ask for help before difficult boss fights. Surviving and interpreting a Dark Souls game is a community effort.

If we look at its representational failures and its hypermasculine ‘Prepare to Die’ marketing, Dark Souls can seem very straight. But if we delve more deeply into it and we look at the way it reframes failure, community, bodies, and non-straightness of time, spaces, progression, and narratives, we understand that Dark Souls has always been queer.

Matteo Lupetti is an indie comics author and Marxist video game critic. You can find them on Twitter as @ilsignorm.

This year marks 50 years of Pride, so it seems only fitting that Metro.co.uk goes above and beyond in our ongoing LGBTQ+ support, through a wealth of content that not only celebrates all things Pride, but also share stories, take time to reflect and raises awareness for the community this Pride Month.

And we’ve got some great names on board to help us, too. From a list of famous guest editors taking over the site for a week that includes Rob Rinder, Nicola Adams, Peter Tatchell, Kimberly Hart-Simpson, John Whaite, Anna Richardson and Dr Ranj, we’ll also have the likes Sir Ian McKellen and Drag Race stars The Vivienne, Lawrence Chaney and Tia Kofi offering their insights.

During Pride Month, which runs from 1 – 30 June, Metro.co.uk will also be supporting Kyiv Pride, a Ukrainian charity forced to work harder than ever to protect the rights of the LGBTQ+ community during times of conflict, and youth homelessness charity AKT. To find out more about their work, and what you can do to support them, click here.