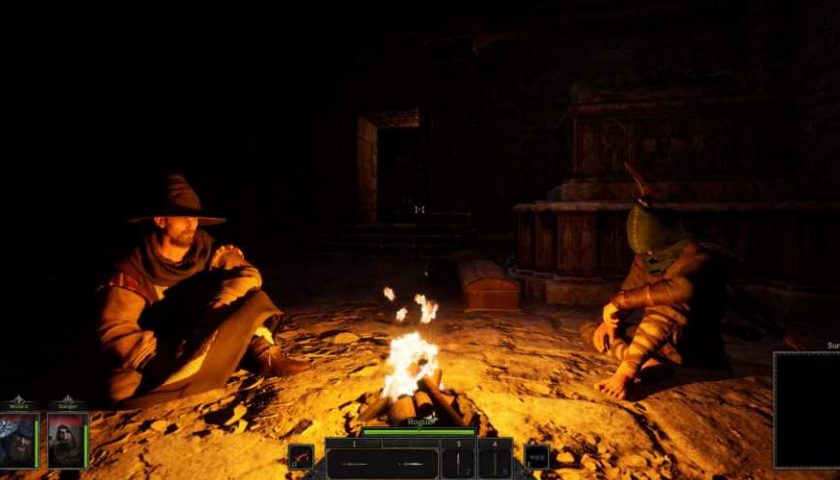 Dark and Darker just shouldn’t work. It’s a grotesque mashup of half a dozen different genres that borrows liberally from other popular games, Frankensteining familiar mechanics into something confusing and strange. Dark and Darker takes an everything-but-the-kitchen-sink design approach that seems like it should be a disaster. And yet, it totally works. Somehow, indie studio Ironmace has managed to mash together a classic dungeon crawler, a battle royale, and a Tarkov-style multiplayer survival game to create something that is greater than the sum of its parts. It proves we haven’t yet seen the extent of what battle royales have to offer.

Dark and Darker starts out like a traditional first-person dungeon crawler i.e. Ultima or Legends of Grimrock. A party of four adventurers – rogues, rangers, fighters, clerics, etc – enters a dungeon on a quest to slay monsters and collect treasure. The dungeon is full of skeletons, zombies, swinging axes, and mimics disguised as chests. You’ll need to utilize each adventurer's unique skill sets to slay the monsters and find the dungeon’s hidden treasure. From this description alone, it sounds like countless other games we’ve played before. But just wait…

The first twist is that you’re not alone. Like Tarkov or Hunt: Showdown, you enter each dungeon with a handful of other parties each looking to scoop up the treasure before you, or alternatively, wait for you to do the legwork then come in after and kill you for it. You never know whether a group of ghouls or a party of fighters is waiting for you in the next room, and if you die you lose everything you’ve collected throughout your run.

Of course, it’s also a battle royale. As the circle closes in, parties are forced to get closer and closer together, ensuring frequent fights to the death over treasure. Just before the circle closes in entirely, summoning stones will appear that provide a way to create a portal and escape. Every second matters in these final moments. If you want to escape with your rewards, you’ll have to either overpower or outsmart your opponents to reach the portals before them.

If you’re feeling confident, you can even choose to descend one floor down and start a new round. Here you’ll be matched against other players who took the dive, on a map with even deadlier monsters. It’s a good idea to build up some better gear before taking on the second floor, but that means escaping with your loot and your life multiple times in a row.

Even though you lose all your gear when you die, there’s still some progression that carries over. Experience earned will give you levels and new abilities, and anything you bring back from your adventure can either be stored in your chest or sold to vendors. Better weapons and armor will give you an advantage in the dungeon, but smart play will always win out in the end.

The elevator pitch for Dark and Darker is probably “Ultima meets The Cycle”, but even The Cycle is such a mishmash of disparate genres that this shorthand still requires some explanation. It is simultaneously one of the most classic game genres and one of the most modern, yet it somehow manages to be a totally original amalgamation. With more than a year until release, we’ll probably see some significant changes, but it’s already shaping up to be a worthwhile addition to the battle royale genre.

If you missed the last technical test, there’s another one coming October 28-30. Head over to Dark and Darker’s Steam page to add it to your Wishlist.