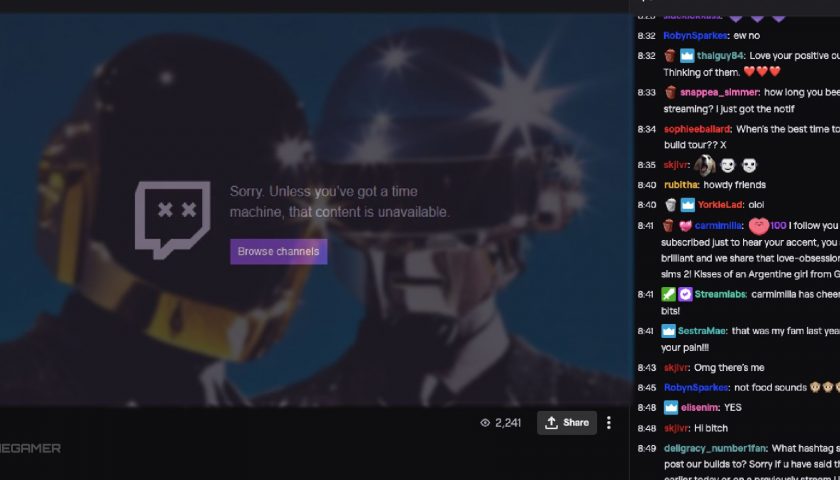 Daft Punk announced their split last February, after 28 beautiful years together. Despite many joking that it was a very French thing for the electronic duo to call it quits over eight years after their last studio album, they had been producing and featuring in songs right up until that point.

What is very French of them, however, is streaming a video of one of their 1997 concerts on Twitch, on the anniversary of their break-up, and not allowing it to be replayed once it ends. I had a flight to catch yesterday, so I missed it, and I am devastated.

According to Pitchfork, a representative did stress that it would only be available live, so if you've missed the moment, you have my sympathies. Still, there is some hope that a reunion tour or something similar could be on the horizon.

Even if the duo doesn't return to making full studio albums, it would be great to hear them on a video game soundtrack. They were approached to make the score for Lumines, but had to turn it down due to commitments on Tron: Legacy. The surge in popularity of cyberpunk video games makes Daft Punk the perfect candidate for an OST.

While we may only be dreaming of Daft Punk on an OST, the Persona 5 and Strikers soundtrack being available on Spotify is very real. The Pokemon Diamond and Pearl soundtracks are also available to listen to.

It's not all good news, however, as Nintendo recently issued so many copyright strikes against a YouTube channel dedicated to uploading and preserving the company's video game music that it had to shut down. This was followed by the company announcing it would be closing the 3DS and Wii U eShops, showing it doesn't care about preserving its legacy at all.

Anyway. Please come back Daft Punk. We miss you.