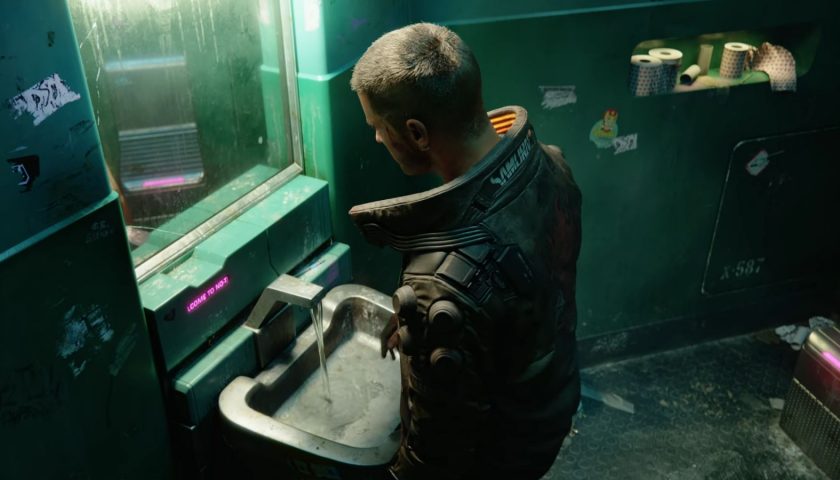 It’s fair to assume that until CD Projekt Red delivers a substantial patch to band-aid its failed launch, Cyberpunk 2077 is doomed to be deemed “Glitch City”. Another choomba to tackle the title with trepidation discovered how Cyberpunk NPC’s prefer to relieve themselves – adding to the plethora of previous finds.

Redditor oimly shared a clip from their gameplay of the action-RPG that once promised to be a brave new world of next-gen gaming. Instead, what we see is Cyberpunk 2077 fixer and owner of the Afterlife bar, Rogue Amendiares, using the toilet in a rather peculiar way. After awakening from their tech-filled slumber, V pops round to the facilities to find Rogue hovering above the lavatory throne. From what we can see, she appears fully clothed, so perhaps she was taking some much-needed contemplation mid-air.

As with any Reddit post, the true gems lie in the comments section. One spectator asked: “Is this how we use the toilets in 2077?” Another joked saying she was “going to the John” referencing Keanu Reeves’ character, Johnny Silverhand. A third pointed out that a similar occurrence happened to them during gameplay, where men accompanying NPC Carol would sit a good distance away from the objective – rendering the quest difficult to complete. Despite adding another bug to the already heaving net, a handful of Redditors believe that Cyberpunk 2077 will become “legendary” after its much-needed polish. The jury is out on when that will be.

The attention that Cyberpunk 2077 has gained since its launch at the start of December is not the kind that Polish developer, CD Projekt Red, had in mind. Instead of exploring the grunge and grime of Night City, almost every quest, area, and interaction is tainted with hilarious glitches that undermine any attempt at constructing a compelling narrative. The developer also has pending lawsuits on its plate that will no doubt take precedent before any major patch appears. At least some participants have chosen to see the comical side of the farce by creating their own PS1 trailer for Cyberpunk 2077 – combining the best of the game’s bugs with some classic PS1 glitches.

Modders have also been putting their own spin to Cyberpunk 2077 by fleshing out a world that operates a little more professionally than the one CD Projekt Red created. One turned the game isometric with a Cities: Skylines-styled mod. Another was not so successful, however, as their mod caused many NPCs’ heads to explode. Something to add to the Cyberpunk circus.

Next: Someone Turned Cyberpunk 2077’s V Into Flash Gordon With This Build