Cyberpunk 2077 was our favorite demo of E3 2018. There’s a good chance it’ll be my favorite demo of E3 2019 as well—though I’m giving Vampire: The Masquerade – Bloodlines 2 and Dying Light 2 the benefit of the doubt at least. They’ll have to come strong though, as CD Projekt has once again brought a demo that made me ask “Wow, how did they do that?”

Even having seen Watch Dogs Legion this week, which also seems to push current-gen consoles beyond what I thought was capable, I’m still amazed Cyberpunk 2077 is somehow due to release before the next-gen changeover. Last year I said that seemed impossible, and yet we’re staring down the barrel of an April 2020 release date. More fool me.

Of course, we haven’t played it yet so maybe the limitations are more obvious outside a carefully choreographed E3 demo. Once again we crammed into a dark room in the Los Angeles Convention Center to watch an hour-long slice of Cyberpunk 2077, with a CD Projekt employee behind the controls.

First up: Your character’s dead, but not. Named V, you’ve been implanted with a chip that (supposedly) holds the secret to immortality and everyone wants you dead-dead, not just sort-of dead, so they can steal the secret for themselves. It’s appropriate Keanu Reeves plays a character in Cyberpunk 2077, because it sure does sound a lot like Johnny Mnemonic.

Even his name sounds like Johnny Mnemonic. You’re also haunted by a “digital ghost,” a.k.a. Keanu Reeves’s character, named Johnny Silverhand. Which, holy hell, what a name.

The demo started with character creation. There are a ton of options—surface wiring, hair, eyeshadow, et cetera—plus the usual stat allocation. “You really think they give a rat’s dick how you look?” says Silverhand when you’re finished. 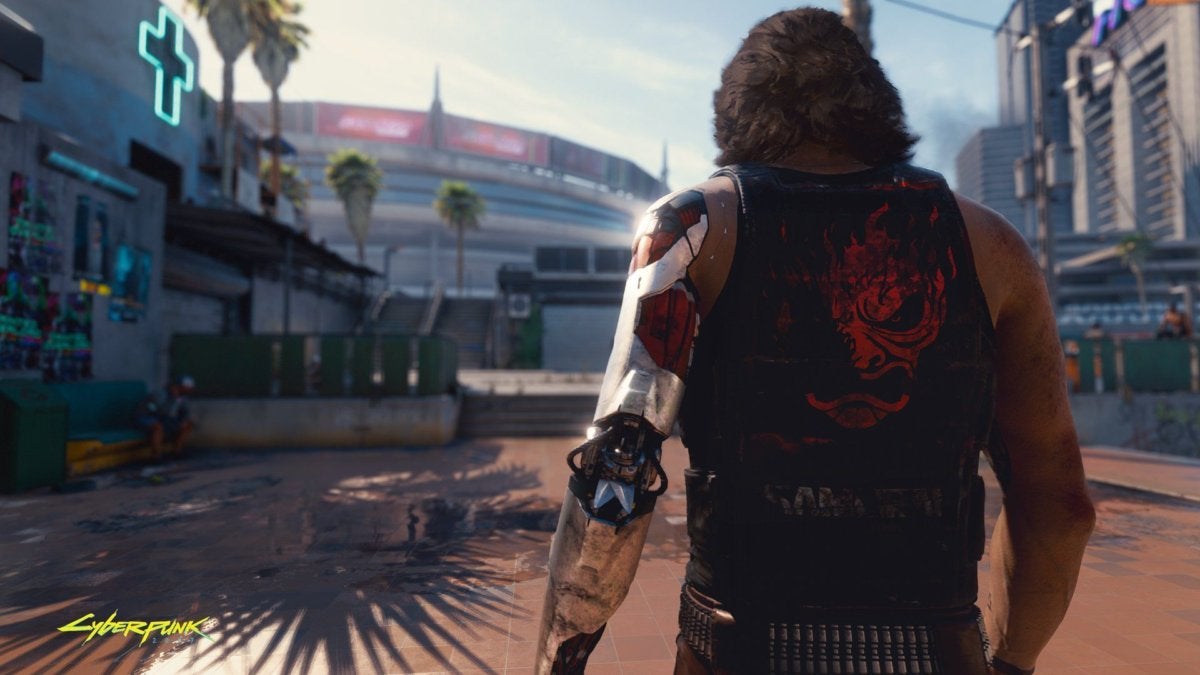 So that’s why they call him Johnny Silverhand

We then explored the district of Pacifica, and specifically a “church” of some sort. Once again, I was struck by the same thought as last year’s demo: “Wow, there are a ton of people here.” We pushed our way through a crowd of dozens, if not hundreds, of people crammed inside this brutalist building. It’s incredible, and I’m still amazed this is apparently a current-gen console game. I’ll be curious what compromises CD Projekt needs to make for that to happen.

I was struck by the same feeling when we walked down the Pacifica boardwalk, smog wafting up from the buildings, with a staggering draw distance that showed off skyscrapers, Ferris wheels, and more stretching into the distance. There’s also a day/night cycle, which adds even more complexity, riding down the street at sunset as the various office buildings begin to illuminate.

Anyway, back to the story. We went in search of mercenary work, ending up in “Rolland’s Butcher Shop,” where we met a contact who then led us to yet another location. “You guys aren’t exactly great at rolling out the welcome mat for outsiders,” said V, and yeah, apparently. 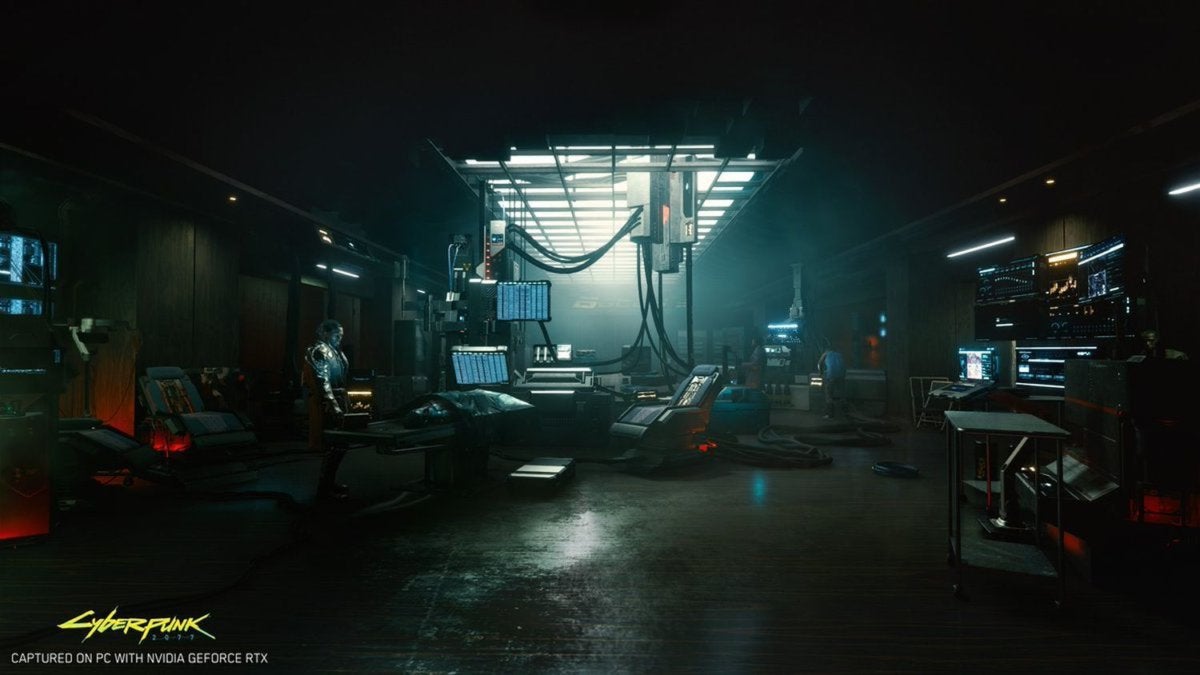 Our contact tells us about the Grand Imperial Mall, which was abandoned—until recently. Another faction, the Animals, moved in and our contact wants to know what they’re up to. One problem: Our contact, Placide, wants us to jack into his personal hardware. If you know uh, literally anything about cyberpunk it’s that jacking into an unknown deck is a quick way to die.

But we have to, so we do it. Bad news, as Placide embeds himself in our hardware to “keep an eye on us.” We’ll have to get rid of him later, most likely—unless he’s feeling generous.

We get the job though. Placide starts feeding us video clips, giving us background on our task. Meanwhile, there’s a scuffle in the background and CD Projekt calls out its “dynamic dialogue,” which allows V to comment on these background events at times, a neat touch that could make for some very different paths through Cyberpunk 2077.

V heads off to the Grand Imperial Mall, snagging a motorcycle and cranking the music. This is the aforementioned sunset ride, the city looking even more impressive at golden hour. This is also the best indication we got of Cyberpunk 2077‘s scale, as we rode past slums hidden under the highway, through the Mall’s massive parking lot, and eventually to the front doors. It wasn’t a huge distance, but the real-world scale of Cyberpunk makes it feel like a proper journey. Walking feels prohibitive. 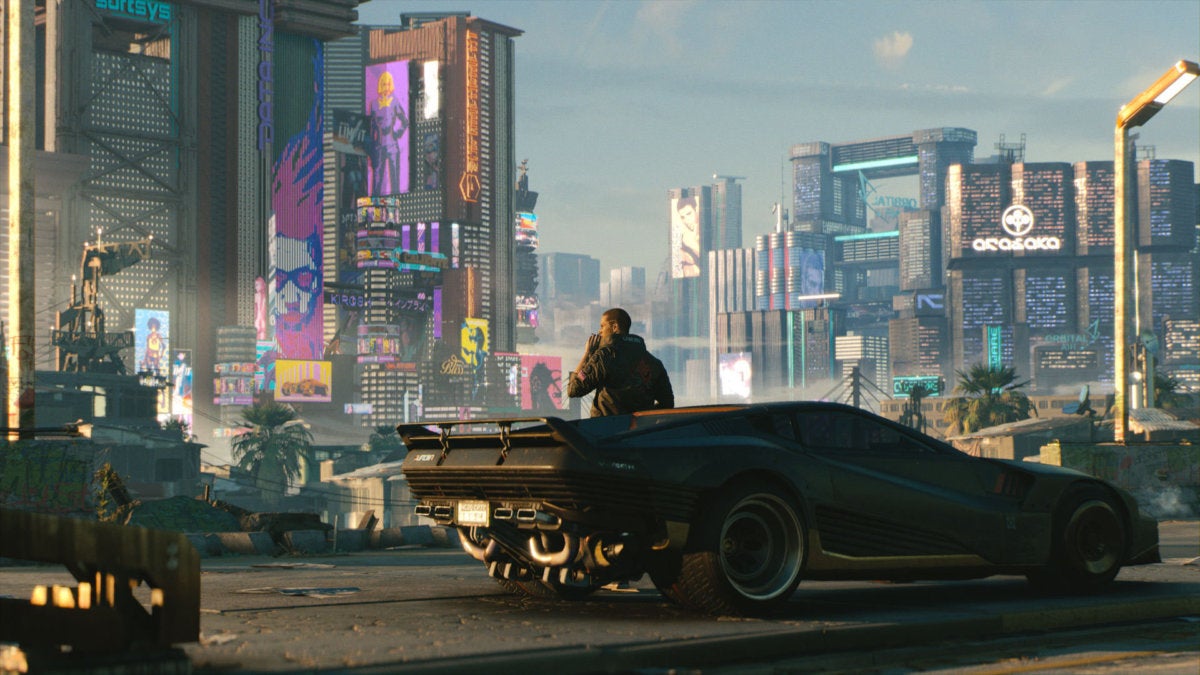 That doubles for the mall itself, which is massive. I’m reminded of Dying Light, which also had that real-world environment feel, albeit without the sort of crowds CD Projekt’s featured in its demos so far. The scale just feels so much larger and more authentic than the video game buildings I’m used to seeing.

The rest of the demo passed in a blur of stealth and combat. We jacked into a camera system at one point, which is done by way of a minigame. It’s ugly at the moment, a grid of numbers awkwardly arranged, but the goal is you’ll be able to not only access the cameras but unlock other networked functions as well if you do well enough.

Perhaps you wouldn’t want to access the cameras though. After doing so, V notices an enemy netrunner is also watching over the network, and now they know we’re here. They might not know where we are, but they know we’ve accessed the network somewhere.

Making our way through the mall, stealth isn’t limited to the usual “Creep up behind someone and snap their necks” stealth kills. There are some really fun hacking-related knockouts—a robot who punches an enemy too hard, a soda machine that ejects cans at high speed, a bench press machine that collapses on its user, and so on. 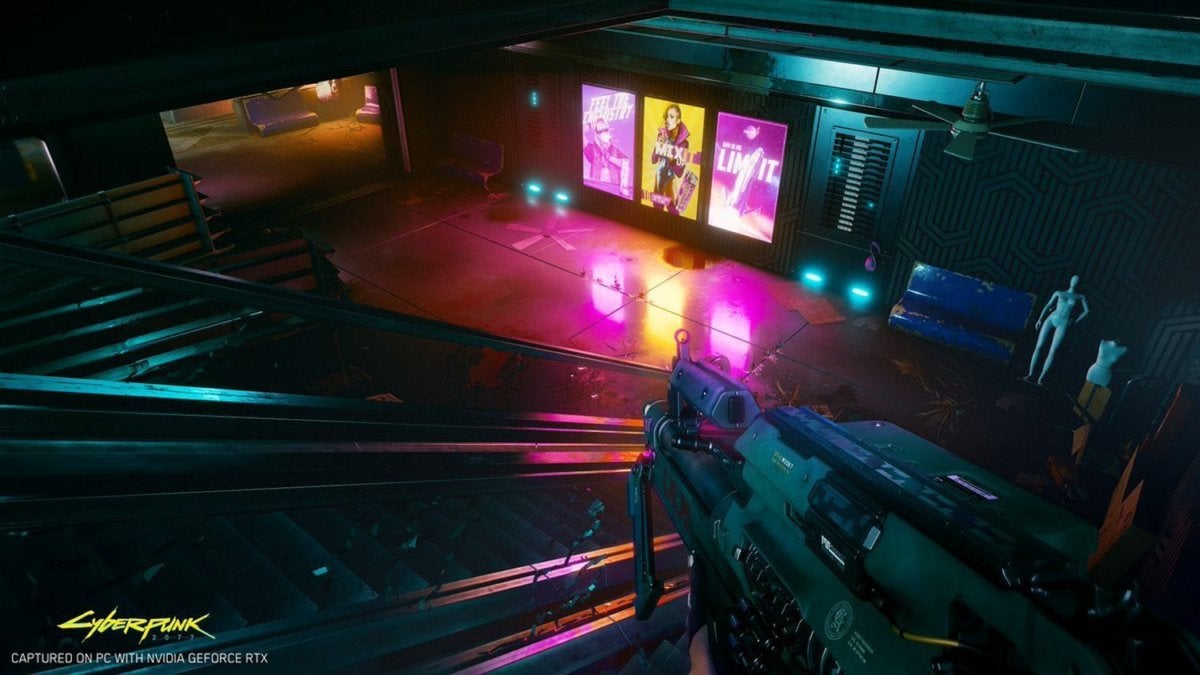 We also switched over to another, more melee-focused V to see an alternate route. This time we simply forced some doors open, avoiding the cameras and the enemy netrunner entirely.

You’ve got options. We took a quick look at the perk tree, which is vast and complicated—twelve sections, I think, each with six or seven perks. Most are standard, like hacking, assassination, sniper rifles, engineering, and so on. I think I saw “Cold Blood” though? No idea what that means. It’s also beautiful, with a pseudo-motherboard look to it. Entirely impractical for a mouse and keyboard I think, but beautiful.

Per usual, our major choice came mid-mission when we found out the enemy netrunner was an agent for NetWatch, a corporate police force. We told Placide we didn’t want to pick a fight with “the Watch,” but Placide assured us it would be him picking the fight, not us. Doubtful, but too late. We sprinted through most of the rest of the mission with our laser-garrote, which doubles as a whip in combat. 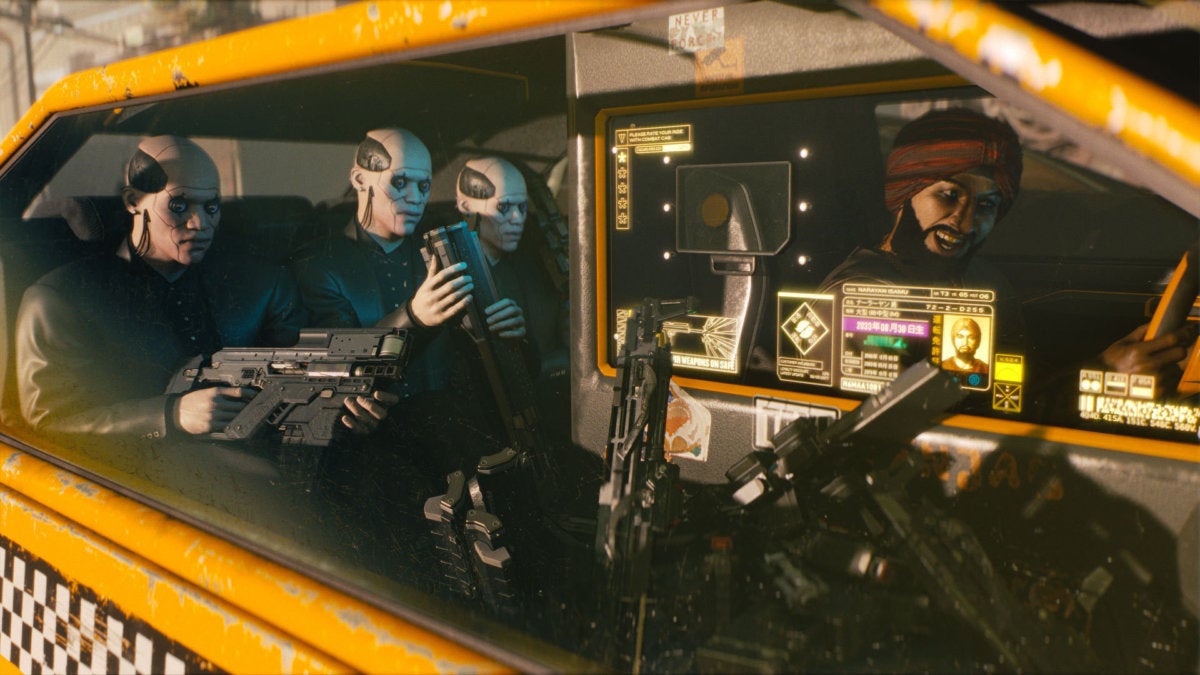 Then we fought Sasquatch, the “boss,” who has a canister of strength-enhancing gas on her back. By damaging it before the fight we gave ourselves an advantage, forcing Sasquatch to drop the massive hammer she was holding. She managed to knock us over though and allowed the enemy netrunner to start hacking us, forcing us to quickly finish the fight or lose control of our body.

And the demo ended in an abandoned movie theater, a Western playing on the screen as we confronted the NetWatch agent. He was able to cut us off from Placide’s network, allowing us to make a choice without his eyes on us—to betray Placide and get paid, or continue the mission and free Placide’s comrade Brigitte. We plugged into the NetWatch agent, letting Placide breach NetWatch’s network (that’s a mouthful) and…then he fried our brain.

Miracle of miracles, we survived and confronted Placide—punched him in the face, rather. We also met Brigitte though, who promised to help us with the secret biochip lodged in our body. A quick ice bath later, and we got our first look at cyberspace, presumably a large part of the full Cyberpunk 2077 campaign.

And on that note, the demo ended.

It looks amazing, same as last year. (We’ve embedded the E3 2018 demo above, since CD Projekt hasn’t made the latest footage available. I’m trying to be skeptical, both of CD Projekt’s commitment to cyberpunk’s themes (and not just aesthetic), and to some of the technical feats we’ve seen both last year and this year. But it just looks damn cool, and April 2020 can’t come soon enough—if only so we can verify what CD Projekt is saying.

Regardless, it made for one hell of a demo—one among many, with Outer Worlds already in the bag and Vampire: The Masquerade – Bloodlines 2 and Dying Light 2 still on our schedule to come. If even half of those are as good as they appear, we’re in for an incredible year. Stay tuned.