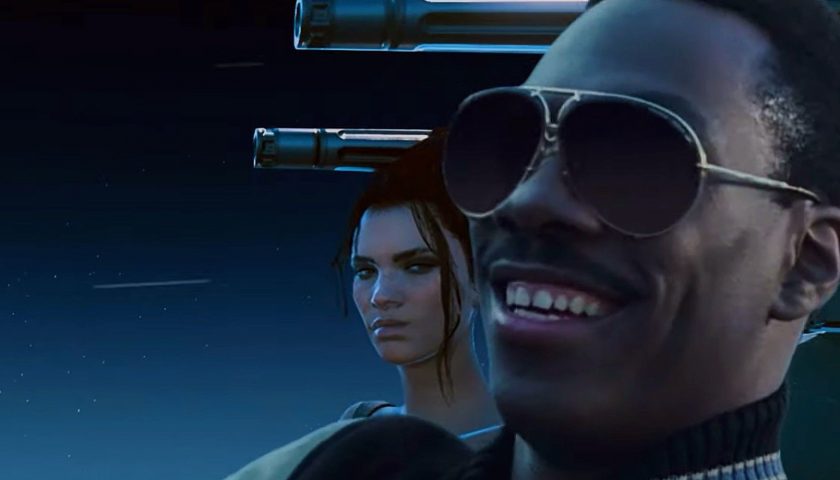 A YouTuber with the mouthful name eli_handle_b.wav just did it again. Thanks to his outstanding editing skills, the creator put Eddie Murphy's detective Axel Foley from the Beverly Hills Cop trilogy into Cyberpunk 2077's gritty world of Night City.

In the video below, Axel Foley gets his new assignment to investigate Saburo Arasaka's murder at the corporation's headquarters that both V and Jackie Welles witnessed for themselves. However, the famous Detroit cop quickly finds himself on a corporate leash he doesn't want to wear, and decides to switch sides.

Featuring shots from all three iconic movies of the 1980s and 1990s, the author seamlessly surrounded Murphy with Cyberpunk 2077 many characters, including Viktor Vektor, Goro Takemura, Placide, Adam Smasher, and Panam Palmer. Seems like our Street Kid Foley has also a taste for some Nomad adventures aboard Militech Basilisk. And before you ask – yes, action scenes and intense shootouts are all there, too. Check it out.

Just prior to this new video, the author has created another Cyberpunk 2077 mash-up video featuring Jim Carrey as Ace Ventura. You can find even more Night City mash-ups on his YouTube channel, for instance, here is the one with RoboCop patrolling the streets. "Somewhere, there is a crime happening." Is there a better quote to describe how things are in this place?

Two years after its initial release, Cyberpunk 2077 is healthier than ever, as the developers revealed that over one million daily players have launched the game for several weeks in a row recently. The studio has always counted on selling its latest RPG for years after launch, and judging from the latest player reviews, CDPR is slowly winning even the most skeptical players out there.

No matter how strong fans' desire for Cyberpunk 2077 content, it might be a while before we get more besides from the already announced Phantom Liberty expansion. According to CD Projekt Red's Japan manager Satoru Honma, we won't be getting a second season of Edgerunners anime anytime soon, as it was always planned as a "standalone work." Hopefully, more Cyberpunk 2077-inspired fan creations are on the way to fill this gap.