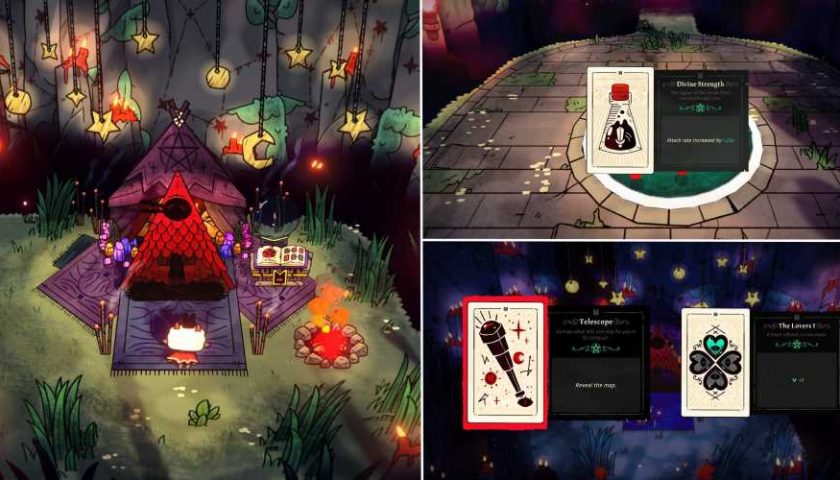 One of the first characters you meet in Cult Of The Lamb is the timeless seer Clauneck. Whenever you encounter Clauneck on crusade, you'll be given a choice of two Tarot cards from among those you've unlocked. Each Tarot card you carry will make you stronger in some way, but your cards only stay with you until the end of the current crusade.

Building up a formidable hand of Tarot cards is one of the surest ways to improve your chances against the Bishops and their minions. If one of these cards appears, especially in foil, be sure to take it! 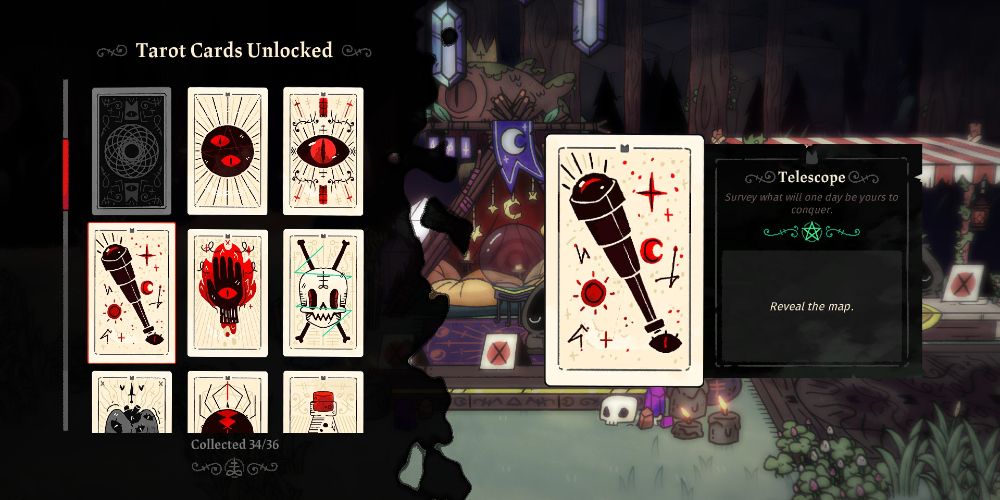 The earlier you can get the Telescope, the more useful it will be. When chosen, it fully reveals the map in every combat node you visit for the duration of the crusade. This includes giving you details on which rooms contain bonuses, notably more Tarot cards!

While you should explore every room anyway even if you don't know what's there, having the Telescope lets you plan your route and make a beeline for upgrades before moving toward a boss's room. 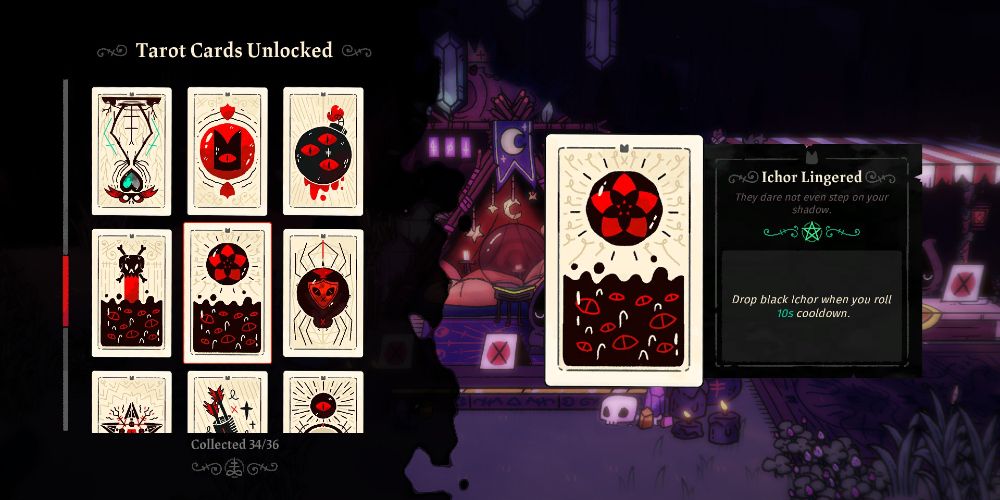 This card doesn't appear until later in the game, but it turns your dodge roll into a potential counterattack. WIth Ichor Lingered equipped, the Lamb will leave behind a small pool of black ichor upon executing a dodge roll. This can happen once every ten seconds, and is a great counter to enemies like bats that charge directly at you.

Black ichor poisons any enemies that touch it, dealing a small amount of damage over time. The Lamb is immune to this effect, so by combining Ichor Lingered with curses like Path Of The Righteous you can cover the floor in ichor and watch your opponents melt away! 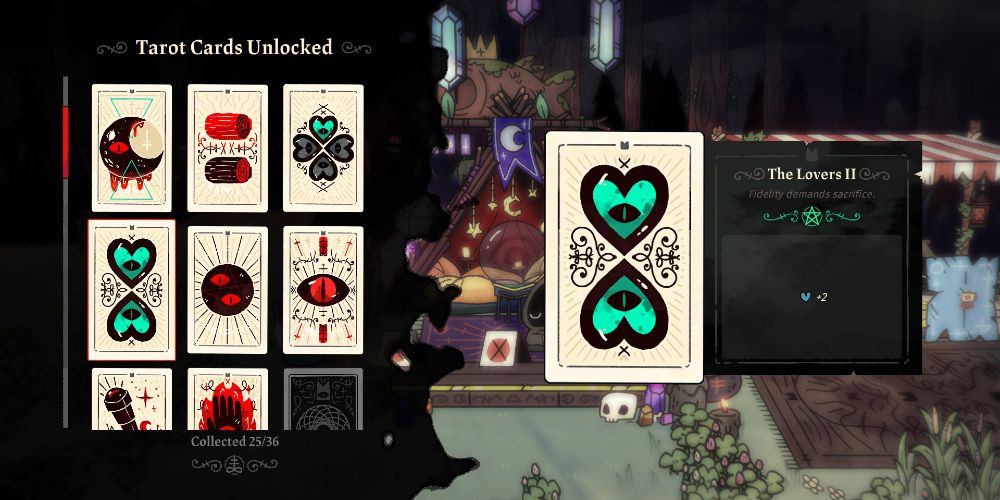 There's no such thing as too much health in Cult Of The Lamb. The Lovers' series of Tarot Cards gives the Lamb additional Blue Hearts, also called Spirit Hearts in the game. Unlike normal Red Hearts, these can't be healed; once they're gone, they're gone for good.

The basic Lovers card is available from the start of the game, but the upgraded version – which provides two Spirit Hearts – can only be unlocked if you choose the Wedding Doctrine. It appears the first time you use the Ritual to marry a Follower, and can be picked up from the Temple floor once the ceremony is concluded. 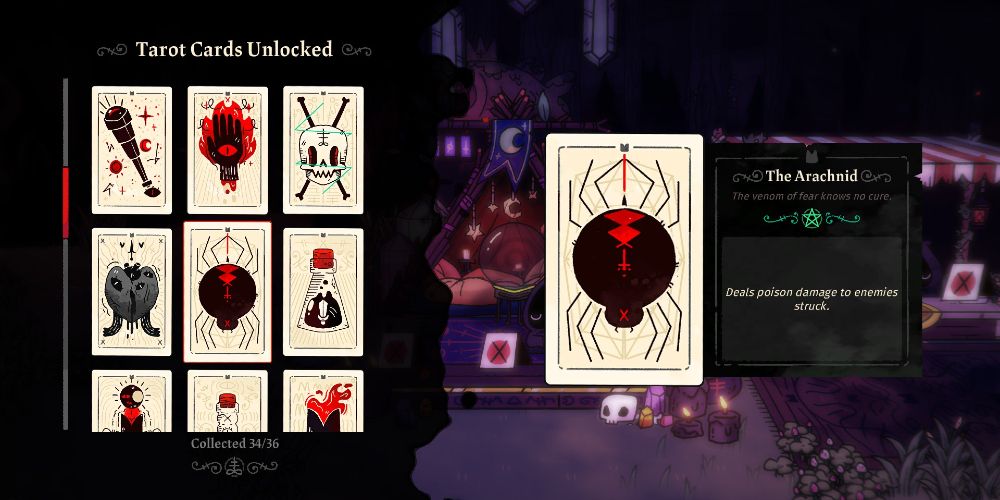 The Arachnid is one of the few Tarot cards that replicates a weapon effect, giving you multiple avenues to achieving your desired build. As long as you have the Arachnid in hand, your weapon attacks will have a chance to poison enemies.

Since the Arachnid's effect is identical to that of Bane weapons, you can take a different weapon variant to double up! Having this card makes the decision of whether to swap weapons much easier, and the ability to poison enemies is always welcome. 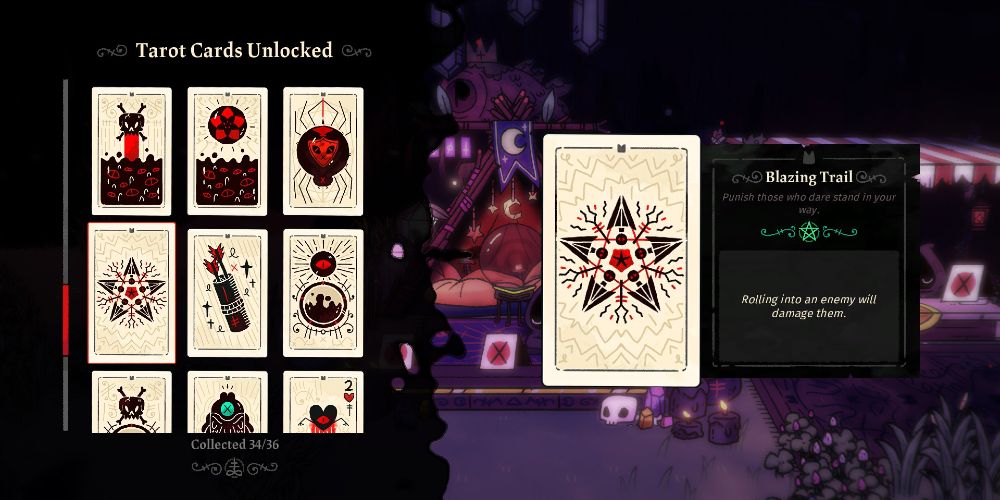 If Ichor Lingered turns your dodge roll into a counterattack, the Blazing Trail makes it an attack in its own right! This card causes the Lamb to deal damage to any enemy they hit while dodge rolling. It might take some getting used to, since with Blazing Trail you'll want to dodge toward enemies rather than away from them.

Whether you're rushing a boss to open a combo with a roll or getting a hit against a secondary target while dodging, Blazing Trail adds utility to your arsenal that you can't find anywhere else. 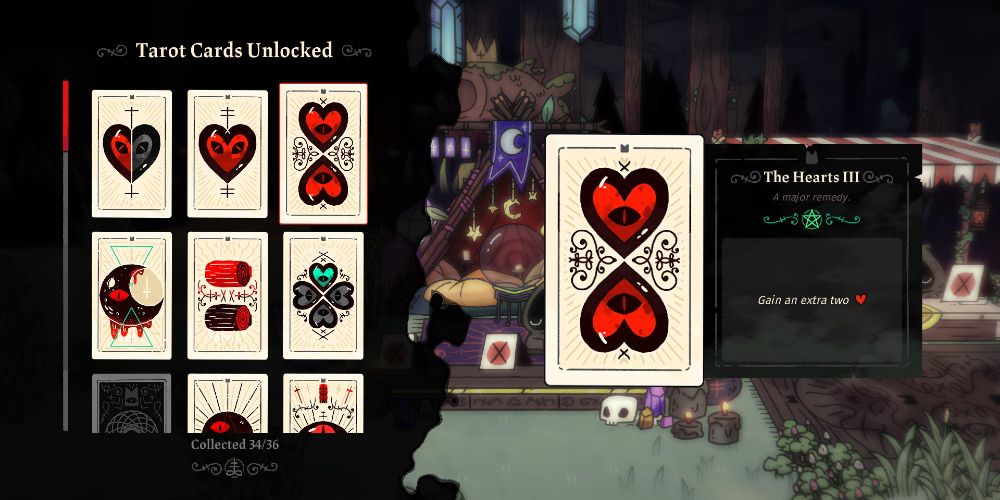 Blue Hearts are good, but Red Hearts are better. Red Hearts can be healed if you're lucky enough to find a health pickup, making them more useful than one-and-done Blue Hearts. Given the choice between an equal number of Red and Blue Hearts, go for the Red ones every time.

The Hearts' series of Tarot cards comes in three varieties, each offering more health than the last. Even the smallest can keep you alive, so don't discount the lower-level versions of the card; after all, as Clauneck constantly reminds you, you cannot argue with the draw. 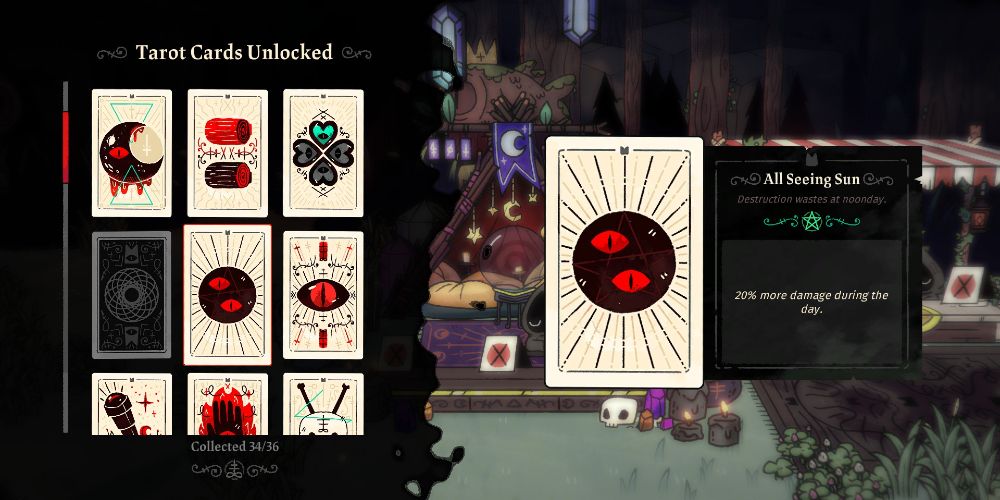 A twenty-percent damage bonus is huge, and as long as it's daytime the All-Seeing Sun confers that much more attack on your weapons. Five-sixths of the game's clock are considered daytime, so there is only a comparatively brief portion of each day when the All-Seeing Sun won't be in effect.

If you get the All-Seeing Sun when you're going after a Bishop, time your entry into their Temple to happen by midday at the latest. That way you'll be able to take full advantage of the card's bonus before sunset, and maybe even be home in time to give a sermon! 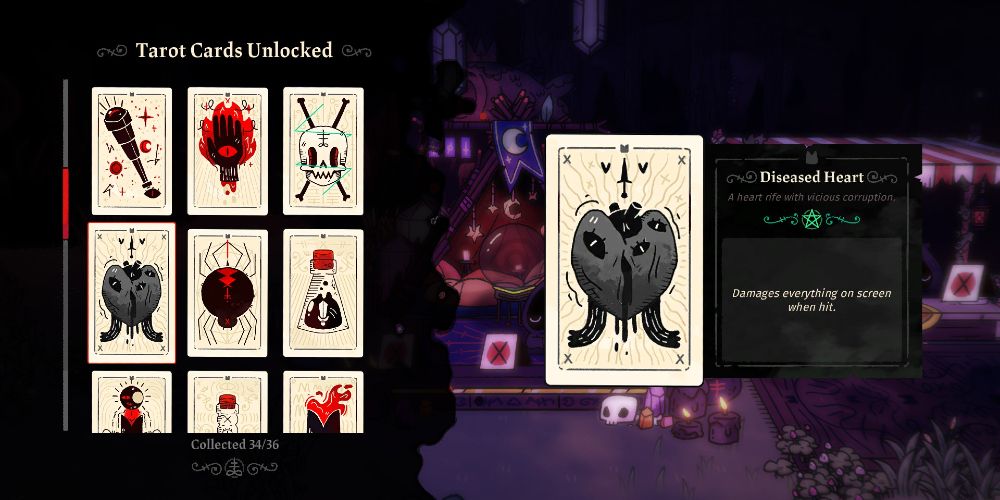 As good as Red Hearts are, there's still one type of health that's better. Diseased Hearts, which are black and covered in eyes, function like Blue Hearts in that they can't be recovered once lost. However, each time damage causes you to lose some or all of a Diseased Heart, every enemy on the screen takes damage.

By choosing the Diseased Heart Tarot card, you not only get more health, but punish enemies who manage to hit you. It's a win-win situation! 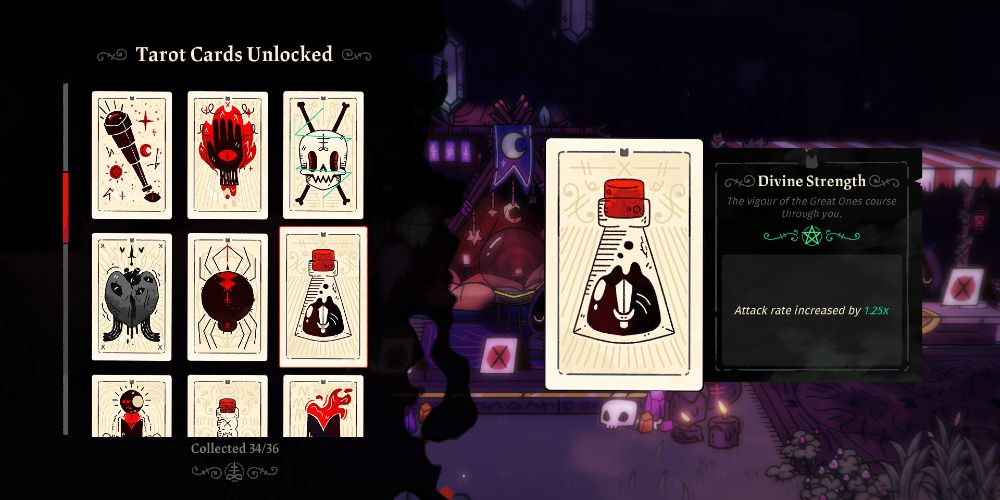 Despite its name, Divine Strength doesn't directly enhance your attack power. Instead, it allows you to attack more quickly with melee weapons, effectively increasing your damage by fitting more strikes into the same amount of time.

Divine Strength is a perfect addition to any build; Swords and Daggers get even more value out of their speed, while Gauntlets, Axes, and even Hammers can bring their prodigious might to bear more often. As far as universal utility goes, it's hard to beat Divine Strength. 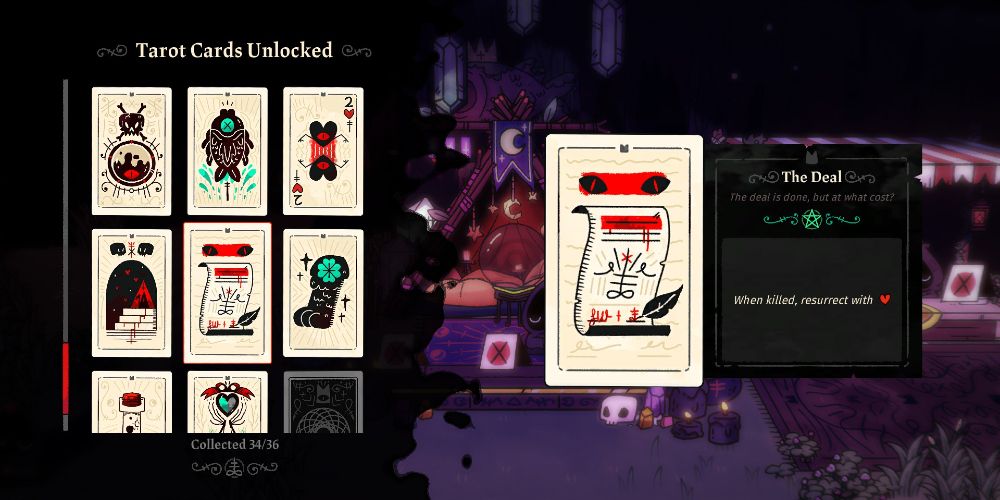 Inevitably, at some point while playing Cult Of The Lamb, you'll come within a hair's breadth of defeating a boss when suddenly the dirge bell sounds. An attack you didn't see got through, and you lost your last heart. Now you have to see to affairs in the village and go through the entire crusade again.

If you have The Deal in hand, you'll resurrect once with a single Red Heart upon dying. You don't even have to sacrifice a Follower or anything – you just get one final shot to finish what you started. Opportunities like this don't come by often in Cult Of The Lamb, so don't waste your extra life!