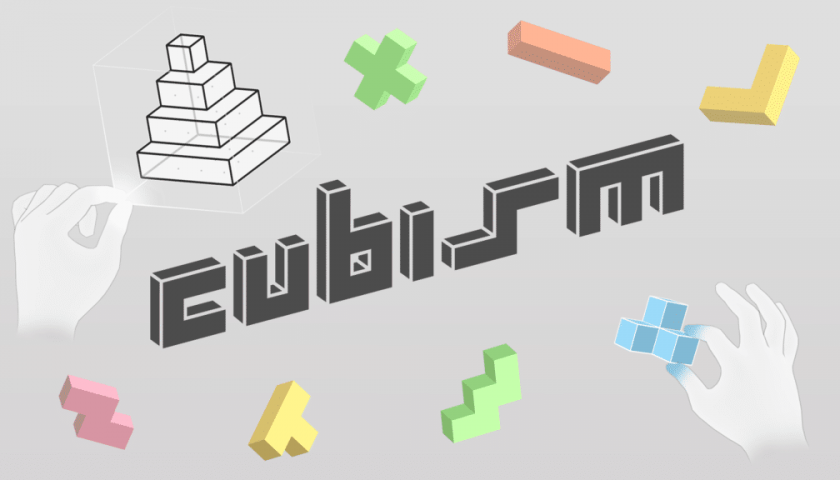 Thomas Van Bouwel is the one-man developer behind Cubism, one the best puzzle games available on the Oculus Quest. Van Bouwel now works full time on Cubism and is developing a set of DLC levels for the game, but five years ago he was working in a completely different industry with no experience in the world of VR.

“My background is actually not in computer science or game development at all. I actually come from a background in architecture,” says Van Bouwel, speaking to me in VR from UploadVR’s virtual studio. “I was a practicing architect for several years, until I made the switch. It was architecture that actually led me to move into VR. I was really fascinated by what VR could do for the design process and how it could make the design and architecture a lot more human-centered. Instead of looking at a plan for a building from top-down, you look at a building from a human perspective while you design it.”

Van Bouwel was always fascinated with the ways that immersive technologies and game engines could be used within an architectural context, and ended up investigating further during his university studies. In his third year, Van Bouwel gave a presentation of a 3D architecture model displayed in the PC game Crysis, imported using CryEngine. He found that from showing his friends and family the model in-game, he received a lot more feedback compared to showing them plans or scale models. “That was when it first clicked. Like, ‘Oh, these sort of immersive technologies can be very useful for the design process.’”

After working as an architect for several years, Van Bouwel decided to quit his job in 2016 and started learning how to develop for VR. He attended hackathons, went to game jams and landed a job at an enterprise VR startup, InsiteVR (now known as Resolve), within a year and a half. While he had a Vive headset at home, the job gave him access to a variety of different headsets, including an early Quest prototype — the Santa Cruz — in 2017.

It was around then that Van Bouwel came up with a new concept for a VR puzzle game. Working in his free time, he soon created the first build of what would become Cubism — an intuitive, deceptively simple puzzle game where the user must place different shaped blocks together to fit into a larger wireframe shape.

“It sort of really came out of that fascination with minimal design in mobile games and what that could mean in VR games,” says Van Bouwel. Minimalist mobile games like Mini Metro, Hitman Go and Lara Croft Go were big inspirations. “These games can use a very simple look and a very simple input scheme, but then can have a lot of depth to them. And more importantly, [they are] games that are really well scoped for small teams.”

“A big part of choosing to work on Cubism was that it felt like it was small enough in scope that I could work on it in my spare time. At the time I was working at that startup, which I really enjoyed working at. So I knew that if I was going to work on a project on the side, it better be something small and something that was manageable.”

Cubism’s puzzles are a riff on the classic wooden block puzzles that have been around for many years. In real life, the end shape is usually restricted to something quite memorable and solid — a rectangle or a cube. With Cubism, the shapes of the pieces and the wireframes vary wildly in both difficulty and design, no longer held back by gravity pulling at physical blocks.

The real beauty of Cubism is in its simplistic, clean design — the architectural influence is very clear. The entire game can be played with just the controllers and the triggers. If you’re using an Oculus Quest, you don’t even need controllers — you can just use your hands. This game-wide policy of simplicity and accessibility means that almost anyone, even those inexperienced with VR, can pick up the game and play it. “I put a lot of effort into that actually. The game came from being in a stage where it was a lot harder to use and learn.”

Earlier versions of Cubism mapped several actions to different controller buttons. This wasn’t initially a problem, as only experienced gamers and other VR developers were doing the playtesting. “I was missing a lot of UX issues early on, because if people are comfortable with VR or they’re comfortable with playing games in general, they learn these controller mappings pretty quickly. But if people aren’t, it’s really a roadblock for them.”

The UX issues became more apparent when Van Bouwel took his builds on the road to a wider audience. “Putting those people in the game and seeing them sort of struggle with the control scheme, that really sort of flipped the switch for me. Like, I really need to simplify this.”

“From that point on, I did everything I could to make the whole game playable with just the triggers, which required a few redesigns.” Small changes — allowing the triggers to be used for all actions, placing a menu indicator beneath the puzzle — made the game much more accessible to the uninitiated. “From the start of the game to solving the first puzzle, that became a really fast process. People could get started with their first puzzle within like 10 or 15 seconds of starting the game.”

“That was always a goal of mine — to make sure that it was something that was approachable,” he says. “I think that’s part of the appeal of VR too, right? That it should be more intuitive.”

Cubism released last year, and while the game is available on both PC VR and Quest, it shines on the latter. Not only is it among the best puzzle games for the system, but since launch Van Bouwel has also added hand tracking and 120Hz support, which both elevate the game to an impressive new level. It’s also one of the best showcases of the Quest’s cutting-edge VR technology and features.

Now, approaching a year since release, Van Bouwel is designing and playtesting a set of 30 new DLC levels for the game.

“DLC seemed to be like the best way to give people more puzzles to play,” he says. “It’s still a work in progress, but hopefully [the DLC levels] are going to have a bit of a different look from the main campaign to differentiate them. But they will play very similar to the puzzles in the main campaign.”

“And much like the campaign, there’s going to be a song that’s sort of tied to the puzzles, specific to the DLC.”

Sound is another big part of Cubism’s design. In the main campaign, each different puzzle piece has an associated piano note. When you solve a puzzle, each of the notes will play together to form a chord. If you combine all the chords from each level together, it forms a song. “The main campaign is basically this big song that you unlock as you play it. And the DLC will have a song of its own that you unlock as you play the puzzles as well.”

But how does Van Bouwel approach designing a Cubism level, both in terms of its form factor and its difficulty?

“Usually, it starts with a shape,” he says. “Then I start filling it in with pieces.”

“I try to make the puzzles in such a way that you can approach them with some reason, so that you don’t just have to trial and error your way through it. There are like certain tricks that I know I can design for — maybe there’s one or two pieces that can only go in several spots of the puzzle, so it gives a starting point.”

Likewise, on the other end of the scale, certain elements will bring complexity. “If there’s a limited number of symmetries in the puzzle shape or in the piece shape, then it becomes a lot harder to sort of do these mental rotations when you’re placing the pieces into the puzzle.” Despite this, playtesting puzzles is essential, which is why Van Bouwel has been running a series of weekly playtests with Cubism fans over the last six weeks as he works on the new levels.

Beyond the DLC, a local editor might be on the cards eventually, allowing players to create their own levels and share them online via sideloading, similar in process to installing custom Beat Saber levels. In terms of adding multiplayer modes or leaderboards, Van Bouwel isn’t too bullish. “It’s something that I’ve sort of consciously shied away from in this game. Part of the design of the game is to be a relaxing game and a relaxing experience. I wouldn’t want any of the mechanics to pressure you into needing to find a solution.”

When it comes to future projects beyond Cubism, Van Bouwel has nothing official to announce just yet. “It’s a bit early,” he says. “I do have some ideas of next projects that I would want to work on, but [they are] ideas without any execution… I’m looking forward to [when] I have time to prototype these new ideas. Hopefully then I have something that I’ll be happy to share.”

Cubism is available on Oculus Quest and PC VR now, with extra DLC currently in development.