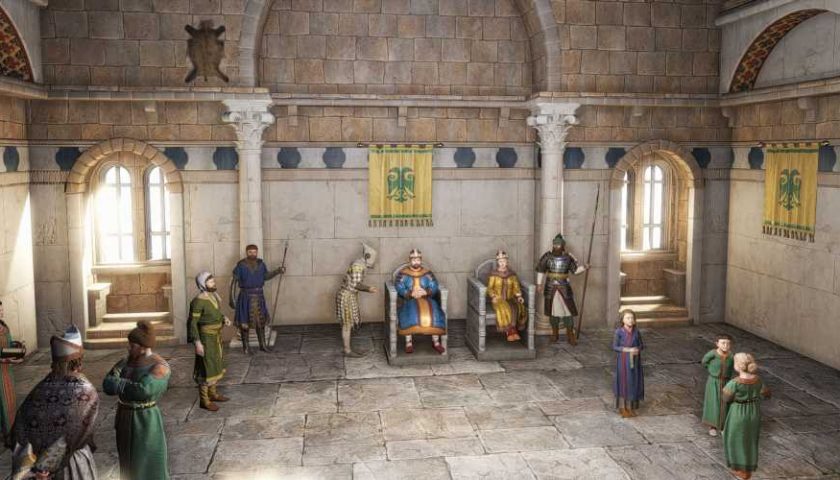 Crusader Kings 3, the acclaimed grand-strategy title from Paradox Interactive originally released in 2020, had its second major DLC release on February 8, 2022: the Royal Court expansion. It is a hefty beast – introducing a substantial amount of new gameplay mechanics and core features to the game.

With such an extensive list of new features, and with some of them available for free and some only available in the paid DLC, it can be confusing to know where to start. So here is a breakdown of the most important things for you to know before diving in. 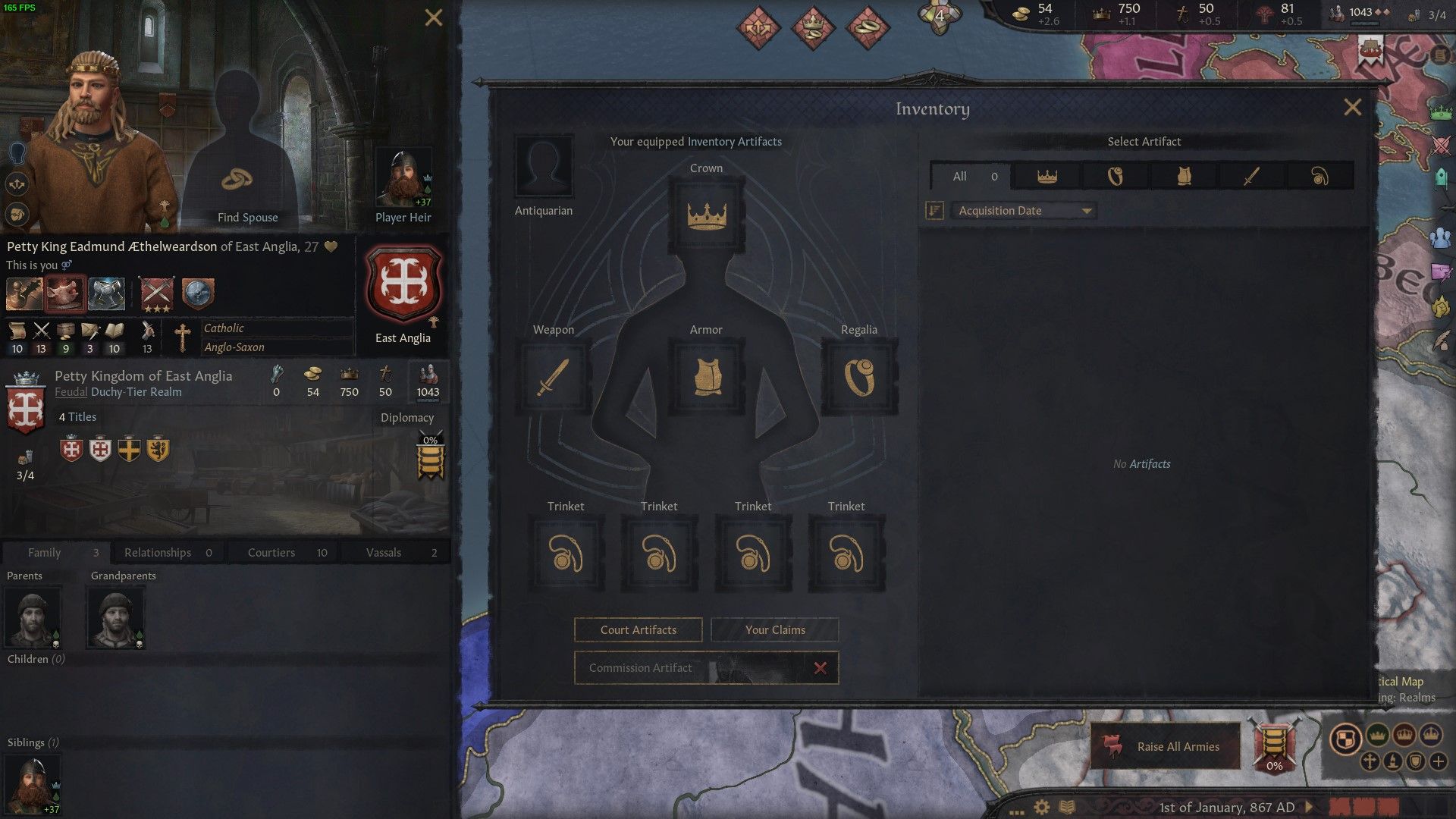 When releasing major paid-for DLC, Paradox also provides a significant amount of free content with it in the form of a game update. The Royal Court expansion is no exception. With the update (called 1.5.0 “Fleur-de-Lis”), the following Royal Court features are included for free:

The free update doesn’t include the new 3D Royal Court (and its associated mechanics such as grandeur and amenities), the new hybrid culture system, the petition liege feature, the new portrait assets, and the inspiration features. For these, you will need to pay for the Royal Court DLC (or have the expansion pass).

For further detail on what is included in the free update, you can watch this video from Paradox and read the update changelog.

Disable Any Mods, For Now, To Avoid Glitches And Crashes 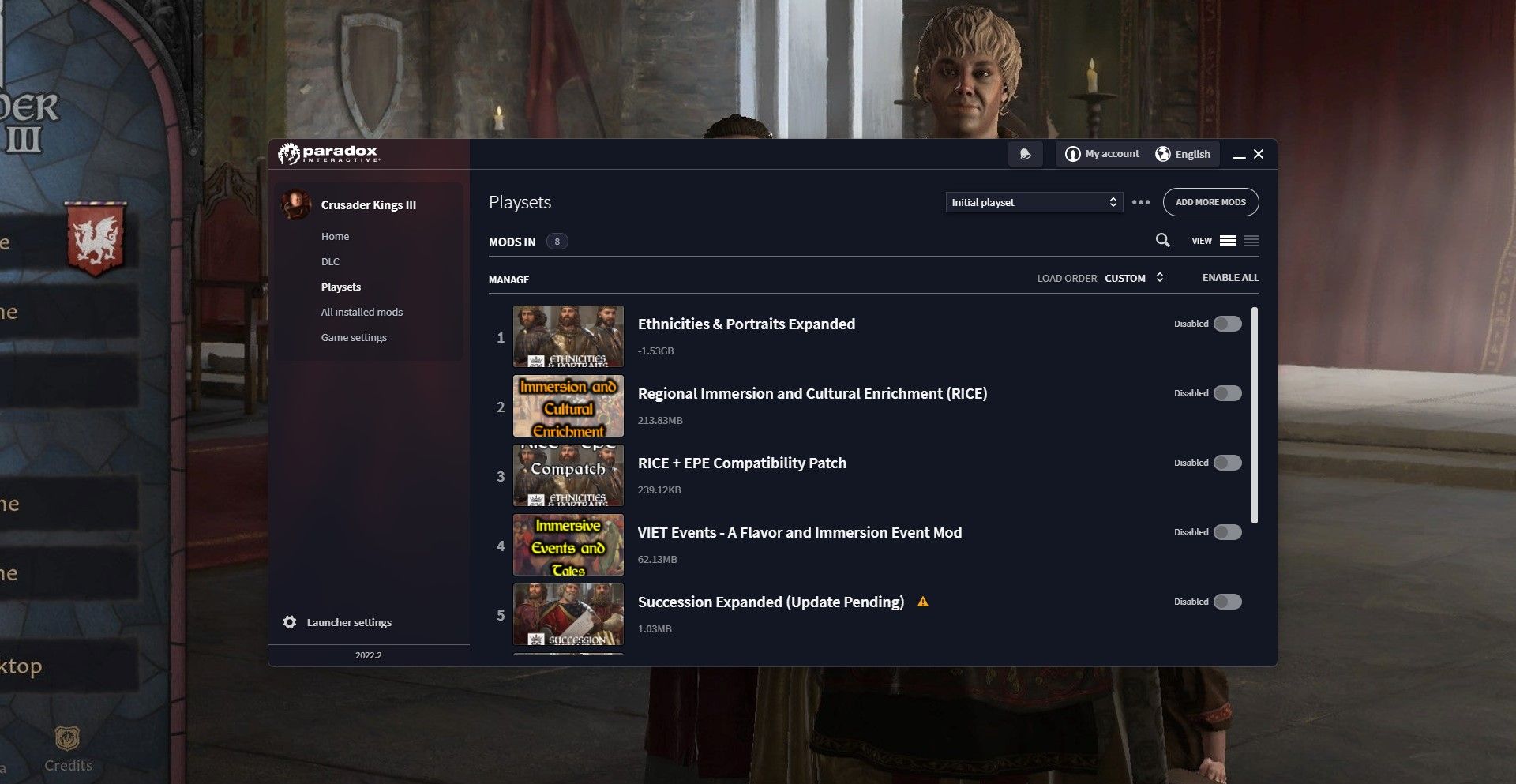 Royal Court is a major update to Crusader Kings 3, and significantly changes many core gameplay and graphical features. As a result, it is advisable to disable any mods you have installed (even ones that are Ironman Compatible), via the Paradox Launcher, so that there aren’t any compatibility issues that can cause bugs or the game to crash completely.

You can save multiple mod set-ups as playsets. Do this before turning your mods off, so that you can go back to your old playset once they have updated for Royal Court.

Once the Royal Court update has bedded in for a while and the community gets used to it, you eventually should receive updates to your favourite mods – potentially with changelogs detailing their compatibility with Royal Court. Crusader Kings 3‘s modding community is extremely active, so this shouldn’t take too much time. Keep an eye on the Paradox forums, for further information on Royal Court modding.

Not Everyone Can Hold Court 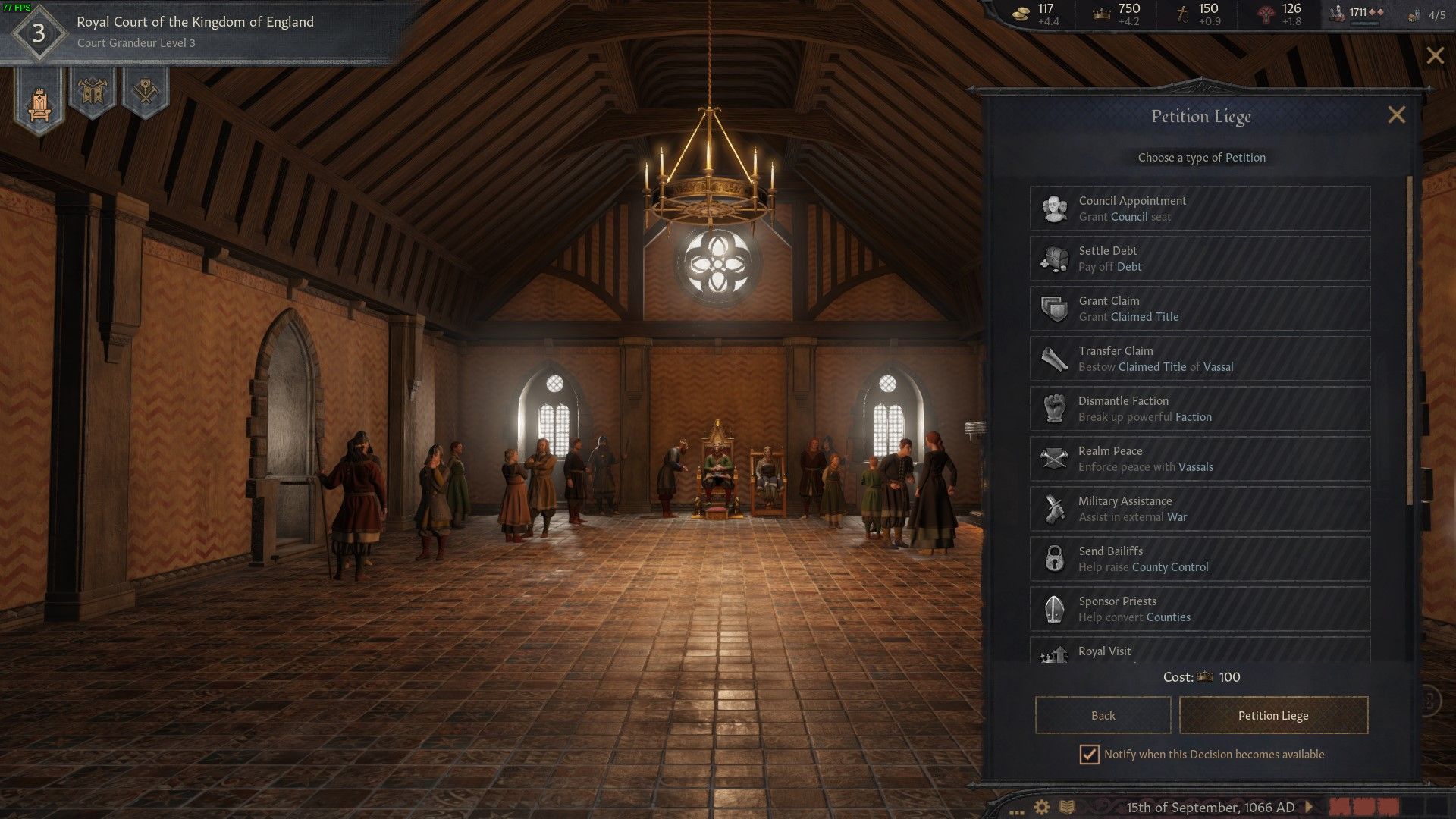 With the Royal Court paid-for DLC, you can only access the 3D Court feature if you are a ruler of the Feudal or Clan government type and are at the rank of a king or emperor.

If you are a count or a duke, then you will need to become a king to be able to hold court or display artifacts. Don’t worry if though, there are still plenty of new features for dukes and counts. If you have a liege who is a king or an emperor, this includes the new Petition Liege option, available in the Decisions menu. This new feature allows you to ask your king for certain favours – giving a new dimension to playing as a vassal where your liege can help you.

For example, an especially useful petition option is to ask your liege to break up a powerful faction if you are on the brink of a civil war. This will cost prestige and, if your liege doesn’t like you very much, your request could be refused – but it is a better option at trying to stop a revolt than the old method of trying to curry favour with the plotters and hoping for the best.

If you don’t fancy working your way up the ruler rankings, you can simply select a King or Emperor from the character selection map to be able to hold court from the start.

Some title names can be confusing. A ‘Petty King’ for example, is actually a duke. To find out if a realm is a county, dukedom, kingdom, or empire on the character selection screen, you can hover over the realm’s coat of arms to see its actual rank. 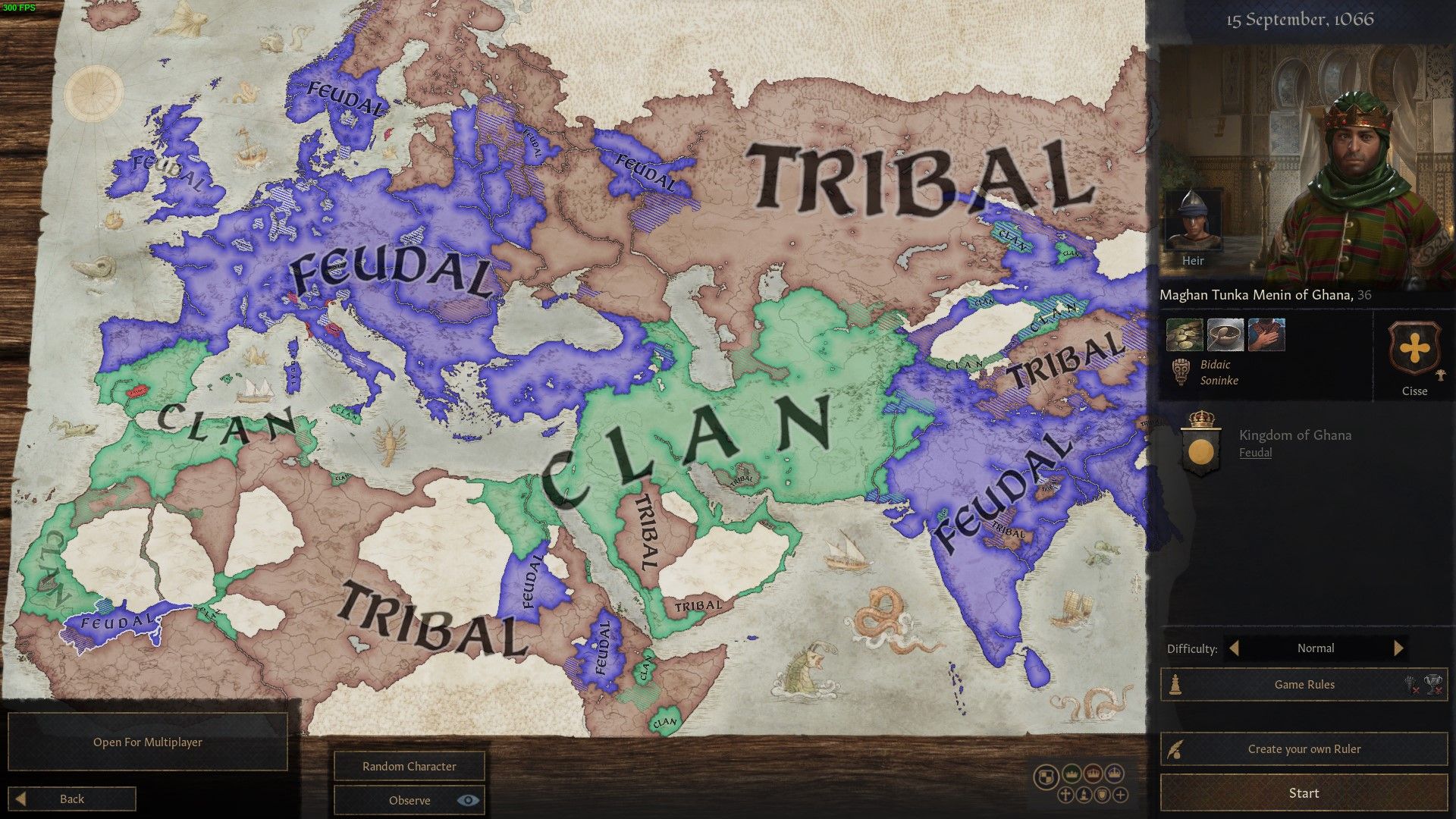 Additionally, if you don't want to wait to embrace feudalism, you can start simply start as a Feudal or Clan ruler. On the character choice screen, click the plus sign in the bottom right corner of the map and then select Government. You will then be able to see the realms which fall under tribal governments (the ones that do not have royal courts).

Note that Norse realms are tribal and do not yet have access to the 3D Court feature from the start, so you can’t yet hold court as a Viking until you embrace feudalism.

There Are New Royal Court Achievements 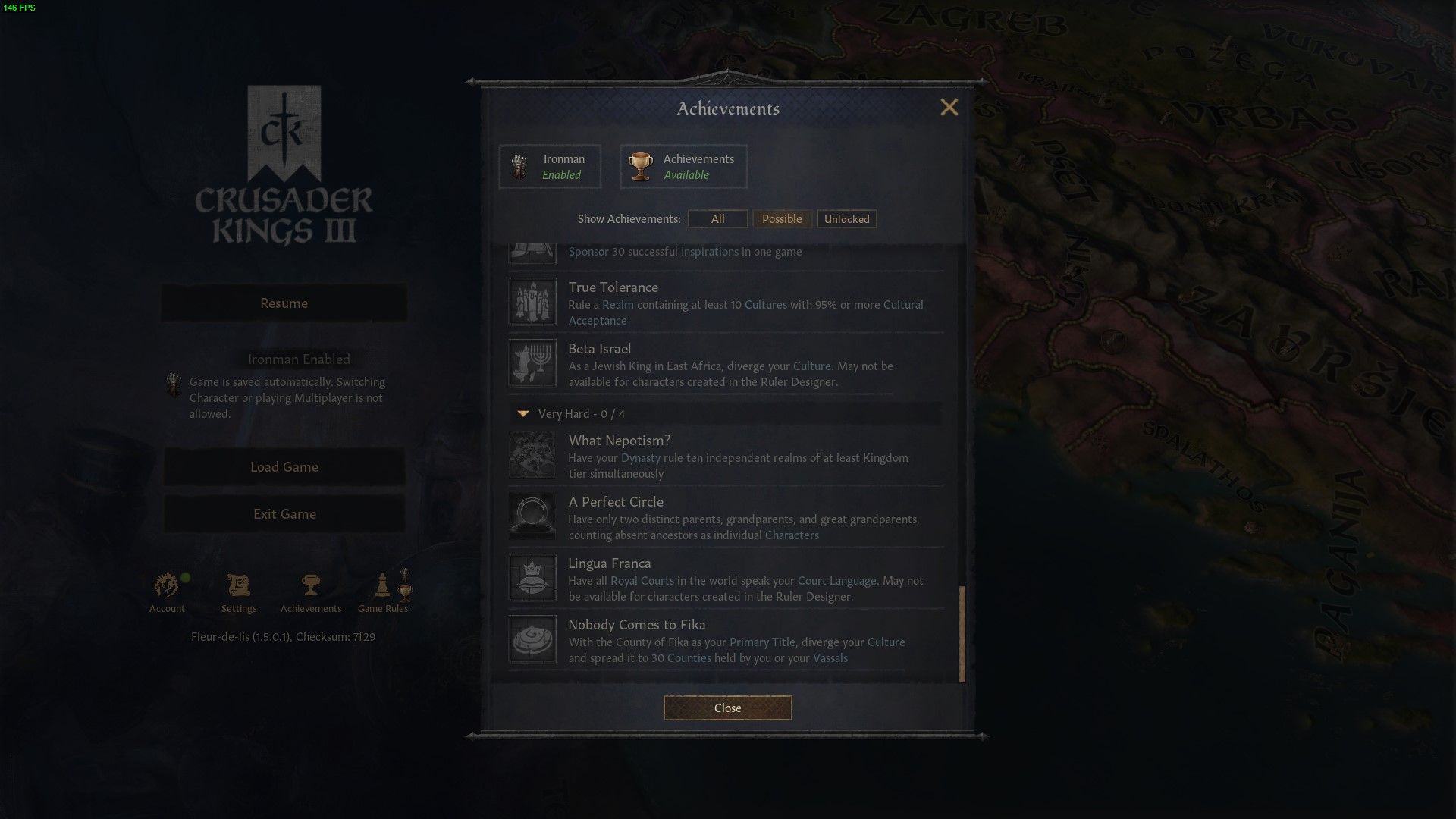 As an open-ended game with no real defined goals, Crusader Kings 3’s achievements are somewhat more important than those of other games as players often use them to be that end goal. The games’ achievement system is inbuilt, in that you can access information about achievements by clicking on the Achievements button on the pause menu, and if you achieve one, then you’ll see a popup in the top-left of the screen. If you are playing on Steam, then they are also replicated as Steam Achievements.

If you are stuck with ideas about how you want your new game to pan out, Royal Court brings a whole host of new achievements that can provide more potential endgame goals.

If you are aiming for achievements then you must be playing in Ironman, with no mods installed (with some extremely limited exceptions), and with all the Game Rules compatible with achievements as indicated by the rules screen. Any custom character must also have fewer than 400 customisation points.

The new achievements, as per the game's descriptions, are: 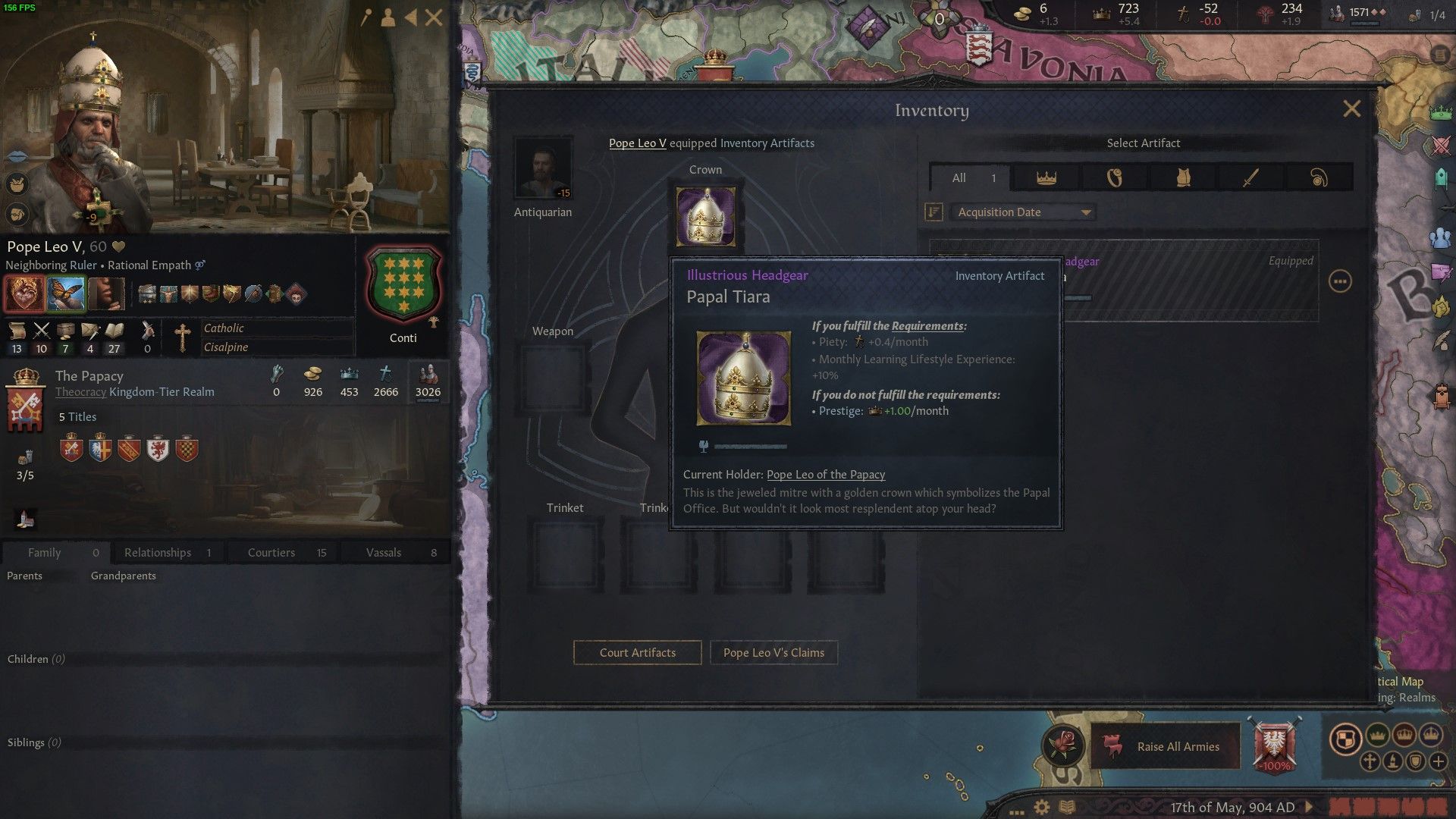 Fancy wearing the Pope’s Hat? Well, now you can!

There’s a new artifact system in Royal Court, which ascribes certain bonuses to many different legendary objects. These objects might be inherited by you, gifted to you, or commissioned by you for an artisan to make. Some objects you display in your court, as part of the Court Artifacts, and some you wear as part of your Inventory.

Not only that, but you can ‘acquire’ (i.e., steal) other characters’ objects by winning wars over them – and that includes the Papal Tiara.

The easiest way to take the Pope’s hat is to start as Count Haesteinn in 867, and immediately call a Varangian Adventure against the Papacy for the Prince-Bishopric of Roma. Even if the Pope calls in allies from Christendom, you should win the war easily – allowing you to snatch his Tiara and earn the huge Prestige bonus (+1.0 prestige/month in fact) from it.

Starting In 1066 Is Slightly Easier 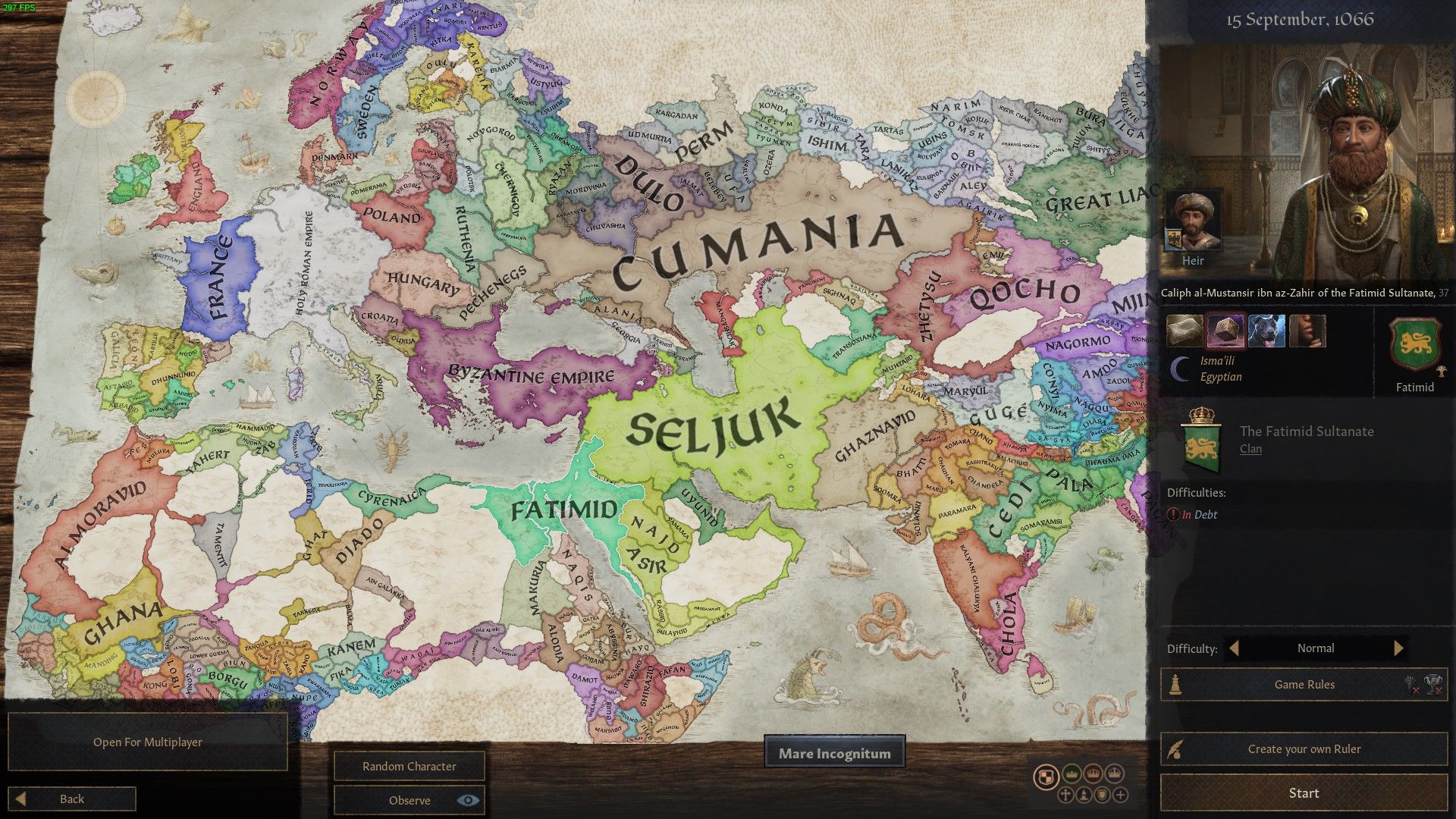 With the new expansion, Crusader Kings 3 still has the same two historical starting dates: 867AD and 1066AD. If you want to explore the updated content in Royal Court at your own pace and play the game like an RPG (known in Crusader Kings terminology as ‘playing tall’), then it is advisable to start your game in 1066.

There are two reasons for this. Firstly, there are more Feudal states across the map than in 867, meaning you have more choice as to where to play and, secondly, the world is a bit more stable as there’s no collapsing Carolingian Kingdoms or raiding Vikings lurking around the corner to ruin a sedate RPG experience. 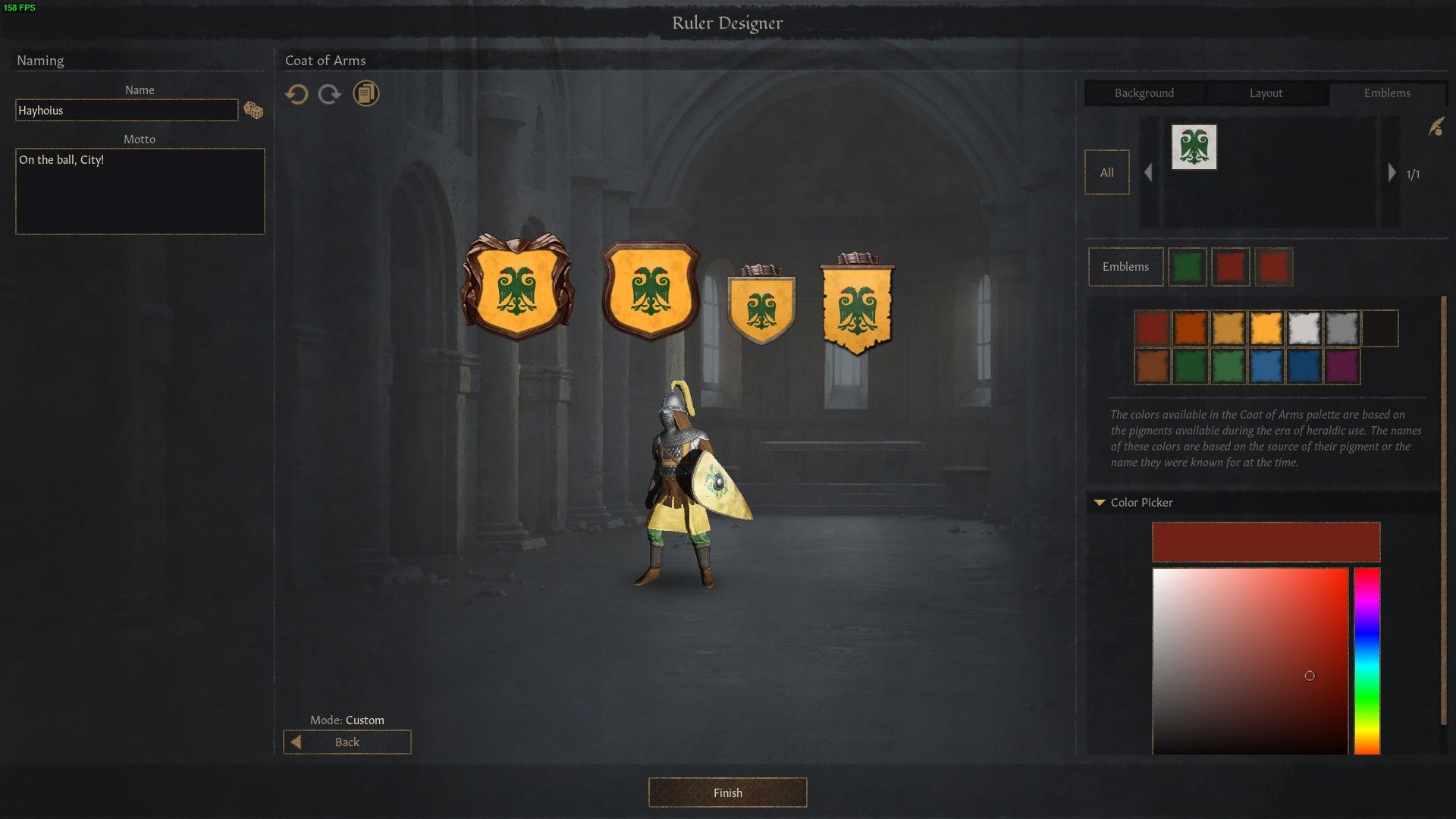 Rejoice! There’s now a Coat of Arms designer in the game; allowing you to design different versions of your family’s Coat Of Arms until your heart’s content. Not only do the new designs appear wherever your 2D coat of arms is shown, but they can also be seen on the shields of your men-at-arms and on court artifact banners.

You can find the Coat of Arms Designer if you go to your House’s Menu and click the quill icon next to the house name (it’s a bit tucked away and can easily be missed). While there, you can also change your house’s name and its motto. 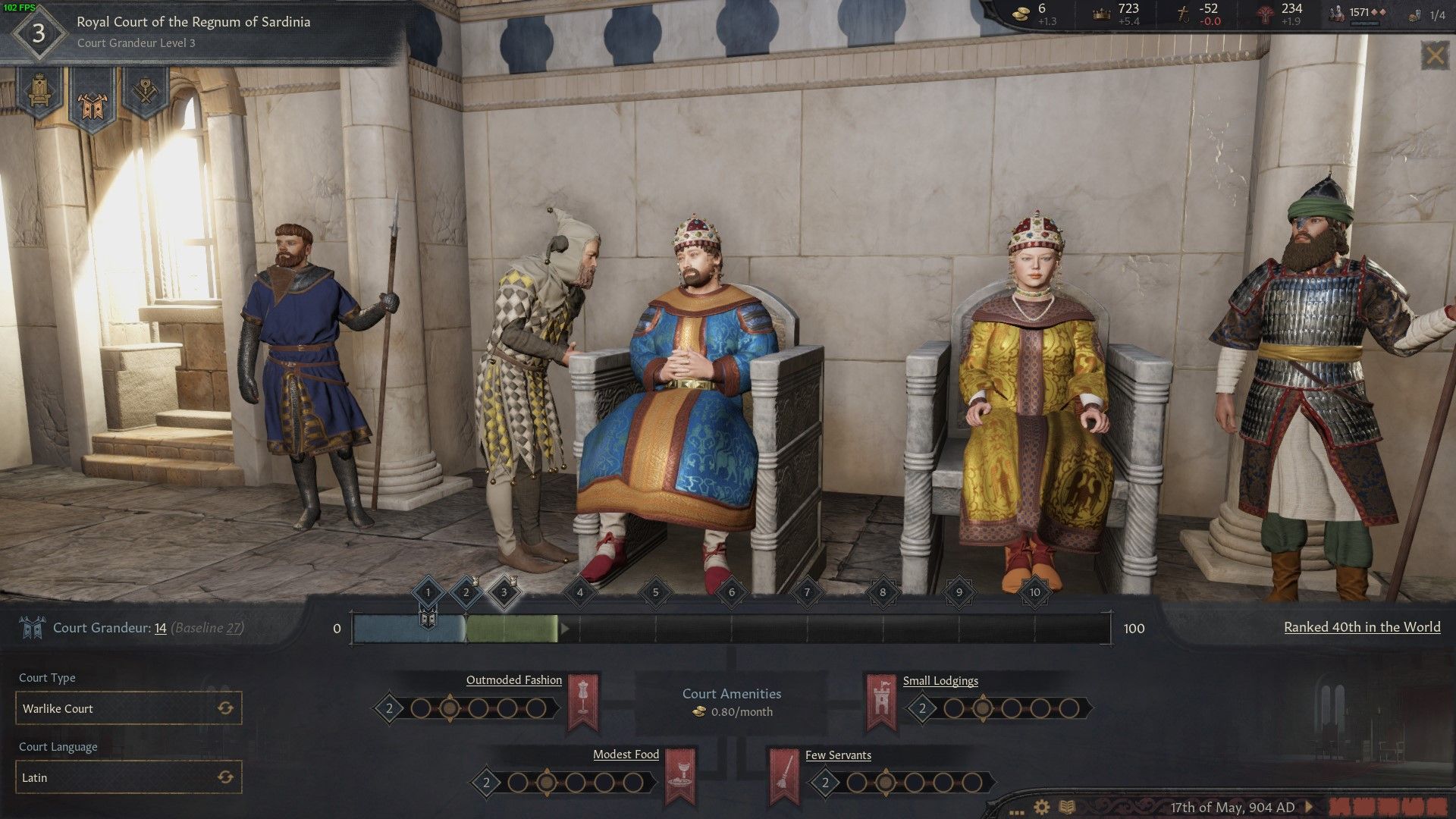 Grandeur is a new mechanic within Crusader Kings Royal Court, which is a levelled representation of how well-regarded your court is to the wider game world.

On the Grandeur Menu within the 3D Royal Court, you will see a meter that shows your current Grandeur Level. Higher levels will bring all sorts of special bonuses that you can see if you hover your mouse over each level. You will also see a Grandeur Expectation icon (the two trumpets), which is the level of grandeur your court is expected to be at based on your realm size, traditions, and other variables.

While your grandeur level will naturally go up and down depending on the decisions you make at court over time, there are a number of choices that can be made to directly affect the level. These are:

Generally speaking, you should try and stay a few levels above the expected grandeur level to benefit from the bonuses it brings. But be warned: unusually for a Paradox grand strategy game, none of these options are locked or need additional requirements. As a result, it is tempting to go all-in with the best clothes, food, and lodgings possible right from the start. Remember, though, that you will pay a higher amount of monthly gold (as indicated by the Court Amenities cost in the middle of the screen) for higher quality amenities, and your choices are locked for 12 months.

You will need to be careful that you are not at risk of bankrupting yourself by having an over extravagant court (i.e., if you quite literally have delusions of grandeur). Even if the costs might look okay for now (as seen when you hover over your Total Income), having to deal with an unexpected war or threatening rebel faction could suddenly see you spiralling into debt – and debt is poison for a flourishing realm.