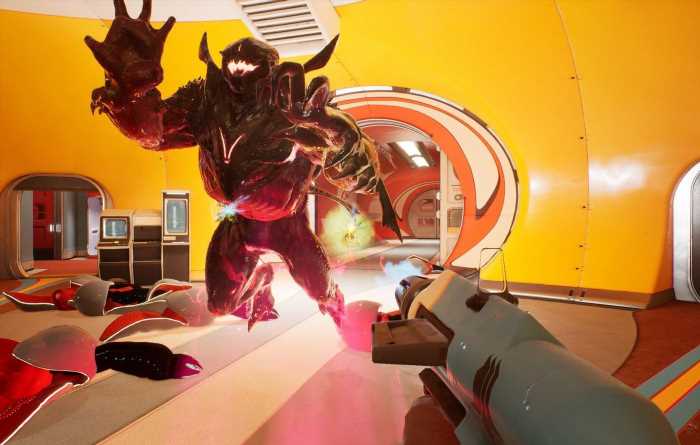 The sixties themed cooperative shooter The Anacrusis will be released into Early Access later this week on January 13, 2022. The full version is currently planned to launch at some point towards the end of this year.

The Anacrusis draws most of its inspiration from games like Left 4 Dead and its equally famous sequel Left 4 Dead 2. The writer behind these classic titles, Chet Faliszek, actually left the developer, Valve, to start his own studio in 2017. He founded Stray Bombay a couple of years later in 2019 to work on The Anacrusis.

The game takes place on a starship stranded at the edge of known space in a distant future where “mighty corporations have carried humanity to the fringes of the galaxy. After expanding unfettered across tens of thousands of systems — all devoid of intelligent life — humanity has grown complacent, until disaster strikes.” The Anacrusis follows “four unlikely survivors — Nessa, Guion, Liu, and Lance — who are unwilling combatants in the battle to defend humanity from the alien menace.”

The Anacrusis is a cooperative shooter designed for up to four players. “You and three friends must battle through waves of alien enemies to escape to the next adventure. Unlike other games of the same genre, challenges are determined by the game’s Director2.0 which places enemies, gear, power ups, and challenges based on how you’ve played in the past.” Players unlock a whole panoply of weapons and perks along the way.

The game features a procedural mechanic, so you “never fight the same battle twice.” This involves an artificial intelligence which “controls every aspect of the game. It spawns every enemy, directs each boss, and places every weapon, gadget, and health kit.”

While the game is currently in Early Access, you can jump right into The Anacrusis. “The first three episodes are feature complete, the game is playable, and works with Steam players as well as uses crossplay to allow players to connect with players on the other supported platforms." The game is available on PC as well as Xbox Series S and X. There will be more episodes when the full version comes out and subsequent seasons are planned for the future.

“We've built what we feel is a strong core for The Anacrusis. The first three episodes, which we're launching with in January, represent our vision for the game. But we also know that our best plans will change the moment players start playing the game. That's why we want to get the game out now, so we can start collecting feedback from the community and use that to shape the future of the game.”

The Anacrusis will be of interest to anyone who enjoyed Left 4 Dead and Left 4 Dead 2. Since the cooperative shooter has been left by the wayside in recent years, the game holds a lot of promise when it comes to reviving the largely forgotten genre.