Between waypoints, portals, world maps, and even the start menu, fast travel mechanics have been implemented into almost every video game that releases nowadays. But in World of Warcraft: Classic, your options for fast travel are severely limited. Assuming you’re not a filthy AoE gold farming mage, of course. In Classic, players have to travel across the open world on their trusty steed. And despite every mount performing exactly the same as far as function is concerned, there are more than a few differences in their appearance.

Obtaining a rare mount with a unique appearance is a cosmetic achievement that garners a considerable amount of respect from fellow players, whether they be guildies or strangers. And so, with the honorable goal of impressing our friends in mind, let’s take a look at the rarest mounts in the game. 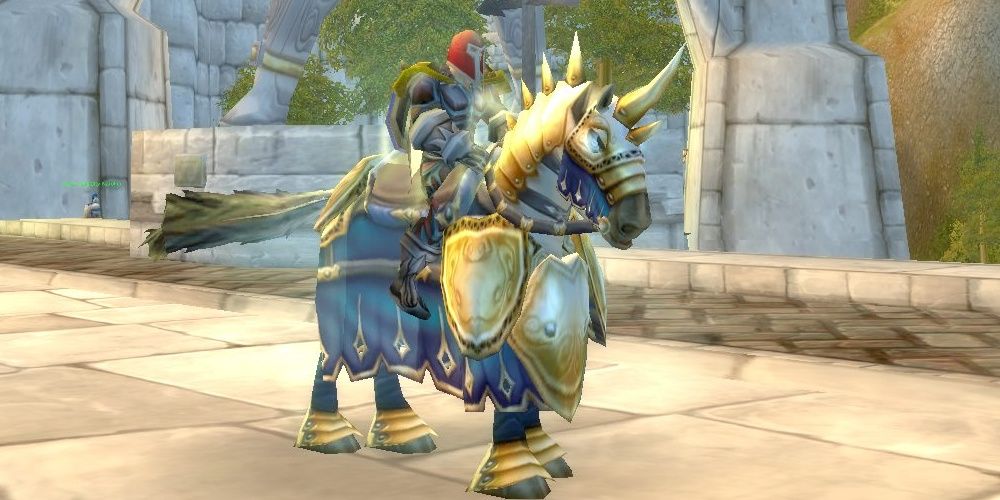 Though these mounts may be unobtainable by players that are not warlocks or paladins, they are still among the rarest options in the game. The Dreadsteed and Charger mounts are each respective rewards from warlock and paladin specific class quests.

One of the most unique things about them is the animation that appears upon summoning them. When calling upon the Dreadsteed, the ground beneath its hooves cracks into fire ridden sections. And as for the Charger, the mount and its rider are surrounded in a golden light at all times. 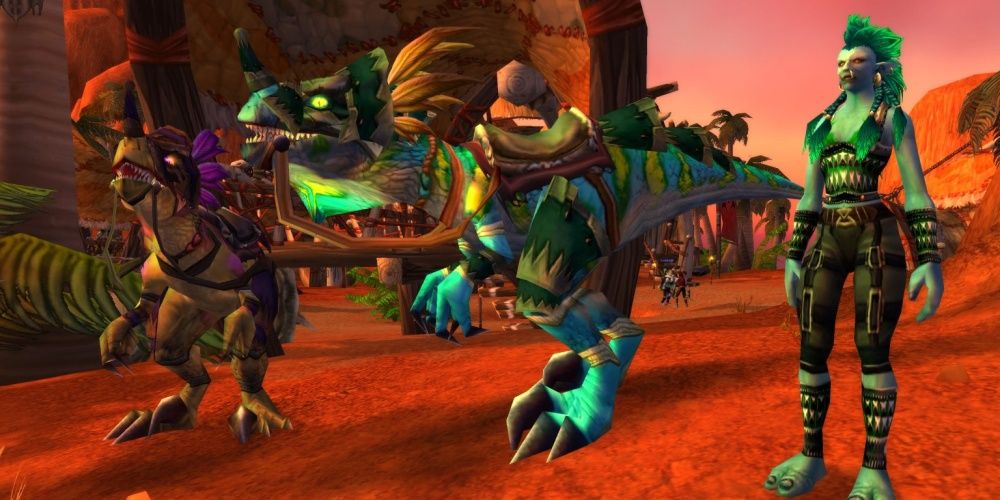 The wording here translates to mounts that are not automatically available to your character due to your race choice. For example, if you played a troll these mounts would include the Wolves, Kodos, and Skeletal Horses. In case you were unaware, it is possible to buy other mounts available from your faction’s races. 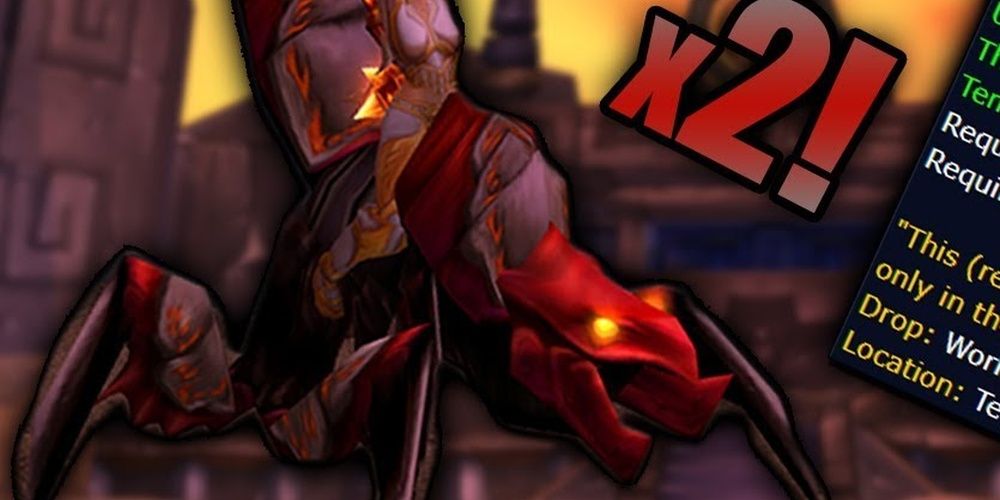 This is a silithid mount that becomes available once the Temple of Ahn’Qiraj drops in Phase 5. Unfortunately, it and its blue, green, and yellow variants are only rideable within the Temple of Ahn’Qiraj raid. Unlike the blue, green, and yellow variants, the red silithid mount has a much lower drop rate. Which is why it has made this list.

While you may not be able to show off this hard to obtain mount in the open world, it’s still something other players will see during your weekly raids. It’s really a shame that these mounts are only rideable within the instance because I have yet to see other creatures like them in any other game, making them a calling card for World of Warcraft. 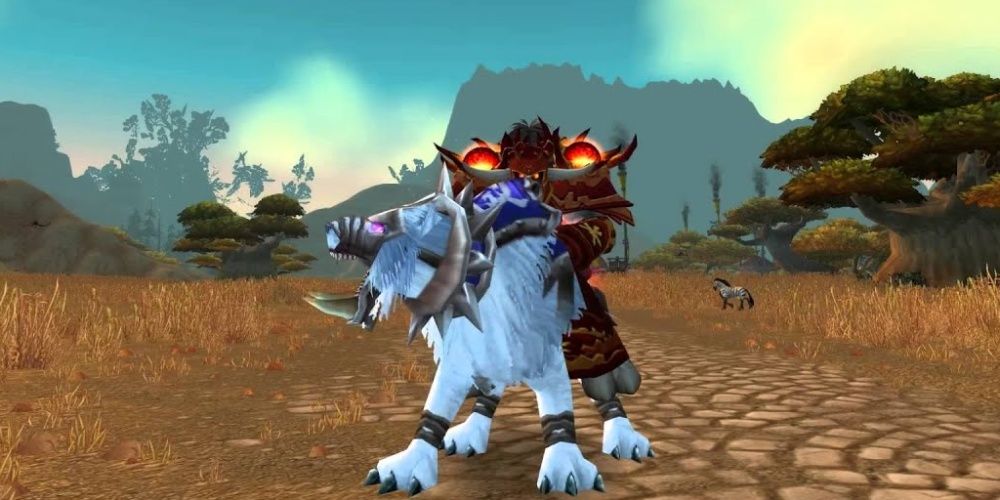 Each of these mounts is obtained by earning an exalted reputation with your faction’s Alterac Valley representative. The Frostwolf Clan if you’re Horde, and the Stormpike Guard if you’re Alliance. They each have pretty slick models as well as glowing purple eyes which make them pretty tantalizing choices.

However, even with PvP rank 3 discounts and your exalted reputation, the mounts cost a minimum of 640 gold. But since when has being stylish been cheap? Besides, it pays to look good. 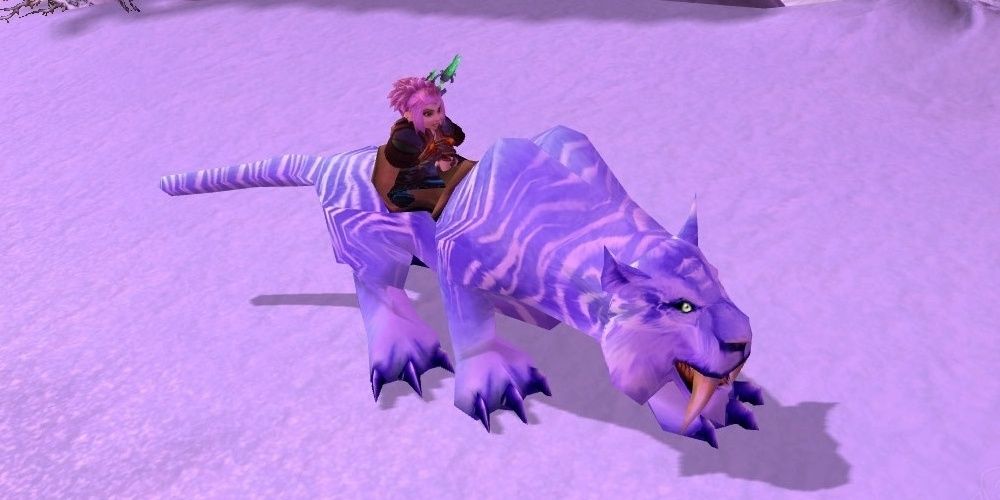 This frostsaber is one of the most noticeable mounts available, but it can only be acquired by Alliance players. And the process of achieving it is as monotonous as the mount is beautiful. Unlike its many expansions, World of Warcraft: Classic is bereft of dailies. That is unless you want this mount. In order to attain it, you will have to perform a series of three quests over, and over, and over again until finally achieving exalted status with the Winterspring Trainers faction.

At that point, you will be able to purchase it for a small sum of 900 gold. If you want to ride it, however, you will need to have learned the Tiger Riding skill. As an elf, this is simple enough as it comes from your faction riding trainers. But if you’re any other Alliance race, have fun grinding exalted reputation with Darnassus. 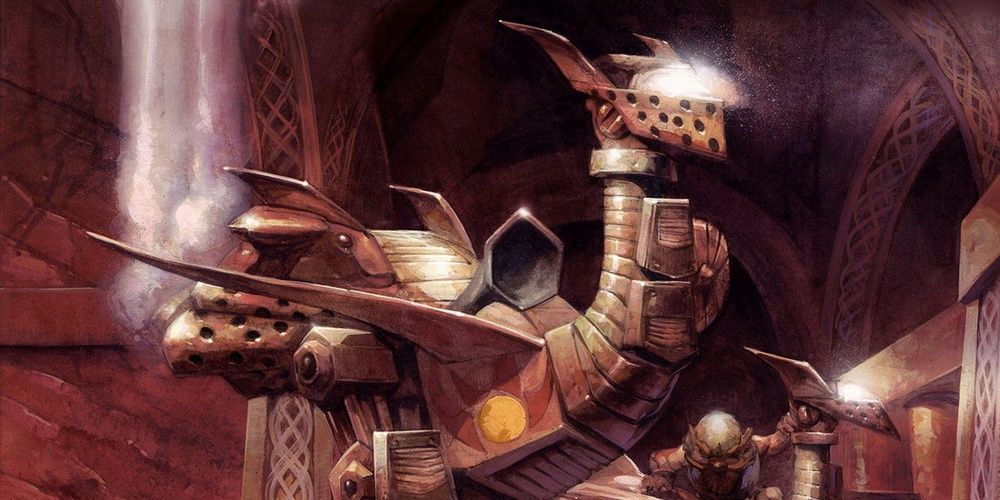 These black colored mounts are only purchasable by characters who have achieved rank 11 in the honor system. Each of them costs 100 gold and can be bought from a vendor in your faction’s PvP rewards hall. The bad news: it’s very hard to grind honor to rank 11 with today’s competitive player base.

On the other hand, the only way you’ll ever actually reach rank 11 is by spamming Alterac Valley battlegrounds as that is the fastest way to gain honor. So even if you decide to chase this pipe dream, you’ll still be working towards the surefire goal of your Alterac Valley mount. 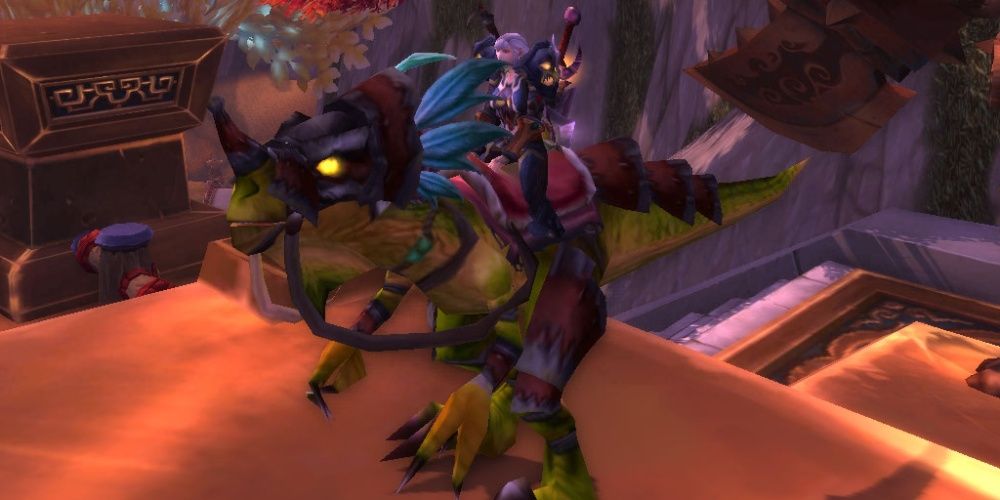 This mount drops off of Bloodlord Mandokir in Zul’Gurub with an incredibly low drop rate. Zul’Gurub does not go live in Classic until Phase 4, and a release date has yet to be announced. Phase 3 was just announced for February 12th though, so you can probably expect Phase 4 to be released sometime around the middle of 2020.

All that being said, looking at research conducted during original vanilla the drop rate appears to be less than one percent. Factor that into the reality that every member of your 20 man raid is going to be trying to win this thing and your chances of ever obtaining it become incredibly slim. 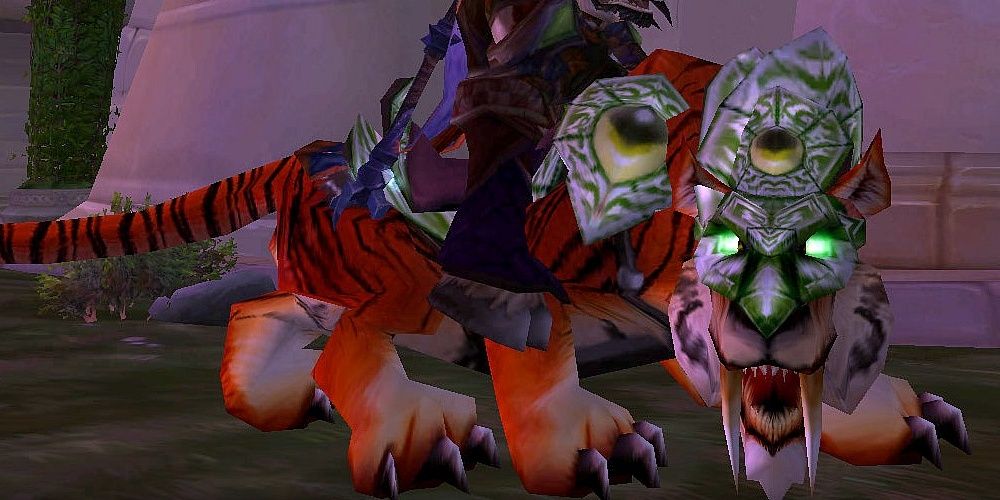 Like the Razzashi Raptor, the Zulian Tiger also drops in Zul’Gurub. Unlike the Raptor, it’s on the boss High Priest Thekal’s loot table. As the exact rates have yet to be released, it’s unknown which mount is rarer.

But in my opinion, the Tiger is a lot more noticeable than the raptor in comparison to the other skins of these mounts. The mount’s burnt orange coloring that’s broken up by midnight black stripes is practically begging for attention. While the Zulian Tiger might not be at the top of this list, it may be the most alluring. 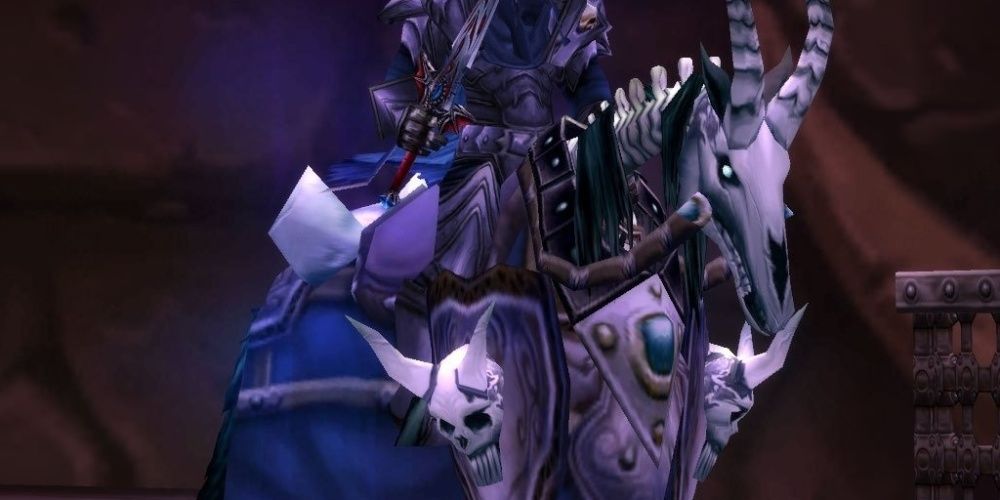 This skeletal horse model isn’t anything too special if you’re playing Horde, but it’s the only skeletal mount available for Alliance players. The blue cloth of the saddle does make it unique in comparison to the normal green and purple of other skeletal warhorse mounts available to Horde players, but it’s not an especially noticeable difference.

All that being said, chances are you’ll never see this drop. Let alone own one. The drop rate is an astonishing 0.02%. Divide that by five for your dungeon party, and you’re left with a 0.004% chance that the mount drops and you win the roll. Good luck. 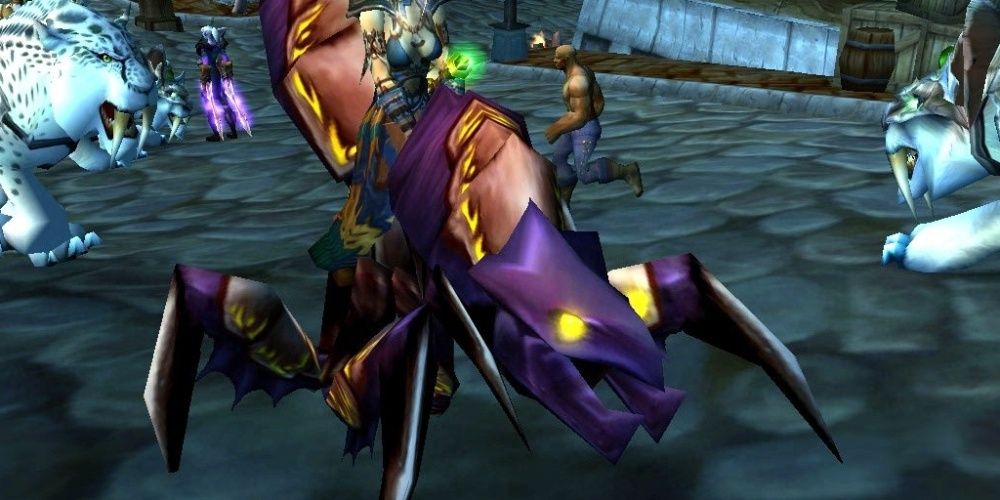 Back during the original release, this mount was only obtainable by players who devoted almost every waking hour to playing the game. It’s the object of a very, very long quest chain. The same one that must be completed by someone on your server in order to open the gates of Ahn’Qiraj, allowing all players access to the raid.

The Temple of Ahn’Qiraj raid won’t be added to Classic until Phase 5, so there’s quite a wait ahead of us. The quest chain is impossible to complete unless you have at least one guild, more than likely multiple, help you farm reputation. And as if that didn’t make it difficult enough, once the quest is turned in by one player a 10-hour timer triggers. Once the timer is up, you will no longer receive this mount as a reward for completing the quest. In other words, keep dreaming.