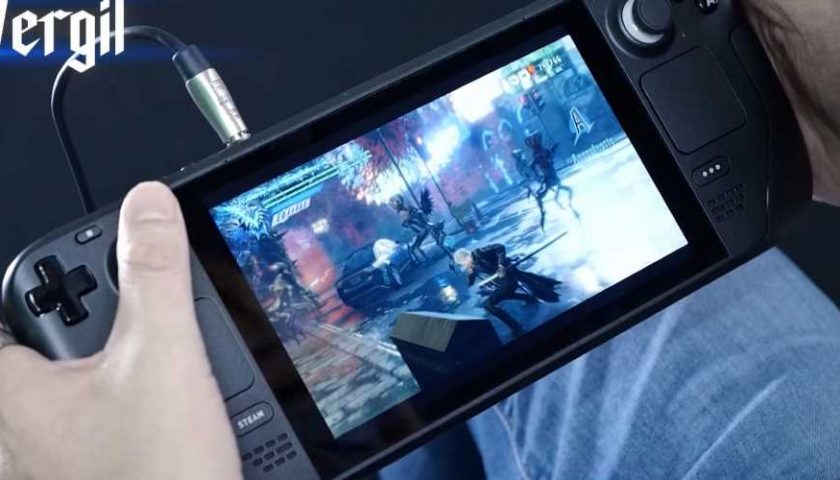 We're still a few months away from seeing the first Steam Deck in the flesh thanks to the global supply chain being more messed up than a pigeon in a woodchipper, but that doesn't mean Decks haven't at least gotten into the hands of developers. Capcom, being one of the platform's biggest publishers, recently showed off Devil May Cry 5 running on the Deck, and it seems to handle the handheld console quite well.

The video is only a minute long, but we see Nero, Dante, V, and Vergil hack and slash their way through hordes of demons with nary a dropped frame to be found. There are no slowdowns, no chunking, no screen tearing, and bright effects don't cause even the slightest hitch.

It doesn't look like the Deck is quite running Devil May Cry 5 at ultra settings or anything, but on the smaller screen, you can hardly tell the difference until the action slows down enough for you to start counting pixels.

We've seen the Deck play Witcher 3, Portal 2, Left 4 Dead, and Control without issue. Now it seems we can add Devil May Cry 5 to the list of approved games. Valve's little handheld is shaping up to be quite the powerhouse.

While the Deck is mostly trying to let people play existing games on the go, Valve might also be working on bringing an entirely new Half-Life experience to their nascent handheld PC. It's not Half-Life 3, obviously, but it's supposed to be a "nostalgia-fest" designed specifically to show off the Deck's capabilities.

Codenamed Citadel, the Deck Half-Life game has been in development for at least three years and so far shows no sign of stopping. We could officially hear about it “within the next year-and-a-half to two years," according to the Valve News Network, which would make it somewhat dated by the time the Deck even arrives. Still, new Half-Life is better than no Half-Life, right?