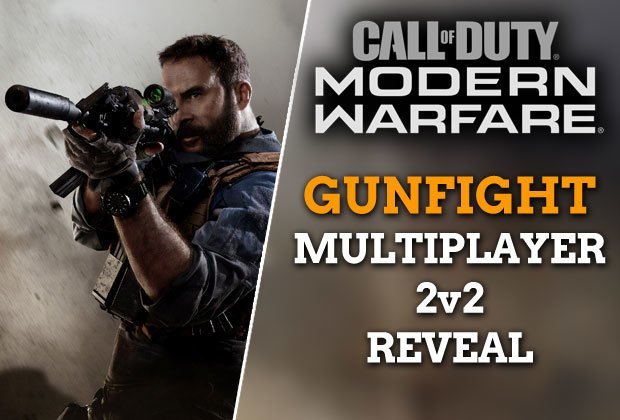 Activision and Infinity Ward have announced that players will get their first look at Call of Duty’s Modern Warfare’s multiplayer mode later today.

The developer and publisher have announced that the debut of this year’s CoD MP mode will go live at July 11 at 12pm CT (that’s 6pm in the UK).

Brace yourselves though, folks – this multiplayer reveal is going to be pretty different from what you’ve seen in CoD games to date.

First up, we’re not going to see Activision do its usual livestream and event-based rollout for the game – instead, it’s going to be a shown to players via various Activision-aligned content creators.

Also, the multiplayer mode debuted isn’t going to be a standard Deathmatch mode – but rather a new 2v2 player experience called Gunfight.

Gunfight will be a 2-vs-2 mode for multiplayer in Modern Warfare (don’t worry, it’ll stand alongside more ‘classic’ modes, too) and seems to be something of a departure from what we’ve seen in CoD games to date.

So far, we only know of four content creators that will definitely be publishing information about the curious new mode in time for the embargo at 6pm this evening.

Two of those taking part are have big history with the Call of Duty franchise. CouRageJD or TeePee‘s will be debuting Call of Duty Modern Warfare multiplayer gameplay on their respective streams (hit the links to see more) later this evening.

They will also be joined by two content creators in the form of Jordan Payton, aka @LEGIQN and Manchester’s own Tom Cassell, better known to his fans online as @ProSyndicate.

Without doing a disservice to the two YouTuber’s, it’s the two more experience Call of Duty expert’s we’ll be most intrigued to watch.

CouRageJD used to be one of the main Call of Duty SportsCasters before going solo in more recent years – so you know you can trust him to deliver decent, in-depth information about the new mode.

He now works with 100Thieves, regularly streaming Fortnite Battle Royale and participating in numerous in-game tournaments – let’s hope his CoD knowledge is as sharp as ever, though.

TeePee (perhaps better known to some as Tyler Polchow), is a ‘retired’ Call of Duty esports professional who most famously won the Call of Duty Championship in 2014 with Team compLexity.

So you know he’s got the expertise to delve into the new MP mode and communicate the most important bytes of information for you.

No doubt we’re going to see more creators speak up throughout the day – revealing that they will also be streaming at 6pm.

We’ll update you as soon as we spot more streamers.