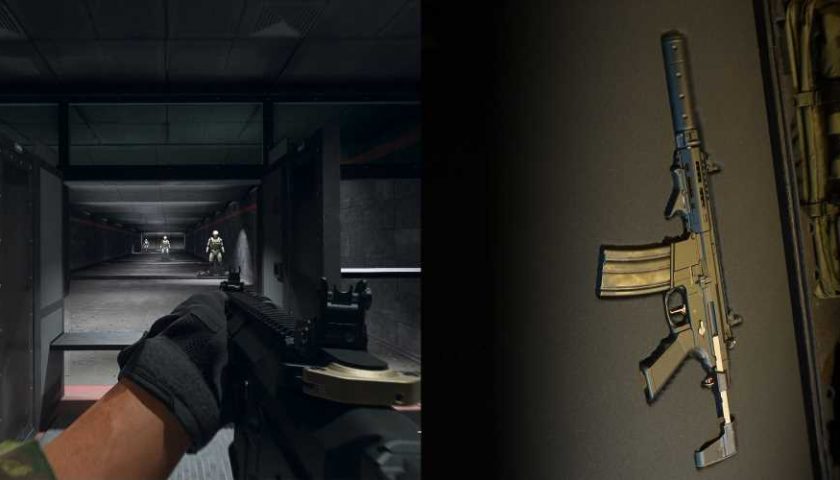 The first season of Modern Warfare 2 brought three new weapons to core multiplayer, one of which released in a mid-season update. The Chimera is a powerful assault rifle that comes pre-equipped with a suppressed barrel and subsonic ammunition, hiding death markers for your enemies. It's an accurate assault rifle that deals great damage, features little recoil, and has some great attachment options.

If you were a fan of the Honey Badger from Call of Duty: Ghosts, the Chimera is effectively the same gun. Use the right attachments and tuning, and you'll have yourself one of MW2's best assault rifles for 6v6 modes and even Warzone. This guide will showcase two excellent Chimera builds that showcase its true potential, focusing on accuracy and stealth gameplay, respecitvely. 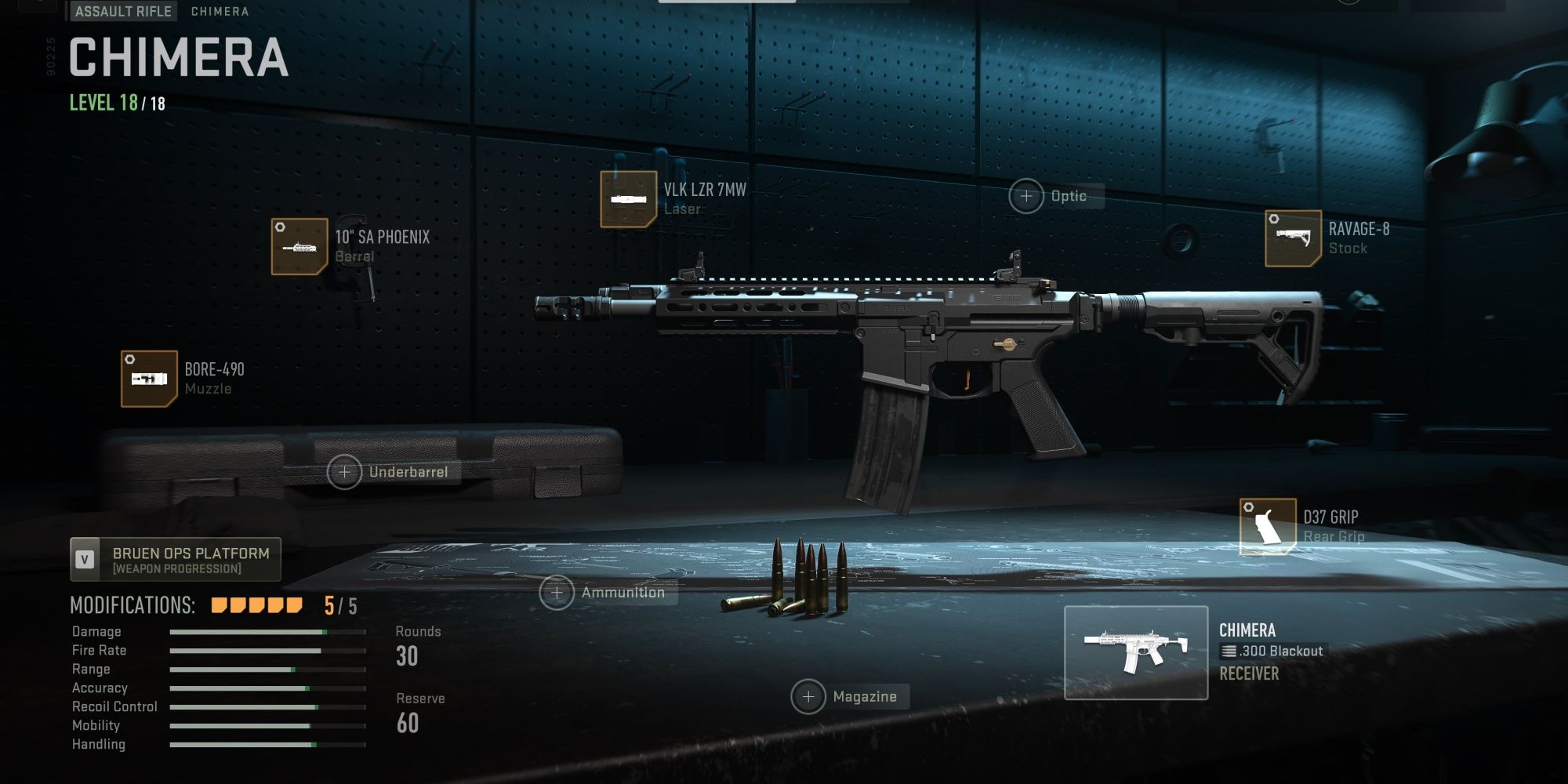 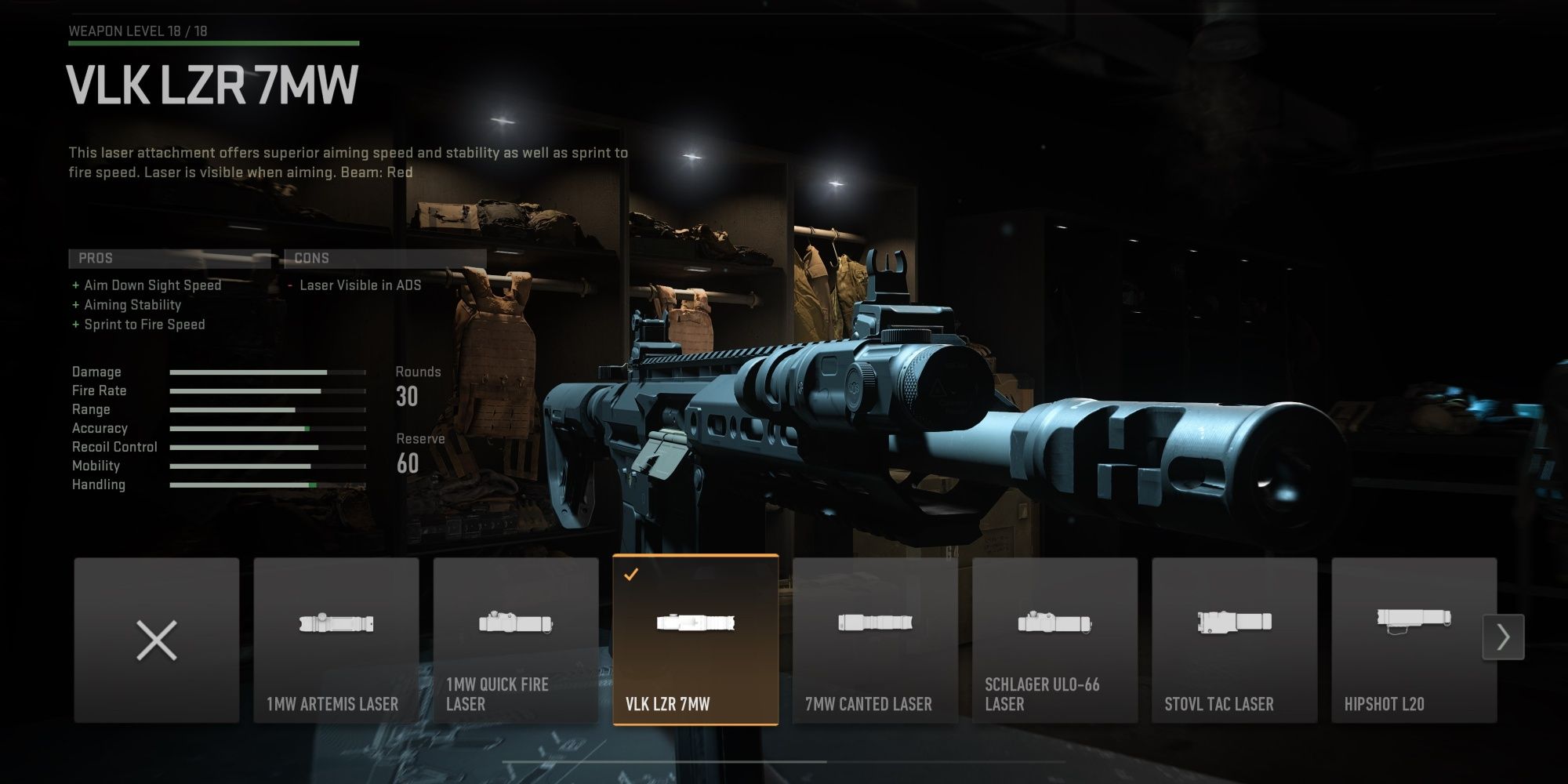 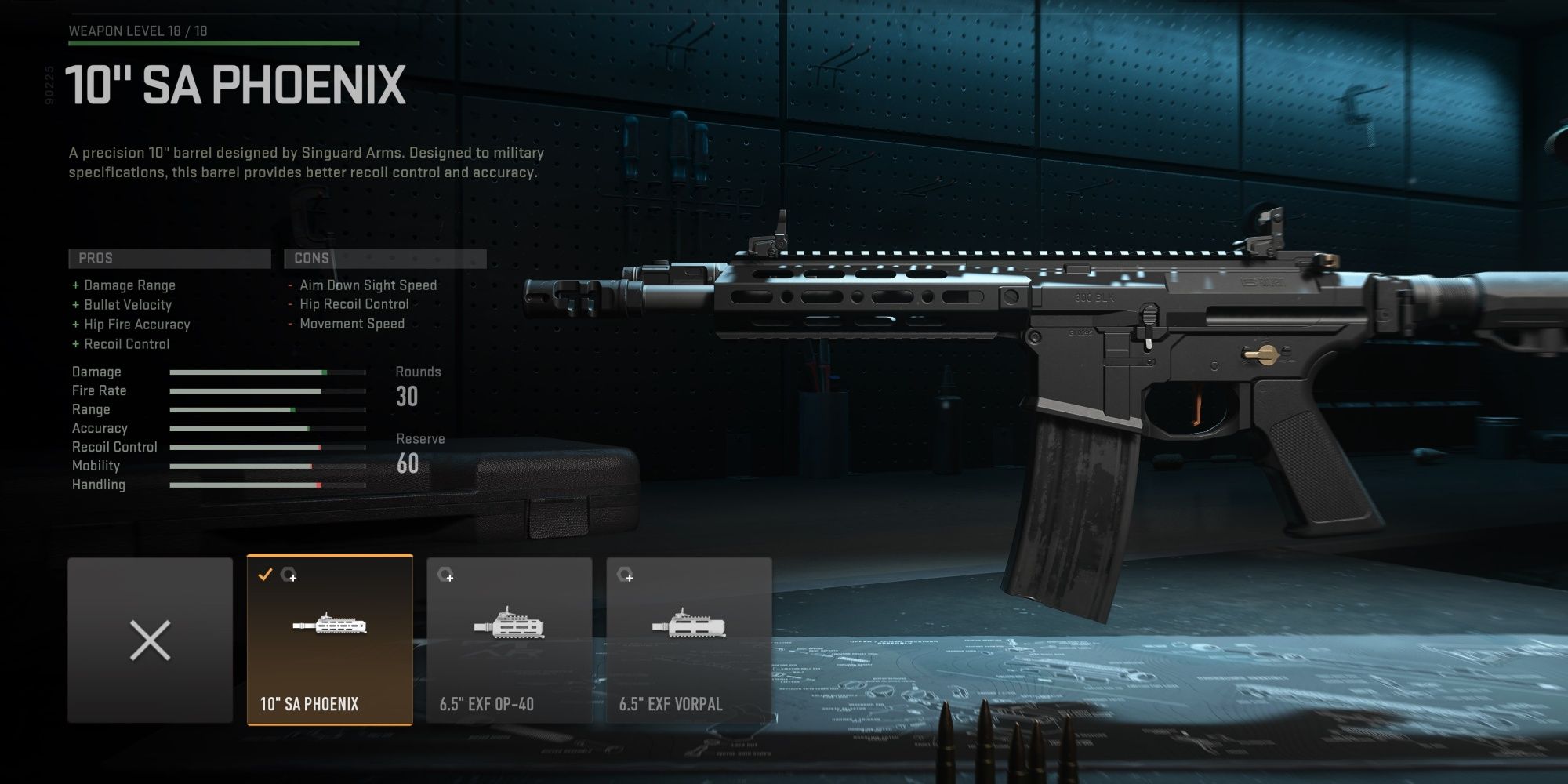 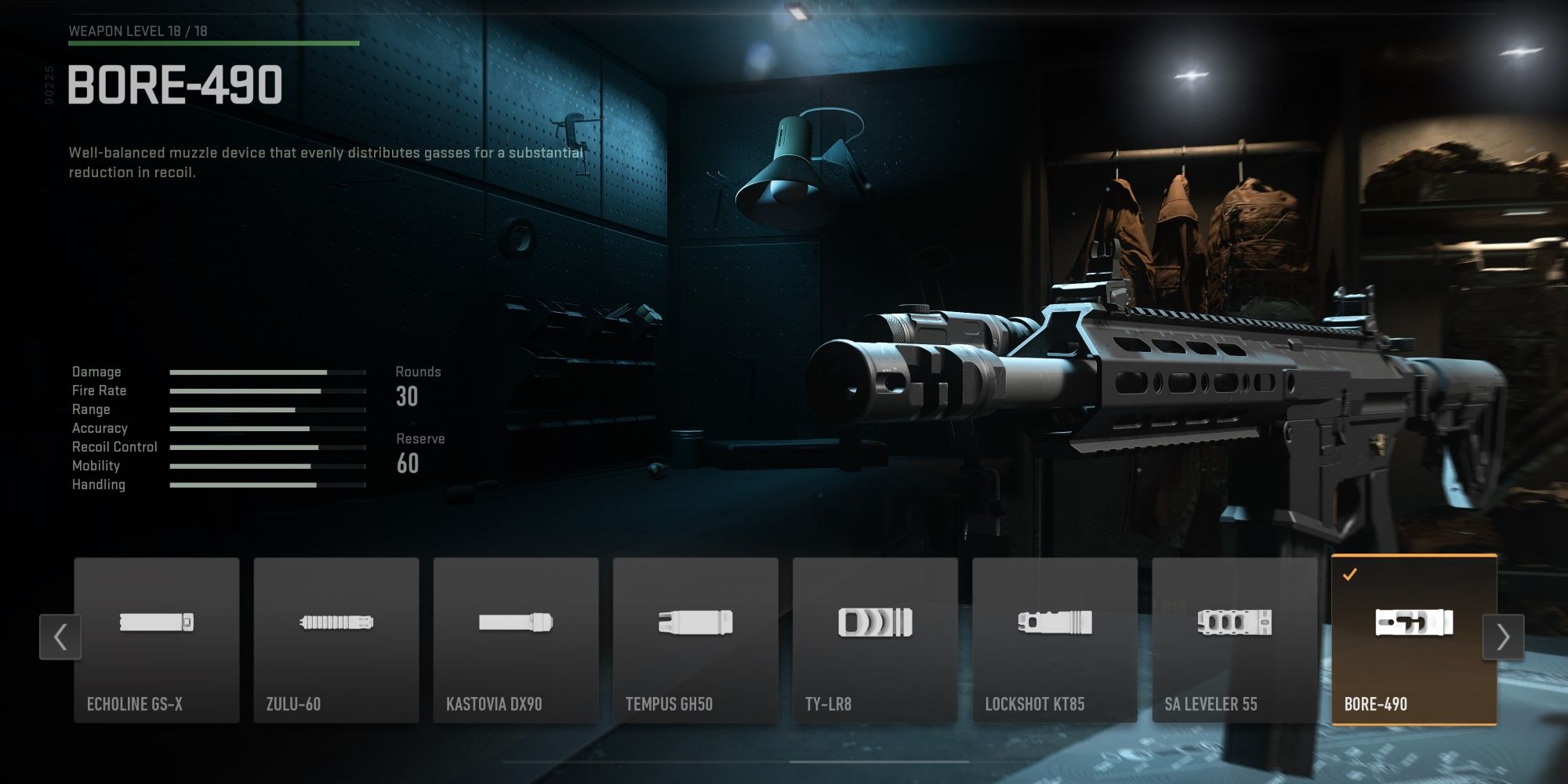 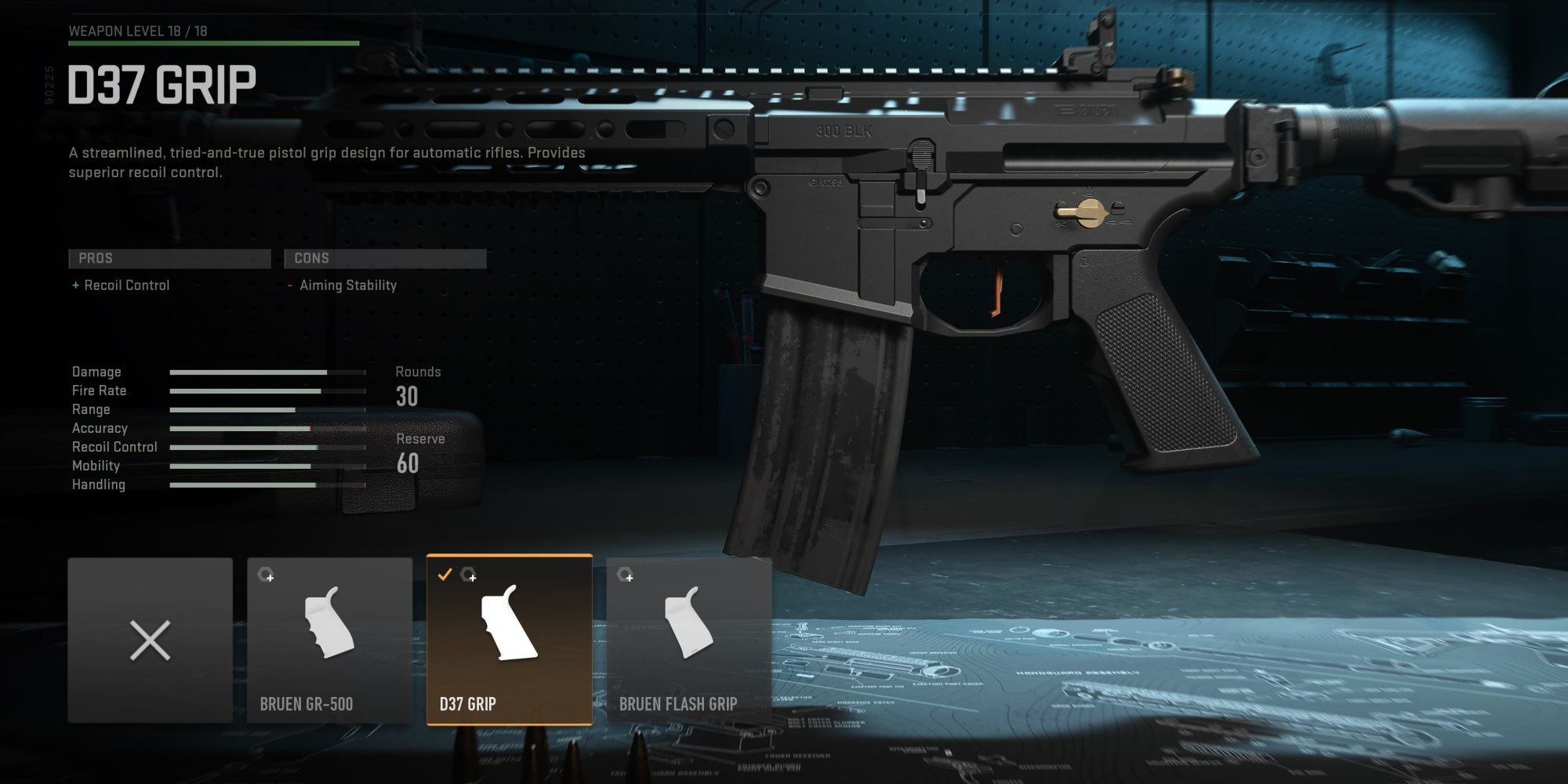 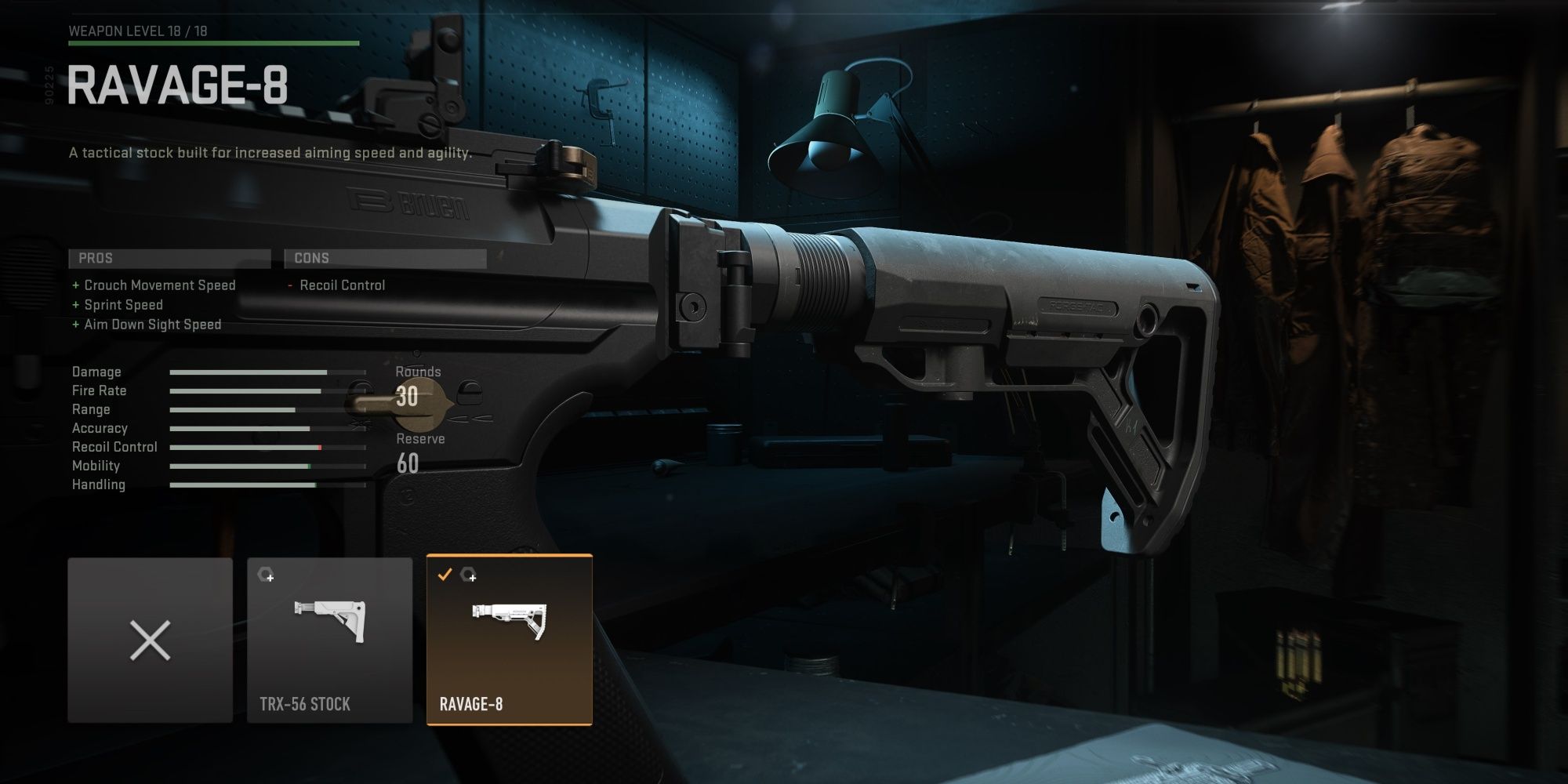 This setup turns the Chimera into a direct M4 competitor, featuring excellent range and virtually zero recoil. We start by replacing the barrel with the 10'' SA Phoenix, granting the weapon a drastic range boost while minimizing our recoil. This opens up our muzzle slot, allowing us to socket the Bore-490 Muzzle to greatly dampen our horizontal recoil. The Ravage-8 stock gives us a noticable mobility boost, and the D37 Grip counters that stock's recoil penalty. For the fifth slot, we use the VLK LZR 7mw to lower our ADS speed and reduce our sprint to fire delay.

Use this weapon like any other assault rifle. It doesn't have the mobility of a Kastov-74u or an SMG, so don't go charging around corners if you're fighting against SMGs. That said, you have virtually zero recoil with this setup, allowing you to land headshots with ease. So long as you can land a few headshots in a duel, you are almost always going to win. If you can't stand the Chimera's iron sights, consider using a canted laser attachment instead of the VLK LZR.

Since this setup doesn't use a suppressor, we're creating a standard neutral game loadout. You'll want to use Double Time to quickly get around the map, Fast Hands to reload your weapons faster, and Quick Fix to instantly heal after a duel. You can use Dead Silence to sprint without making loadout footsteps, and Drill Charges will ensure campers aren't safe from you. As for your secondary, use whatever you like. Fastdraw handguns are a great pick, but Fast Hands makes it quite easy to use rocket launchers as well; use what you prefer. Overkill is also worth considering if you don't care for Bomb Sqaud. 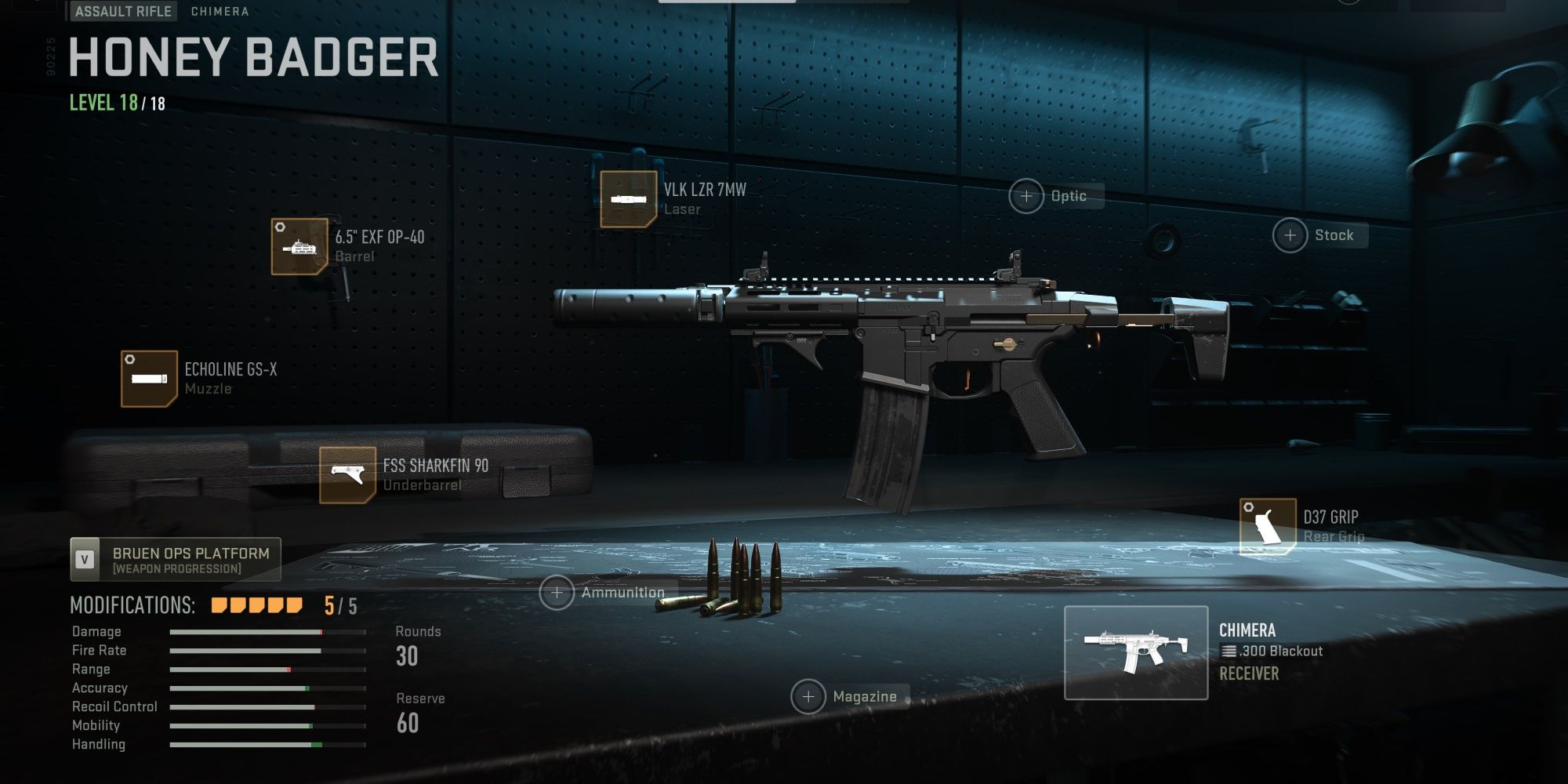 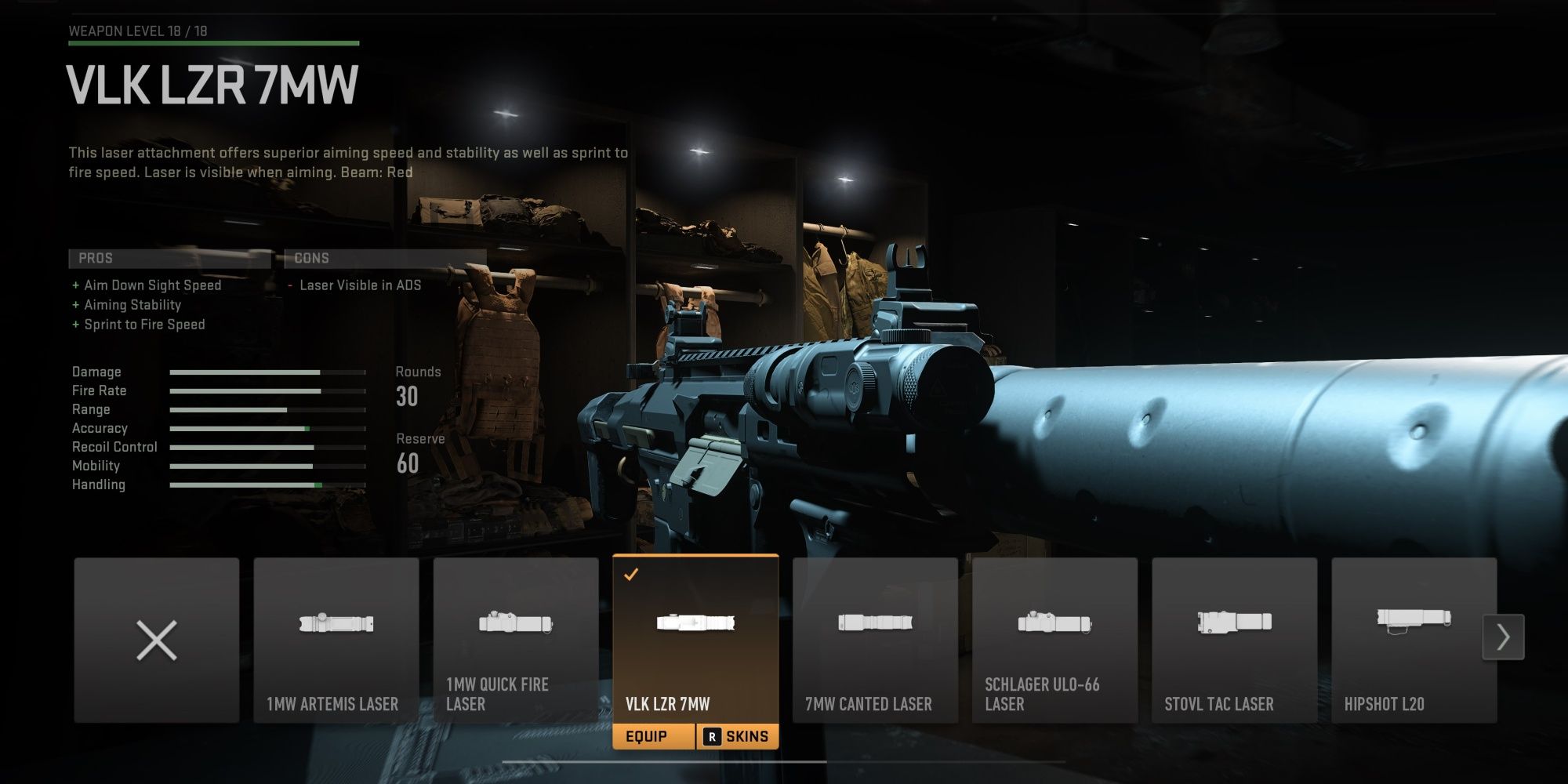 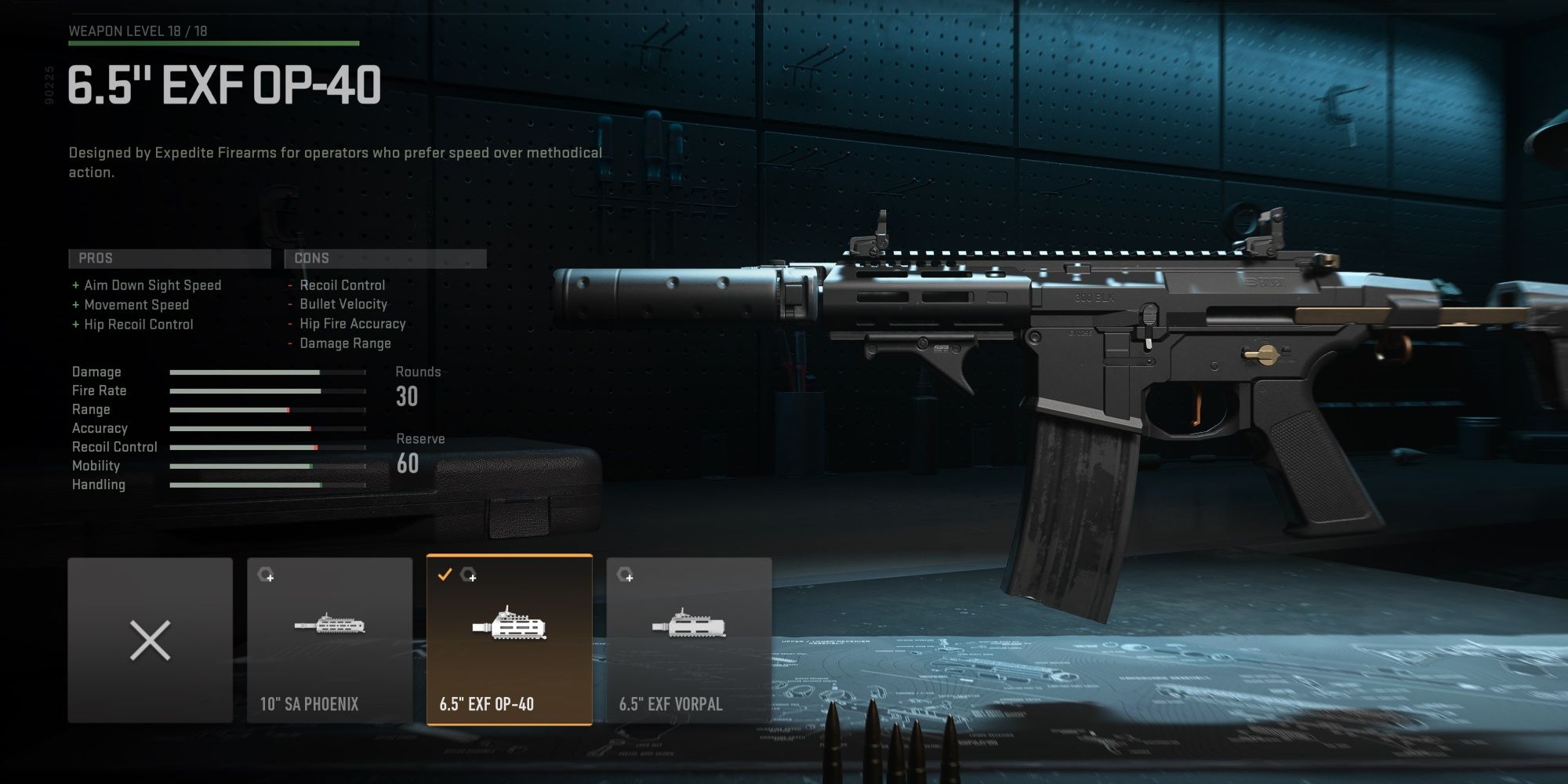 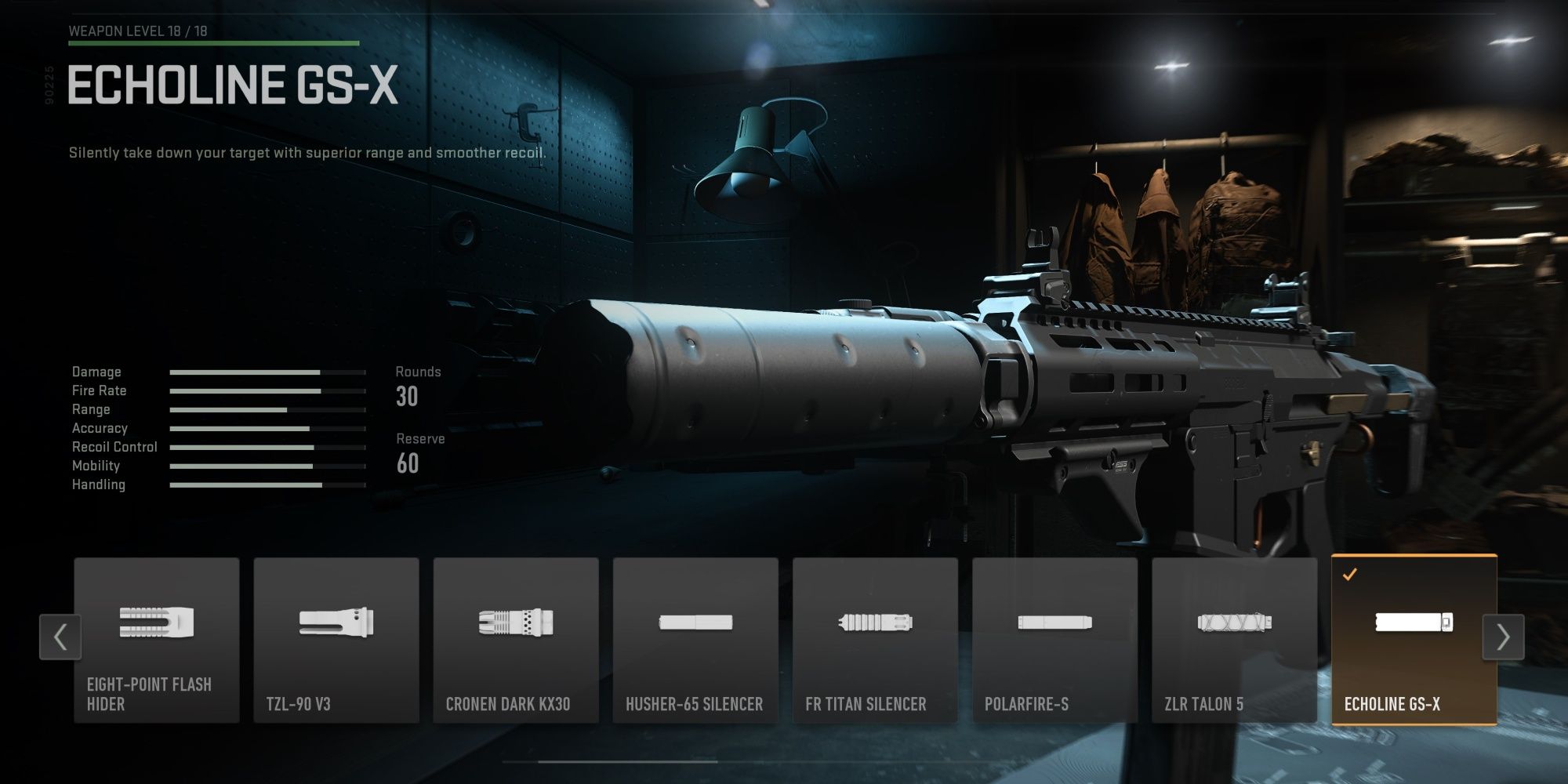 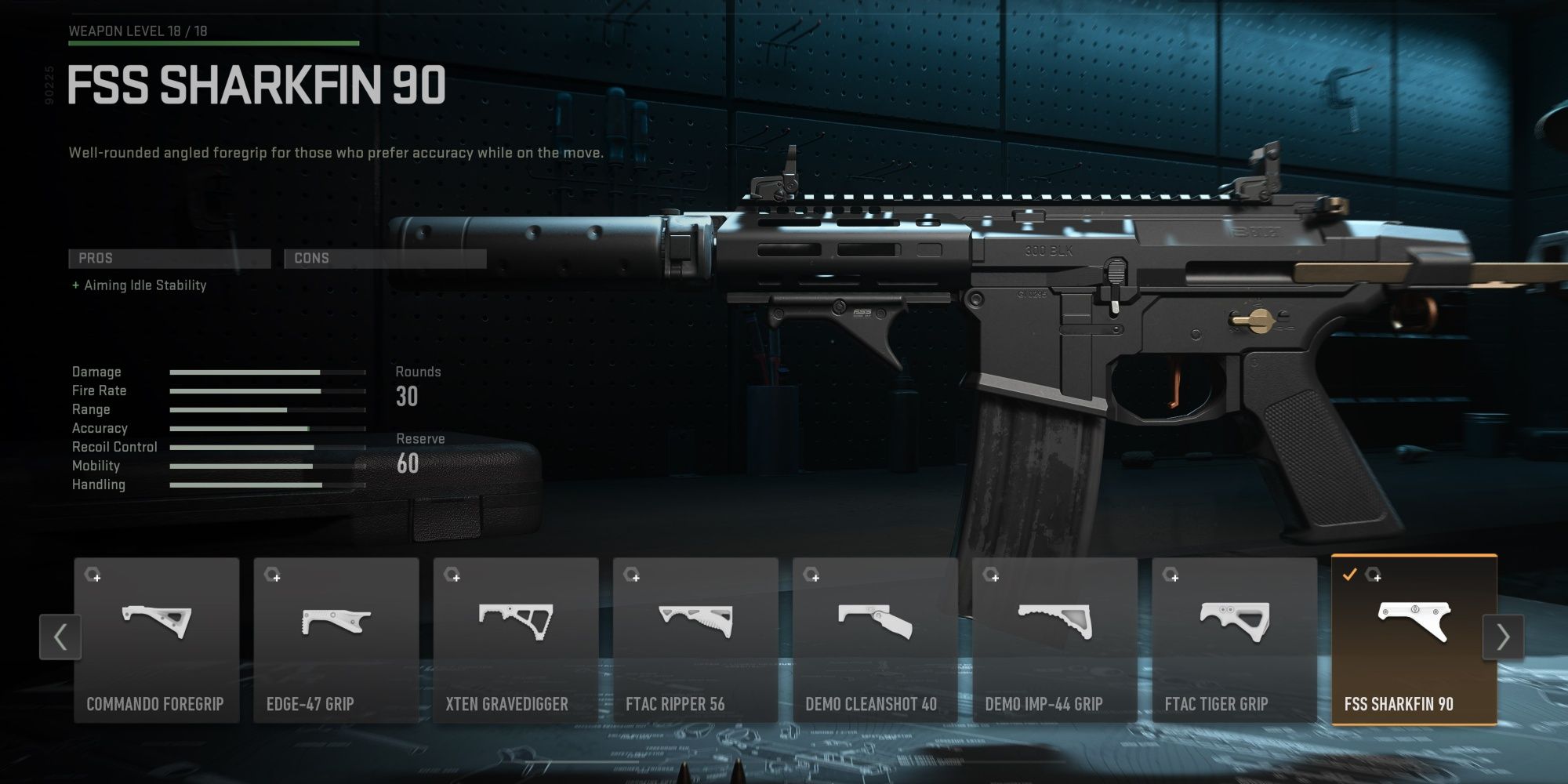 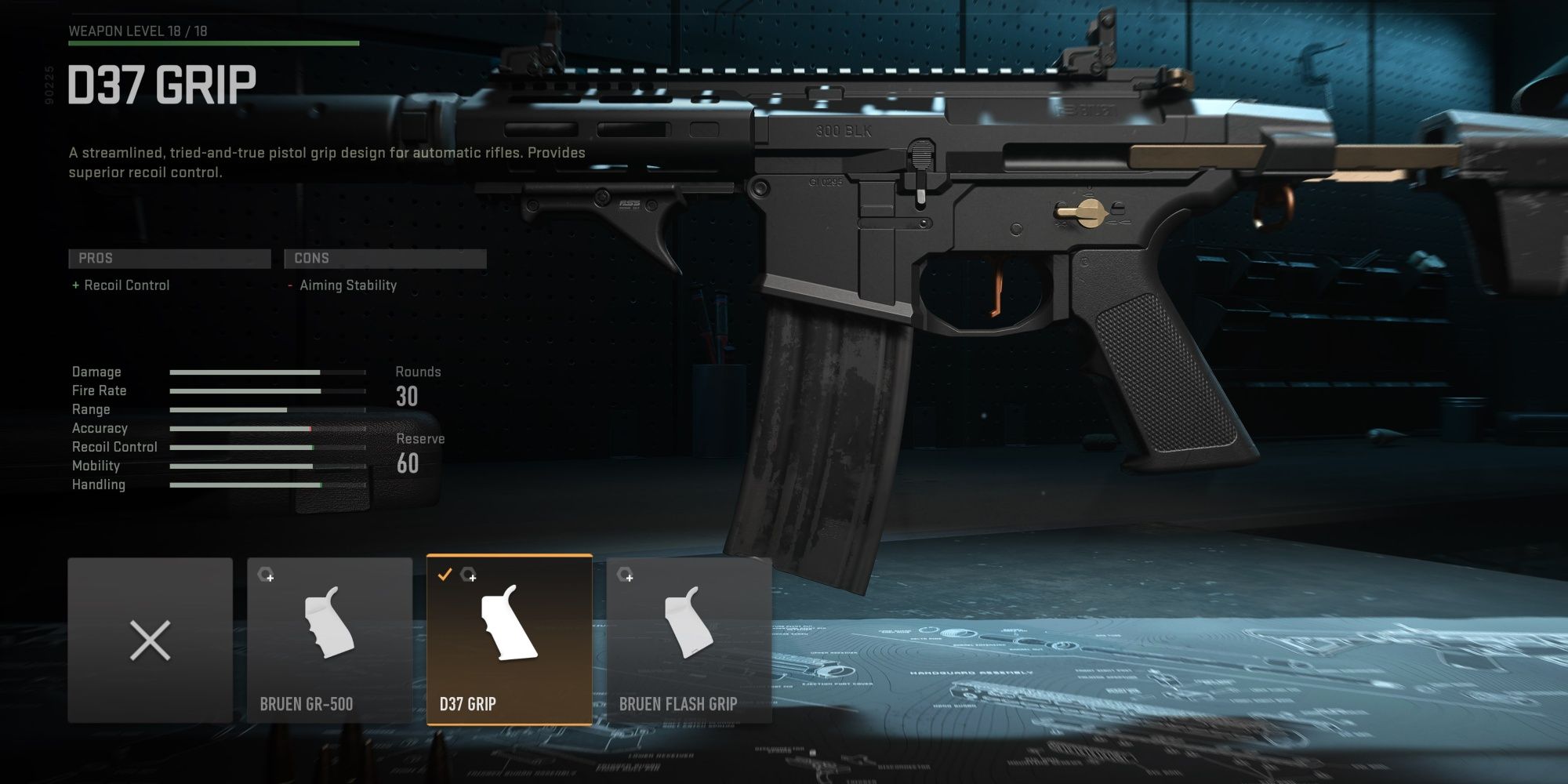 This loadout attempts to recreate the Honey Badger from Call of Duty: Ghosts, tuning this weapon for aggression and stealth. The base barrel on this weapon isn't great, so we're going to fix that by equipping the 6.5'' EXF OP-40 barrel alongside the Echoline GS-X suppressor. The barrel says it has a range penalty but actually buffs our effective range slightly atop of its other listed pros. To help mitigate the gun's recoil, the Echoline suppressor will give us a slight boost to recoil control. The FSS Sharkfin 90 underbarrel grip and VLK LZR 7mw grant a massive boost to our aiming stability and ADS times, and the D37 Grip helps further reduce the gun's recoil. Once again, feel free to replace the VLK LZR 7mw with a canted laser, or consider dropping the Sharkfin 90 for your favorite sight.

Stealth gameplay complements this build well. Your shots are suppressed and don't leave behind kill markers, so it should be easier to flank enemies in most multiplayer modes. Compared to our prevoius build, this build is slightly less accurate but far more mobile. You still won't beat out good SMG players, but some general map awareness is all you need to dominate with this gun.

We're going for a stealth build with this gun. You can't go wrong with Double Time and Bomb Squad for traditoinal 6v6 multiplayer. Fast Hands is a fantastic perk for every loadout, although feel free to use Cold Blooded if enemy killstreaks frequently kill you. Ghost helps minimize your uptime on enemy UAVs. You'll still appear when you shoot, but at least that radar ping has a slight delay. Activate Dead Silence when you need to flank, and use your Throwing Knife to quickly kill someone or finish off a downed opponent. Stims are always a good pick if you aren't running Quick Fix.