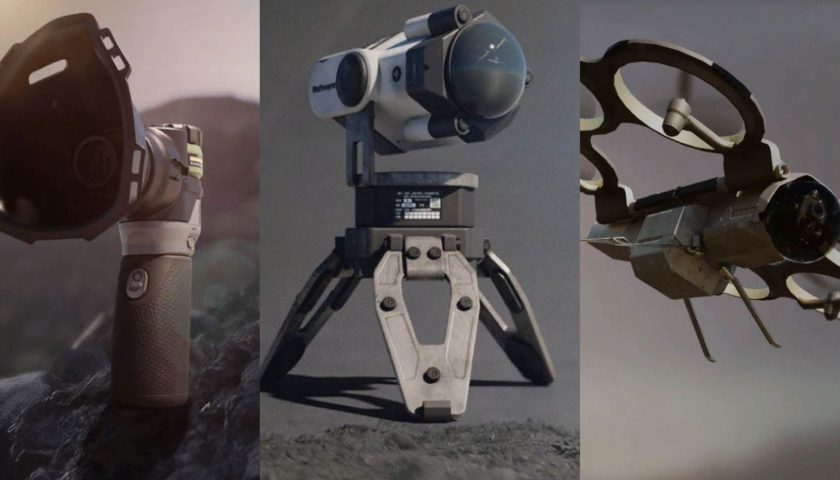 Field upgrades offer interesting tools to supplement your class loadout in Call of Duty: Modern Warfare 2. These tools bring unique offensive and defensive utilities which could create better opportunities for your team and deny any cheeky plays from your opponents. Additionally, field upgrades aren't reliant on Killstreaks, so you can always contribute even during a bad game.

There are 15 field upgrades in Modern Warfare 2. Choosing which two of them to slot into your class loadout is a big decision. While field upgrades are often overlooked in favor of guns, Killstreaks, and perks, bringing the right equipment for the mission can enhance your gameplay. 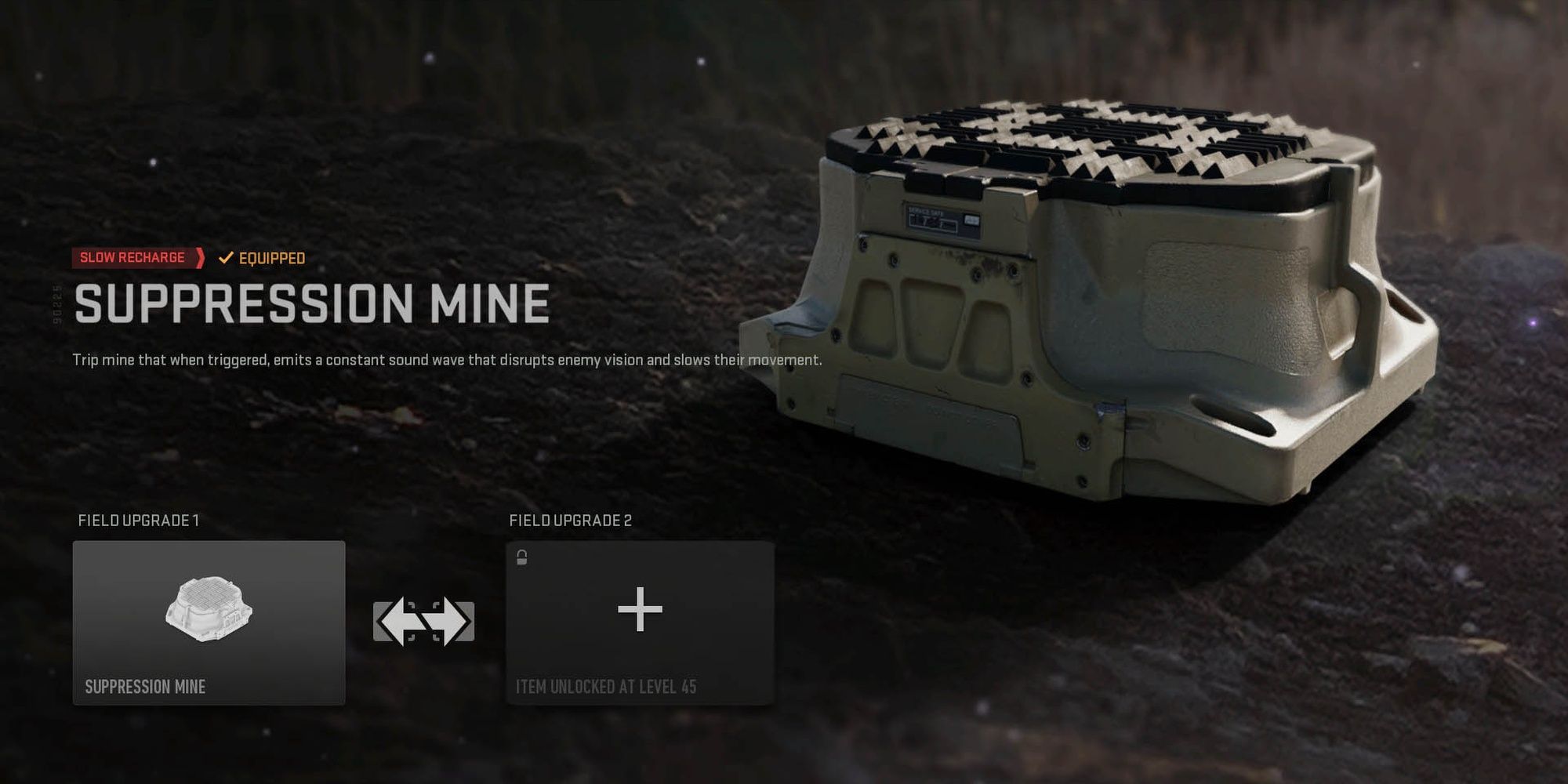 The Suppression Mine deploys a small trip mine that triggers when an enemy is nearby. On activation, it sends out a nasty sound wave that disrupts the enemy's vision and slows down their movement speed. It sucks to be on the receiving end of the Suppression Mine, since the effect scrambles your HUD and provokes confusion.

This field upgrade is most effective during small maps with tons of sharp corners. Enemies will have a painful time breaching your position with the mine protecting you. Furthermore, it triggers an audible bang, alerting you of any flankers. 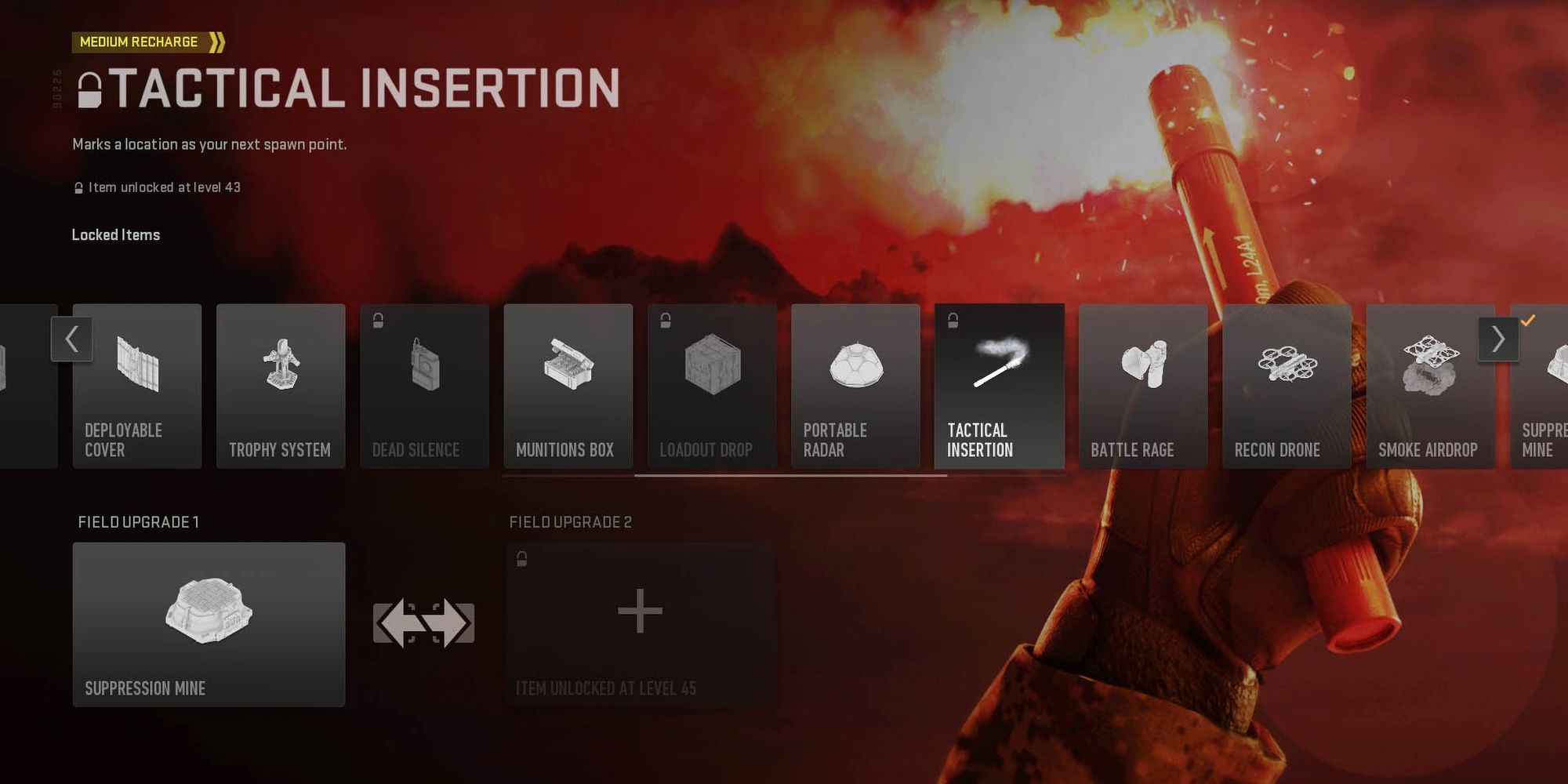 The Tactical Insertion field upgrade lets you put a flare down at any given location. Upon death, you'll respawn right where you left it. Just avoid placing the flare where your enemies can easily see it because they'll be more than happy to wait for you to spawn-kill you.

Tactical Insertion works best during Ground War and Invasion maps because of how expansive and spread apart the spawn points are in these modes. Place the flare deep behind enemy lines to catch them off guard. 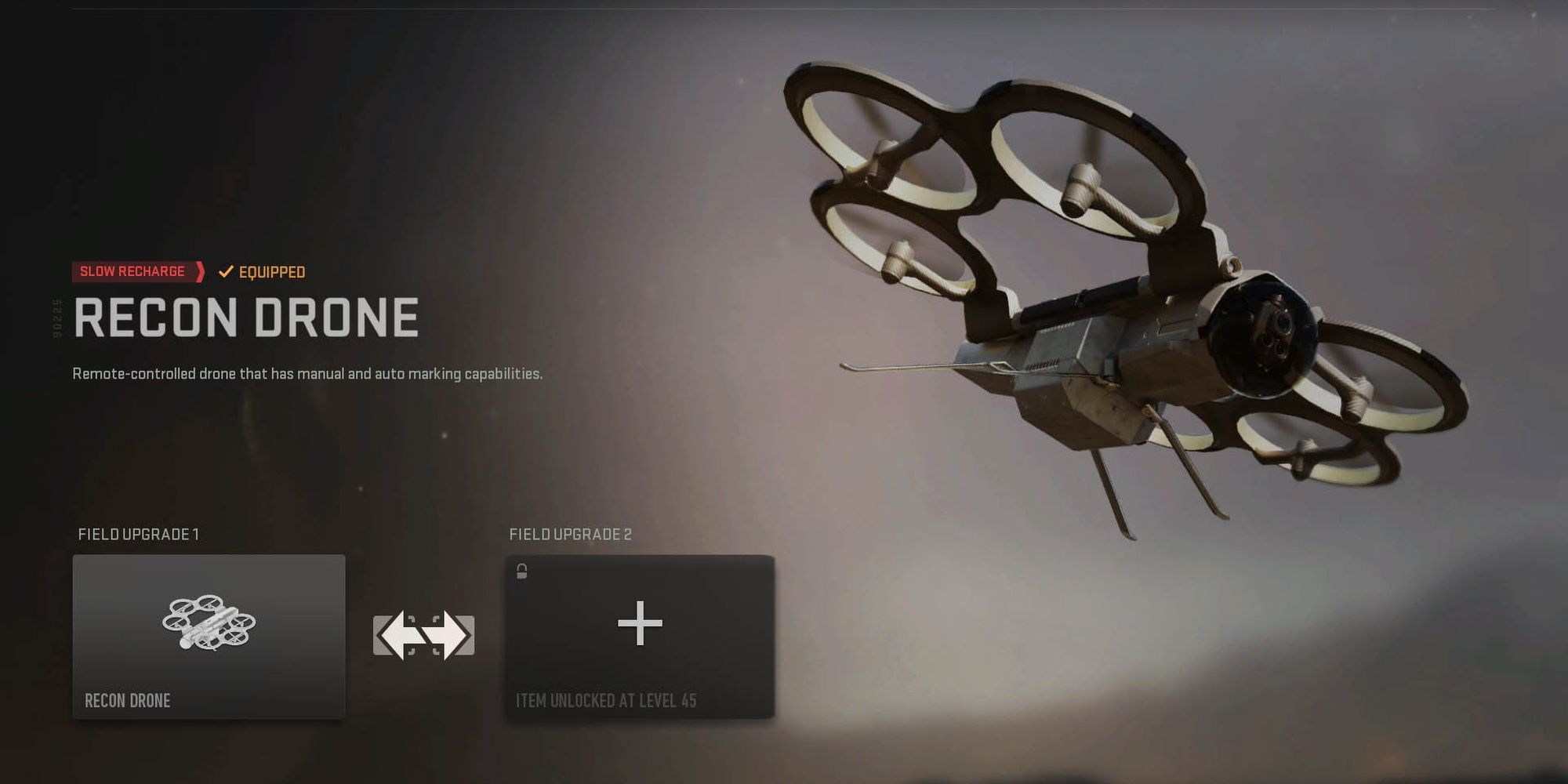 If you love supporting and enabling your team, the Recon Drone is a great field upgrade for your skillset. Deploying the remote-controlled Recon Drone lets you pilot it to mark enemies manually; it can also automatically target enemies as long as it has enough time to do so.

The Recon Drone is a lifesaver in one-life game modes like Prisoner Rescue and Knock Out. The time-to-kill in Modern Warfare 2 is ridiculously fast, and knowing the enemy team's location will help your squad with precision. Also, attaching C4 to the drone and sending it flying toward your opponents is a hilarious way to take them down. 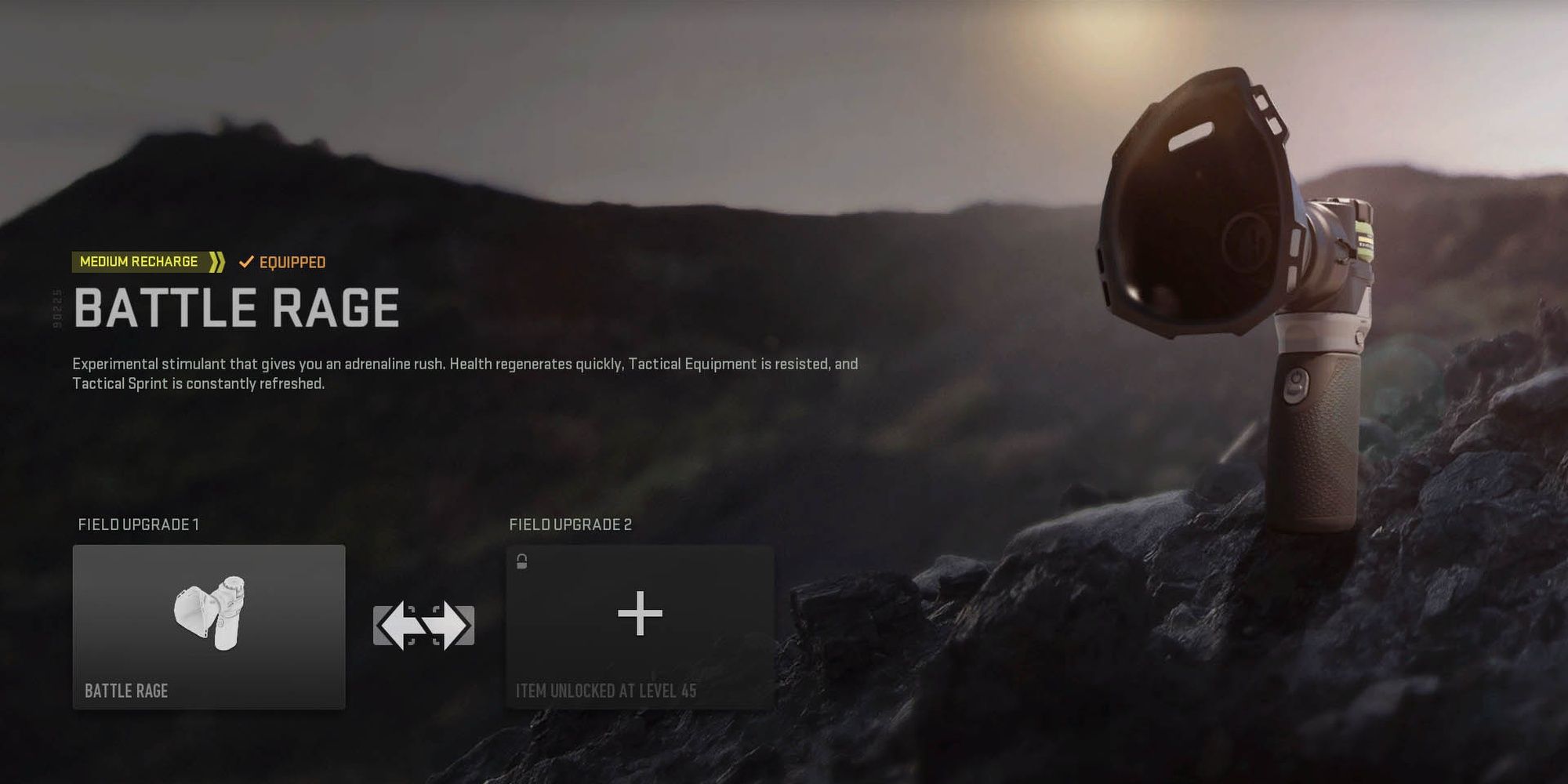 The Battle Rage field upgrade is an experimental stimulant that gives you an on-demand adrenaline rush. Additionally, you'll resist tactical equipment like flash grenades while enjoying a near-unlimited tactical sprint. While inhaling this performance booster makes you feel unstoppable, don't forget that any operator can still bring you down.

Battle Rage is perfect for class loadouts that want to rush in the enemy's face but lack range on their weapon for a proper flank. On wider maps, you'll want to run this military-issued vape with your shotgun or an SMG. 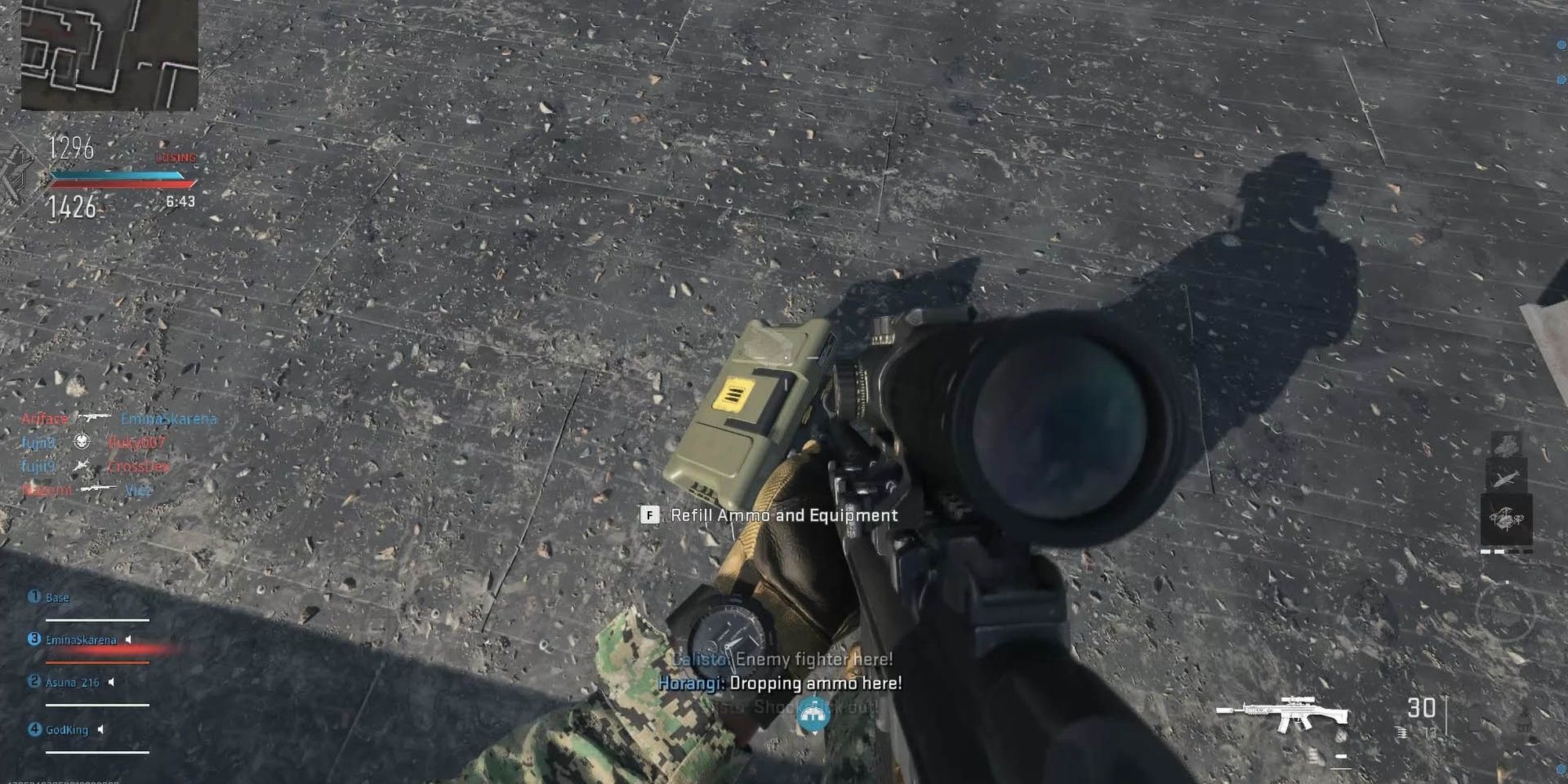 If you're one of the rare people with a positive KDA, you've probably been in a situation where you're running around with your sidearm out, searching for a weapon to scavenge.

You should bring the Munitions Box field upgrade to place a box of ammo and equipment. You and any teammates can interact with it to fully replenish ammo, tacticals, and lethals. The Munitions Box is best used during Ground War and Invasion, especially when leveling up a weapon. 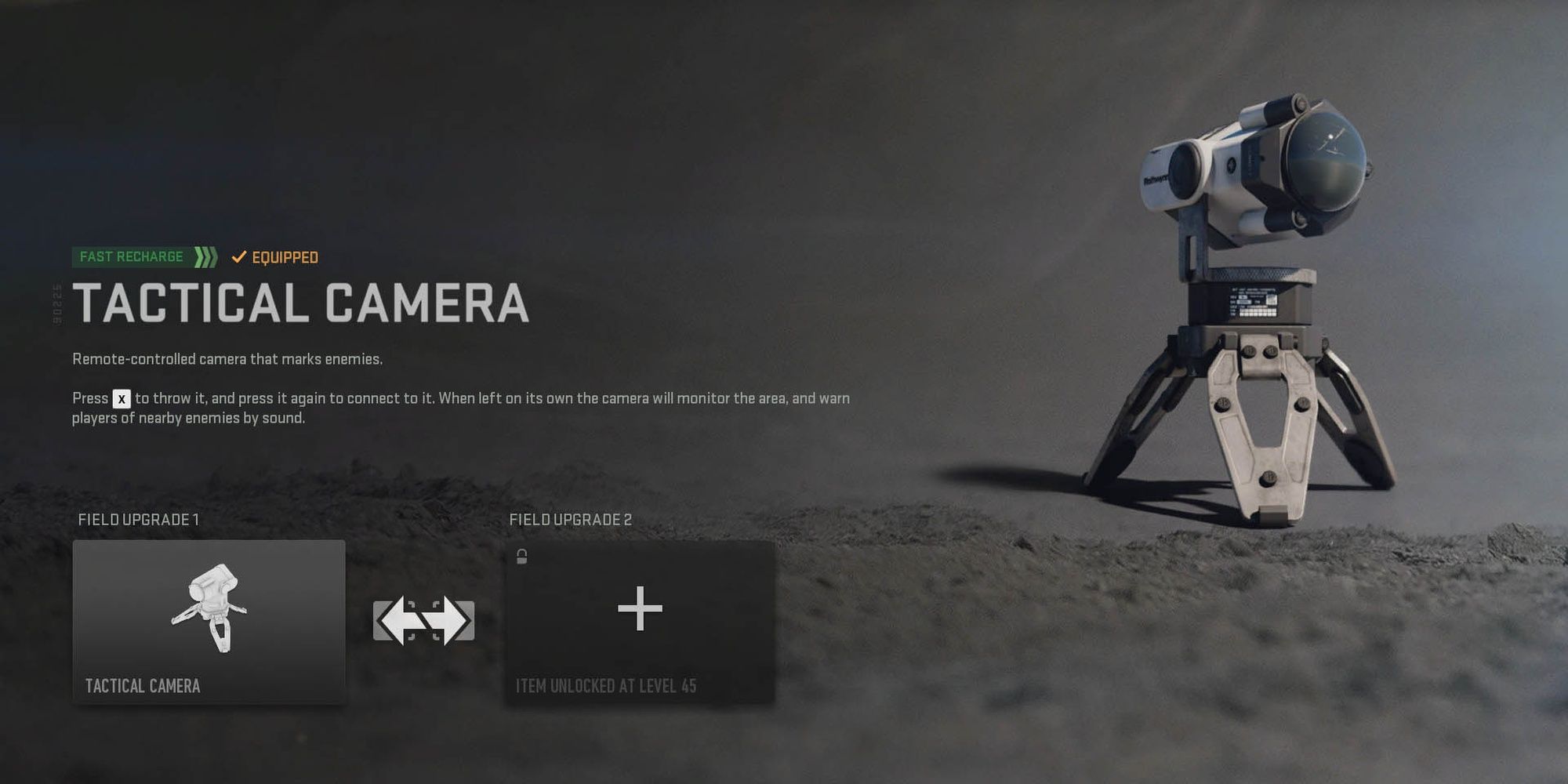 The Tactical Camera field upgrade is a throwable camera that attaches to any surface. Once set up, you can manually control the camera to mark enemies or align it with watching a certain angle. If you're not directly using the Tactical Camera, it will send an audible cue if it spots an enemy.

The sneaky Tactical Camera is impeccable at watching for any flanking operators. Another good way to use this field upgrade is to place it at a high-traffic area and angle it only to watch one path. That way, you can pre-aim one route while the camera alerts you if they went the other way. 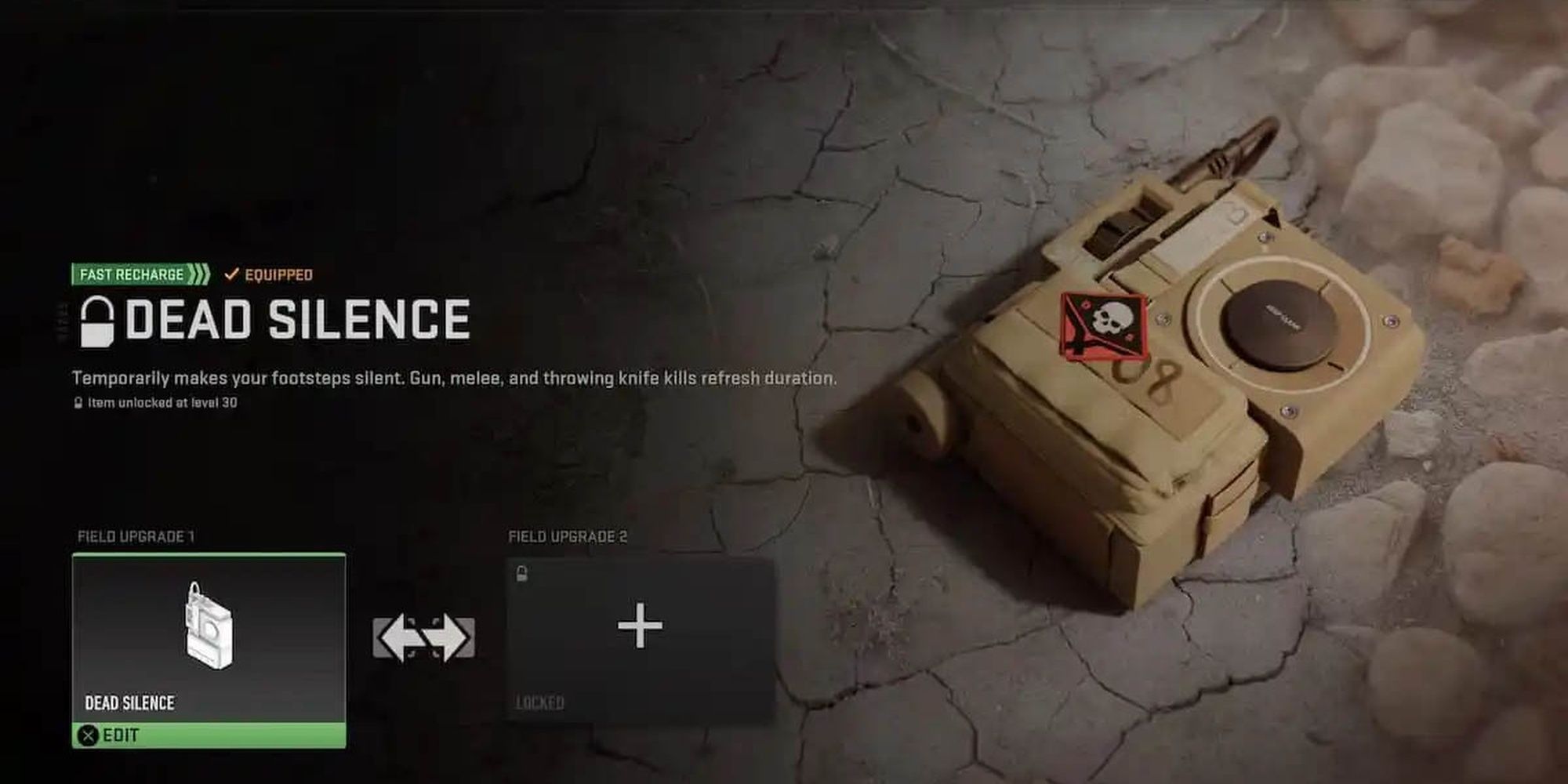 In past Call of Duty entries, Dead Silence was an important perk for flankers, since it reduced the amount of noise you made while moving around. In Modern Warfare 2, they made this perk into a mandatory field upgrade for any stealth or flanker class loadout. Just know that you're announcing to the whole lobby every time you activate it.

Using Dead Silence makes all your footsteps silent, including jumping. You can refresh the brief duration by getting eliminations in any manner. Dead Silence synergizes well with a weapon attached with a suppressor. Perks like Ghost and Cold-Blooded also enable you to sneak up on their backline. 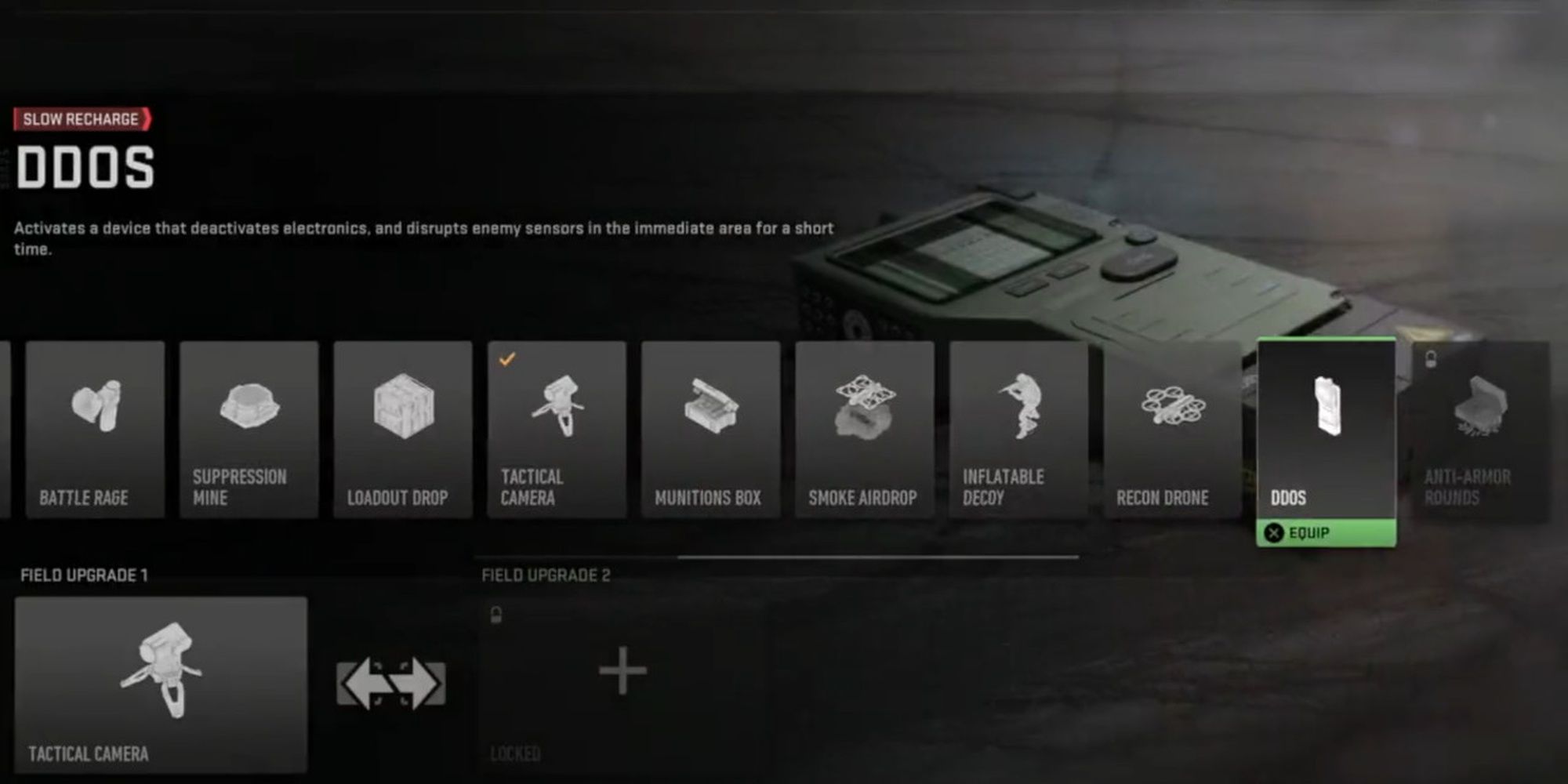 The DDoS field upgrade is a handheld device that temporarily deactivates electronics and disrupts enemy sensors in its effective area. Think of it as a mini EMP and counter UAV rolled into one nifty tool. DDoS is invaluable for leaving your enemies defenseless by disabling their supporting equipment.

The DDoS is a must-have field upgrade in objective-based modes, where you'll have to attack a small area, like Domination, Hard Point, and Headquarters. If you're close enough, you can deactivate their defensive field upgrades like the Trophy System and Portable radar. Additionally, you can also take out annoying devices like the Wheelson-HS. 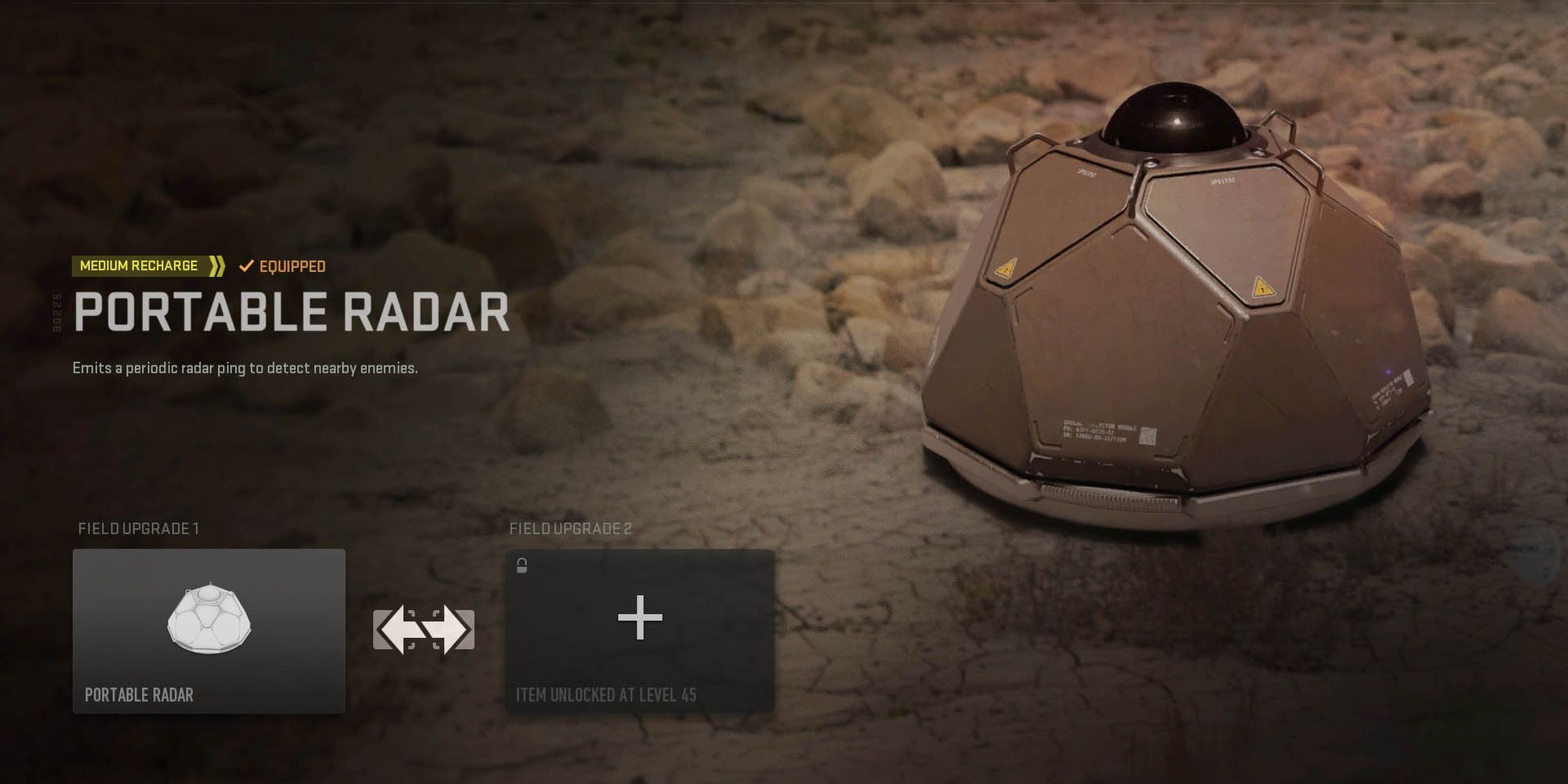 The Portable Radar does exactly what its name suggests. Deploying the small device emits a periodic radar ping and tags enemies in the surrounding area. Whether scouting what's behind walls or covering your flanks, you can never go wrong with this useful field upgrade.

A well-placed Portable Radar provides beneficial information to you and your team. Remember that you don't have to be near the device for it to work. You can get a ton of value from this field upgrade just by leaving it in contested buildings or popular sniper spots. 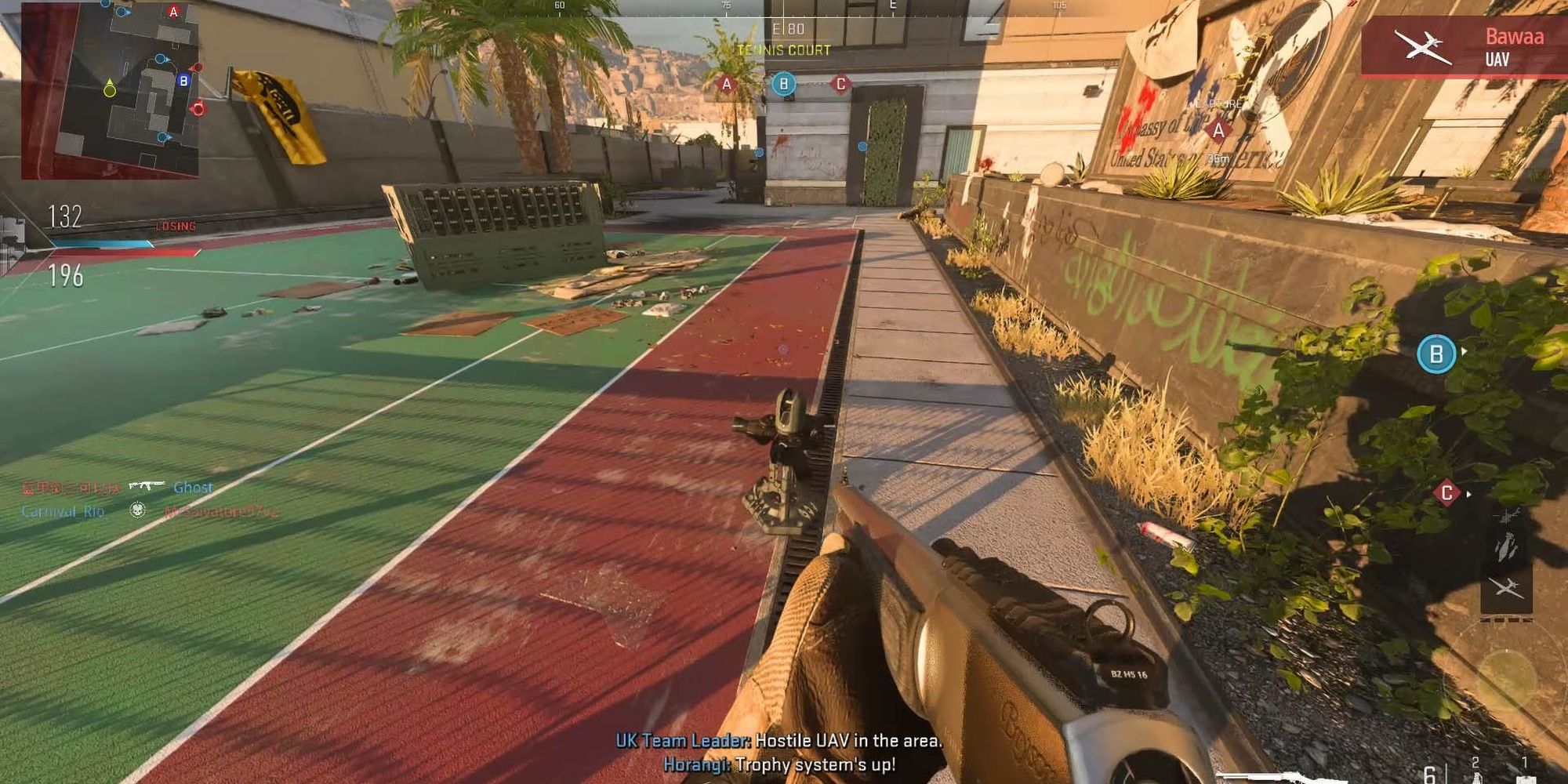 The Trophy System is an all-in-one defensive tool that will save your hide from every projectile thrown your way. The field upgrade is an automated defense system that destroys up to three incoming projectiles. Plop this bad boy down, and it will zap all incoming grenades and the occasional missile.

It's a miserable time attempting to defend an objective without any protection from grenades coming from all directions. You could even equip this field upgrade on your marksman rifle loadout to further fortify your vantage point.