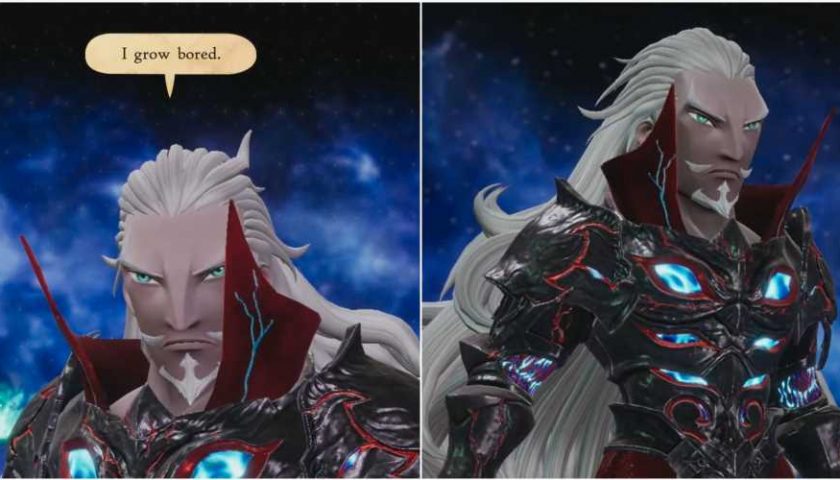 So you’ve finally got an opportunity to lay the smackdown on Adam. As is fitting for the guy who killed your mentor, Adam is no pushover. Thankfully, he isn’t as immortal as he was back during the prologue.

Bravely Default 2 is not shy when it comes to throwing pumped up bosses your way. Whilst not a grind-fest, the game is certainly quite the challenge. None more so than the dastardly, dashing Adam. Taking the guy out nets you the Hellblade Asterisk too. 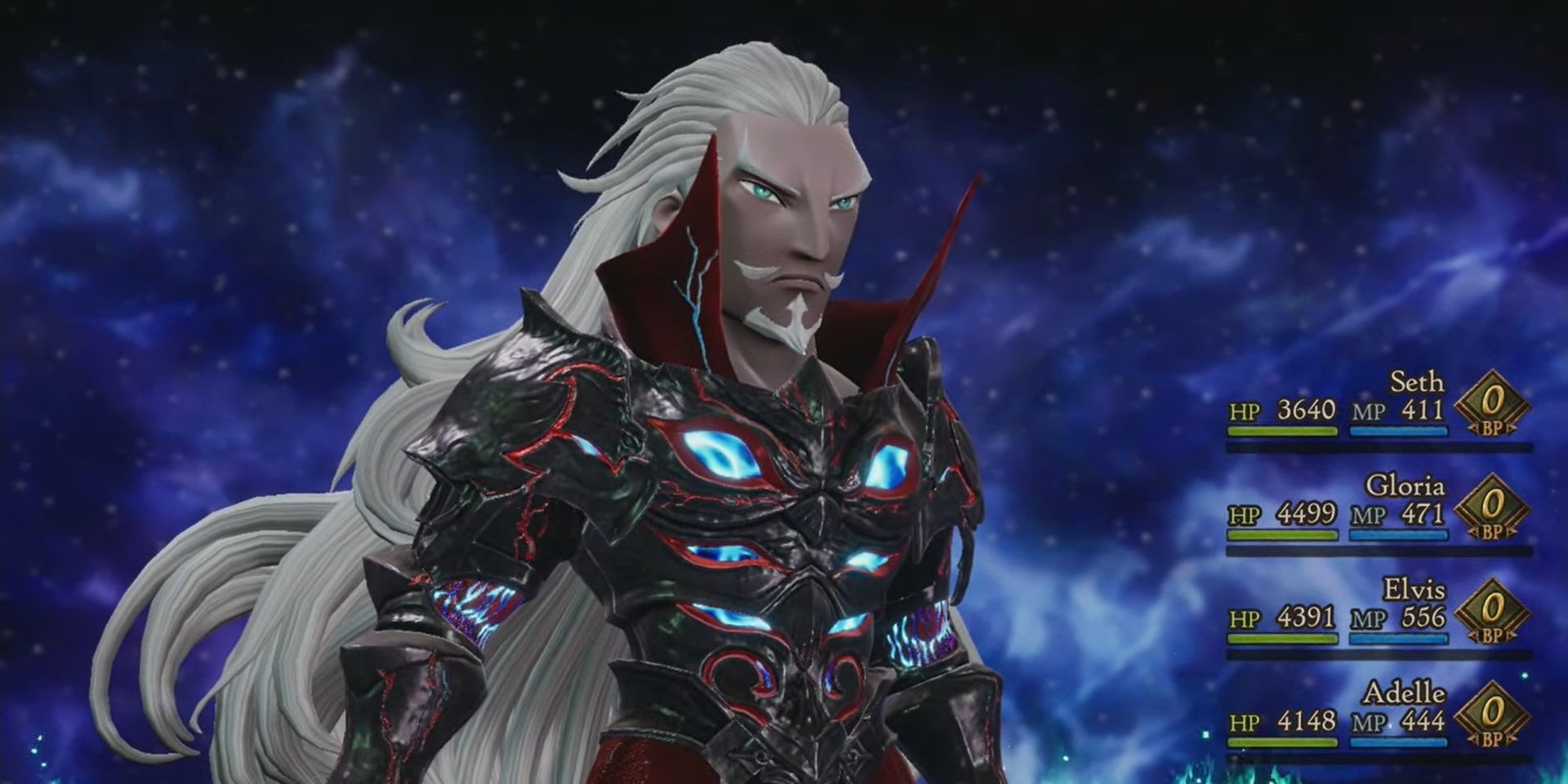 Adam is pretty simple when it comes to his weaknesses. He has a pretty wide array of resistances, but is not immune to anything and absorbs nothing. This is handy because it leaves a lot of weapons and magics viable for damage dealing.

Of course, the most obvious form of attack will be from Axe users, but there are a few ways you can take Adam down – mostly due to how he attacks. 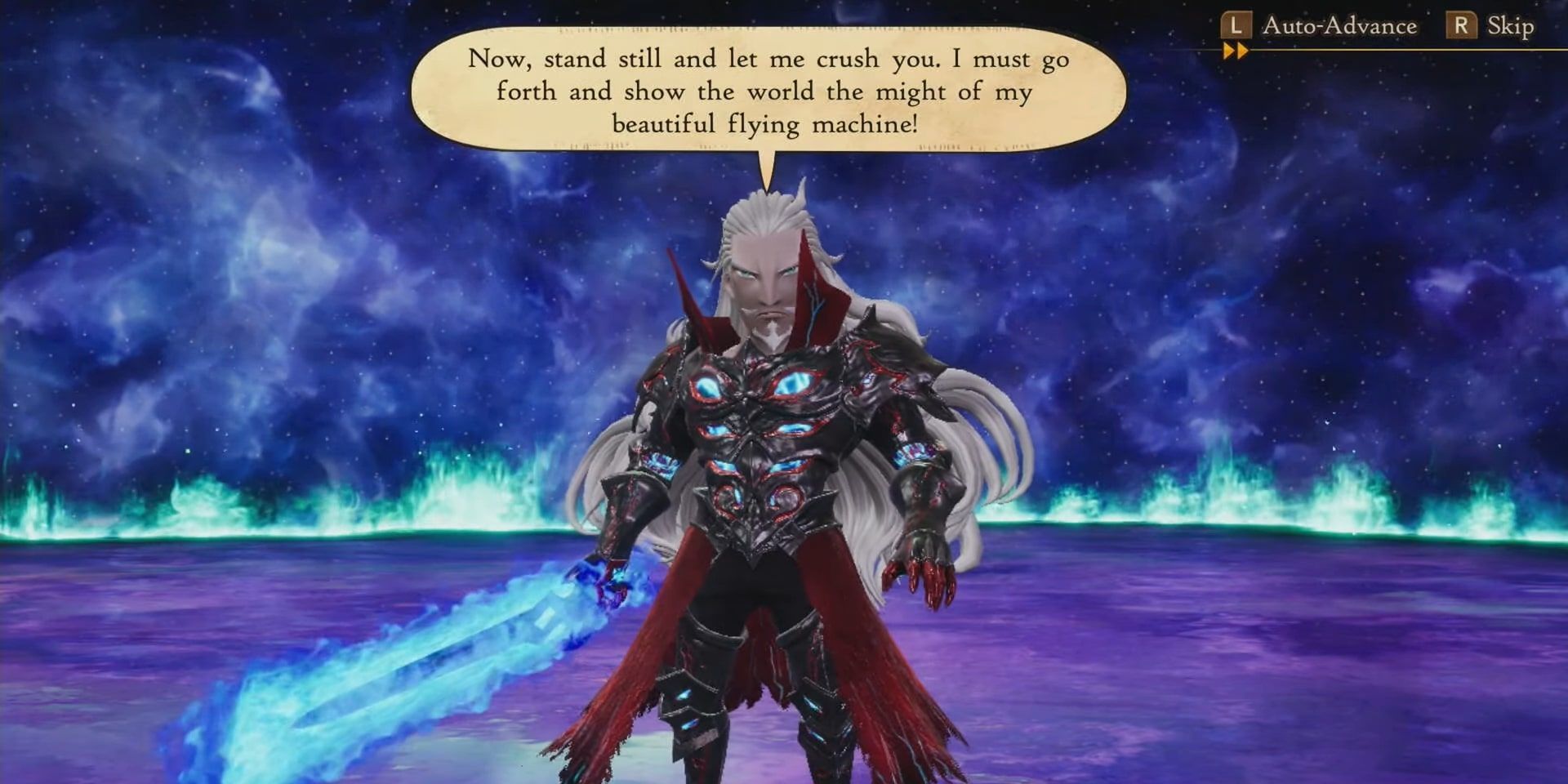 First things to note – Adam deals ridiculous damage. He's all about hitting someone really hard and hoping they fall down and die. The trade-off? Most of his attacks drain his health. The more he attacks, the more damage he takes.

This might seem like a great thing for the party, but he also has Minus Strike, which deals damage based on the difference between his current and max HP. As Adam gets closer to death, the more dangerous this attack becomes. It also breaks the damage cap, so he can, and will, nuke just about anyone he hits with this.

We can’t talk about Adam without talking about Deathstorm. This attack is only used when Adam is in critical condition, and when he uses it, he can wipe the entire party with relative ease. Making matters worse, Adam also gains 3 BP when he does this, meaning his following turn is going to be nasty indeed.

Ultima Blade is also a horrendously powerful ability that you simply don't want to deal with, but ultimately, will be forced to. It can deal huge damage, but, it can't break the damage cap like Minus Strike, which is a good thing.

As is fairly common, Adam has a few counters, namely Status Ailments and Defaulting. You don’t necessarily want to avoid using these systems, but be warned you might be in for a bit of pain if you overuse them. 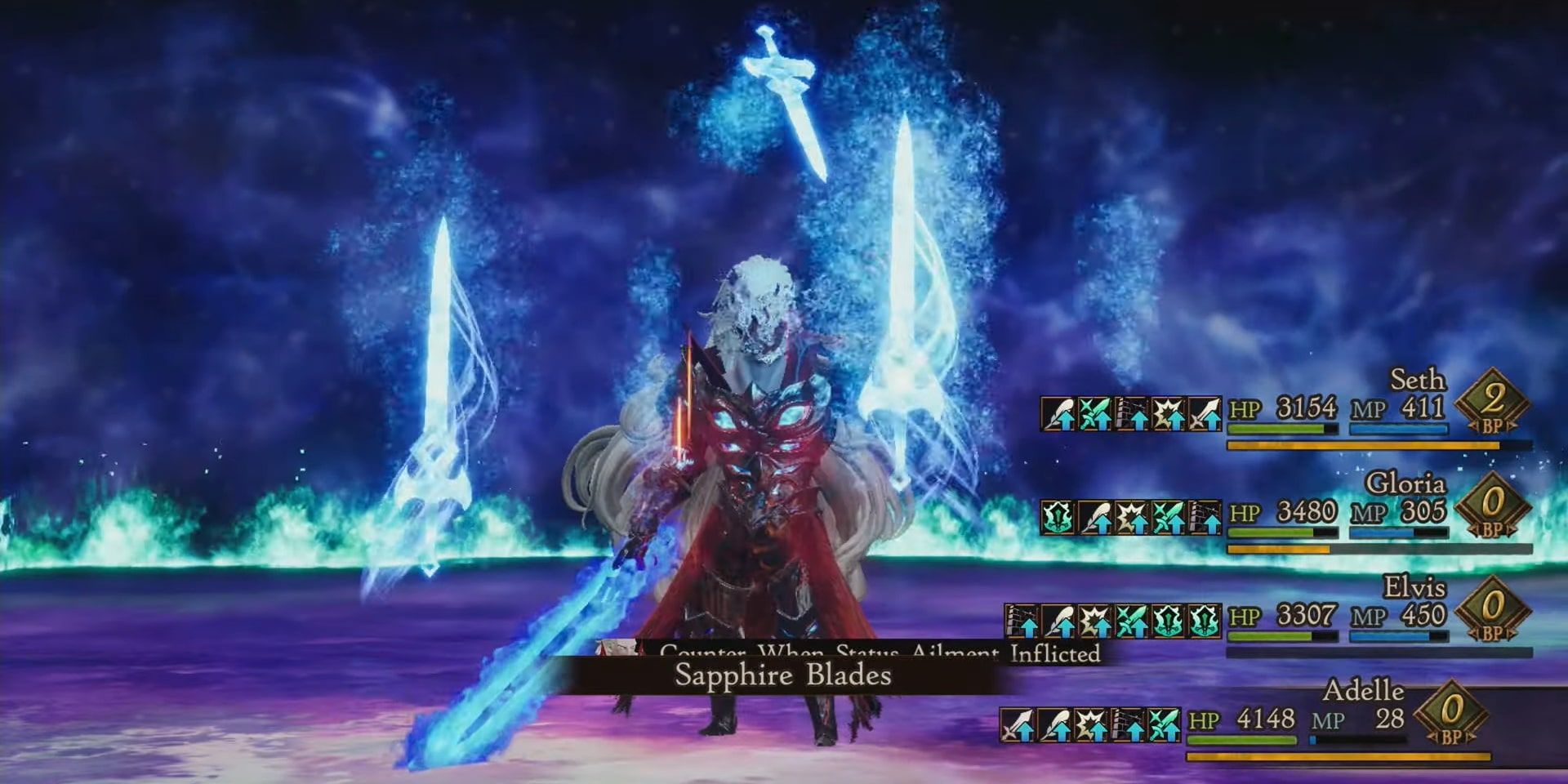 So how do you kill Adam? Well, you need to make sure you don’t die instantly first. His damage is high, and he is more than capable of taking out targets in a single attack – even at full HP. As a result, you want to have a big beefy tank absorb all of his nasty single target attacks.

Because all of Adam’s Attacks are single targets (Deathstorm being the only exception), you want to leverage the overwhelming power of the Shieldmaster. Defender of the People and defensive buffs will keep your party alive and kicking, giving your damage dealers time to do their thing.

Remember that Adam slowly kills himself throughout the battle, so spending turns healing or applying buffs isn’t going to hamper your offensive too much. Always be prepared for Minus Strike, however. Keeping Reraise up on your Shieldmaster, as a precaution, could save the attempt.

Before we go into damaging Adam, let’s tackle Deathstorm. He will use Deathstorm during this fight, and if you aren’t ready, you will lose. The trick is to let him use it only once. The best way to counter it is, like with everything else, a Shieldmaster doing what they do best. Throw out Defender of the People, make sure you are nice and buffed and take all 10 hits on one person. Easy.

Like with Minus Strike, you might want to apply Reraise to your Shieldmaster. If you want to be extra cautious – apply it to the whole party.

When it comes to killing Adam, you have two routes you can go down for maximum efficacy. Firstly, hit him with high-damage Axe attacks over, and over again. This is the easiest to set up, level for, and output. Grab a big hatchet, and start taking chunks.

Because Adam doesn’t have the most all-encompassing resistance profile, he is susceptible to nearly all weapons and most magic. Bringing something like a Phantom along, or a Red Mage to deal heavy damage to Adam is more than viable when it comes to taking him out.

Phantom’s in particular can do some serious work in this fight with a combination of the Poison status ailment, Rippers and the Milk Poison ability. A high-ranking Phantom has a 100 percent chance to apply ailments, Milk Poison deals massive damage to poisoned targets, and Ripper deals increased damage to humanoids. It’s a match made in heaven.

The only downside to the Phantom strategy is that Adam counters ailments. This is hardly an issue in the grand scheme – just make sure to have your Shieldmaster primed and ready to go. As is always the case, the Adam fight is all about preparation. Bring a tank, bring a big stick, and you should be golden. 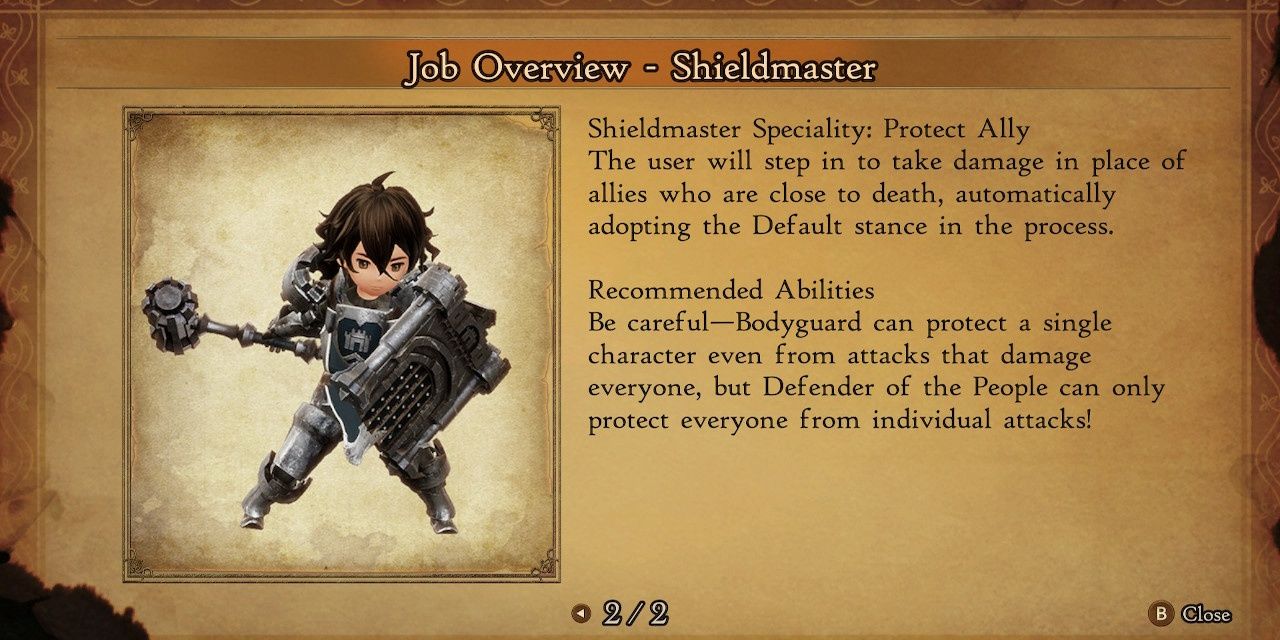 As you might have guessed, you absolutely want to take a Shieldmaster in this fight. Out of all the classes in Bravely Default 2, this one is the MUST TAKE. Defender of the People and some buffs will effectively shut Adam down, and allow your team to do the rest.

Outside of Shieldmaster, you can go any direction you want. Barbarians can do work with their axes, a Phantom with dual-Rippers can tear through him, and a Red Mage chain-spelling is always a solid go-to.

Finally, you'll want a healer. White Mage is always a solid option here, although you could also just use a Red Mage since most incoming damage will be landing on one party member. A Spiritmaster with Reraise is also recommended.

Remember you can take Sub Jobs in Bravely Default, so mixing and matching a White Mage with a Spiritmaster can net you some powerful abilities.