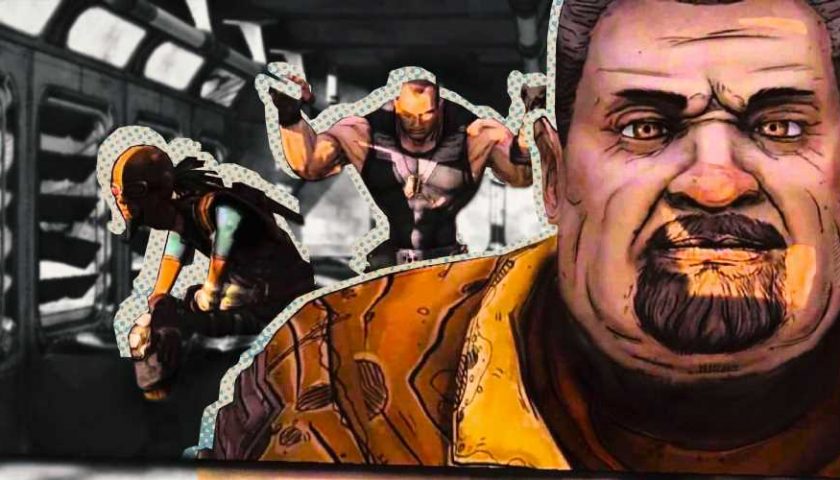 I don't think my most controversial video game take should be that controversial, but it is. I'm a video game journalist, so you know I have some bad takes in this broken down serotonin factory I call a brain, but here's one opinion that receives universal pushback: I don't like video game music. But what about This Orchestra Thing in This JRPG Thing when This Twink Thing fights This Demon Thing with This Sword Thing? Yeah, terrible. Put some Taylor Swift on and get a life. There are some video game bops I can get down with when they're actively in the game, operating as designed, but the thought of opening up Spotify and throwing on some jams from Sonic the Hedgehog makes me feel nauseous. This is why I've always loved games that use real music in their soundtracks, and why I adore the opening to Borderlands.

Whoa whoa whoa, hold up there, buster. 'Real' music? Aren't you devaluing a whole art form there? Sure, I guess. Clearly composers and musicians in video games are beloved, and even if I wouldn't listen out of context, they're a crucial part of the overall dish. I don't eat raw flour but I like apple pie. Composers should be well paid, protected, and given a union. Don't treat them like Mick Gordon. But when I say 'real' music, you all know what I mean. Songs that already exist in the real world, that are woven into the video game rather than existing because of it.

Games like Persona, which record typical pop songs within the game's reality, get a bit of a pass, but there's still the sense that it's video game music. A strange, barely perceptible film over the top of it, coating it with something sour. But my favourite video game music will always be the Tony Hawk's soundtrack or the FIFA soundtrack – just actual songs I already know and like applied to a video game. But for one-off use of music in a video game, Borderlands’ first scene remains king. Borderlands opens with Marcus Kincaid, one of the game's grizzled merchants, narrating an introduction to Pandora and the idea of Vault Hunters, setting up the game's central premise. We then move to a blindingly bright sun, panning down to a dry desert canyon while some dirty blues rock chords play. A sign for Pandora is falling apart. A strange and spiky creature crawls out from the wreckage, a sign that this planet is dangerous and barren. It wanders into the road, and is instantly run over by a passing bus. Ain't No Rest For The Wicked kicks up a notch. Borderlands has arrived.

In the bus, we see Marcus driving and the four player characters riding along behind him, the music dipping out for a moment for an exchange between them. Then as each character is introduced with a name splash and example of their abilities, Cage the Elephant roars back, and the camera moves outside of the bus as BORDERLANDS appears on screen in giant letters. With a jolt, that same strange creature is dislodged from the bus' front grill and rolls recklessly towards the camera, where it splatters as "until we close our eyes for good…" drones out of Cage the Elephant frontman Matt Shultz's larynx.

Games love to be labelled 'cinematic' and crib the storytelling conventions of movies in order to soak up the prestige of film, but they're afraid to truly borrow from it. The use of modern music recognisable to the average player, the character names and roles appearing on screen in stylised credits, the playful use of the camera, the title appearing on the screen as a natural part of the scenery – all of these are presentation techniques we associate far more with movies than we do with video games, and yet the games that desire more than anything to be compared to a film are afraid to use them, because they come across as too playful and silly. 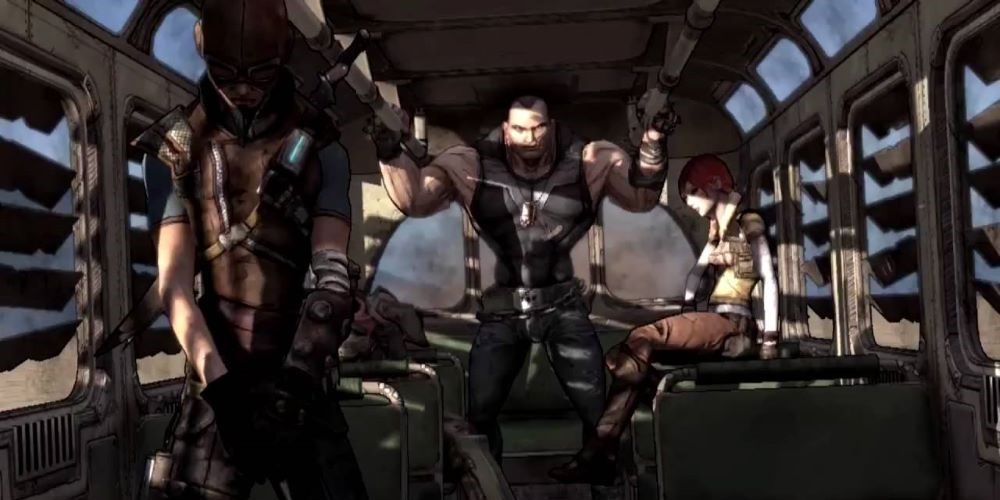 Borderlands' opening isn't just impressive because it looks like a movie though. With just a few seconds on screen each, and no dialogue, the four main characters instantly become known to us. We see their personality and their approach to the coming battles without the need for flashbacks, long speeches, or any other belabouring of the point. More than just the characters though, the game itself tells us who it is.

Marcus' voiceover might set up what's going on, but Borderlands is very generic at its basest level. Shoot things, find treasure. It's the charisma of the game that makes it, and from the whining punk tones of Cage the Elephant, to the slapstick splatter of the critter against our camera, the opening is always effortlessly Borderlands. Possibly because Borderlands is viewed as a few steps below the greats in the video game pantheon, the opening never seems to get anything close to the respect it deserves. After a decade of games endlessly trying to be movies, nothing has come as close to capturing the magic of cinema as the first scene from Borderlands.