Bloodstained: Ritual of the Night has hit a million copies sold, a significant milestone for the Kickstarted title that had plenty of turbulent waves to navigate as it went through development. Now, Koji Igarashi has revealed some big additions coming as we head through 2020. The graphic below lays things out in an easy to digest format. 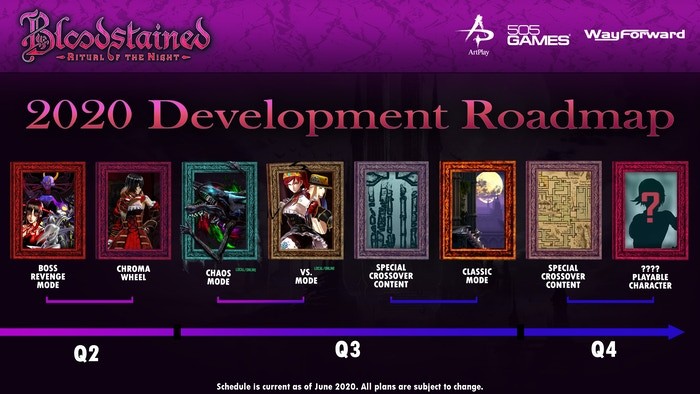 In Q2, players get boss revenge mode, where you can play as the bosses and smash heroes, as well as a ton of customization options in the form of the Chroma wheel.

Q3 brings a bevvy of boons. VS mode allows you to battle other players, a boss rush mode for up to 2 players co-op, and “classic” mode. Classic mode is described as “It’s Bloodstained 80s-style as Miriam faces off against a series of sub-bosses laid out across five harrowing stages and three difficulty levels.”

Q4 has a big addition – a third playable character!

As noted in the Kickstarter update, timing is always subject to change with the variable state of the world and development. Still, exciting things on the horizon for Bloodstained fans!