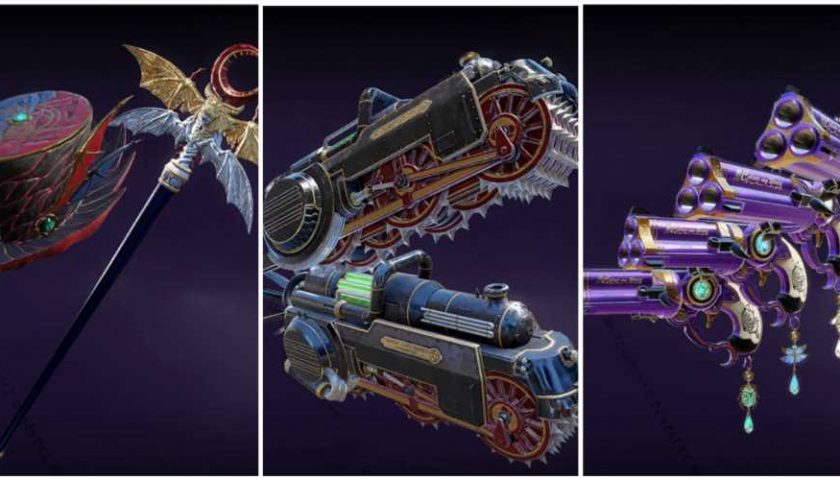 Bayonetta 3 packs all the style and action of its predecessors into one neat package, but it also brings along another series staple: Bayonetta's wide variety of powerful, and often strange, weaponry. Each weapon is unique and packs its own arsenal of attacks, combos, and Demon Masquerade transformations.

Given the sheer number of them, about a dozen in total, deciding on which two weapons to bring you with into fights can be tricky. Whether you're just trying to get by or shooting for those Pure Platinum medals, this list will help you decide which weapons in Bayonetta 3 are worth bringing with you. 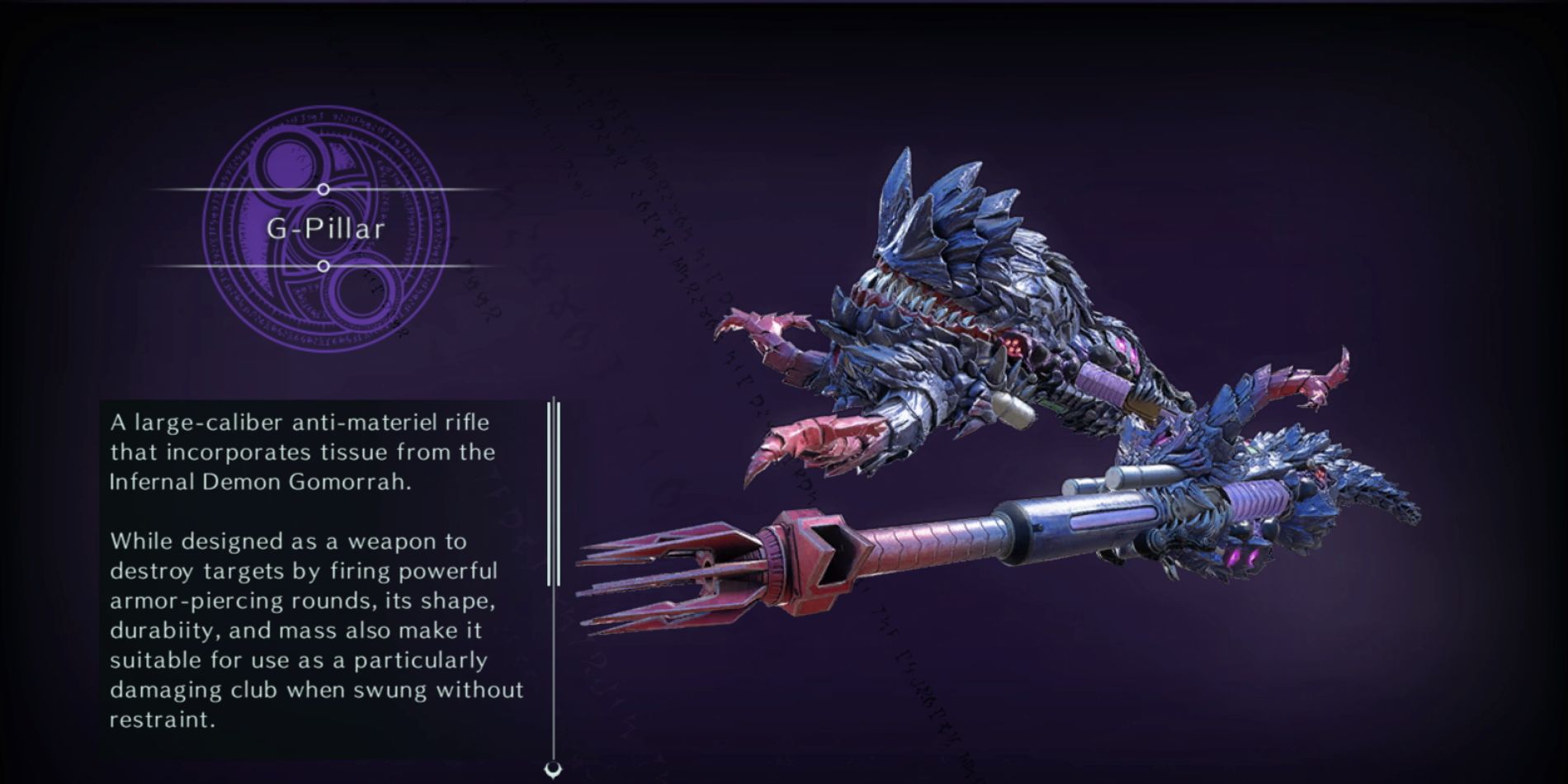 Gained from her contract with Gomorrah, G-Pillar takes the form of a massive anti-material rifle that doubles as a club. Its attacks are slow but incredibly powerful, and can be augmented with a quick, devastating shot from the rifle. The Demon Masquerade unleashes Bayonetta's inner wolf with large, powerful swipes.

G-Pillar's main weakness is its slow speed, which makes it difficult to get off longer combos. Of any weapon, it's probably the one that benefits the most from dodge offsetting. You'll find using it to be well worth the effort, though. What few attacks you can get off are so powerful that the speed hardly matters. 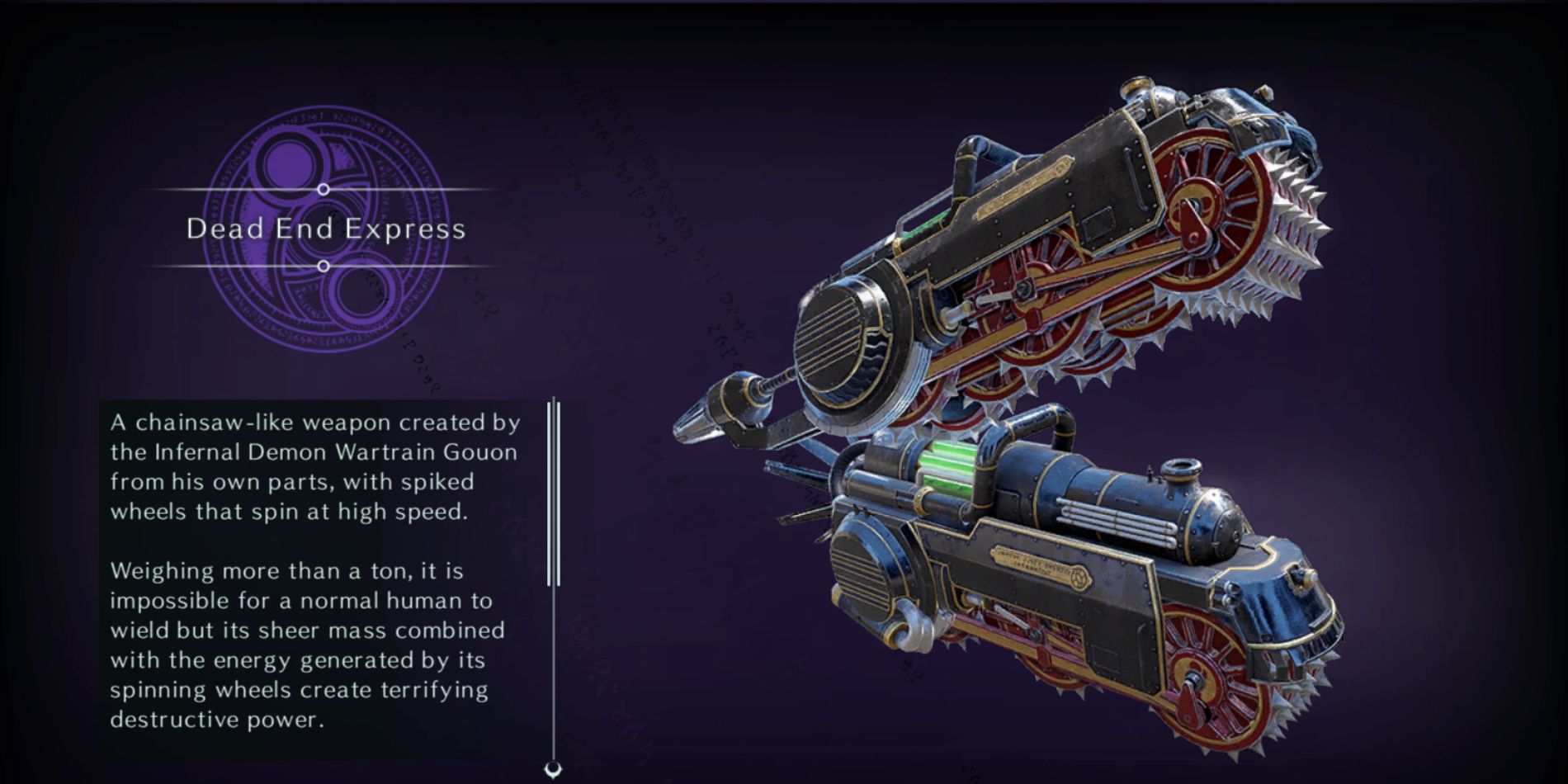 After taking control of Wartrain Gouon, Bayonetta gains access to this incredibly powerful chainsaw-like weapon. It attacks with slow, deadly multi-hitting attacks that can be revved up to increase their power. It can shoot out buzzsaws as projectiles, and its Demon Masquerade sees Bayonetta's lower half transforming into a train cabin.

Like G-Pillar, Dead End Express is a slow but incredibly powerful weapon. It can be made even slower and more deadly by taking the time to rev up its attacks, which is risky, but will reward you with some of the single most powerful attacks in the game. Plus, it's just a good time to use. 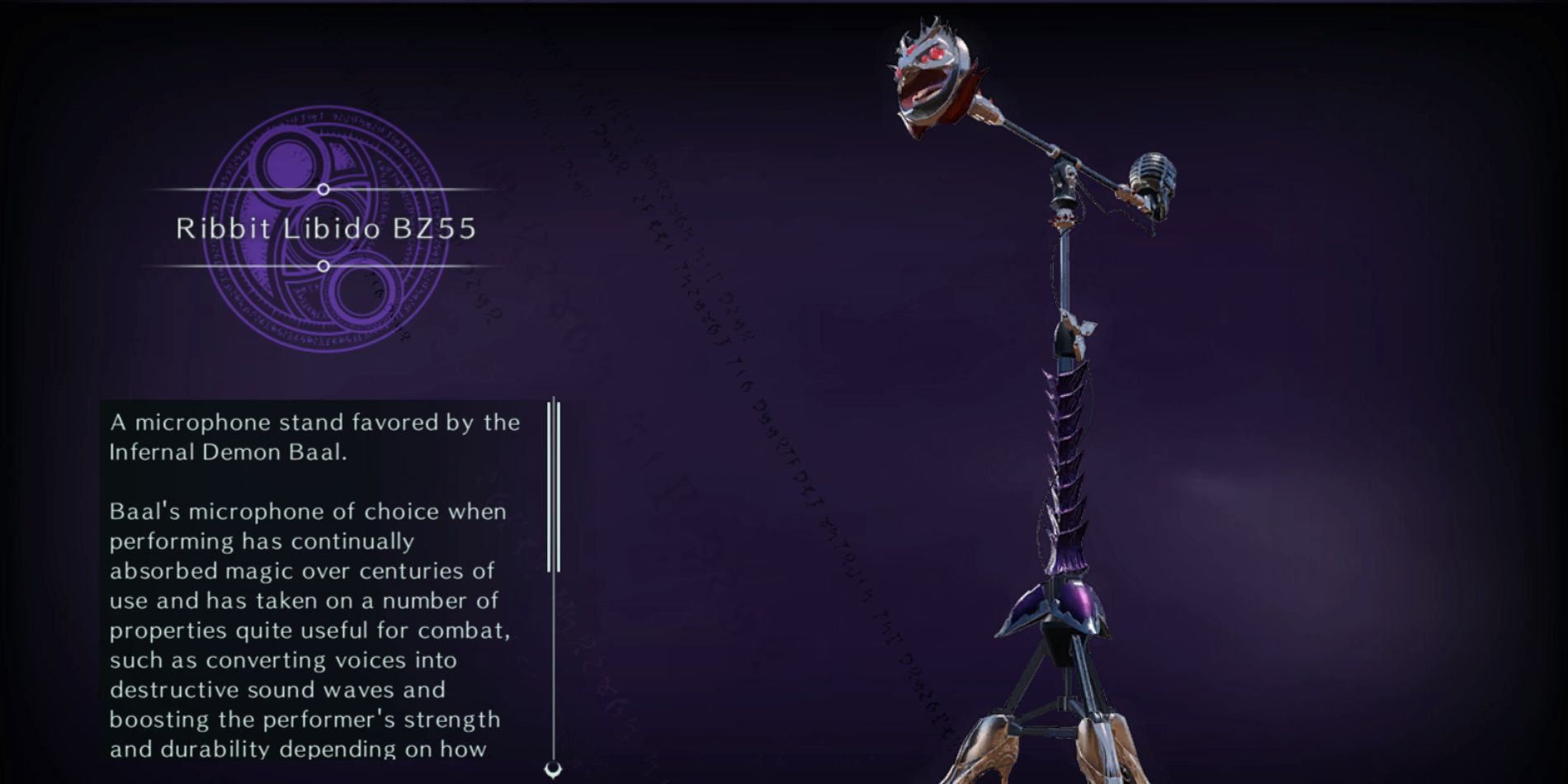 After meeting with the demonic songstress frog Baal, Bayonetta rather appropriately gains access to this weapon. It takes the form of a microphone stand that Bayonetta creatively swings around as if it were a spear. By holding the attack button, Bayonetta can initiate a solo that gives her buffs.

This weapon's wide-reaching and quick attacks give it general utility in most fights. It's not the most damaging weapon, but it's a relatively safe one. Its unique mechanic can be tricky to use, since you'll need time in the middle of fights to sing. Get it off, though, and you'll be rewarded with some pretty powerful buffs. 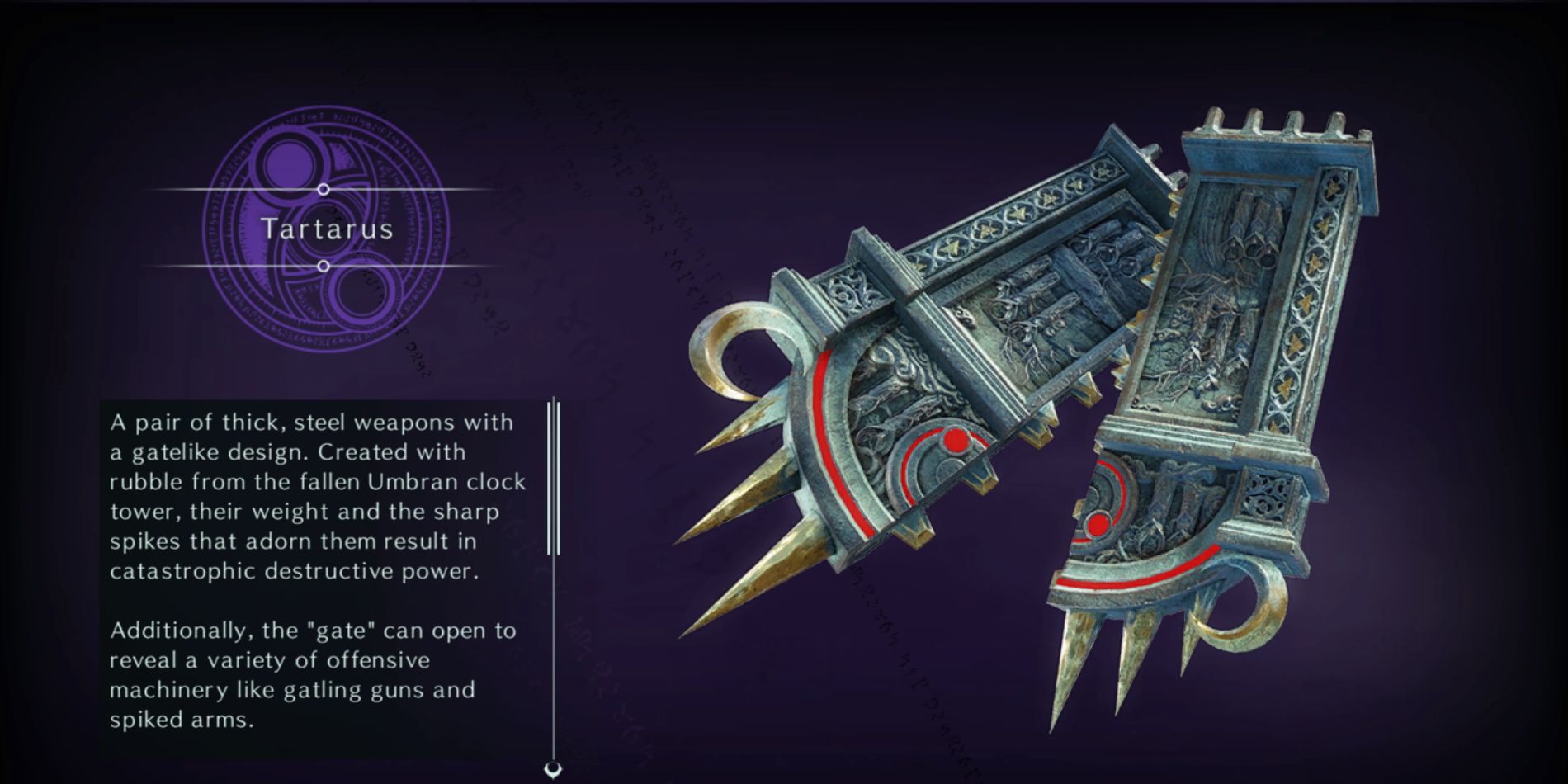 As strange as the Umbran Clock Tower demon is, its weapon is surprisingly conventional. Tartarus is a pair of massive gauntlets that allow Bayonetta to unleash devastating blows. She can hold the attack button to charge after distant opponents, shoot them with inner machine guns, and transform into a marionette-like demon.

The Tartarus is multi-faceted and has tools for most situations. Its strongest attacks can power right through certain attacks from enemies, and its machine guns are some of the best ranged weapons in the game. Its only weakness is that its regular attacks are a bit on the slower side. 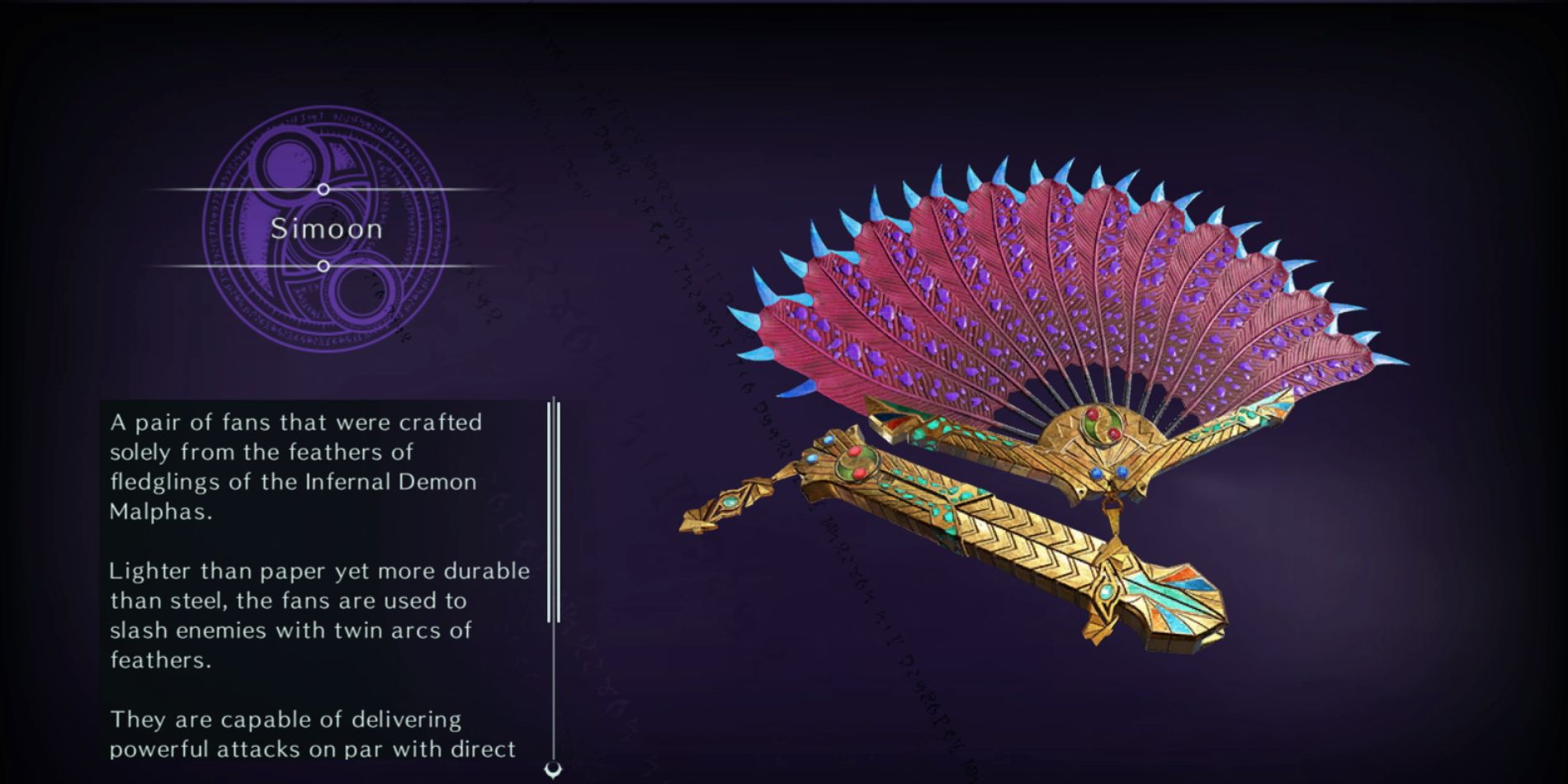 After signing with the bird demon Malphas, Bayonetta will be able to use the dual fans called Simoon. This weapon is incredibly fast, among the fastest in her arsenal, and has several attacks with great area-of-effect. Its Demon Masquerade turns Bayonetta into a harpy and allows her to glide for extended distances.

Simoon is far from Bayonetta's strongest weapon in pure damage output, but its sheer speed makes it great for trickier demons. You can fit in multiple attacks in risky situations and squeeze in every bit of damage you wouldn't get with a slower weapon. 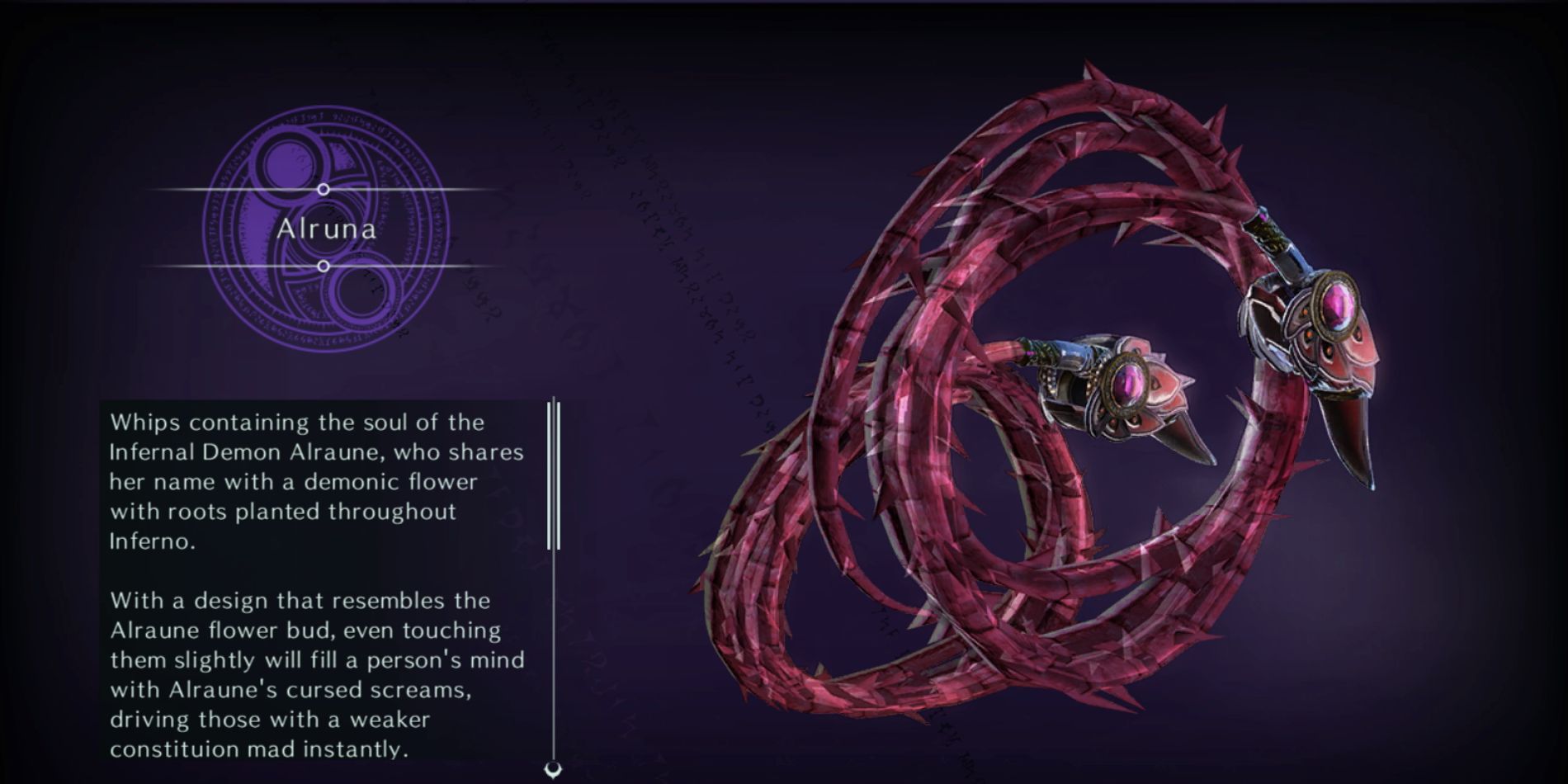 This secret weapon can only be obtained with the Phenomenal Remnant you'll find after getting every Umbran Tear of Blood in chapter three. Alruna is a spiked whip that boasts both range and speed, at the cost of a bit of damage. If you played Bayonetta 2, you will remember this one.

Alruna has incredible area-of-effect, which makes it one of the best weapons in your arsenal for dealing with multiple foes. It can entangle enemies in thorny vines to ensnare them, and its great range makes it a safe option in most fights. You really can't go wrong with Alruna, assuming you can find it first. 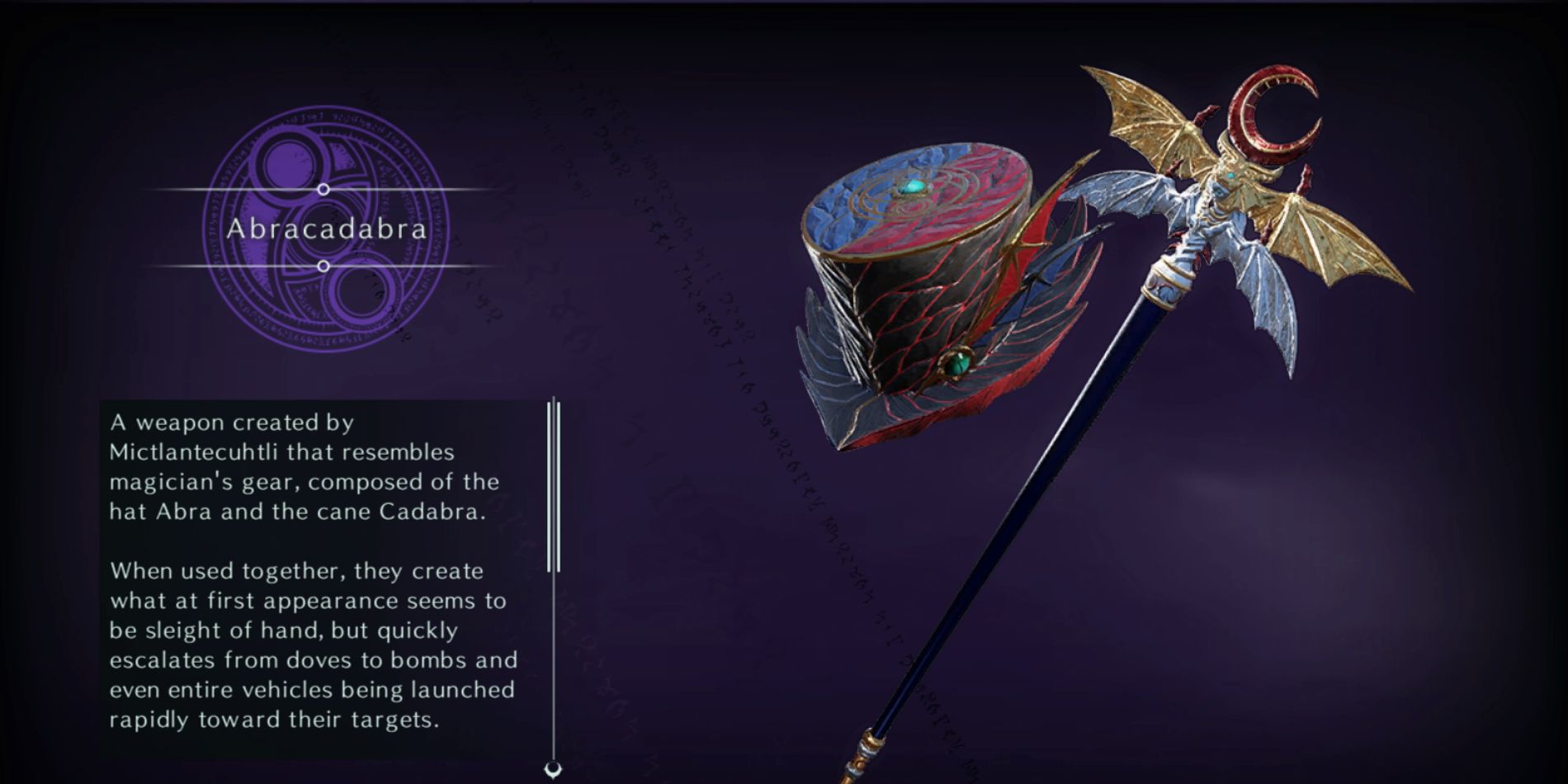 Obtained from the bat demon Mictlantecuhtli, Abracadabra is almost exactly what it says on the tin. It allows Bayonetta to take on the form of a magician, rather than a witch, using a hat and cane in tandem to attack foes from afar with summoned doves and bombs out of nowhere.

Beyond its sheer absurdity, Abracadabra is a great weapon that affords Bayonetta a lot of range and crowd-control without skimping out on damage. Some of its attacks are on the slower side, but being able to pelt your foes with bombs literally pulled out of a hat is too great to pass up. 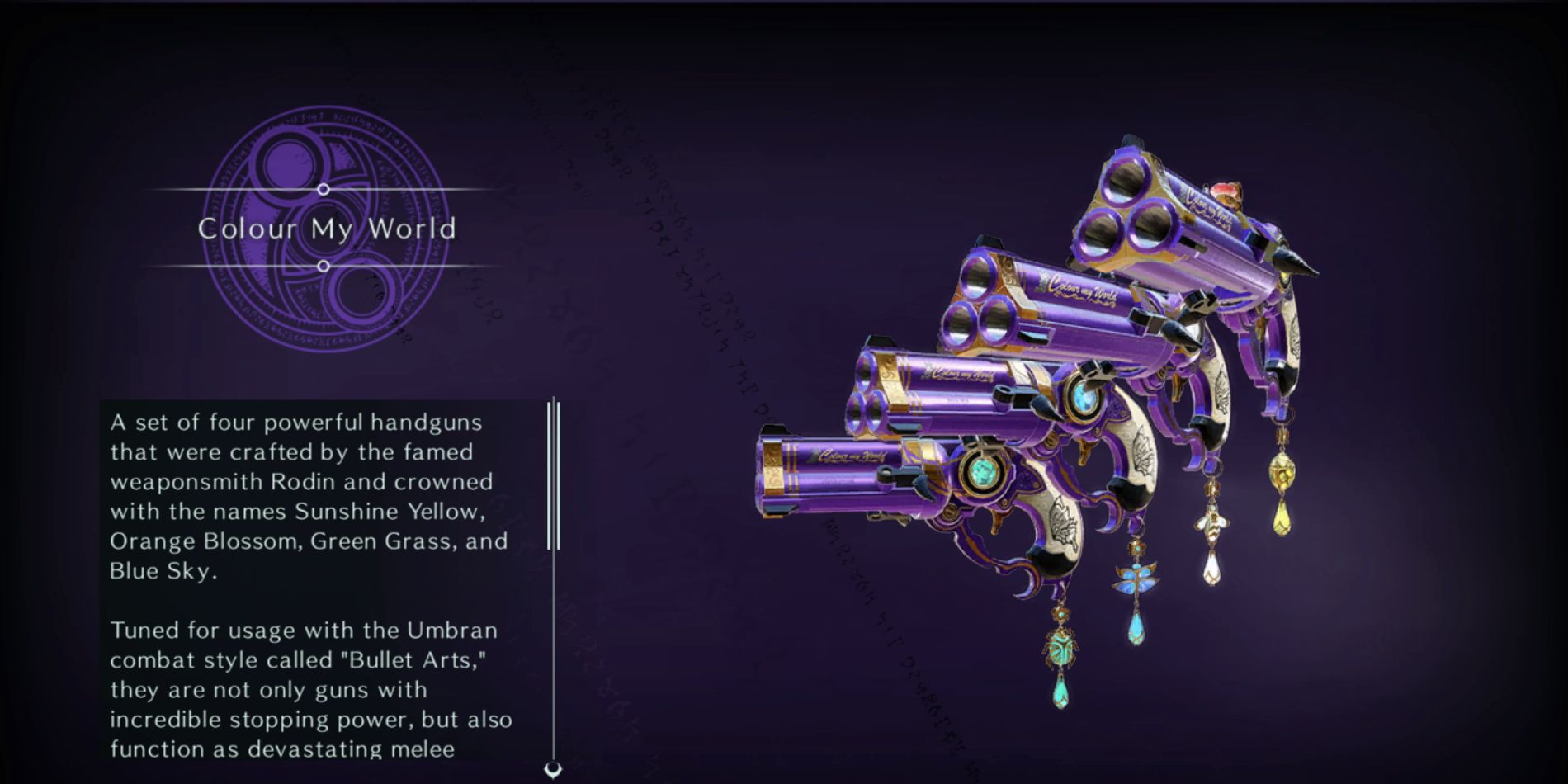 Colour My World is the simplest weapon, but that definitely doesn't mean it's not among the deadliest. It's an all-rounder in many regards, but that just means it's perfectly suited for a variety of different fights. Whether you're shooting enemies from afar or assailing them with strikes, it's rarely a bad option. 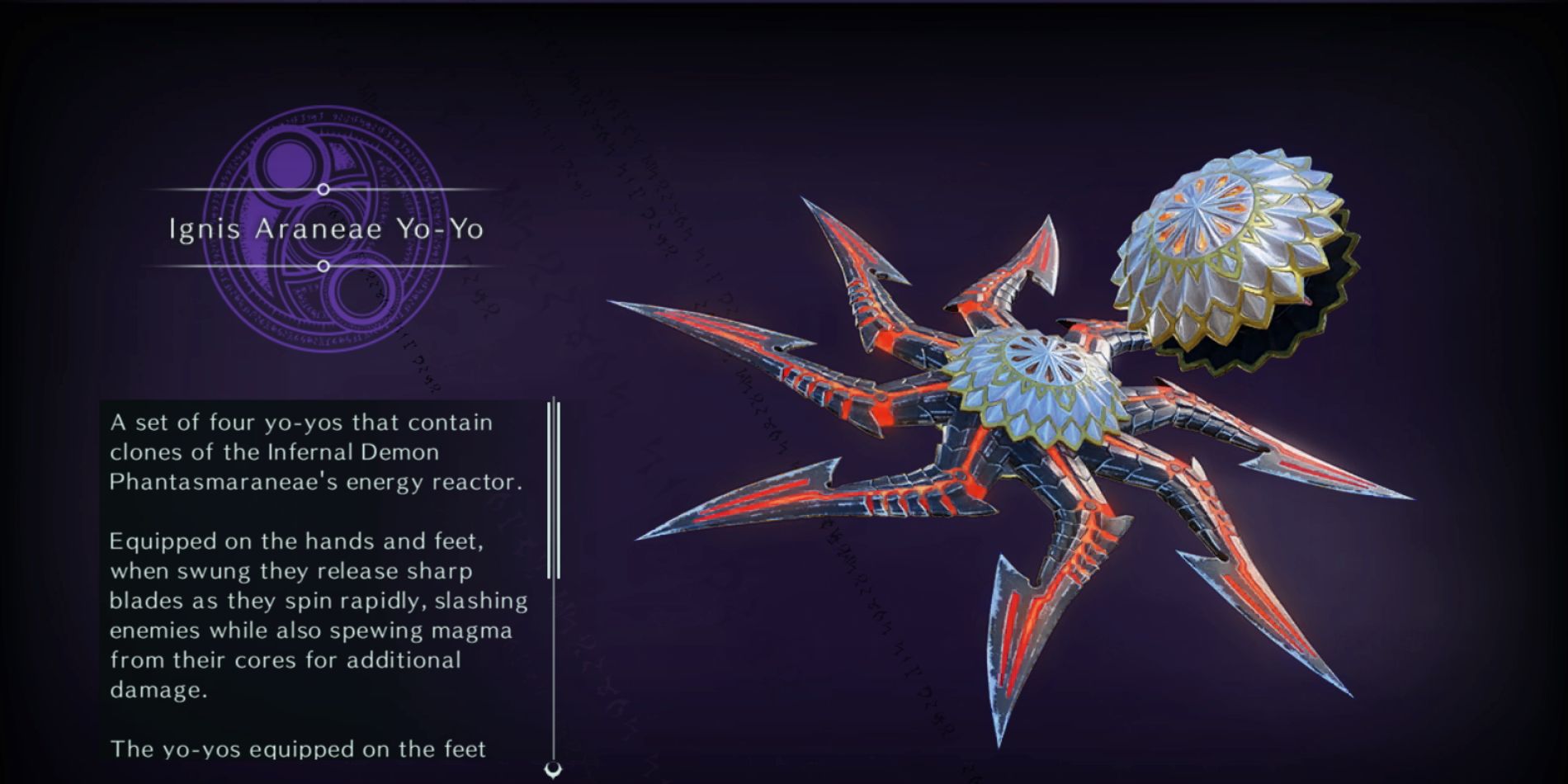 Among the weapons in Bayonetta 3, new and old, the Ignis Araneae Yo-Yo stands out thanks to its speed, great damage, and long range. After sealing the deal with the spider demon Phantasmaraneae, Bayonetta will gain access to this pair of twin yo-yos and its Demon Masquerade that assumes the form of a spider.

The yo-yos have fantastic range thanks to Bayonetta's ability to throw them out on a string, and their slowing webbing projectiles are among the best in the game. Their combos are all great, and made even better by your ability to spin the yo-yos to extend them. Its Demon Masquerade allows Bayonetta to climb on walls, which is hugely useful in a variety of situations.