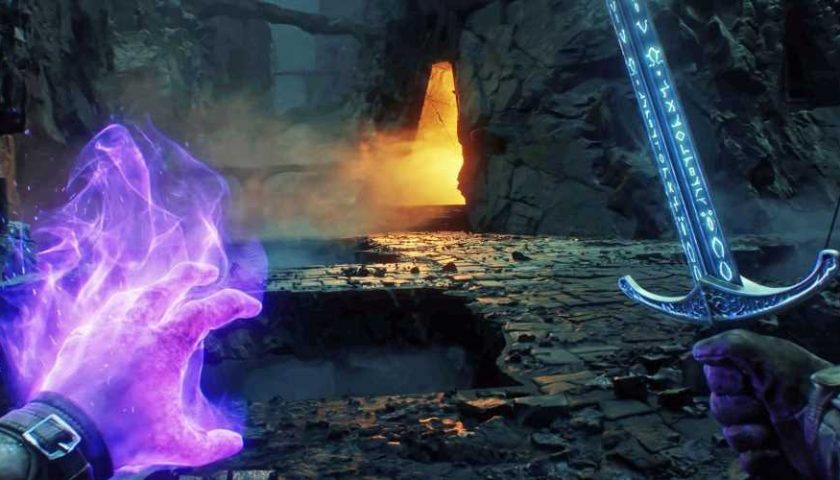 Windows Central reporter Jez Corden shared his early Avowed impressions on Twitter, and seemed to reveal more than intended. What started as a simple discussion has resulted in Corden leaking the game's very first screenshot online. The reporter quickly deleted the picture, replacing the original image with its blurred version, but the leak already made it to Reddit and beyond.

In the screenshot, Avowed looks pretty much like you would expect from a first-person fantasy RPG. Dense vegetation and some kind of ruins in the middle of a small lake can be seen, as well as blue magic spells at the fingertips of the nameless hero. Sadly, the quality of the original image leaves much to be desired, so it's hard to guess how impressive the real graphics of the final product might look.

While we can't guarantee the leaked image is indeed from the pre-alpha version of Avowed, it seemed rather convincing and is definitely in line with Obsidian's own presentation from 2020. "Think people are gonna be impressed with Avowed," Corden wrote, adding the studio has changed up the team significantly since the official reveal, resulting in a "better pace of speed and a better vision" for the project. In his words, the vertical slice of the game came a lot more quickly under the new creative direction, so it seems the development carries on rather well.

Corden said Avowed is expected to be "pretty integrated into pillars" world, as at least part of it is set in the living lands of Eora. Fans should expect even more similarities between the upcoming RPG and Pillars of Eternity games. Not only are players rumored to be able to wield bows and swords or cast spells in Avowed, there are also different firearms like muskets and pistols available.

We still have no idea when Obsidian will be ready to finally show Avowed to the public. There's still a chance the project might emerge this year during The Game Awards this December.