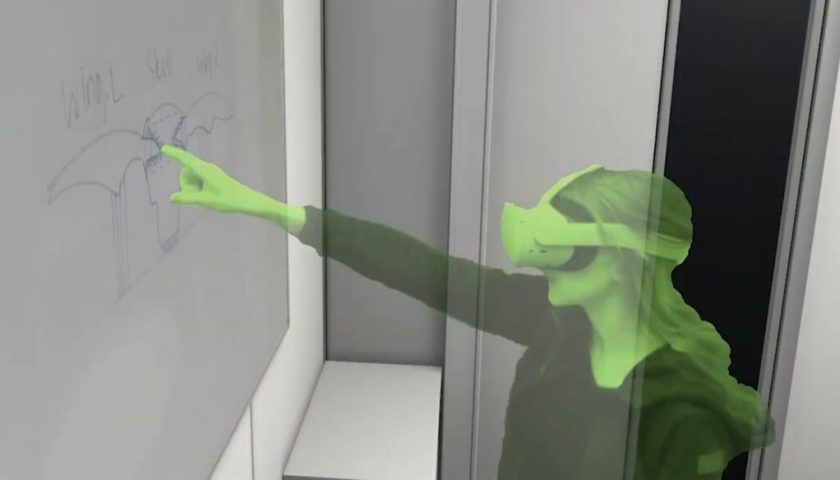 Video game designers often make objects in the environment glow or stand out to let players know what’s interactable. Could the same idea be applied to the physical world to show you interesting moments from the past?

New research from the Sensing, Interaction & Perception Lab at ETH Zürich in Switzerland conceptualizes a work day with “Causality-preserving Asynchronous Reality“.  The idea shows how environments laden with depth sensors could allow collaborators to annotate objects in the physical environment, essentially leaving messages for their colleagues to pick up in the future. The effect shifts time like the answering machines of the last century but places messages in context of the physical environment in which they were made, much like the holographic recordings shown throughout the Horizon Zero Dawn games.

Researchers Andreas Rene Fender and Christian Holz explored the idea in a paper presented as part of the CHI human-computer interaction conference a few weeks ago in New Orleans. Holz was able to join our virtual studio to walk us through the research which he summarizes at the start of the video embedded below.

“We’re co-located but at different points in time, so it’s the same here but a different now,” explained Holz, assistant professor in computer science at ETH Zurich. “We can make sense of events as they happen in the shared environment.”

The work raises interesting questions around acclimatization to new forms of interpersonal communication that might be more common in the years to come. Will people really walk into a room and leave a message for someone who is so focused on their virtual environment they can’t be bothered? Employers everywhere are still establishing policies in response to employees asking to work remotely, with some companies like Apple, Google, and Meta working on headsets and services to move beyond video chat grids and power new paradigms in communication. Put another way, the workplace is changing and while “Asynchronous Reality” might not represent the exact way offices extend between physical locations in the future, this research still might give us an idea of what’s in store.

“We can take a piece of the office home and be co-located,” explained Holz. “I think technical feasibility is going to be there probably much sooner than the point at time at which we figured out what’s actually desirable.”