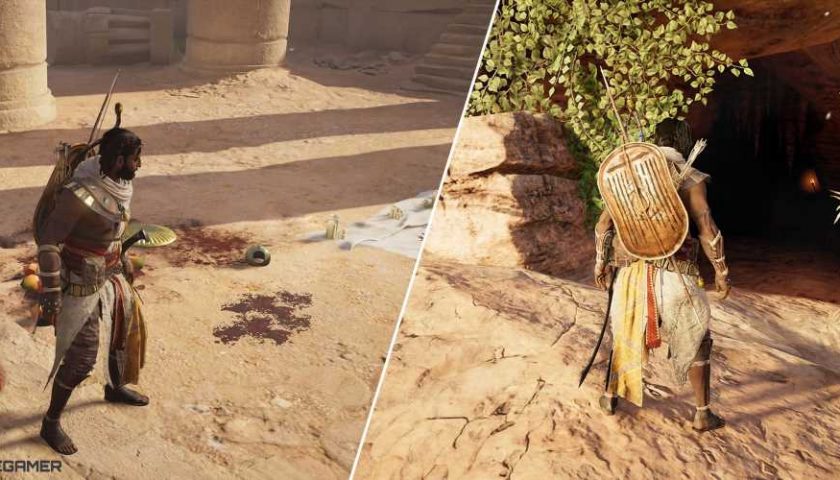 Taste of Her Sting is a level 17 side quest in Assassin's Creed Origins. In this side quest, you will investigate a series of ritual sacrifices across Egypt, all marked by a Scorpion, the symbol of the goddess Serqet. Throughout the quest, you will have to investigate four locations where these rituals took place.

Finding all four of these locations can be difficult, as the game gives you no clues as to where to go next. You will most likely come across these as you explore the world, but if you're looking to knock out this quest all at once, we've got you covered. Below, you can find how to start the Taste of Her Sting side quest, and the location of each ritual site.

How To Start The Taste Of Her Sting Quest 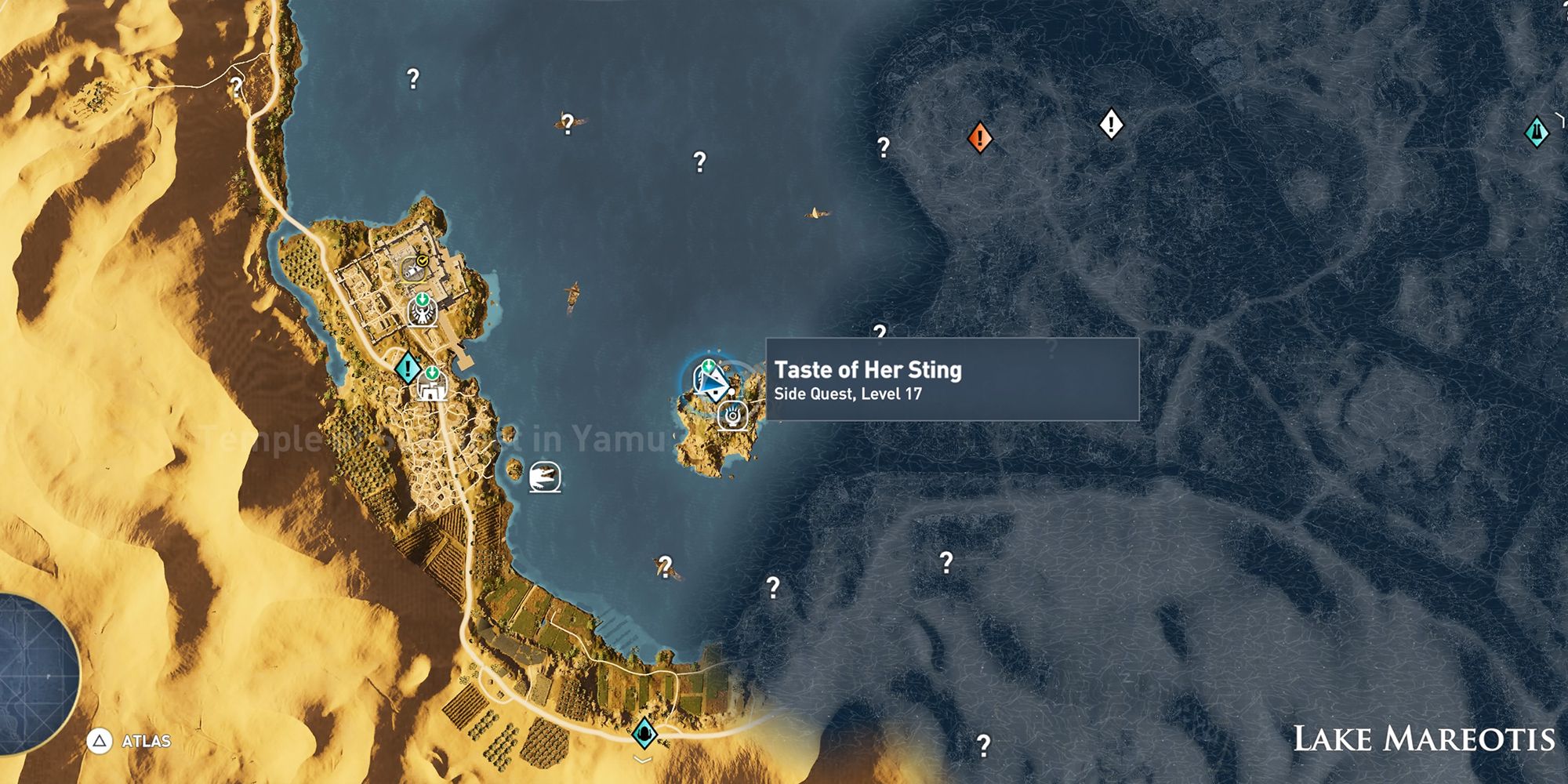 Unlike most other quests, Taste of Her Sting must be discovered by going to the relevant location first. To start this quest, head to the Lost Crypt in the southern part of Lake Mareotis, and look for the bloody ritual site. You can get here using a boat from the shore nearby. Bayek will comment about this area's state, and the quest will begin. 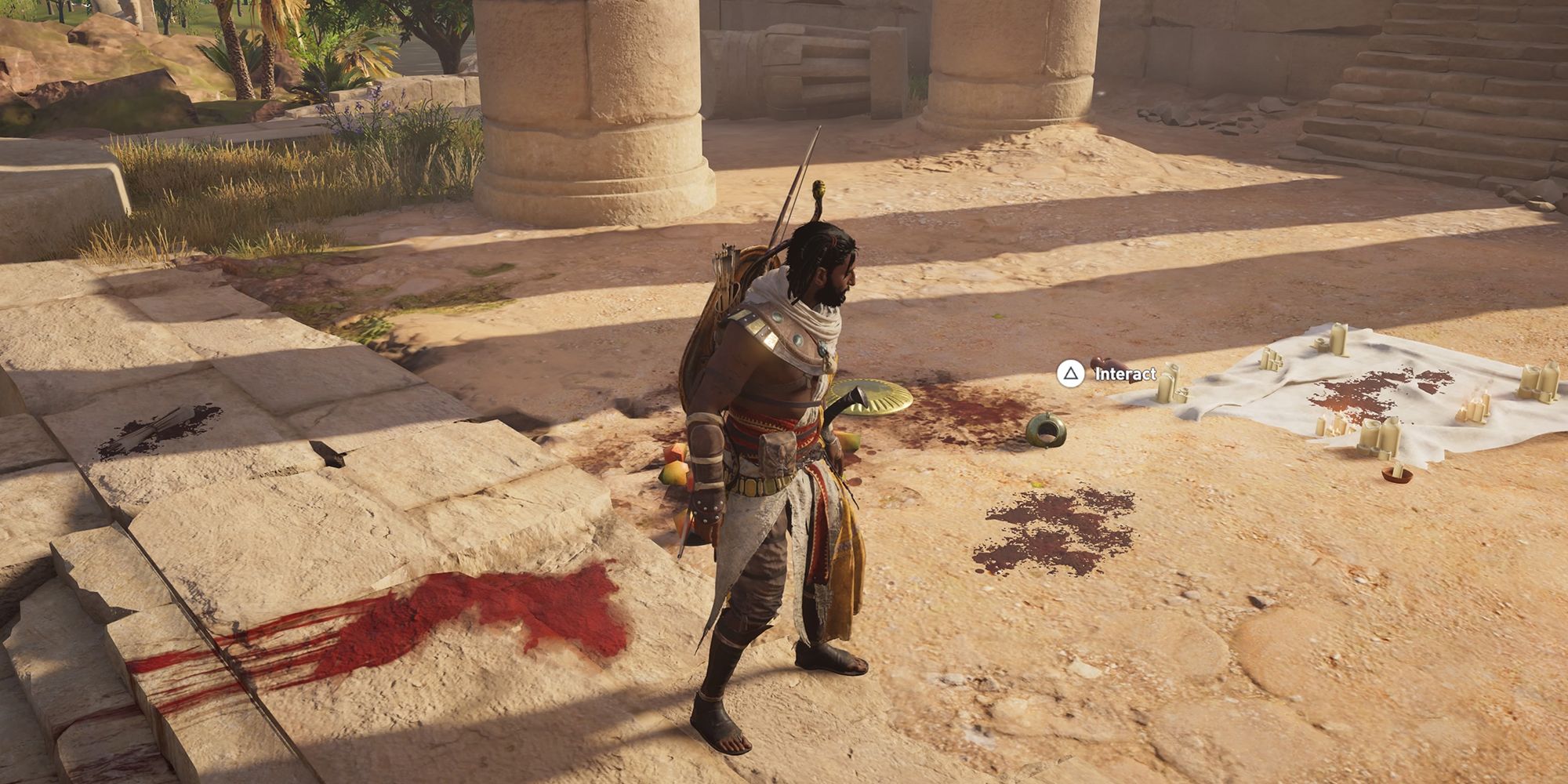 The location of the first ritual site to investigate is the same area where you begin this quest. In this area, you will need to find five clues. Be sure to utilize the Animus Pulse to highlight nearby investigatable objects with an orange quest marker. The objects you must investigate are detailed below.

After investigating these five objects, the area will be complete, and you will have to discover three other ritual sites to investigate. These can be completed in any order, but we've listed them in the most accessible way. 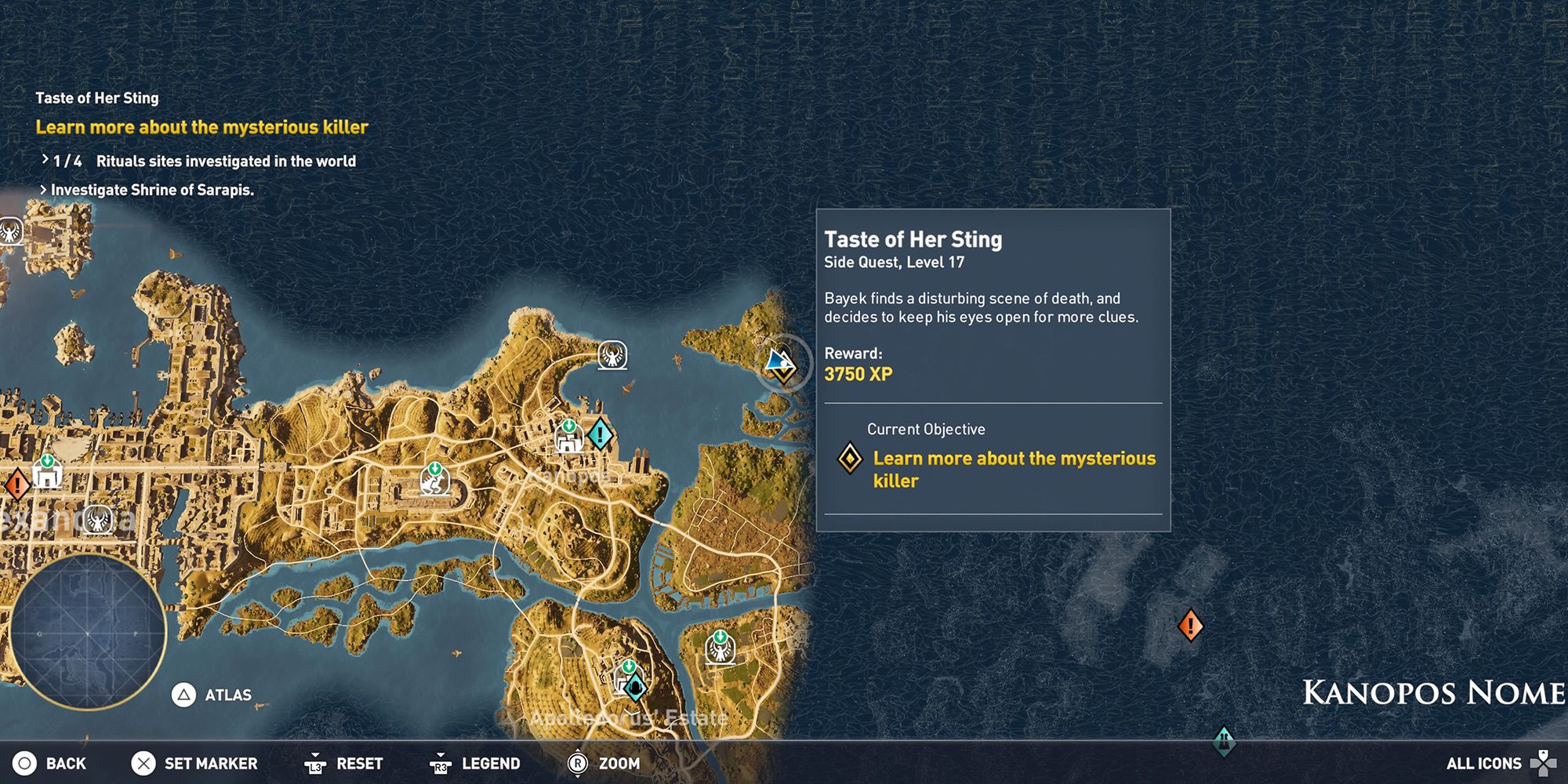 The second ritual site is found at the Shrine of Serapis in Kanopos Nome, in the northeast corner of the area. After arriving here, you will need to investigate the following five objects.

If there are enemies in the area, like crocodiles or bandits, when you arrive, be sure to kill them first before returning to your investigation. 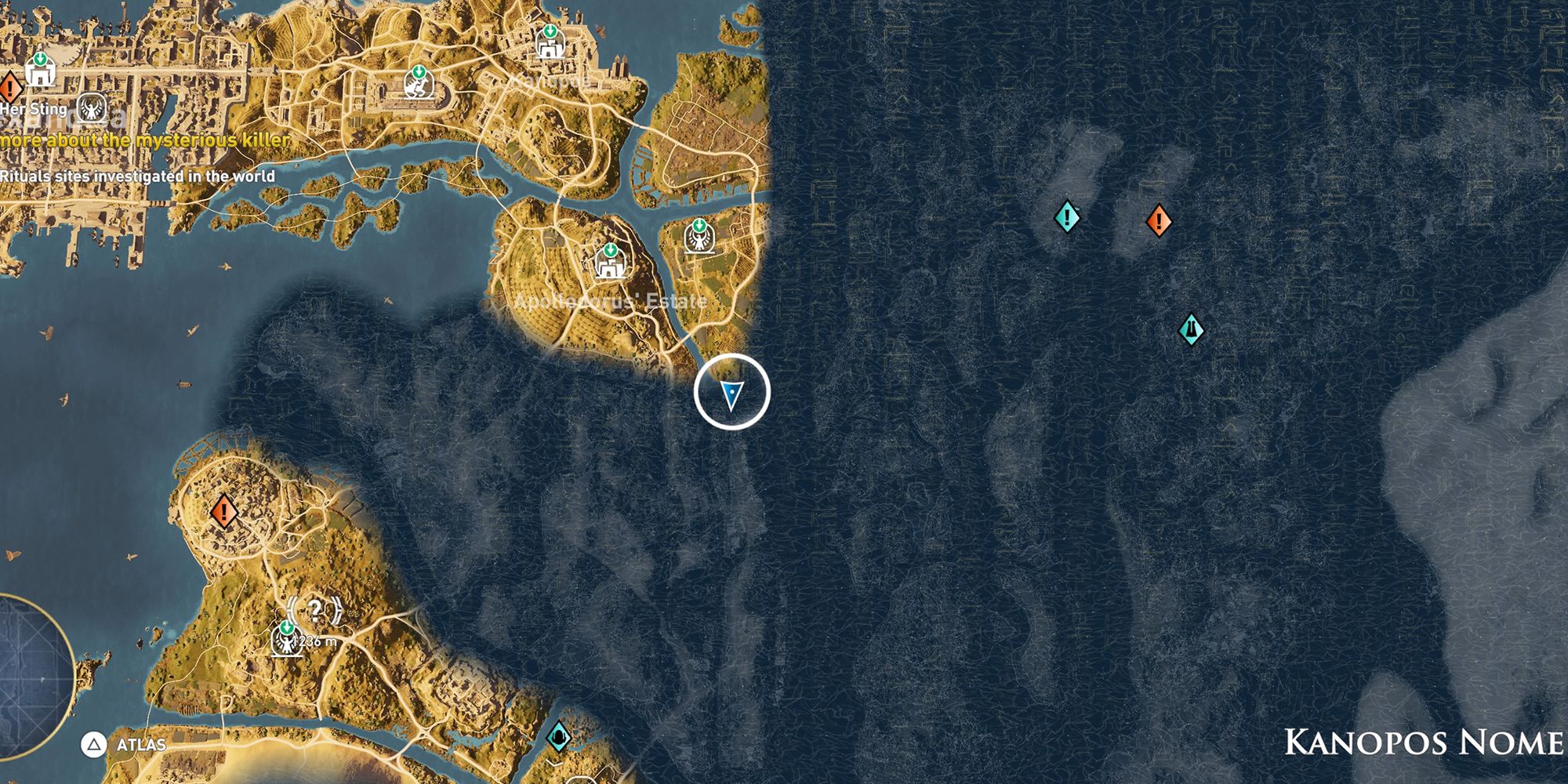 The third ritual site can be found near a Crocodile Lair in Kanopos Nome, in the southeast part of the area, on the border to Sap-Meh Nome. There are four items to investigate here. 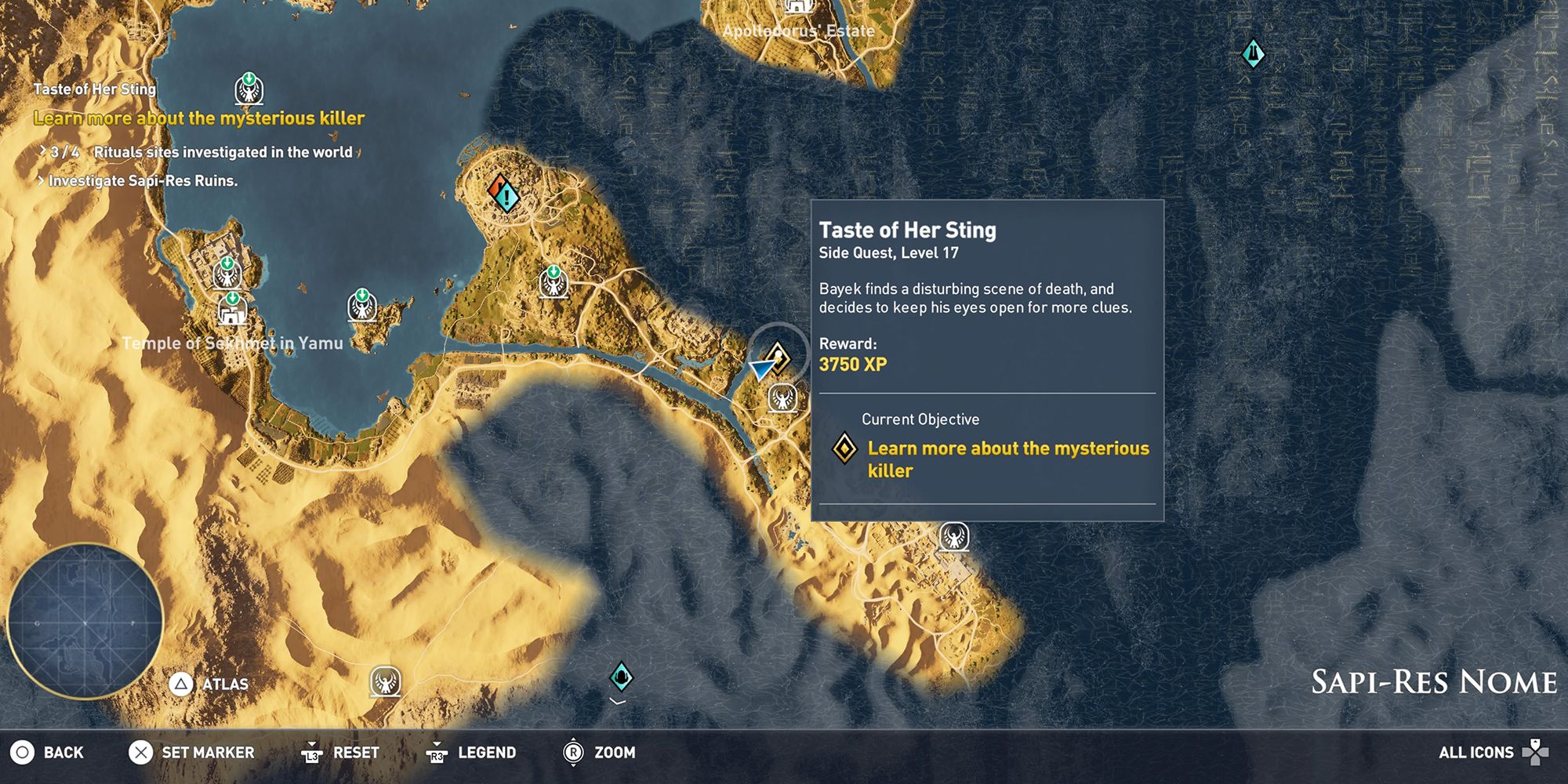 The fourth ritual site is located in the Sapi-Res Ruins, in Sapi-Res Nome, in the central part of the area to the east of Nikou Fort. There are four items to find here, detailed below.

After investigating all four of these ruins, the final ritual site will become available. 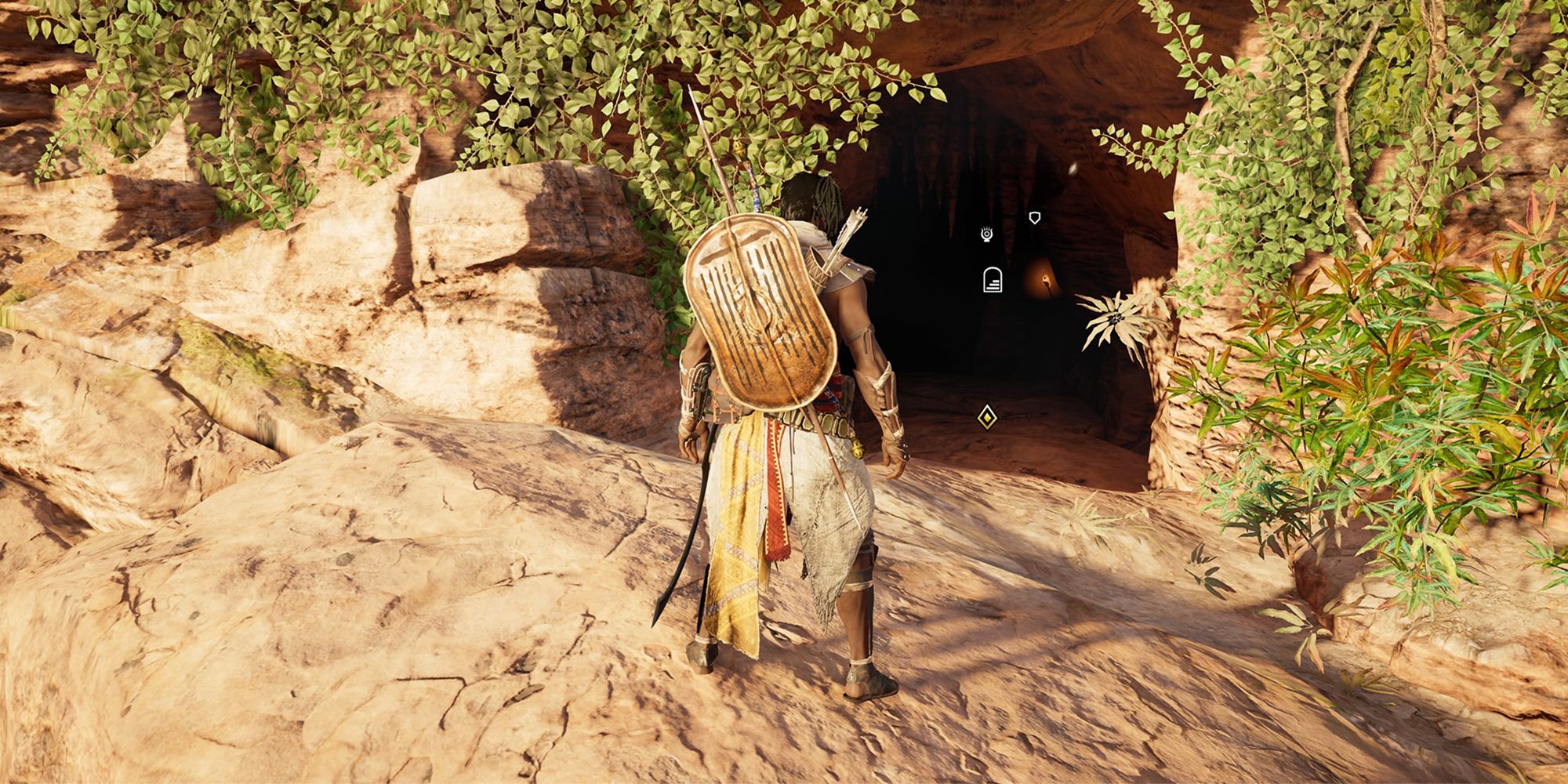 This site is marked on your map with a quest marker after investigating the other four ritual sites. Head to the Old Temple in Ka-Khem Nome to complete the final leg of this quest.

Here, you'll first need to deal with the bandits in the area, then head down the stairs and investigate the crack in the wall to hear chanting. Call Senu to mark your target, then go to the target's location, which is a cave entrance. Explore the cave until you reach the end, where you must confront Scorpion, the Prophet of Serqet.

Defeat this enemy and the other worshippers, and, after confirming your kill, the quest will be complete. Be sure to loot the jars around the cave and the large treasure chest in the center for some gold and weapons.