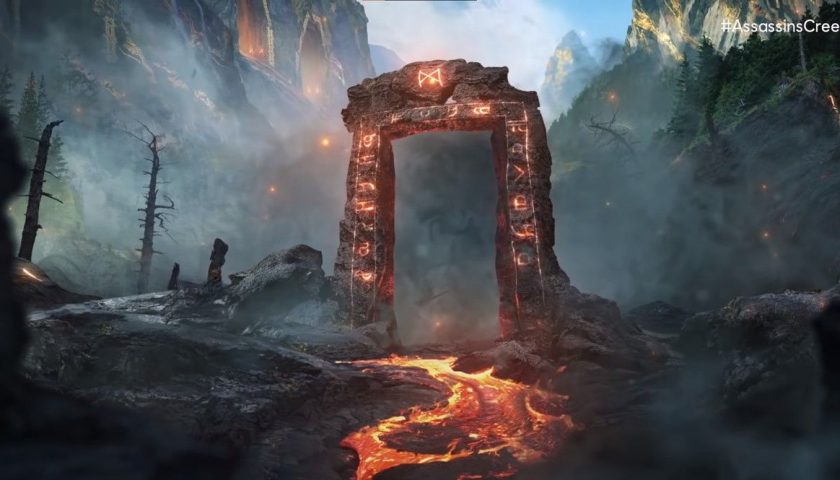 Assassin’s Creed Valhalla tells the story of Eivor and the Raven Clan as they loot, plunder, and forge alliances in a bid to set up a stronghold in England. However, the game also tells another story; one of Odin and the Norse pantheon as they try to stave off Ragnarok. Ubisoft’s E3 presentation hinted that Havi’s journey will continue, and some fans have found a hidden message.

During last week’s Ubisoft Forward, we got a glimpse of the Year 2 support that will be coming to Assassin’s Creed Valhalla. The Siege of Paris expansion will take Eivor to Francia, and will give players a new storyline, weapons, abilities, and enemies. Additionally, a new Discovery Tour mode will allow players to explore England as it was during the setting of the game.

Black Box infiltration missions will make a comeback, giving players absolute freedom in approaching objectives. The showcase ended with a quick tease of a stone gate covered in the Isu language and surrounded by molten lava, suggesting that players will be able to visit another of the Nine Realms, Muspelheim.

While no further details were shared regarding this, fans have managed to decode the language on the gate, which has turned out to be a secret message for Odin from Loki. Assassin’s Creed fans community, Access The Animus, put out a 14-minute long video describing how the Isu language on the gate had been decrypted. It was a meticulous process involving references from the game, promotional material, and even running the audio at the end of the presentation through a spectrum analyzer.

You can check out the entire process in the video, but the final message reads, “Mad One, what have you done?” Followers on Twitter were impressed with the community’s work. Ubisoft also commended the effort, tweeting, “Not us having a contingency plan for if this wasn’t deciphered in the next month. Your excellent work keeps us humble”.

Eivor was able to travel to the realms of Asgard and Jotunheim thanks to a special potion brewed by the Seer of the Raven Clan. It allowed them to see through the eyes of Odin and live out the Allfather’s last days before Ragnarok.