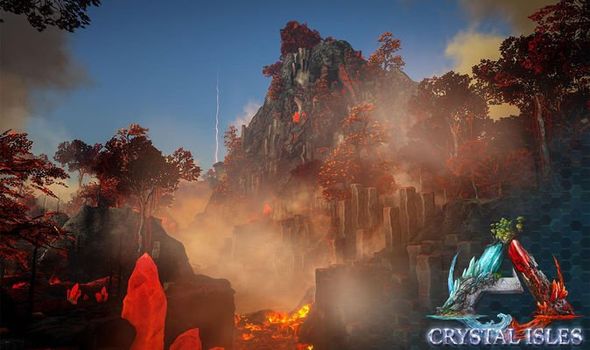 Developers Studio Wildcard has confirmed that they plan to launch ARK Survival Evolved: Crystal Isles on consoles this week. Starting life as a fan-created mod, Crystal Isles has proven to be one of the most free pieces of content for the game on PC. And now it’s the turn of ARK gamers on PS4 and Xbox One to explore the unique island.

The good news is that we know what day the big ARK Survival update will be launched, with more news on the launch schedule coming soon.

For now, we know that the ARK Survival Evolved: Crystal Isles release date has been set for August 25 on PS4 and Xbox One.

And it won’t be just console gamers getting something new to enjoy this week, with Studio Wildcard also making changes to the PC platform too.

“Just a reminder that on Tuesday, August 25th, we will be releasing Crystal Isles for XBOX and PS4 console users,” a message from Studio Wild explains.

“Additionally, we will be enabling full server transfers into Crystal Isles and our freshly launched Official PC Servers. From August 25th, PC players will be able to download items and creatures onto the map without restriction.”

We don’t know the exact release time for the big update yet, but an announcement will be made in the coming hours by the studio.

Fans can expect detailed patch notes regarding all the big changes being shared by the ARK support team after the Crystal Isles launch.

The downside to all this news is that Wildcard has also confirmed that they will be delaying the new Genesis DLC release until early in 2021.

More news regarding the next Genesis DLC will be revealed later this year, with Studio Wildcard confirming in a recent statement:

“Near the beginning of this year, the studio transitioned to working remotely. While the development of Genesis Part 2 has been ongoing throughout, and significant progress has been made, going from a highly collaborative in-office workflow to remote comes with specific challenges.

“Upon further evaluation, we now have a better sense of the production timeline for Genesis Part 2.

“The new locked-in release date is now March 2021 simultaneously on all platforms. We understand that you are eager to get into it, and this news is disappointing; however, we are passionate about delivering something genuinely special, memorable, and suitably epic. This additional time allows us to ensure a better and unique experience and is well worth the investment.

We’ll be showing an extensive first-look at Genesis Part 2 later this year, revealing more details about completing your quest for ultimate survival; the forthcoming preview will reveal some of the new creatures, items, locations, features, and more.”

It should be noted that while Cystal Isles will be available to download and play this week on PS4 and Xbox One, there are no current plans to bring the same support to ARK Survivial Evolved on Nintendo Switch.