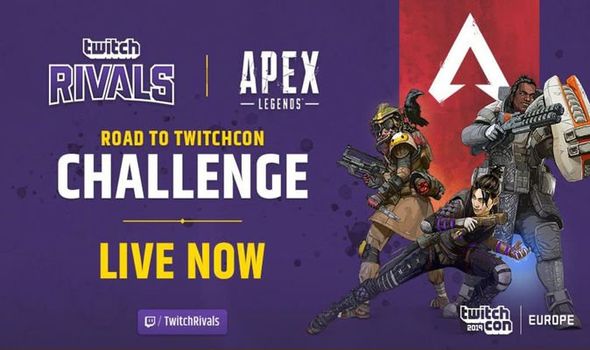 Some of the best Apex Legends players are joining forces in a new Twitch Rivals eSports Challenge tonight.

Teams from Europe and North America will be battling it out as part of a new Road TwitchCon Tournament.

The Twitch Rivals Apex Legends Challenge has begun with European Teams facing off, with a switch to North America expected at 9pm, GMT.

Full results and standings are expected to be announced soon after all the brackets are completed.

A total of four qualifier events have been scheduled and can all be found on the official Twitch Rivals channel.

The Rematch Challenge is currently scheduled for April 2 and will continue the battle leading up to the TwitchCon final on April 13-14, featuring two teams from both Europe and North America.

From what has been posted so far about the Tournament, a total of 96 streamers from Europe and North America are expected to compete.

Teams will earn points based on the following criteria: Match Wins and Kills = +1 point. Placing in the top four will also have an effect on overall ranking.

“Twitch Rivals is an exclusive esports series designed from the ground up for Twitch streamers and viewers.

“This season will include over 100 events featuring new formats, games, interactive extensions, and millions of dollars in prize money.

“The /TwitchRivals channel is home to our anchored studio show and serves as a spotlight for participating Partner and Affiliate streamers as they face off in streamer vs streamer live competitions.

“You can also tune into the channels of anyone participating in an event to see their unique view of the action along with their community.”

Standings from today’s Twitch Rivals Tournament is expected to be listed following the end of regional events.

This Twitch Rival Tournament is the first to feature the new character and is expected to have a direct effect on gameplay.

And it was recently revealed that another Apex Legends character is expected to debut during Season 1.

This was found on the official PlayStation Apex Legends landing page, confirming that two new characters would be part of Season 1.

Here’s the official blurb, which confirms: “Two new characters will launch over the course of the season but in the meantime, look out for a new weapon set to launch as the season progresses.

“Best of all, each new Legend and weapon will launch with a full set of cosmetics to unlock.

“Two new items will be introduced during the season that will offer something new and innovative to the strategic mix.”