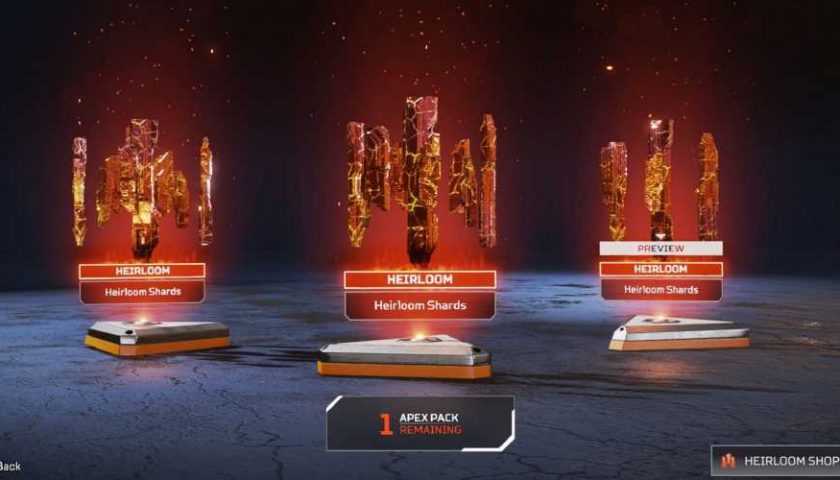 I’ve hit the jackpot. You can keep your 5* Genshin characters or your best pull in Raid: Shadow Legends (I’m sure someone plays that, right?), I’ve just bested you all. I’ve finally got my hands on Apex Legends’ heirloom shards. This beats any Icon I’ve pulled in FIFA – yes, even Cafú – and the rainbow rare Reshiram and Charizard GX I got in my first Sun & Moon Unbroken Bonds Elite Trainer Box. For the most part, that’s because I like Apex Legends more than FIFA or the Pokemon TCG. But also, heirloom shards might be rarer than an Icon and a rainbow rare put together.

I pulled two Icons in Ultimate Team last year. First came Cafú, then Fernando Torres shortly after. I’m not counting SBCs here – Icon packs or challenges for specific players – but this was still impressive. Having never packed an Icon before, I got two in FIFA 22! It was also the FIFA game I grinded hardest – there’s a reason I quit ahead of FIFA 23. I’ll admit my Pokemon pull was pure luck, though.

Similarly to FIFA, I’ve played Apex for hundreds of hours across multiple launchers (remember when Apex wasn’t on Steam?), and never so much as sniffed an heirloom. Until now. I’m not rich enough to pay the ~£200 to complete a Collection Challenge that comes with a guaranteed free heirloom, but I always feel like that would be cheating anyway? Like the kid whose dad is manager of the football team and gets made captain despite seven players being better than them. And it’s five-a-side. There’s no glory in buying your heirloom, you should earn it like the rest of us. Like me.

“What are the odds of packing an heirloom?” I hear you ask. Nobody knows. EA helpfully says the odds are less than 0.1 percent for legal reasons, but doesn’t specify further. The only thing we know for sure is that you’re guaranteed to see some heirloom shards when you open your 500th Apex Pack. It takes a lot to get to 500 of the game’s loot boxes though – for example, if you’re Level 500 (at the old level cap) and completed every Battle Pass across the 14 seasons of the game (but didn’t take part in any events or pick up any Treasure Packs), you’d only have opened 378 Apex Packs to date. While I try to complete most Battle Passes, some seasons are just more engaging than others, so I’m nowhere near that number.

That’s not to say it’s a 1/500 chance, either. Your 500th pack is a pity pack. It contains heirloom shards only if you have yet to earn any, as a way of rewarding you for your dedication and hard luck. The chances of you getting heirloom shards before then? Practically zero. But I’m built different, and three and a half years after I started playing Apex Legends, I finally have the ultimate reward.

I wasn’t looking at the screen when I got my heirloom shards. It’s been years since I stopped believing I’d actually get them, you see, and there are no cosmetics left I really want. I’ve got all the best skins for the characters I use, and some great ones for characters I don’t. So when I turned back from Twitter to look at the results of my Apex Pack, I practically fell out of my chair. I’ve watched so many streamers unlock the precious red pack while live, I’ve watched hundreds of Apex pros juke it out while flexing their coveted cosmetics earned through more playtime than us mortals could comprehend, and I never thought that would be me. But now I’ve finally joined this exclusive club, I’m faced with a problem. Which heirloom do I unlock?

I know, I know. My diamond shoes are too tight, I’m complaining about the most first world of problems. But there is a conundrum here, which starts with the fact that I don’t really have a main any more. For the past couple of seasons I’ve been terrorising public lobbies with Fuse. He doesn’t have an heirloom, and besides, he’s just a fun character with a great personality. If I ever tackle Ranked again, it won’t be with Fuse. He also does not have an heirloom, but I could save my shards and wait it out.

Before Fuse, I used Loba quite a lot. She’s just received her brand new heirloom, a killer fan, and it will soon be craftable with heirloom shards. But I don’t like it. Don’t ask me why, but it just isn’t doing it for me. The animations are great, it fits her character, and it plays into her backstory, but it’s not for me. Before Loba, I was a die hard Bloodhound main. Bloodhound has a classic heirloom, an axe that fits their Nordic hunter vibe perfectly. I like the aesthetics, I like the character, so it seems an obvious choice. But there’s no denying the old heirlooms haven’t had the same amount of love poured into them as the new ones.

The best heirlooms are Valkyrie’s and Revenant’s. Their spear and scythe are big, which helps them to feel important, but the custom animations really sell them to me. Whereas Bloodhound just flips their axe in their hands and fidgets with it, Rev sheathes and unsheathes a giant blade, his mechanical hands go wrong, and he slowly scratches his metal nails down the length of the hilt. Valkyrie has, among others, the best animation in the game, as she drains a painstakingly animated bowl of ramen worthy of one of those Studio Ghibli food compilation videos you see knocking about Twitter with dodgy framerates. The details on her blade are great, too.

But I don’t play Valkyrie, and I’ve used Revenant even fewer times. Modern heirlooms simply have better animations, you get more value for your shards. Is it time to change my main based on their heirloom quality? Or do I just bite the bullet and stick with my old flame Bloodhound, turning back time to Season 0 and my first four seasons of Apex? It’s a big decision, and I’m going to take my time with it. I just never expected to feel so torn on the day I finally got my heirloom shards.