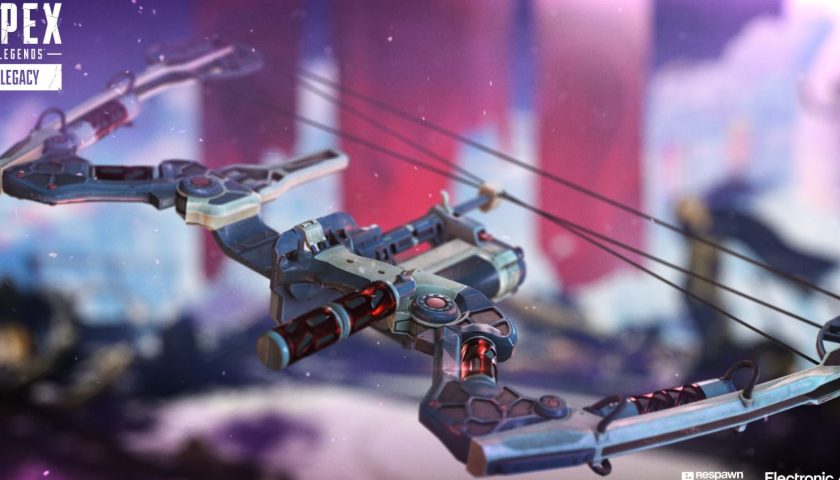 Apex Legends Season 9: Legacy has launched, and yes, it is now fully playable. You may encounter a “No Servers Found” message at peak times, but give it a moment and you should be able to log in and start playing the brand new season.

This season has some massive additions. The new Legend, Valkyrie, is one such addition that we have covered in detail here. But there’s also the Arenas mode, which puts teams of three against one another on brand new maps. We’ve broken down what you can expect in this guide.

But right now we’re covering Season 9’s brand new weapon, the Bocek Compound Bow, and this weapon is quite unlike those that you’ve used thus far. It has a unique ammo type with properties unlike any other weapon, and even the way scopes are attached is different from the weapons you’re used to. In this guide we’re going to break down everything you need to know about the Bocek Compound Bow, including its two hop-ups. 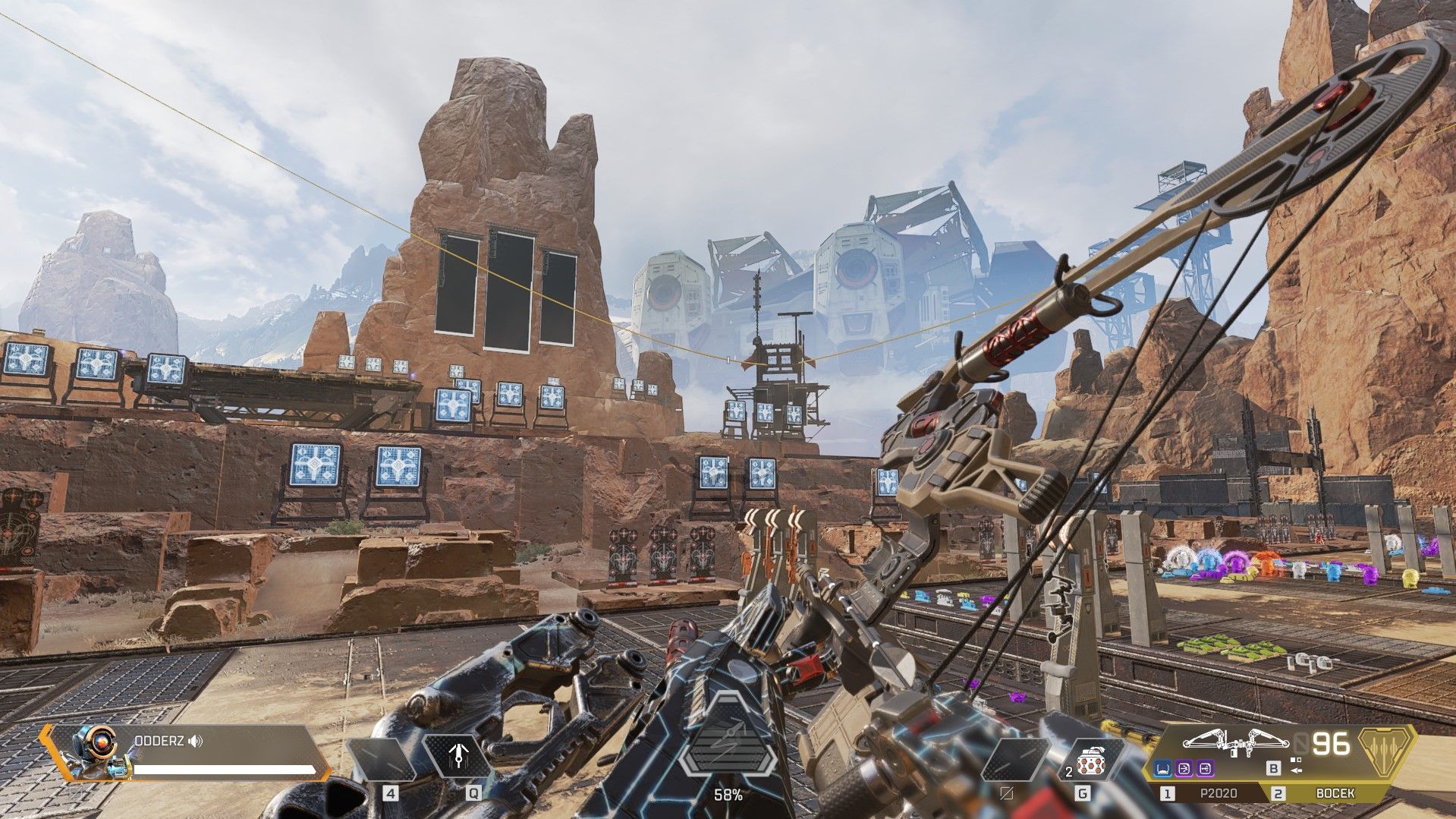 A key thing to remember about the Bocek Bow is that the longer you draw your arrow, the more powerful the hit will be. You can try and rapid-fire it if you like, but unless the enemy is on a sliver of health, this probably won’t work out well.

A quick body shot will take around 30 health off a non-Fortified enemy, while a charged shot does closer to 70, practically shattering a blue shield in a single shot. This means you can aim a few pop shots, and then swap to a faster firing weapon for the final strike. A headshot, meanwhile, will slap enemies with 120 damage, which will practically destroy even a charged red shield – though it will of course do less damage if the enemy has a decent helmet.

The downside to all of this is that the Bocek Bow fires fairly slowly, comparable to the Sentinel sniper rifle – which is exactly why both of those weapons are now able to use the Deadeye’s Tempo hop-up. Interestingly, the Bocek Bow is the first weapon in the game that can equip two hop-ups at the same time, making it potentially very powerful in a variety of situations. Here’s what you need to know about both of those hop-ups. 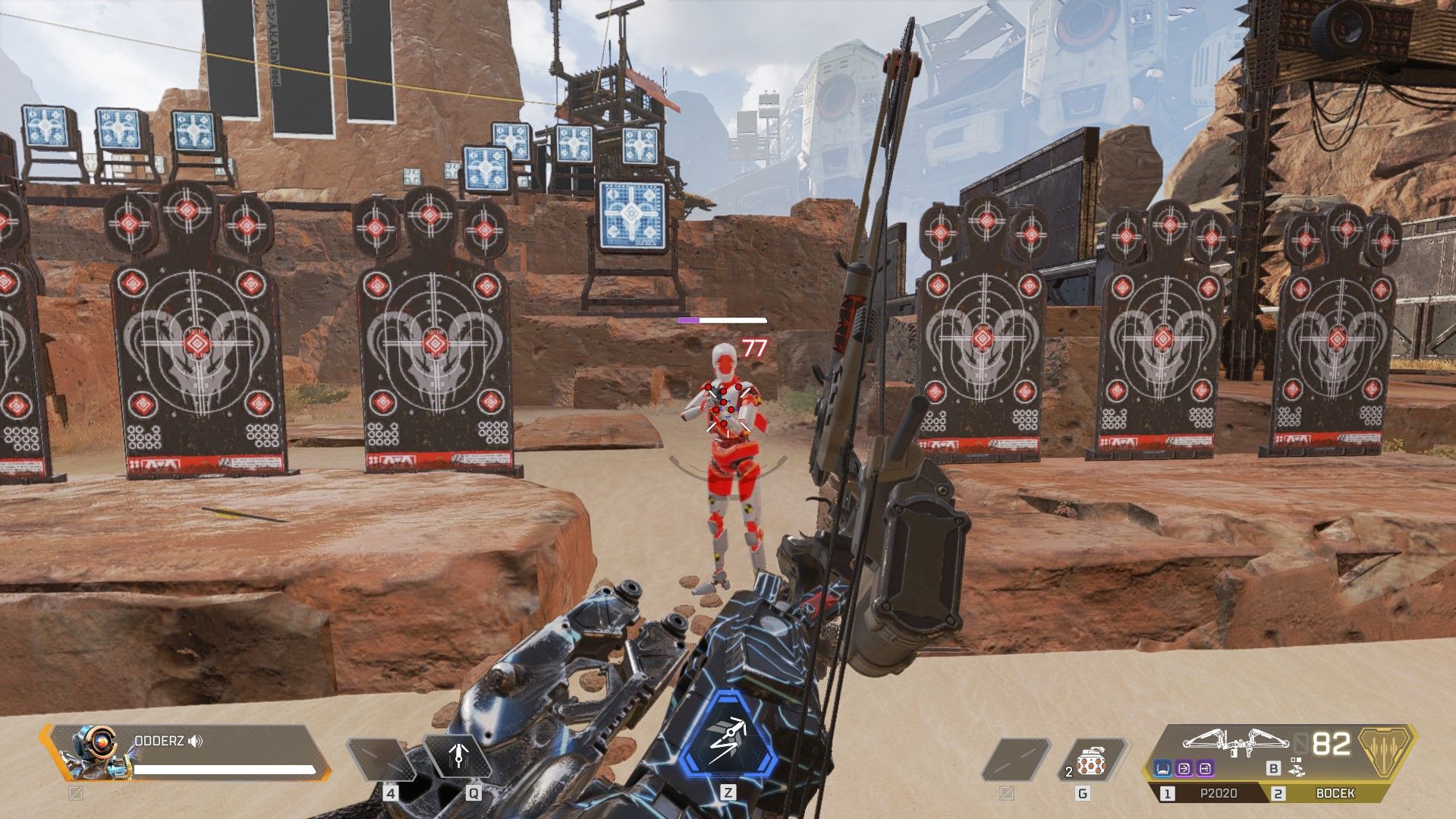 The Shatter Caps hop-up is made for close-range combat. It has a faster fire rate than the default Bocek Bow, but it has extremely limited range. This hop-up essentially transforms the Bocek Bow into a shotgun, and if you’re about to push a team that’s inside a building, this is the perfect way to approach.

The Bocek Bow is, usually, a very competent mid-range weapons, but with the Shatter Caps it restricts it to close-range only. If you had to choose only one hop-up, I’d say that this is the less useful of the two, but of course the Bocek Bow can be equipped with two hop-ups at once.

Keep in mind that the Shatter Caps hop-up also works with the 30-30 Repeater. 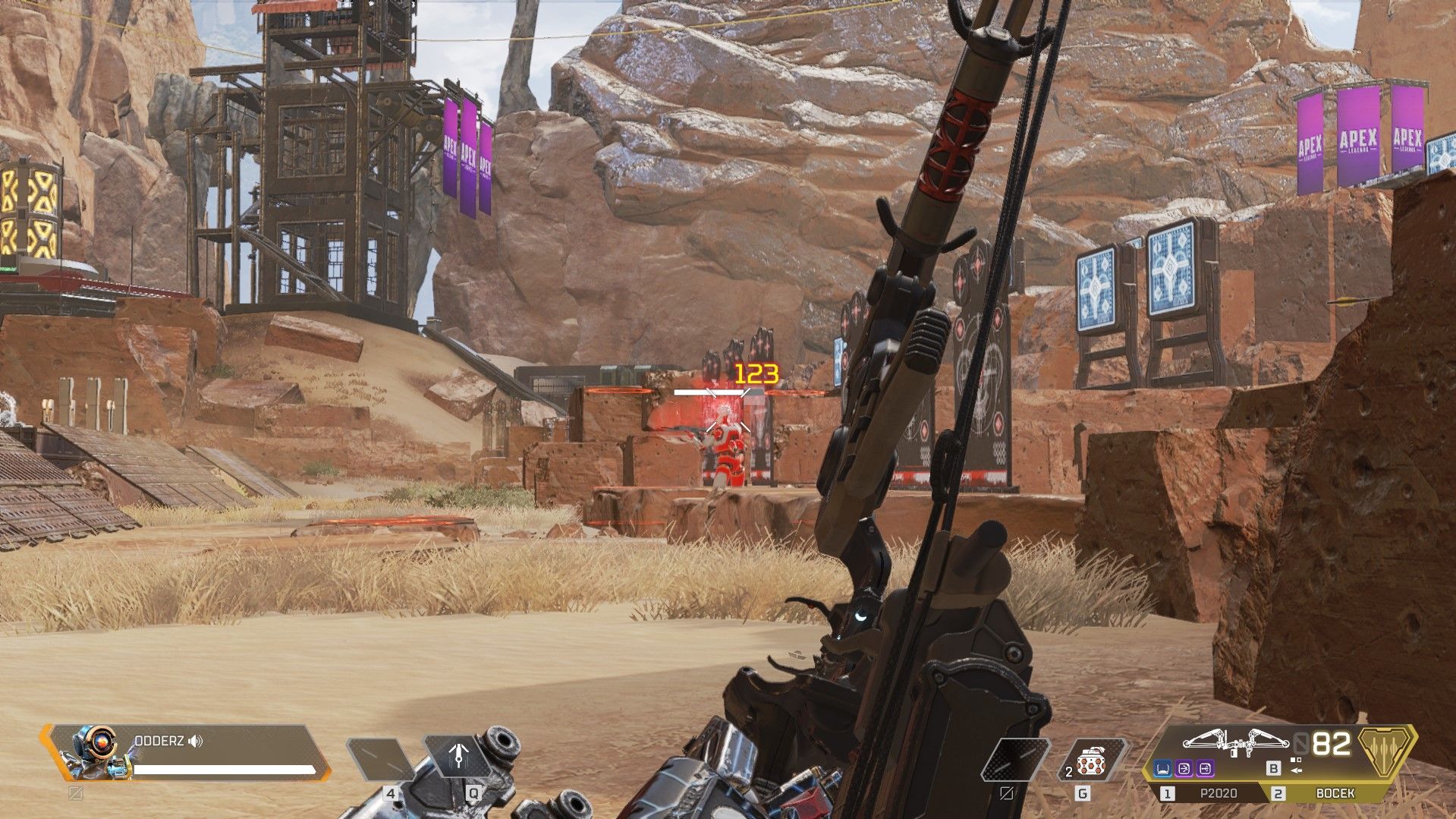 Deadeye’s Tempo is another new hop-up in Apex Legends, and not an attack from One Piece’s Nami. Deadeye’s Tempo literally speeds up the tempo, or fire rate, of your weapon allowing you to lick off fully charged shots much more quickly than by default.

This really is the essential hop-up for the Bocek Bow, and takes it from being a mildly frustrating weapon, to being a truly powerful one. You can quickly pop two shots into an enemy, and even if you miss the head they’ll still be low enough to warrant moving in to finish them off.

The Deadeye’s Tempo also works with the Sentinel, speeding up the infamously slow fire rate to something that makes the weapons much more attractive. 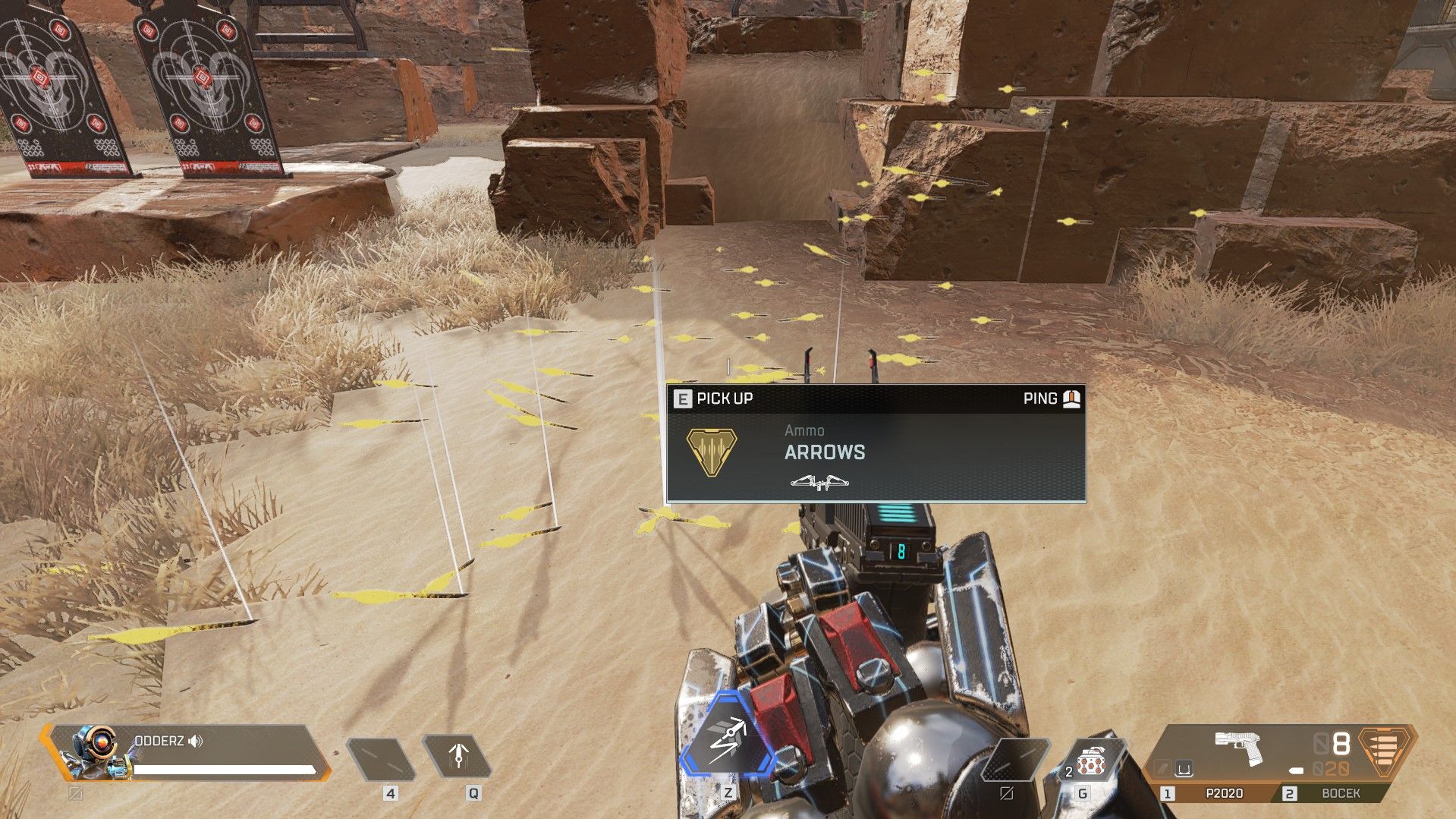 The Bocek Bow uses Arrows for ammo, and this is a brand new ammo type, and the only ammo type in the game that only works with a single weapon. This means arrows are rarer than most ammo types, but you will be able to reuse arrows, luckily.

If you fire arrows into the floor or a wall, you will be able to walk over them or interact with them to pick them up and place them back in your bag. Yes, walking over arrows will automatically collect them, as long as you have a Bocek Bow equipped.

If you manage to get all of your shots into your enemies, then you can still collect the arrows – they’ll be within the enemy’s deathbox once they’ve been taken down, allowing you to resupply quickly and easily.

As mentioned earlier, the Deadeye’s Tempo seriously speeds up the fire rate of the Bocek Bow, and you should use this. The Bocek Bow isn’t good at close range unless using the Shatter Caps, and even then most shotguns are more capable – it’s only there to be used when you have no other weapon capable of a close-range engagement, really, since it’s only barely better than a Mozambique. Deadeye’s Tempo, however, will allow you to shatter even the most robust of shields with only a couple of charged shots, always giving you the opportunity to slide in and begin using a faster-firing weapon, like the R-99, to finish the job.

In addition to all of that, the Bocek Bow is also much quieter than any other weapon in the game. Yes, you will hear the arrows whiz past your head, but it’ll be difficult to pinpoint exactly where they were coming from, because the Bocek doesn’t let off a loud gunshot when firing. If you like to approach engagements with stealth, this is the perfect weapon for it.