Amplifying New Voices, a program that trains diverse game industry people to be good speakers, has found a permanent home with the Academy of Interactive Arts & Sciences Foundation, the nonprofit that stages the DICE Summit game event each February.

The group has staged its boot camps for training new voices such as women and underrepresented minorities. It has created workshops that focus on professional skills and representation. 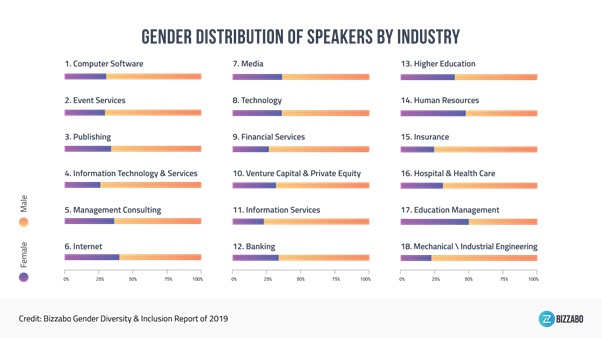 Above: Bizzabo’s study of gender diversity at events.

The goal of the program is to help provide more diverse speakers at game events. Bizzabo, an event platform, recently did a study on gender diversity, analyzing more than 60,000 event speakers over a seven-year period. It found that 66% of all speakers were male, while just 33% were female.

The study spanned events across 58 countries, five continents, 45 industries and thousands of the world’s largest professional events. That’s why Scavio and Perrin Kaplan, Robin Hunicke, and Caryl Shaw founded the program and helped develop it over the past six years. The program received funding from one of the industry’s big game companies.

Above: Amplifying New Voices is now under the AIAS Foundation.

“As the gaming industry evolves, we have an obligation to amplify voices from all aspects of our community. We can help change and shape the space of our industry by mentoring diverse participants who are emboldened to become our next generation of leaders,” the program said on its website. It provides hands-on training and coaching for applicants who demonstrate high potential as new voices, with the goal of creating outstanding, activated role models for under-represented groups and perspectives.

The goal is to help change the face of the game industry, particularly in leadership roles such as event speakers. Amplifying New Voices is recruiting a new batch of applicants for its next workshop.

The group is looking for applicants who self-identify as underrepresented, have been in the games industry for at least three years, and have shipped at least one or two titles. The goal is to provide training for early or mid-career developers to professionally represent their game or company to their peers, audience, and/or media.

Kaplan said the original group was independent and yet it didn’t have a permanent home. She said in an email, “Now it’s under the safe and priority care of AIAS. It’s important to Meggan and the founders.”