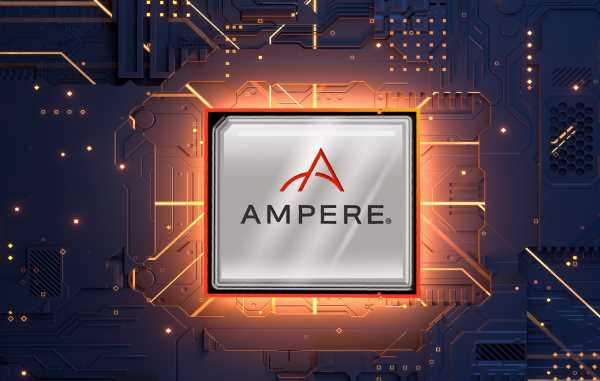 Ampere has had a big year, with the launch of two Altra server processors that have outgunned rivals Intel and Advanced Micro Devices in some key server features. Now the company plans to race ahead with even more powerful chips in the next couple of years, CEO Renee James told VentureBeat in an interview.

Such Arm-based chips are a key part of the datacenter ecosystem, as the world needs ever bigger and more powerful datacenters that consume less power than the PC-based processors rivals sell.

Ampere’s Altra processor shipping now has 80 cores and operates on much less power per core than rival Intel and AMD chips, Ampere chief product officer Jeff Wittich said in an interview with VentureBeat. The Altra Max processor has 128 cores and is going to ship later this year. And Wittich said Ampere’s next-generation processor will be sampling on a five-nanometer manufacturing process (where the width between circuits is 5 billionths of a meter) in the first half of 2022.

That processor will be based on Ampere’s own uniquely designed core, as will another next-generation chip scheduled for 2023, James said. Ampere has collected more than 100 patents since it was founded a few years ago.

“For a lot of people, what they’ve been waiting to hear from us is our long-term roadmap and who are the customers for all of this,” James said. “We’ll have Tencent and Oracle and Microsoft, and then many, many others are also going to be public. So it’s a very exciting day for us. Because I would say that after three and a half years since we started the company, it’s our real showing of the vision for Ampere and the caliber of customers that are working with our products.”

Ampere’s earlier chips used the Arm-designed Neoverse N1 core. But Ampere’s own core is a big deal, as it’s the equivalent of Apple offering its Arm-based M1 processor. Ampere is an Arm architecture licensee, which means it can develop its own instructions and unique features for its Arm-based processors. The 2022 and 2023 processors will use Ampere’s unique cores, which will help those devices become even more power-efficient and can handle specific customer requests, like better telemetry.

“We’re developing a CPU from the ground up that’s built for the cloud,” Wittich said. “The infrastructure demands a new CPU. And for us, that means predictable high-performance platform scalability and power efficiency. As we walk through the product roadmap, it becomes more clear how we’re uniquely delivering these things.”

Microsoft will talk today at Ampere’s event about how it uses Ampere in datacenters and why power efficiency really matters, as Ampere Altra will help Microsoft hit its carbon-neutral goals by 2030.

Major internet infrastructure company Equinix is another customer trying to lower its carbon footprint, as customers are coming in asking for more power efficiency.

“We have a really rapid cadence,” Wittich said. “We can move at the speed we need to with our customers. From a customer perspective, this is not that complex. We have big ambitions every year to deliver the leading-edge processors for the cloud and deliver them horizontally across the entire market. Having our own core really allows us to do that.” 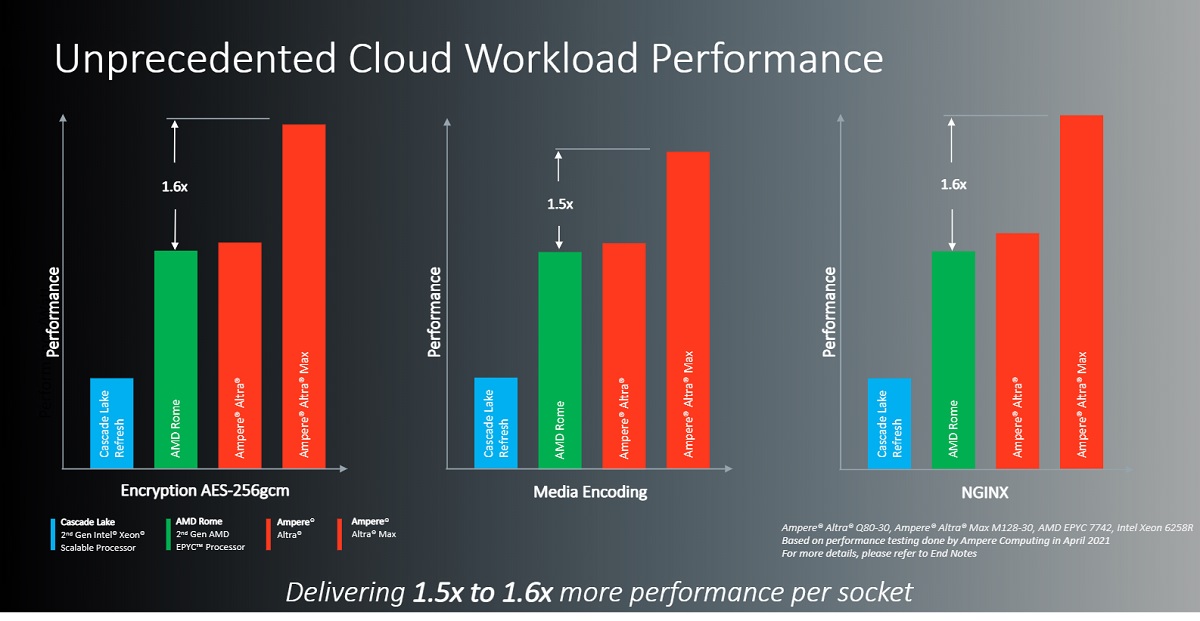 Above: Ampere claims better performance than Intel and AMD.

Wittich said his company has the highest core count in the market, and he noted that the chip’s overall performance doesn’t drop off with the addition of more cores, in contrast to server chips from Intel and AMD. He said that Ampere’s Altra Max performance is 1.5 times to 1.6 times faster than AMD at half the power.

A number of customers in Asia are using the Ampere processors, such as Foxconn, TikTok owner ByteDance, and Tencent. As for Nvidia’s pending acquisition of Arm, James said she has not weighed in on that yet and is waiting to see what happens with the regulatory review of the $40 billion deal. She said the semiconductor shortage has affected Ampere, as well as everyone else in the industry, but that her company planned for the product ramp.

“This is a lot about execution,” James said. “I’m really proud of the execution of our team.”