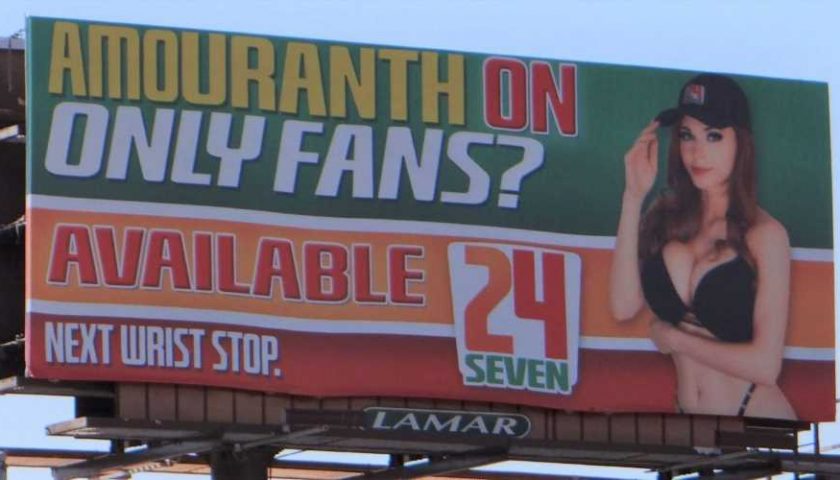 Amouranth is the master of publicity. She does something wild, we all talk about it. We're very guilty of playing a part in this, but it pulls in the views, so this is what you all want, apparently.

However, the streamer is doing something a lot more conventional to advertise her business this time around, but still very on-brand. Amouranth has paid for billboards to be put up around LA, advertising her OnlyFans and her recent gas station purchases.

Confused drivers on the highway started sharing pictures of the strange billboards on Twitter earlier today, not entirely certain if the advertisements were official or not. Indeed, it's certainly a new one for Amouranth, and would suggest that she's trying to reach an entirely new demographic with her content – one that isn't plugged into social media 24/7. Or, you know, she knew how wild we'd find all of this, and how we'd all end up talking about it. Gotta respect the hustle.

Amouranth has since said that she's responsible for the billboards being put up, and is asking fans to share pictures with her when they see them in person. She plans to have more up soon, and keep them going for at least a month.

Despite advertising her OnlyFans account on the billboard, Amouranth's work is also available on the site's direct competitor, Centerfold. This Playboy platform launched in December, and bagged Amouranth as a founding member. It bills itself as sex-positive and creator-driven, and also features stars such as Cardi B and Lana Rhodes.

That's hardly the only business venture Amouranth has embarked on recently. She's also been purchasing gas stations in an effort to pay less tax – one of which set her back an eyewatering $10,000,000. However, not everyone is in agreement that she got her calculations right, and she may not be paying less in taxes after all.