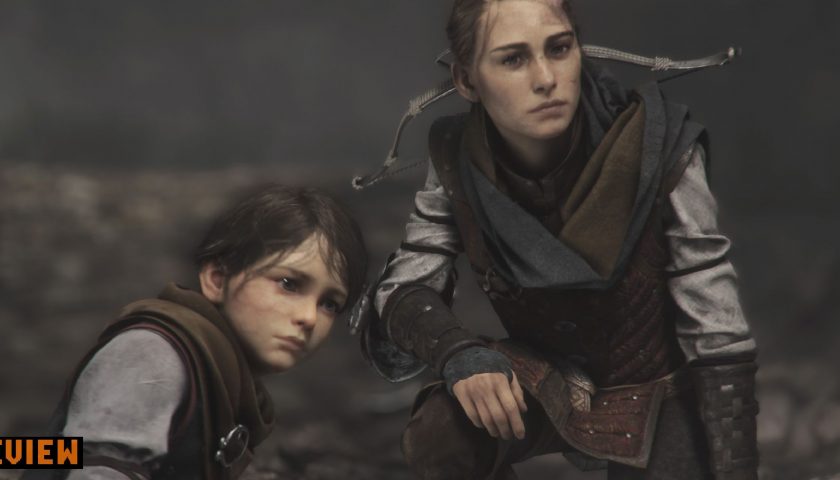 The first time I used Amicia’s sling to fend off a horde of soldiers was tense and gratifying. The sequence played out like a puzzle, forcing me to quickly figure out how best to defeat the different types of enemies before one of them could get close enough to land a finishing blow. The cumbersome sling highlighted that Amicia is just an ill-equipped child, not supposed to be fighting these battles and taking lives. Eventually, I’d lost track of how many shootouts I’d suffered through and they’d lost all their appeal, becoming nothing more than frustrating padding on the road to concluding a disappointingly hopeless game.

A Plague Tale: Requiem comes out of the gate strong. Amicia and Hugo de Rune are unraveling, slowly becoming undone by the traumatic events experienced in the first game. All Amicia cares about is curing Hugo of the curse that runs through his veins and threatens to consume him, like rats gnawing at a rotting corpse. She’s devoted to a fault and her drive eats away at her. She’s fighting against impossible odds, and Requiem never let me forget it. She carries her scars with her throughout, both physical and mental, and is irreparably changed by the end. Charlotte McBurney and Robyn Wolf do a fantastic job of voice acting and motion capture, making Amicia’s performance throughout heart-wrenchingly believable.

The game’s first half brilliantly weaves narrative drama and exploration with tense combat sections, ensuring I was never left bored or waiting for the next big set piece. But looking back, it’s clear Requiem's first dalliance with danger is its best. As Amicia and Hugo play, they stumble upon a supposedly abandoned castle. It turns out to be a farm, taken over by paranoid beekeepers in terrifying protective suits with circular, worm-like masks. Their look is deeply unsettling, and the sequence perfectly reintroduces the high-stakes stealth gameplay Innocence excelled at. 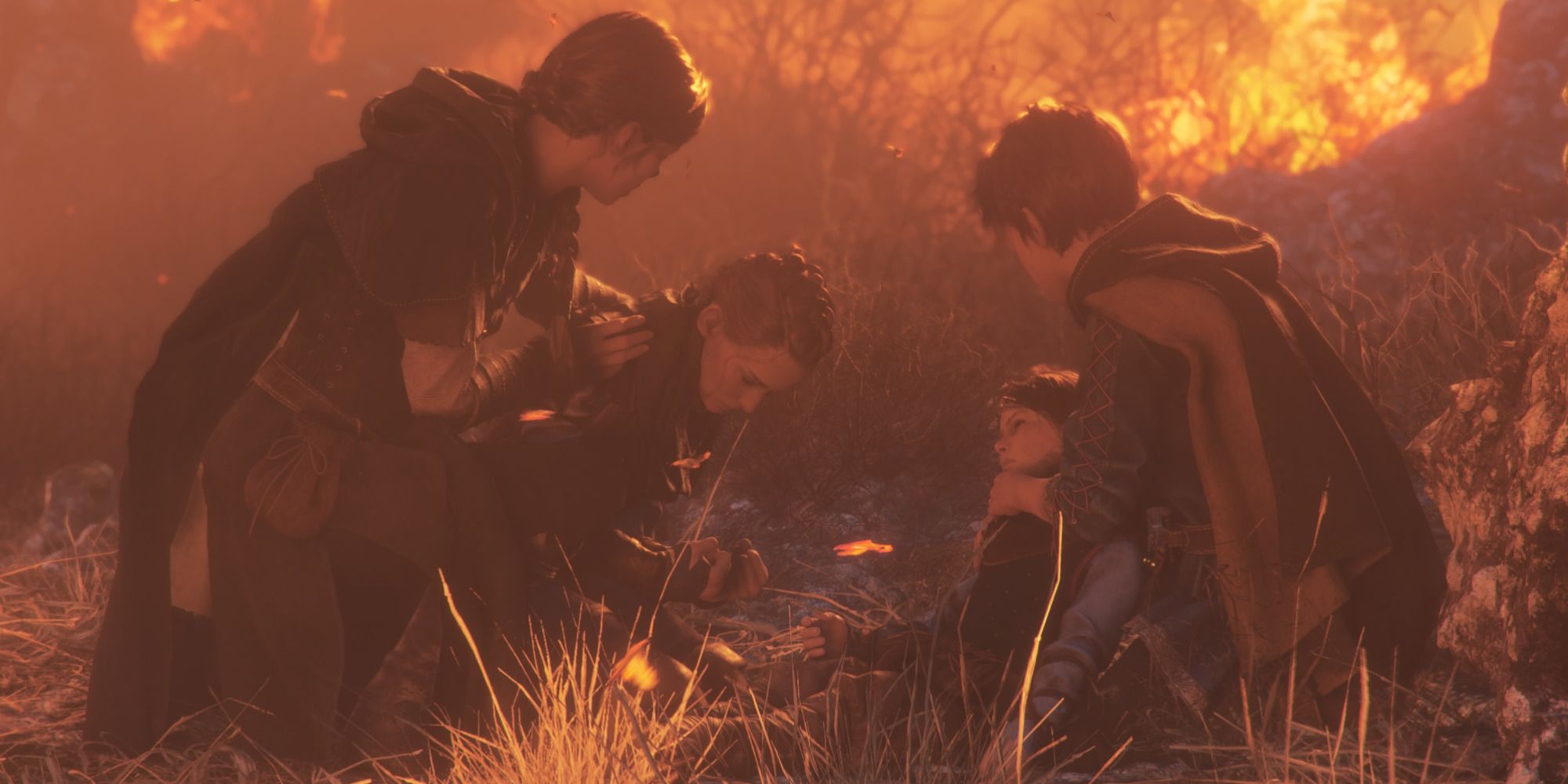 However, Requiem quickly shifts its priorities from the sneaky to the lethal, a point driven home by the now infinite rocks you have available to load your sling with. In Innocence, taking a life was a last resort, one that drained your already limited resources. In Requiem, it’s easy, meaningless. This neatly fits the game thematically, but the point that Amicia and Hugo are turning into blood-thirsty killing machines is made about halfway through and then greatly overstays its welcome. The first time Amicia stands her ground and slaughters a load of soldiers is poignant. It’s a release for all the pain and hurt she bares, but there are only so many times I can be chastised for Amicia giving into her darker impulses before I start to get frustrated and lose faith in her myself, and the sheer number of shooting galleries present in the final act forced me to endure the janky combat over the refined stealth, just like Innocence did.

Several moments in Requiem appeared to present me with a choice, chances for redemption, but actually served to hammer home the already obvious message that no matter how hard you try, things don’t always work out. No matter what approach I took to save a herbalist, he was always going to be eaten alive by rats. When I tried to free a man from being hanged using distraction and subterfuge, I was instead met with several scripted waves of enemies. The choice is a blatant illusion. 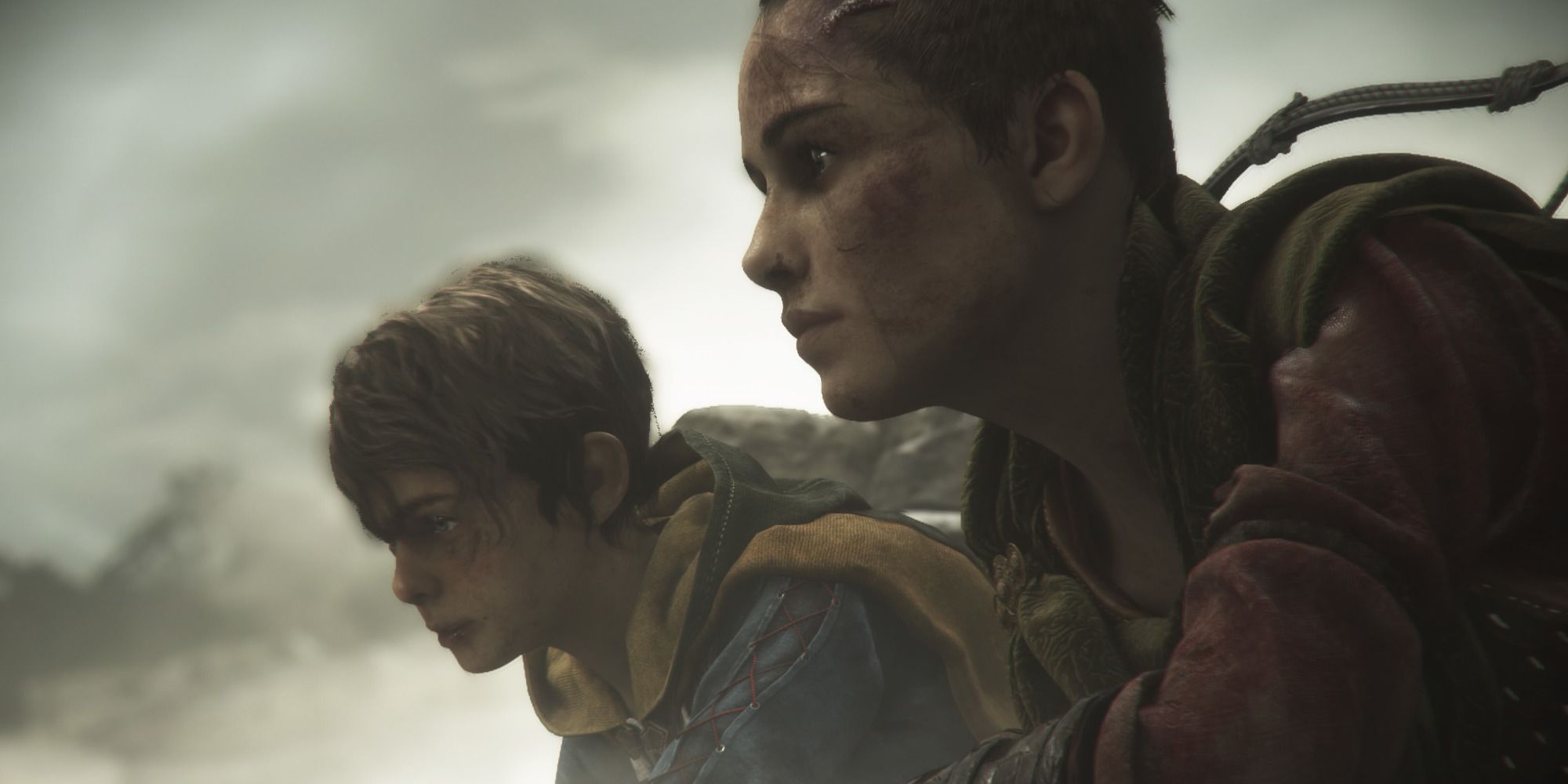 It’s a good message if things actually work out once in a while, but they never do. Everywhere they go, the plague follows, driven by the Macula in Hugo’s blood. It leads to some spectacular scenes, such as an entire city being destroyed by a tsunami of rats. Glimpses of modern society’s timeless problems are reflected in the tragedy. The poor are left to die, trapped in overpopulated slums while the Lords and Aristocracy stay safe in their castles. It’s an interesting point that reflects the inequality made apparent by the Covid pandemic, but it’s never interrogated with any depth. The poor get fucked over by the rich, that’s it.

The grand scale of destruction also introduces Uncharted-style running segments where Amicia and Hugo have to flee crumbling rooftops or infested sewers as a torrent of rats bursts forth towards them, making the duo feel small and helpless against this evil force of nature. Rather than inspiring hope or encouraging me to do more and try harder against the odds, the narrative surrenders to misery and I’m being told the battle is already lost and all resistance is futile. 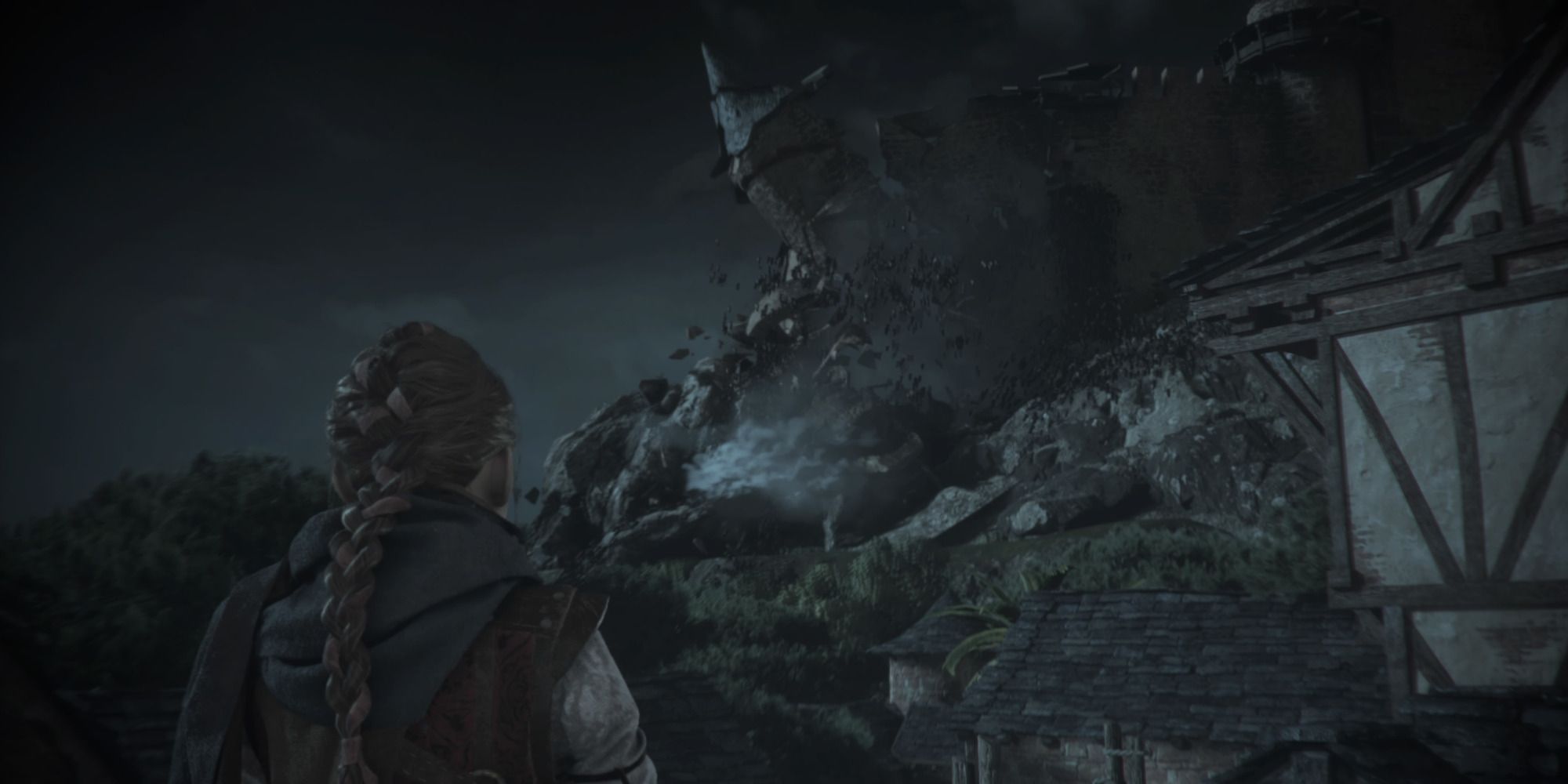 WIth a change in scale also comes a big change to level design. It’s akin to the jump between The Last of Us and Part 2. It’s larger, more open, and each level allows Amicia to re-enter stealth if a mistake is made. Enemies are also smarter, alerting others if they so much as suspect someone is intruding on their territory. These sections often grow frustrating, with enemies overwhelming Amicia if not dispatched smartly. It’s nigh on impossible to get through some sections without killing, a point even the various companions Amicia has with her acknowledge. I’ve made this point a lot: death is a necessity, trying is pointless, we’re all doomed, but so does Requiem. Over and over again it screams it in my face until I wonder why I’m even playing at all.

This larger scale is clearly pushing even the PS5 to its limits, and often it struggles to keep up. Developer Asobo boasted that there are now 30,000 rats on screen, 60 times more than the original could handle. Unfortunately, the framerate drops substantially when these swarms are near fire, which, given large parts of the game involve repelling the rodents using light sources, happens quite a lot. Other bugs like Amicia getting caught on terrain, texture and shadow pop-in, and companions not moving far forward enough to progress a sequence hinder an otherwise gorgeous game with a stellar soundtrack. The choral songs are hauntingly beautiful and act as an amazing accompaniment to Amicia and Hugo’s journey. But sweet songs aren’t enough to detract from the horrors playing out on screen. 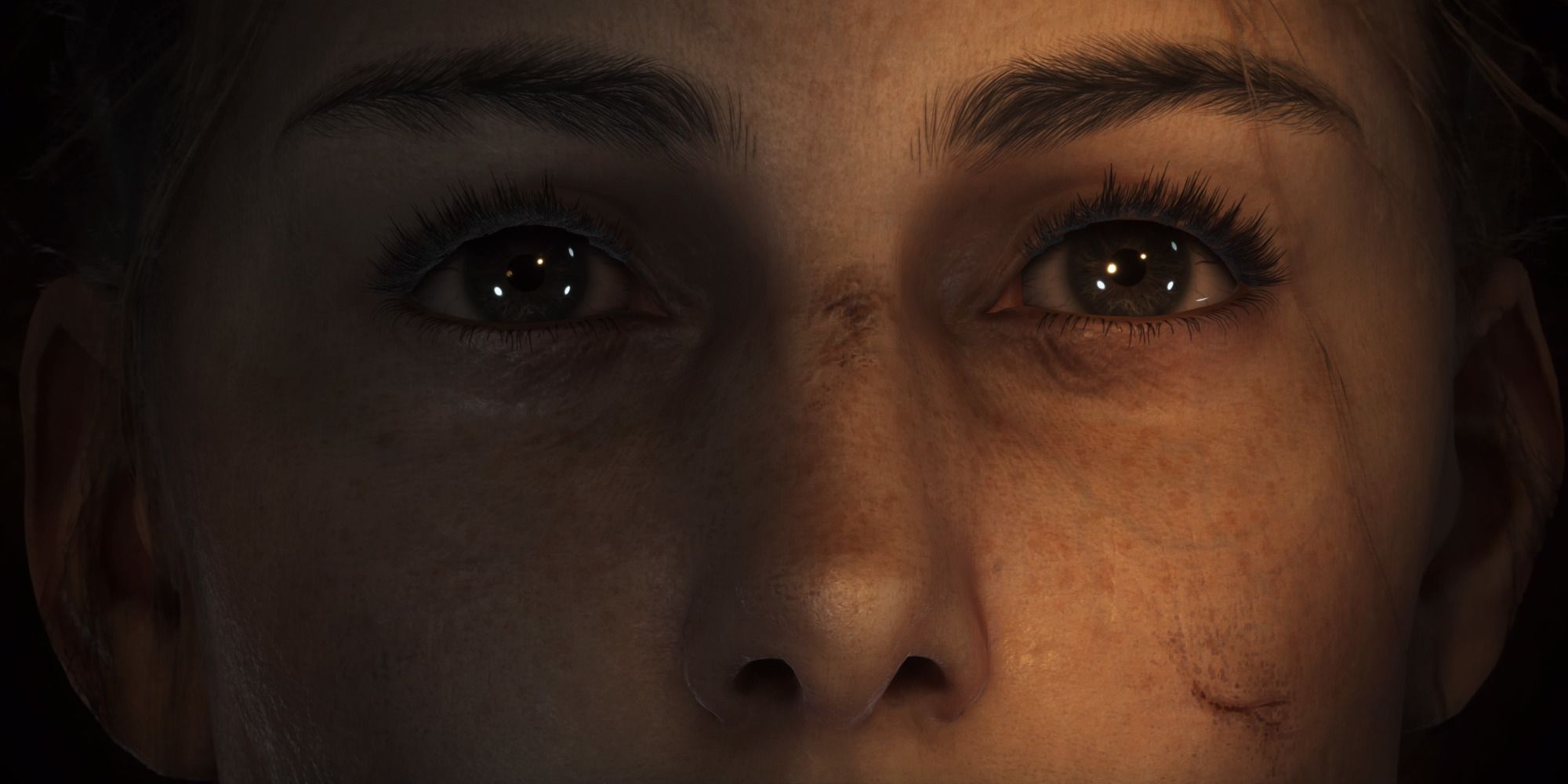 A Plague Tale: Requiem is relentless in its depiction of misery. It imparts the troubling message that no matter how hard we try, we can’t change the future, and trying to do so only invites more pain and suffering than willingly submitting to our eventual demise. A series about two children losing their innocence and being corrupted by the evils of the world is one I welcome, but not when it teaches us to give up instead of fighting for a future all our own. The world may seem hopeless right now, but if we give in to the despair we’re choosing doom, and I’d rather go down slinging.