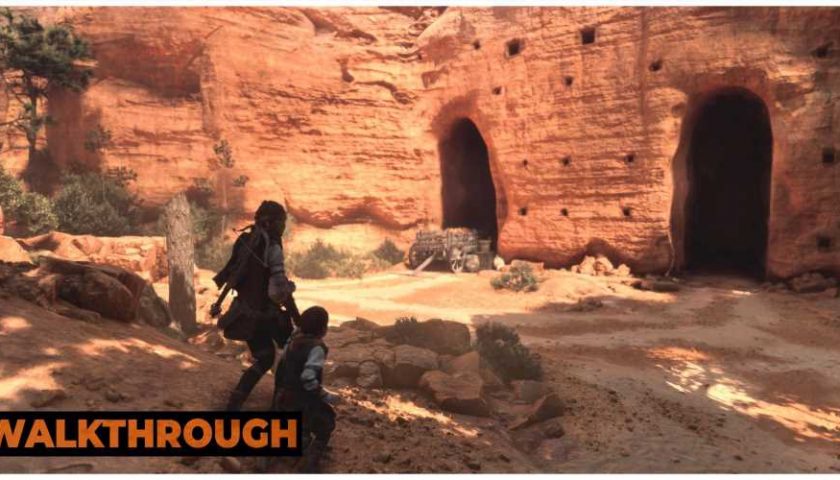 Many new dangers await Amicia and Hugo de Rune in A Plague Tale: Requiem. Despite their escape from the Inquisition in the previous game, Hugo is still not safe. The Macula in his blood has begun reacting again, and the rats have returned, spreading death everywhere.

The sixth chapter of the game features Amicia and Hugo embarking on their own after being separated from Beatrice and Lucas. This chapter is slightly shorter compared to others, and features a solid balance of exploration and combat. Throughout this guide, we’ll take a look at everything you need to know to complete Leaving All Behind. 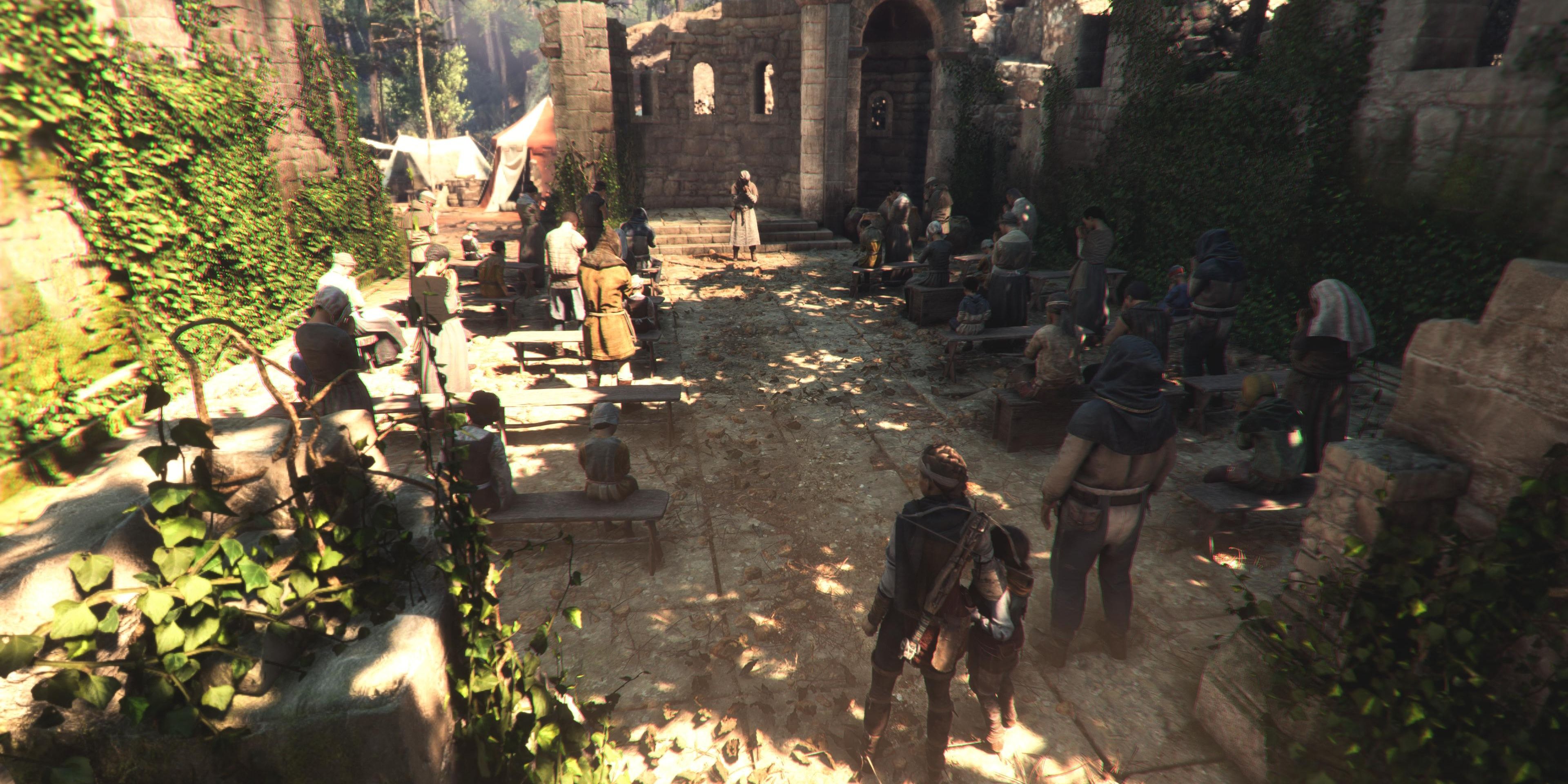 After Hugo helps patch up Amicia’s head wound, the pair must find a way toward the coast. Walk down the main path through the trees and you’ll reach an open field of flowers. Race Hugo to the large tree and he’ll find a Jay feather, telling Amicia that he wants to collect them instead of flowers. Continue making your way through the grassy plains and down a rocky slope until you find a settlement.

The woman by the creek directs the siblings to seek their leader, Perreux, for help in reaching the island. Walk through the encampment until you reach an archway, and wait until the people finish praying.

While speaking with Perreux, Arnaud’s men arrive searching for Amicia and Hugo. Follow Perreux through the camp until you reach a wagon on the left, and quickly crawl underneath. When the coast is clear, jump over the fence and cross through the horses.

Soldiers will spot you escaping, so sprint ahead and slide under the tree. Amicia and Hugo will tumble down the rocks, and Amicia is extremely shaken up. Continue running through the rocks, and there will be two large openings in the rock wall. Head into the opening on the right, then turn right and crawl under the wooden blockage.

Send Hugo through the tiny hole in the side wall, and he’ll unlock the door. Run up the steps to find a chest with Saltpeter, Pieces, and a Tool, along with a Pyrite next to it. 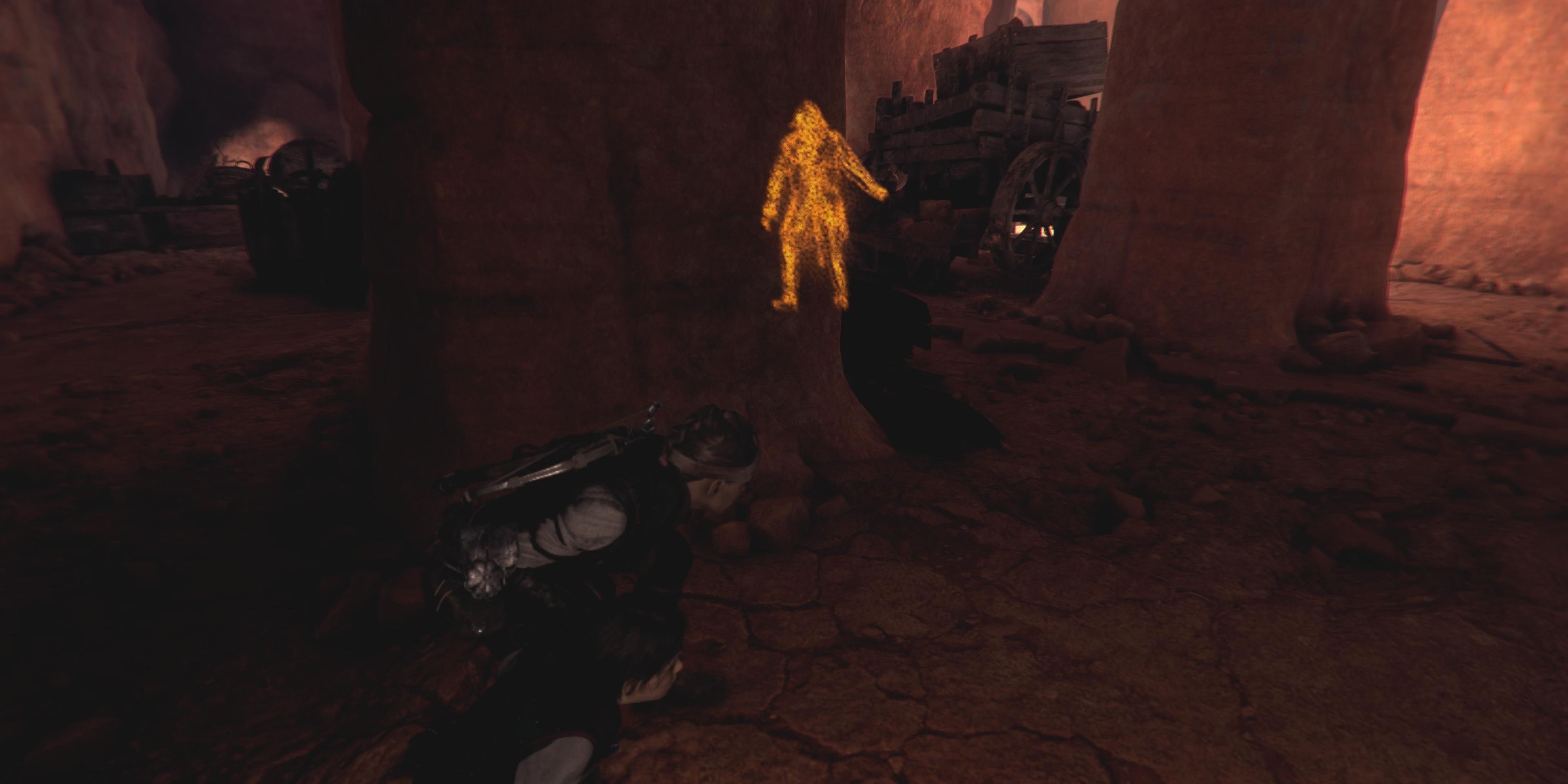 Drop from the ledge, and you’ll find a workbench underneath the platform. Upgrade your equipment and head back into the rock wall but go left. Make another left to find a small chest with Resin, then continue into the structure.

Hugo says he can feel the rats and unlocks a new ability called Echo. Echo sends out a radar to highlight enemies within the area. Use Echo to spot three soldiers lurking behind the pillars, so utilize the toolboxes to create distractions to run to the door.

If you shoot a guard with the Crossbow, it’ll make a sound like the Sling and other guards might be alerted.

Activate Echo again in the next area to highlight the next set of guards. Pick up the knife stuck in the wagon and head to the left wall to find a chest. Avoid the guards to reach a trapdoor that’ll take you back outside. There are several soldiers patrolling the area, so remain hidden in the patches of tall grass. Pluck bolts from trees and find a chest on the right cliff with Sulphur, Resin, and Pieces.

Whether you remain hidden or elect for a more violent alternative, the door at the end of the compound takes you to the stronghold. Crawl under the side opening to find a locked workbench.

After upgrading your equipment, crawl back out of the room and head through the door down the left hall. You’ll be in a massive area but Amicia will collapse from her injuries. Hugo begins to panic and summons the rats to help them. 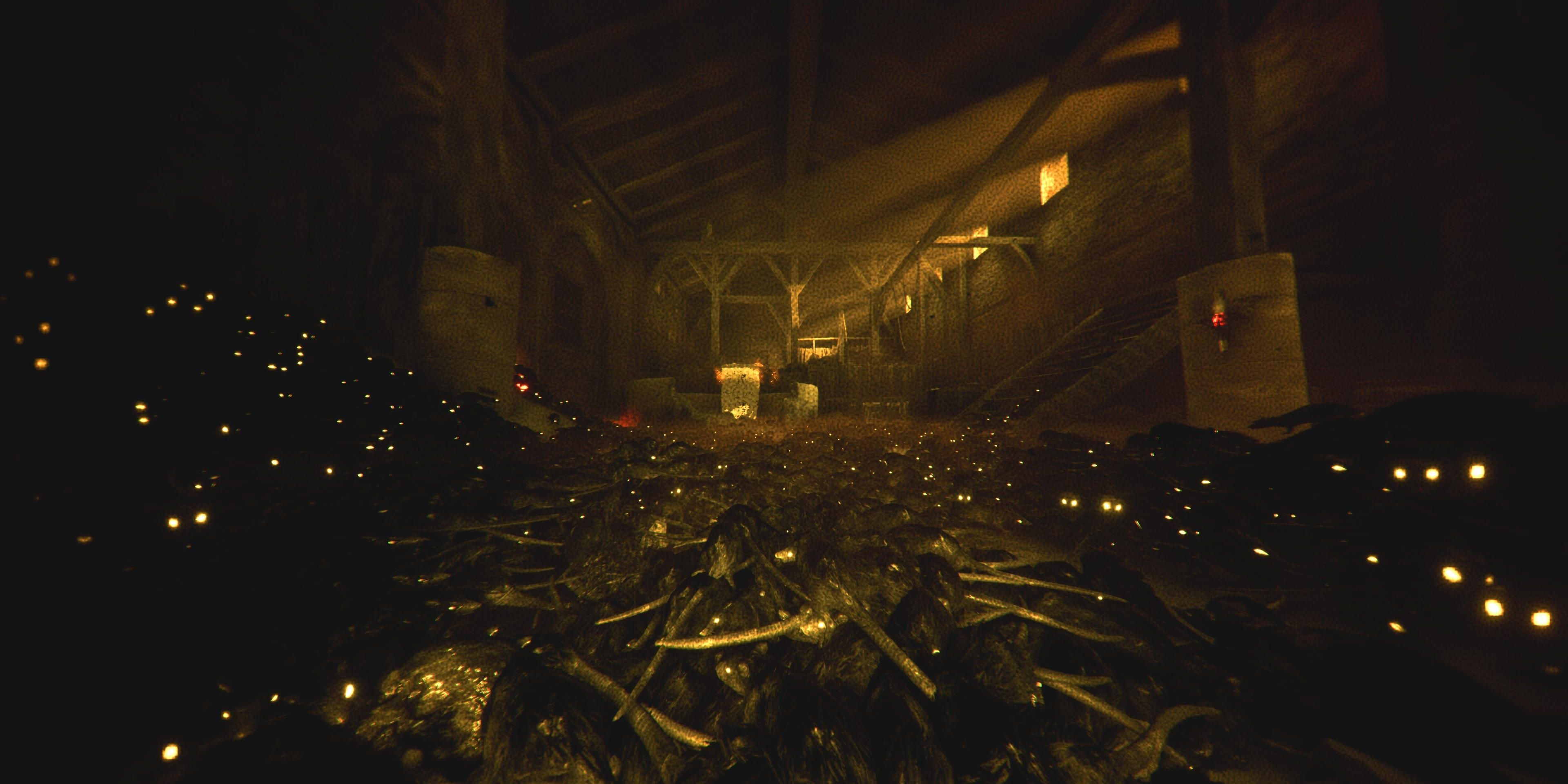 Instead of being an enemy, the rats are here to help… or at least, being controlled by Hugo to help. Seek the guards and the rats will devour them.

The rats can’t cross areas with fire, which is indicated by a red light. Rats can climb up nets, so utilize those to reach higher areas to attack the guards.

More soldiers will arrive, so use Hugo’s new ability Imperium to control the rats and fight the soldiers.

You’ll find a workbench to upgrade your gear, then exit the building to head back outside. There will be several soldiers patrolling the area, so head toward the house on the left to find a chest with Sulphur and Alcohol.

Keep searching the house to find Pyrite on the oven and a pot on a shelf. Jump through the window and use Imperium to control more rats and attack the guards without torches. You’ll need to use Exstinguis on the other guards for the rats to kill them. 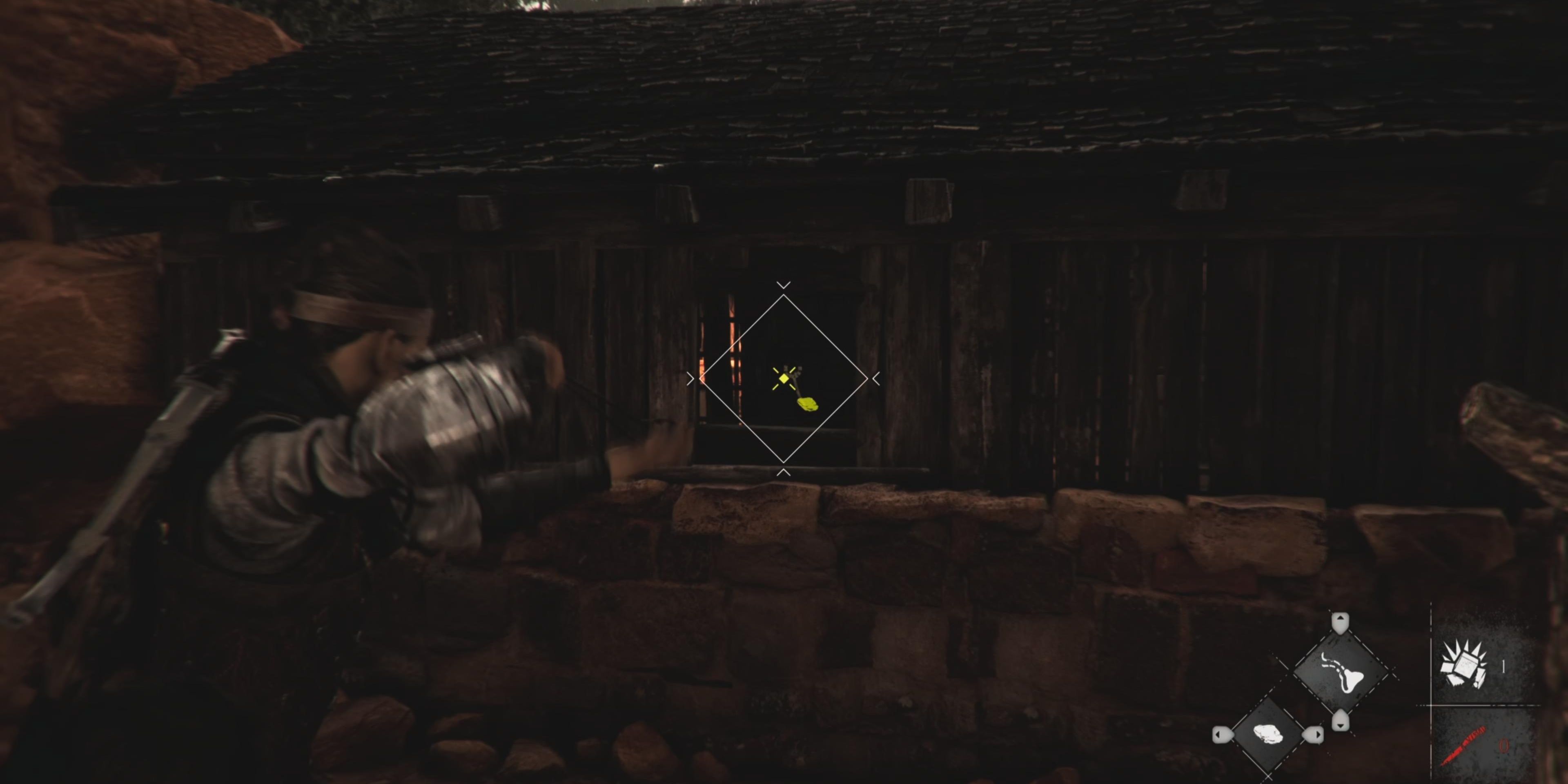 Utilize Amicia’s Crossbow and Exstinguis to eliminate any other guards, and head toward the house on the right side of the main path. Use Imperium to control the rats inside the house, freeing an area with a chest.

The door is locked, so swing around the back side of the house to break the latch through the window. Head inside the house to open the chest and receive Pieces, a Tool, and Sulphur.

Kill the remaining guards, or wait until they walk past you, and you’ll reach a door at the end of the path.

Before you enter, craft as many Tar and Ignifer as possible.

Tar will amplify the Beast's flame chain mace and stun him during battle.

The next area will trigger a boss fight against a massive armored soldier named the Beast. This giant foe swings a chain mace on fire, but this is where the Tar comes into play. Use a pot of Tar to amplify the fire on the mac and hit him with rocks. 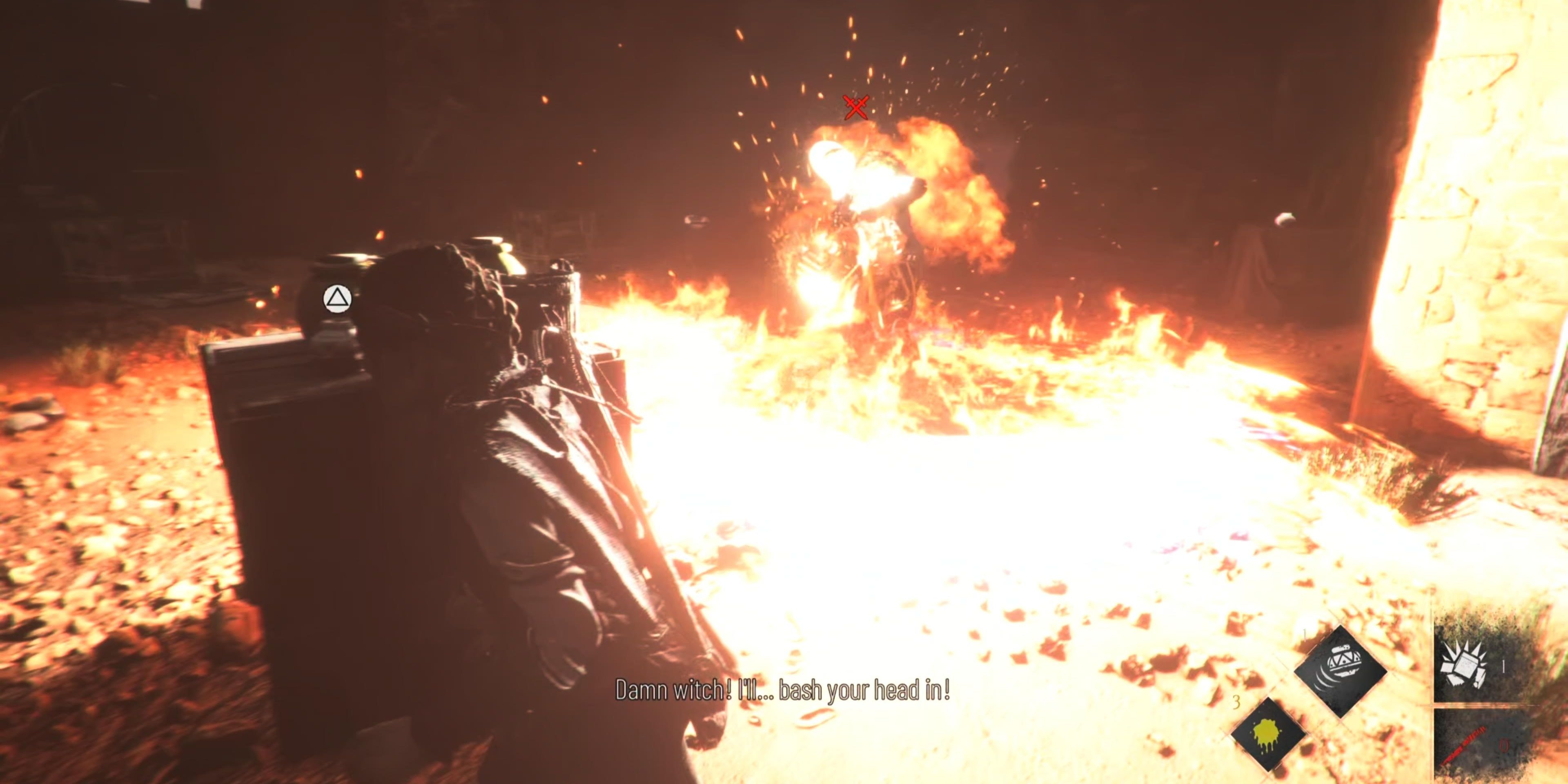 Run around the small area and continue picking up pots to mix with Tar to throw at the Beast. Pick up bolts as well, and keep alternating between throwing pots and firing bolts to weaken him.

If you try to use Exstinguis on the mace, the Beast will immediately relight the weapon.

Once more guards start to drop down from the upper wall, that’s a sign that the Beast is almost dead. After taking down the Beast, Hugo summons the rats, and you’ll control them again to devour the guards. Hugo will have another seizure, so carry the boy up the steps on the right and lift him up the ledge to safety.