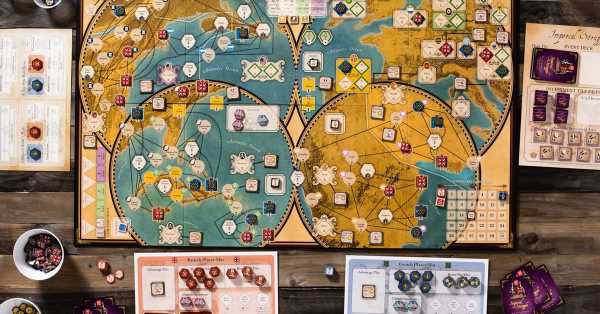 The tabletop renaissance has created a more diverse audience than ever before, even for niche genres like historical board games and wargames. Now a new mentorship program, led by a blue-ribbon panel of industry experts, hopes to diversify tabletop gaming’s cadre of designers as well.

Called the Zenobia Award, organizers say that the contest is open to anyone from an underrepresented (non-white, non-male) group, “including women, people of color, and LGBTQ+ people.” Three winners will receive a cash award and mentorship on their design from a lengthy list of industry experts.

The selection panel includes well-known academics, journalists, and tabletop influencers, as well as some of the best designers working in the field today. Fans of the genre will recognize panel members Jason Matthews, co-designer of the legendary Twilight Struggle; Volko Ruhnke, creator of the COIN Series of counter-insurgency wargames; and Cole Wehrle, creator of Oath: Chronicles of Empire and Exile.

But the real draw here are the eight finalists, who were revealed on Sunday. Their game proposals include some truly fascinating stories, all rendered using some of the most sophisticated modern board-gaming systems available.

During Indonesia’s struggle for independence, manage your school, graduate girls from different islands as politicians, fighters, patrons, or teachers, advance education for women, and fight for the nation’s freedom.

Play as enslaved Africans and Maroons (escaped slaves) fighting for abolition and equality against the French colonial government, slave owners’ militia forces, foreign armies, and even the environment of the island itself.

Work together as gender-defying queers to meet in secret in London’s molly houses, plan molly house events, and create joy in the face of opposition by the Societies for the Reformation of Manners, informers, and the risk of arrest.

Orange Shall Overcome! by Marcel Köhler

Use teamwork and make the personal choices of characters based on real-world members of the resistance against the German occupation of the Netherlands.

The Season by Lauren Ino

As head of a landed gentry family during England’s Regency era, manage the activities and education of your households’ young ladies while maintaining their reputation, health, finances, marital status, and skills.

Tyranny of Blood by Akar Bharadvaj

Indian Caste System under British Colonialism: during the rise and fall of colonialism and ensuing social displacement, shape the nation-state to your caste’s advantage with its own actions and paths to victory.

Historians have argued for decades over the function of Machu Picchu, swayed between re-examined evidence and charismatic historians building elaborate myths. Explore this enigmatic wonder and challenge your perception of history.

Winter Rabbit by Will Thompson

Explore a pre-Columbian economic system based on reciprocity and community need rather than supply and demand. Prepare your Cherokee village for winter as a trickster Rabbit of Cherokee lore disrupts your work.

Every one of these games sounds like something that would be stunning on the table, but only three will win an award. These eight finalists were drawn from 46 proposals, and the winners will be selected by Oct. 15.

Those three will then be taken under the wing by the awards’ list of mentors. With luck, that game will then be picked up by one of the several top-tier publishers partnering with the program, including Academy Games, GMT Games, and Osprey Games. You can read more on the official website.