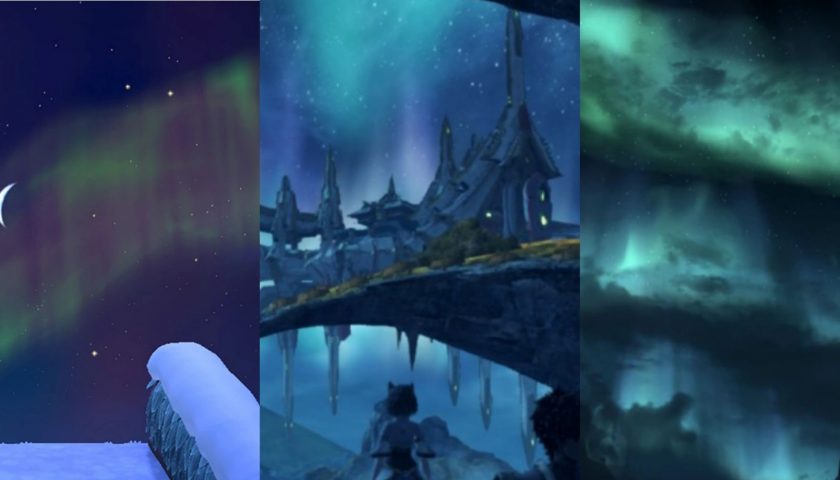 The northern lights, also known as the aurora borealis, are a natural light phenomenon caused by the sun’s particles. They can often be witnessed in the northern regions of the planet and are characterized by their colorful patterns that light up the sky at nighttime.

Due to the beauty of this environmental display, it’s not surprising that many games have chosen to utilize it to add some extra flair to their landscapes. If you ever find yourself playing any of these games, it’s definitely worth seeking out the northern lights to see them for yourself, as even in video game form, they’re beautiful and awe-inspiring.

8/8 Well I Sure Hope It Does: Northern Lights 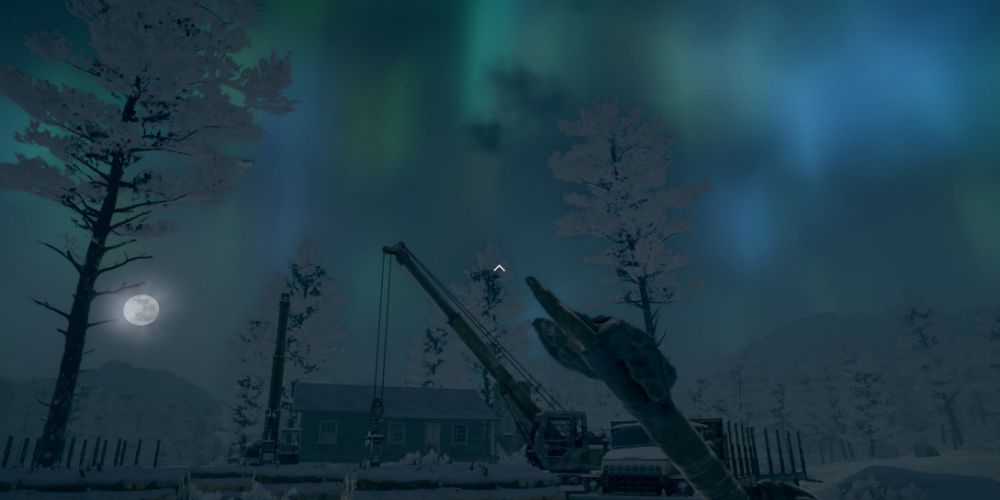 As the name suggests, the northern lights feature in this video game that has you surviving in the harsh wilderness of Siberia. You must use your own wits to forage and hunt survive the tundra. The icy environment of the Siberian wilderness is as beautiful as it is terrifying, which this game captures.

On some nights, it’s possible to see the northern lights illuminating the sky, which is a welcome sight as you trudge through the icy landscape with nothing but surviving until the next morning on your mind.

7/8 Wonders Of The World: Skyrim 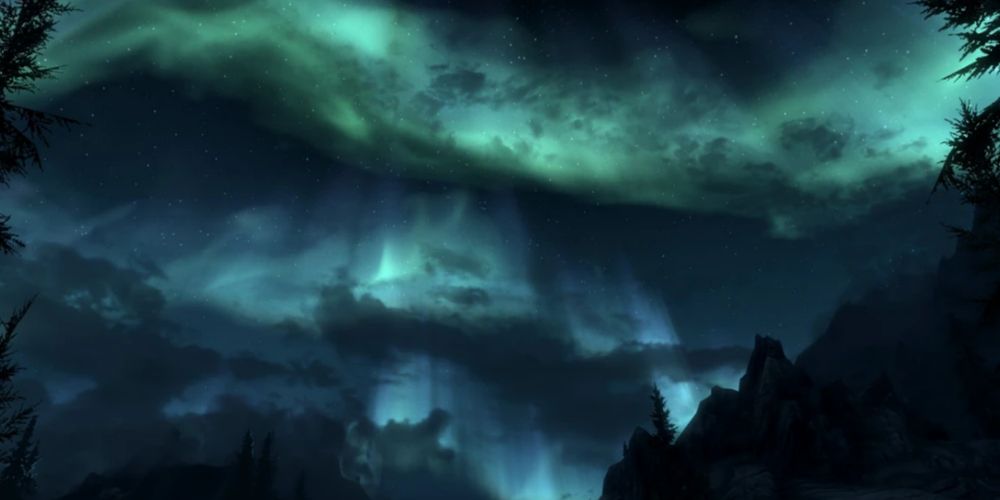 Due to Skyrim’s open-world nature, there are countless things to discover that will lead you to put hundreds of hours into the game, including discovering hidden lore details and interacting with each of the NPCs you meet.

Skyrim also has lots of environmental details to discover – one of which is the northern lights, which can be seen from certain locations in the game, such as the Forgotten Vale and Solstheim. The aurora can be seen in different colors – purple, orange, green, and blue – and is a rare occurrence you’ll want to look out for. 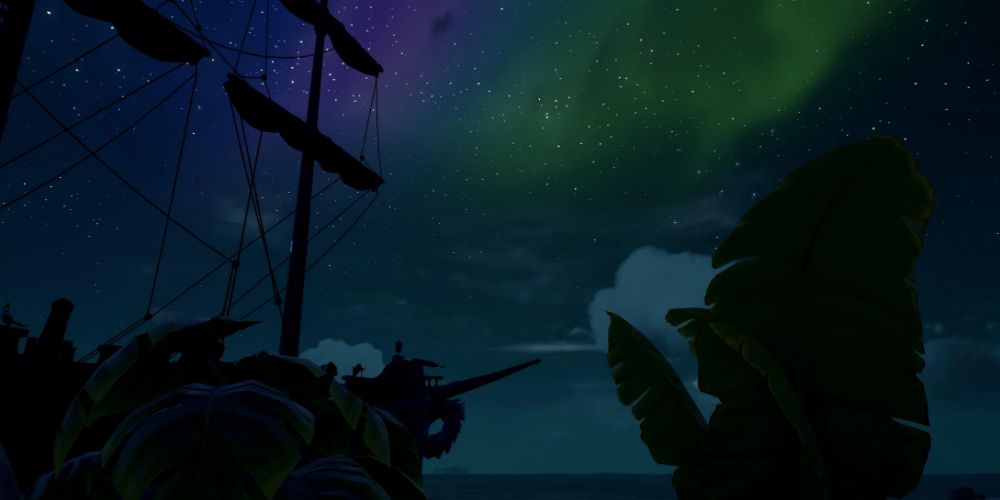 In the multiplayer game Sea of Thieves, you and your crewmates sail across the sea in your very own pirate ship, allowing you to live out your dream of being a pirate, whether you search for treasure or commandeer rival pirate ships.

Seeing the northern lights is a quiet reprieve from the more action-packed aspects of the game. In between looting enemy pirates, you can enjoy a peaceful moment watching the aurora borealis. There are even sets of clothing and ship parts in the game named and designed after the aurora, letting you travel in style.

5/8 Worth The Climb: Celeste 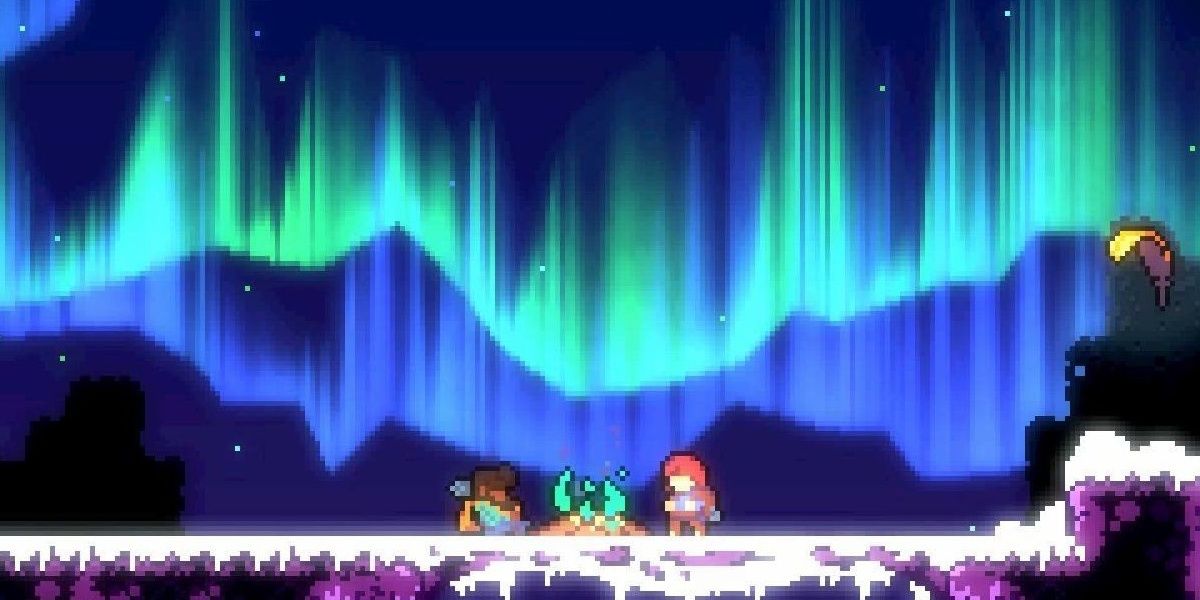 In Celeste, Madeline is determined to reach the peak of Celeste Mountain despite the obstacles and dangers that she encounters along the way. At the beginning of chapter six, the northern lights are visible as Madeline scales the last part of the mountain; Madeline even comments that they’re “so beautiful.”

The northern lights being visible on Celeste Mountain makes sense, considering that it’s located in Canada, where you can often see the aurora borealis. Sadly, you can only witness the northern lights for a short moment in the game. Still, they add to the emotion of the scene as Madeline confronts her insecurities manifested as Badeline.

4/8 More Dangerous Than It Looks: The Long Dark 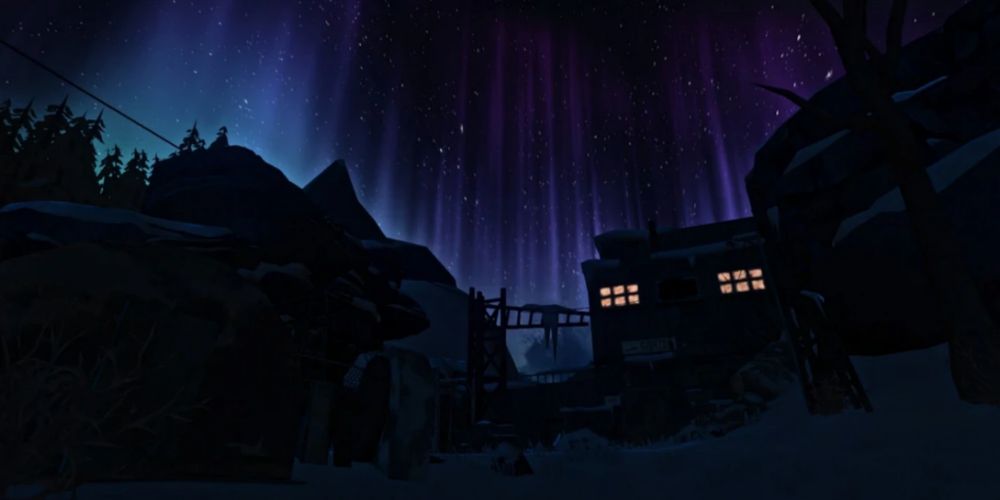 The northern lights are important to both the story and survival modes of The Long Dark, and they can be seen in the sky at different times throughout the game. Unlike other games, where the aurora borealis is a pleasant sight to behold, in this game, it spells danger despite its beauty.

Within the game, the northern lights are referred to as the aurora and are the cause of many of the mysterious occurrences happening in the game, such as technological anomalies and aggressive animal behavior. You won’t be able to stop and admire the aurora, as you’ll need to be on the lookout for hostile wolves and bears. 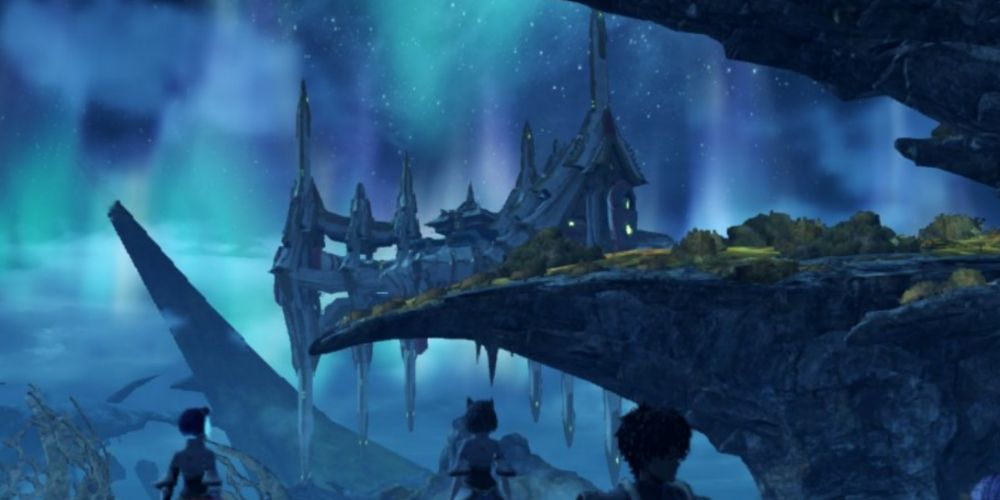 One of the latter regions you visit in Xenoblade Chronicles 3, the Cadensia region is home to Erythia Sea, which the party has to travel across in order to complete various quests on their journey. There are lots of secrets to discover on each of the islands located within the sea, making the journey between them worthwhile if you’re a completionist.

If you travel Erythia Sea at nighttime, it’s possible to see the northern lights. You might want to take the time to get to a higher vantage point to see the aurora borealis in its full glory as it glows against the night sky. Xenoblade Chronicles 3 is up there with the best-looking games on the Switch, and its rich environmental designs only add to this quality. 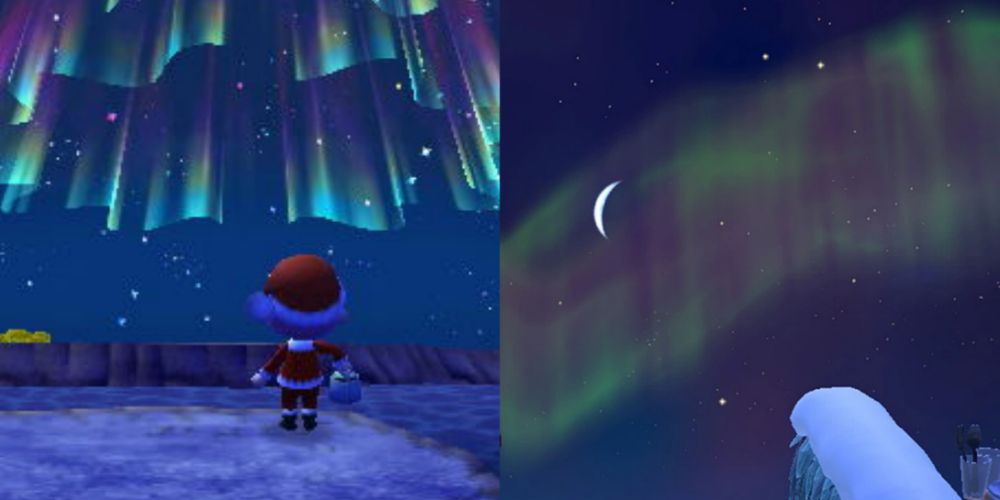 In the Animal Crossing series, time functions the same as in the real world, meaning that the seasons change depending on the months of the year. The months have different in-game features, including special events and weather effects.

On clear winter nights, when it’s not snowing, it’s possible to see the northern lights above your town or island. As this is such a rare occurrence, seeing the aurora in Animal Crossing is a special moment to share with your villagers. In some instances, your villagers will even comment on the aurora borealis, enjoying the spectacle alongside you.

1/8 A Breathtaking View: The Legend Of Zelda – Breath Of The Wild 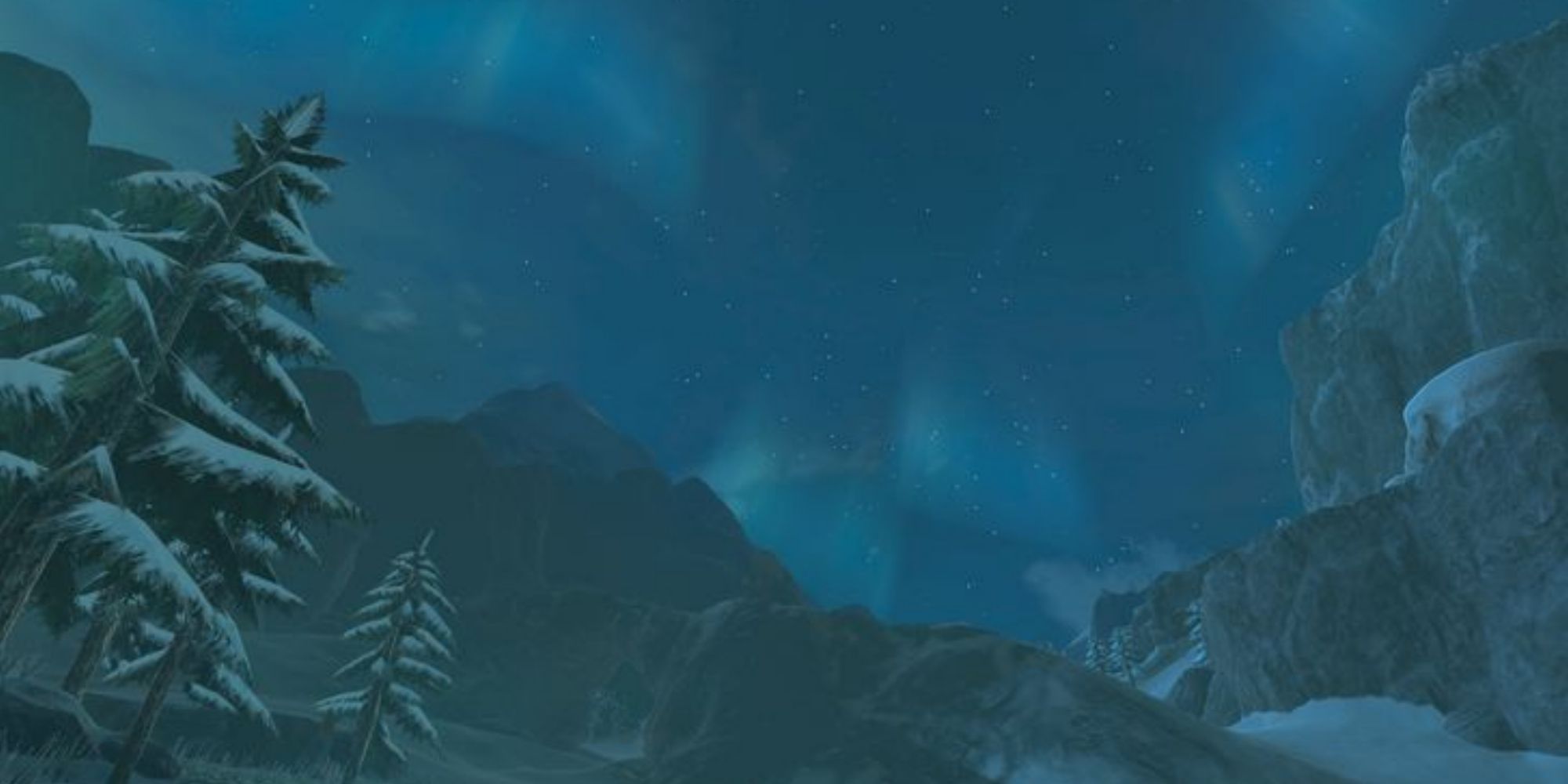 Breath of the Wild has many tiny details that are possible to miss on a first playthrough, including rare occurrences like the northern lights. On certain nights in the Hebra Mountains, it’s possible to catch a glimpse of the aurora borealis illuminating the snowy landscape.

You might want to get the Sheikah Slate out to take a picture when this happens, as it doesn’t occur very often. Breath of the Wild has lots of scenic views for you to experience, such as the sunset on the ocean at Lurelin Village and Silent Princess flowers blowing in the breeze in Hyrule Field. But the wintery landscape of the Hebra Mountains, paired with the northern lights, is one of the best examples of the game’s breathtaking environments.