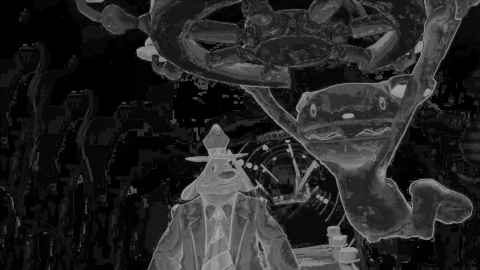 Save for a pair of plumbers, gaming duos don’t get much older than Sam & Max.

Though they may have started life in the pages of comics, multiple virtual adventures across nearly three decades have cemented the pair’s position as lovable, if often overlooked gaming mascots. After playing the first hour or so of the game, Sam & Max: This Time It’s Virtual looks like it might do right by the series’ legacy with a refreshing sense of humor and enjoyable, varied puzzles. Here are four things we love about the game so far, and a look at what could be improved. Oh, and check out the opening gameplay in the video below, too.

At their best, Sam & Max adventures are genuinely funny affairs, with Max’s sharp, near-psychotic one-liners bouncing perfectly off of Sam’s innocent, overly-elaborate word jumbles. When they’re not at their best, the fast-fire attempts at humor can stretch thin fast. Fortunately, what I’ve played of This Time It’s Virtual so far sits firmly in the former camp – the script is on-point and unpredictable, and Max’s erratic short man syndrome works to great effect when he’s jumping on top of you and zipping around the environment.

Happy Giant is working in some great physical comedy, too – at one point Max wants you to throw him at a dartboard, and there’s a pretty fantastic puzzle involving the decapitated head of a robotic Thomas Edison ordering you to ‘Boop Me’ and ‘Twist Me’ among other, less repeatable phrases.

About an hour into the game and I’ve already done a lot of different things in Sam & Max: This Time It’s Virtual. I’ve defused bombs, scaled climbing walls and made Max a corn dog, and that’s just in the first few areas. The game feels like a VR variety hour, in constant search of something engaging and/or amusing to interact with. None of those interactions are especially evolved — reloading a gun requires just holding a clip near it and throwing darts is heavily automated — but these tasks are often over before you start to tire. I’m really looking forward to seeing what other strange ideas Happy Giant cooks up in the rest of the game.

My biggest fear for Sam & Max: This Time It’s Virtual is that it would be too hard, and that I’d quickly grow frustrated with obscure puzzle solutions that had me randomly trying the most illogical things in desperate hopes of progressing. So far, that hasn’t been the case – its first puzzles are a gentle introduction that often focus more on fun interactions than they do trying brain-teasers. As we saw at the Upload VR Showcase last weekend, more puzzling challenges await but, hopefully, it’ll continue to maintain this delicate balance.

One thing that never really tires for me when it comes to VR is meeting new characters. There’s that weird moment of genuine confusion as your brain tries to establish if you’re actually talking to another living being or not. Sam & Max might be cartoonized critters but that feeling is still very much alive and well here. The first time you meet the titular duo is quite striking – especially if you’ve been a fan of the series in the past.

You might have assumed this from some of the trailers for the game over the past year, but This Time It’s Virtual is just a little rough around the edges in a way that’s tough to put your finger on. Visually its cartoonish art style looks great in VR, even if textures are on the blurry side on Quest. But, from what we’ve played, it’s more about the little things – the times you notice Max is levitating off of the floor by a few centimeters, the general weightlessness of any object you pick up, or when you realize the pair popping out at an angle behind a wall is really just their character models inexplicably hovering in mid-air. None of this is deal-breaking stuff, but it is a little on the shabby side. Crucially, though, these are all the sorts of things we expect and hope Happy Giant to be tackling in the final weeks leading up to the game’s launch this summer.

If Sam & Max can keep this light-hearted, fleet-footed approach to VR puzzling fresh throughout the entire game, then Happy Giant will have done right by the series for sure. We’ll find out when the game launches first on Oculus Quest later this summer, though PC VR and PSVR ports are due, too.